With this deck you can easily start playing Gwent and win even with three cards short.. Since most players act like robots in the same way, they can't even imagine such a loss.

What is the essence of the deck
I will not write down which cards to take, how much to spend food and meticulously write out what to play in a particular round. We've got a deck of fun, deck of adrenaline and surprises, we go all-in and take the jackpot.

The main task is to craft or knock out a card called “Mahakam Horn” elf faction. She has a unique mechanic - even though it's a trap, but works AFTER, as the enemy escaped, giving neighboring units +4 points.

Logic: in the first round you must win. Put anything in the deck: warriors, spells, artifacts - it doesn't matter. the main thing, win the first round even at a negative price 3 Difference Cards with Opponent. In the second round, your task is not to burn the office, hold in your hands the most beautiful cornucopia’ and lay out when the cards in your hand run out. At the end of your turn, you must have LESS points, than the enemy and remain ZERO cards. Or you can save earlier, when you have one or two cards in your hand, the main thing, place a horn between any two fighters and pretend to surrender. 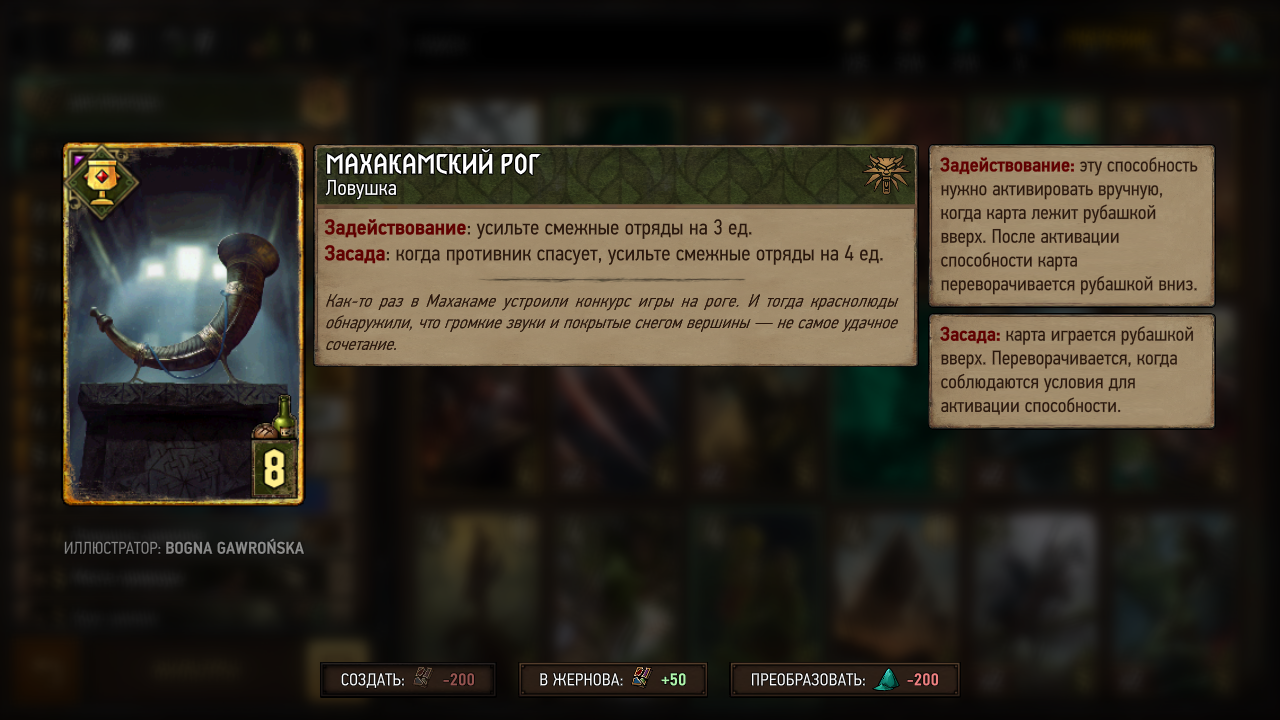 What it looks like from the enemy's point of view
You are a fool, who lost as many as three extra cards to win the first round. Now the second round is in progress, you have 20 points and zero cards in hand, at the enemy 23 points and three cards in hand. He must win this round., but does not want to spend extra cards. Through leadership in 3 points, he will press the pass button without further hesitation, to trample your face in the third round and spam the taunts victoriously. In addition, you just laid out a strange trap on your deathbed, he will NOT want to lose one empty card to disarm the trap. Also, no player wants to be wasted TWO TIMES after an enemy pass., no one does it stupidly and never, but the action itself is counter-productive and illogical.

What's next? And then the horn is activated and floods you +8 points already AFTER the enemy pass. There is absolutely nothing he can do about it., no countermeasures. He has three cards in his hand, but the game is LOST with a score 2-0.

You see, Gwent players have developed some robotic thinking system. Save maps, pass the second round, be careful, do not spend too much. These ideas are so deeply embedded in my brain, that changing the way of thinking would mean voluntarily reducing the chances of winning. And this should be used to the fullest.. Lay down one enemy after another with a single card and go from rags to riches.