Unfortunately, the game is so raw, that can't even explain to the player, what is required of him. In this guide, I will briefly outline the most painful moments for you.. I have suffered, so you don't have to. The guide contains screen shots of colored vomit and swearing a drop. There is no other way to describe this game..

What kind of game is it? 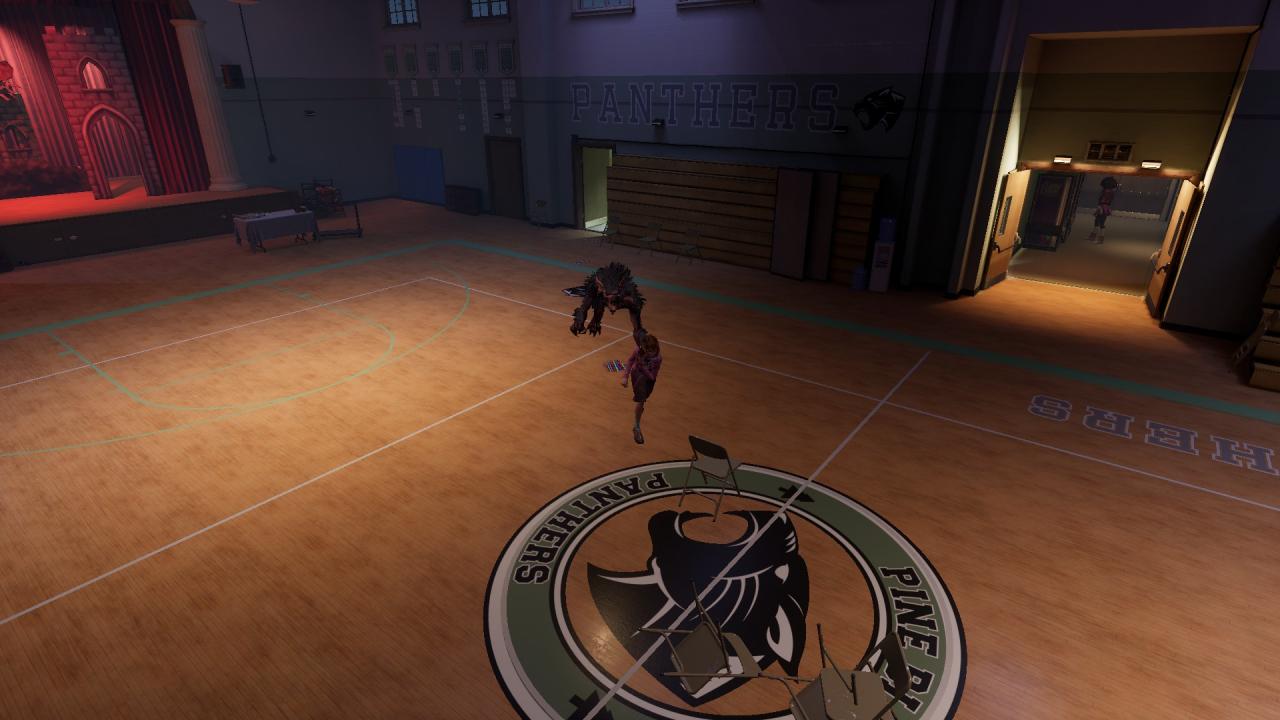 The game page assures us, like this “superb horror, straight out of the eighties”.

maybe, I didn't watch those “horror from the eighties” (and I watched the first part “Nightmare on Elm Street” and the first three “halloween”, to start). But the game has nothing to do with them.

In the classic horror films of those years:

In this game too:

You think, this is another dastardly clone of Dead by Daylight, where one killer entertains four survivors?
Nikuya.
This is another incarnation of the stillborn Deathgarden Bloodharvest, brake mixing 1 vs 4.
Why post-shooters 4 vs 1 with such stubbornness they try to pass off as “horror” – I don't know.

And if only this…

What you need to know about the game before launch? 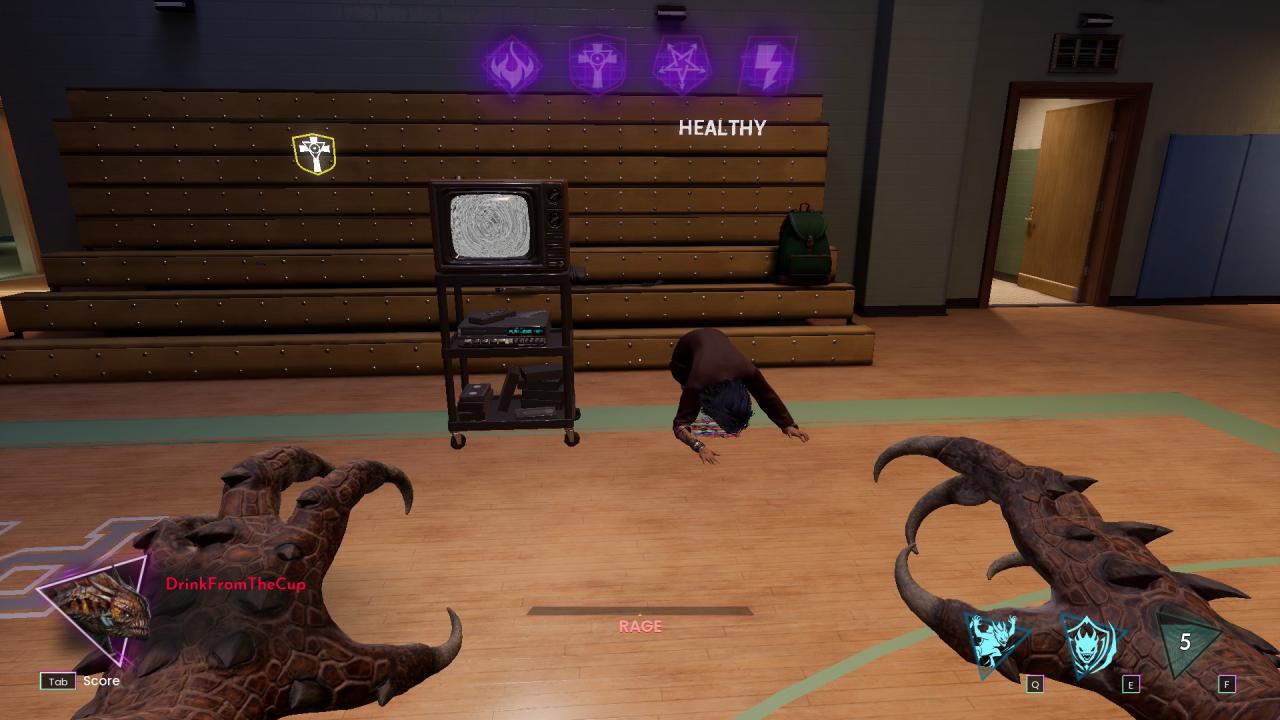 Briefly about the most painful and / or important points: 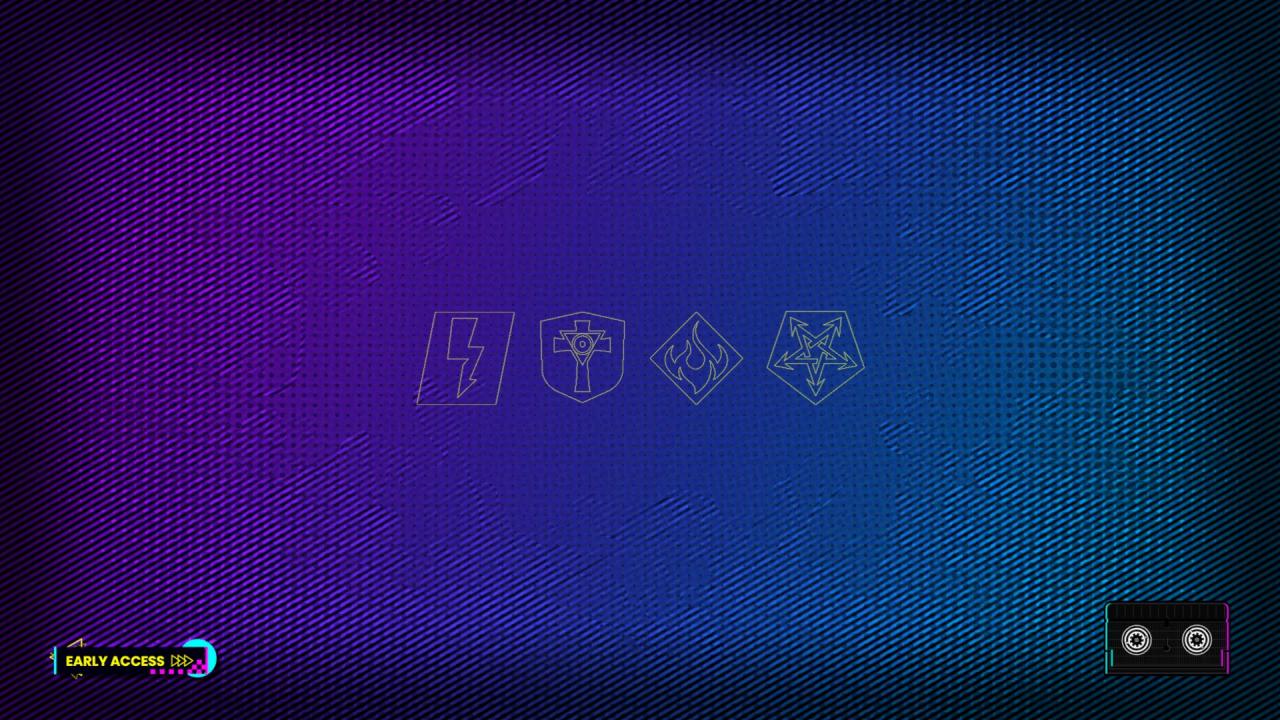 See this rainbow bullshit? This is the in-game tutorial loading screen.
The joke is, that until you click something, You will continue to stare at the loadscreen.
Not, this is not a game stuck. This is some donkey forgot to add the inscription Press Any Key To Start Tutorial.

At all, UX is here… how in “tanks”, if you understand, what am I talking about. 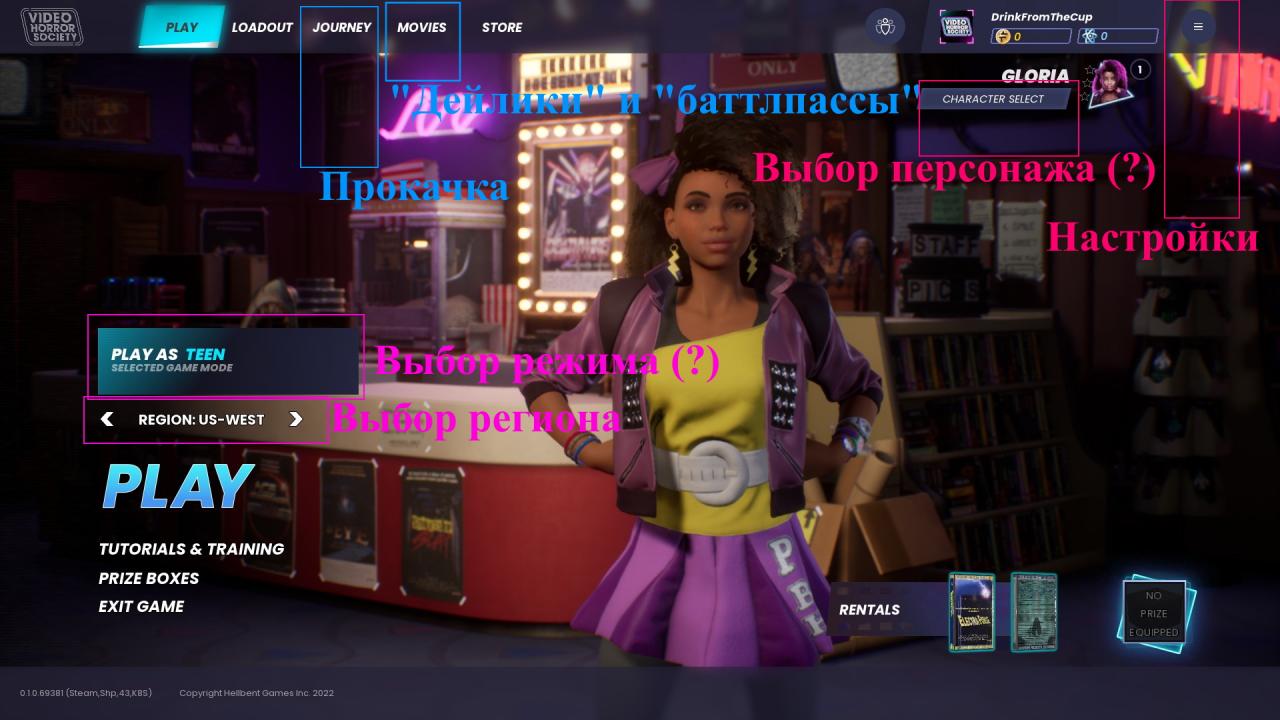 I dared to be a mobile basturma basturmatorskaya – but someone decided to release on PC first, not otherwise.
But now you know, where to find settings. And how do you even get anywhere?.

Further.
For some reason, these developers do not know, that there are 75Hz monitors. Between 60Hz and 120Hz there are no intermediate options.
It is treated by setting the storyboard to Unlimited and turning on vertical synchronization.

Before, how to go play with real people, don't forget to do the following.
1. Go to Loadout, choose brighter or darker clothes in each slot, taste. The choice of dressable character is hidden in the upper right.
2. Go to Movies, in both sections select by movie. Movies – these are our quests.
3. Return to play, select the desired server.

What to do in the game itself?
Nothing special.
A monster – drop all other players with their noses on the floor, as I understand.
Not a monster – while in the background there is a monster ♥♥♥♥♥♥♥♥ of an unlucky partner, craft four weapons of different elements and shoot them all at the monster. Each one at a time. 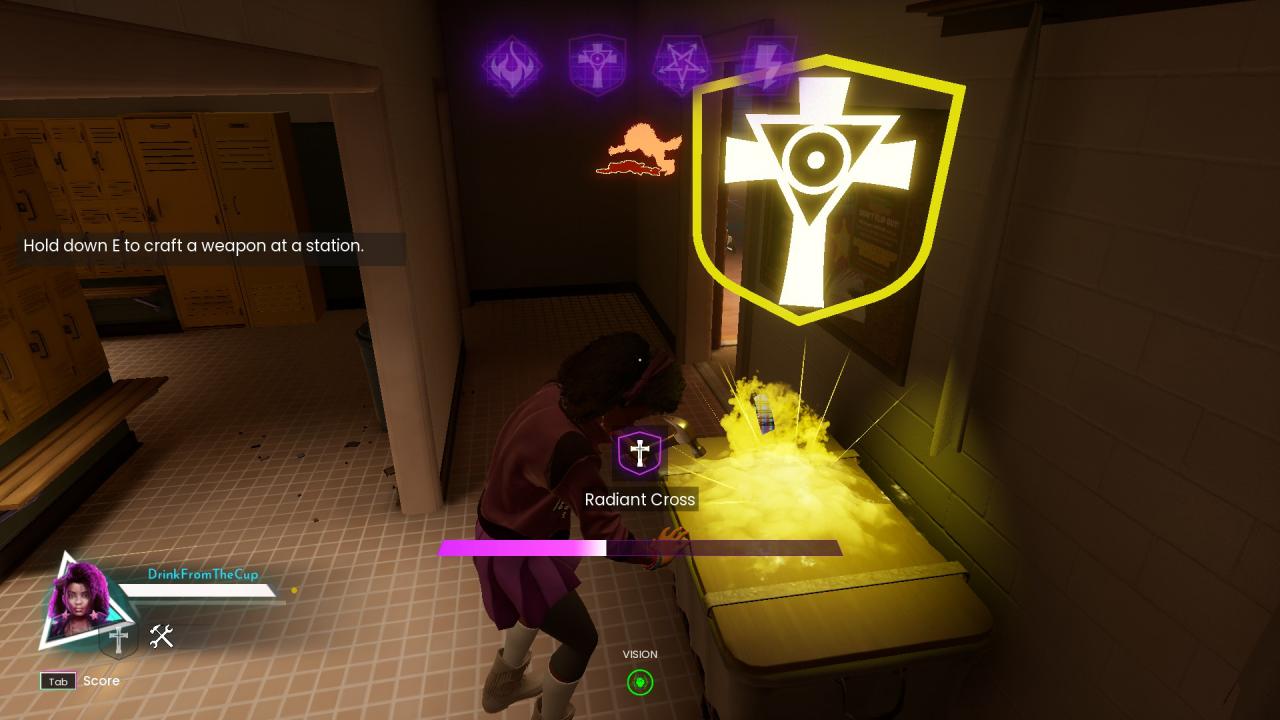 Craft – like generators in Dead by Daylight. Except that, you need to shoot a monster with a crafting product.
Treatment for non-monsters – also almost like in Dead by Daylight. Except that, on the map there are wild-growing wall-mounted first-aid kits, which can be treated without outside help.
Boëvka and respawn for monsters – more like in the late Last Year: the Nightmare. Looks very. I'm looking for tickets, materialize as one of the three monsters. Occasionally spawn like a trap.

Non-monsters are no different from DBD Survivors, except that their keyboard layout is a little more sane, and skillchecks are much more flawed. You will see for yourself… if you want. 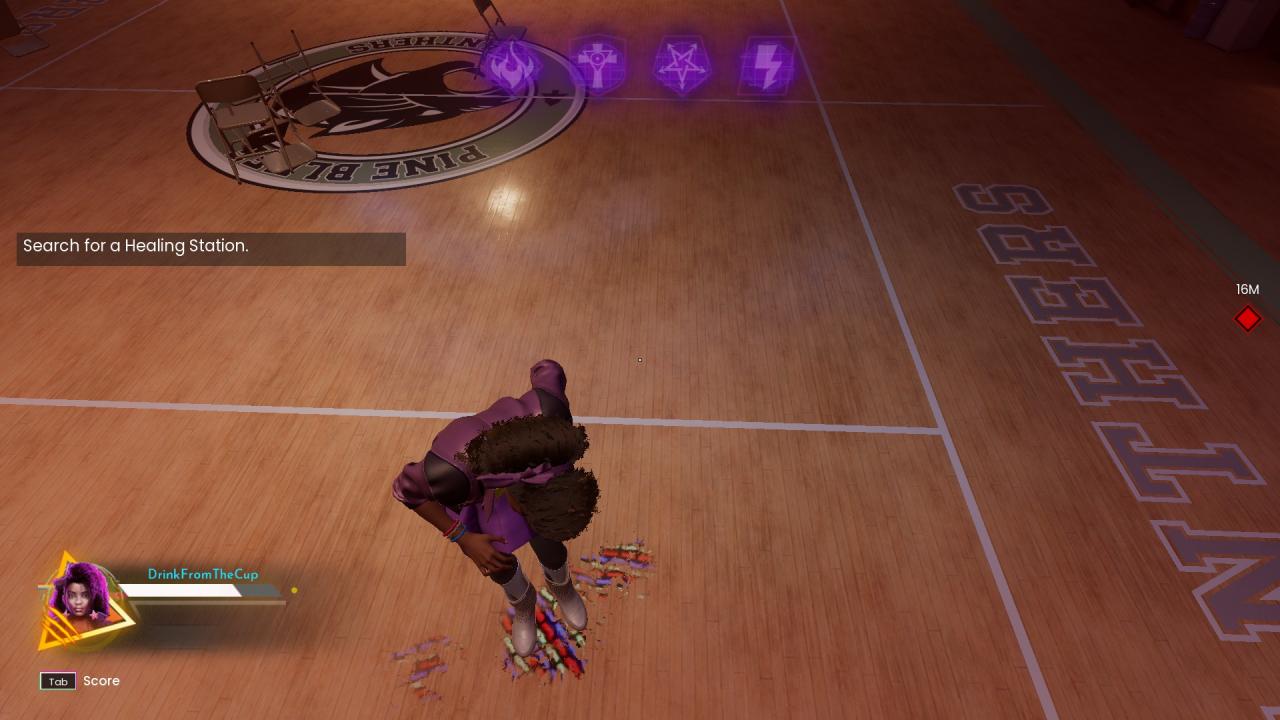 Werewolf sniffs well and knows how to crowd control.
The puppeteer spawns a type of trap in the form of dolls, in which it can move.
Yashur is able to jump and jump armor.
All monsters can respawn.
The variety and color of monsters from LYtN is far away, by the way… there “people” from “pervert grandfather” differed like a finch from a woodpecker, gameplay changed VERY depending on the choice of the monster.
There is no smell of variation here yet.

Gameplay… extremely lethargic, actually.
For the monster, we are trying to control the benches for crafting weapons and drop that enemy, who was able to craft at least something. Or “breed” him for wasting weapons (ran out of ammo – craft from scratch, craft for a VERY long time).
For non-monsters… genrush, anyone?

Coupled with the open pride of the developers about the availability of the so-called Pride content, prospects for the game… rather disappointing.

But with my guide, you now at least know, what to do and what to avoid.