so, dear reader. Since you got to this guide, then most likely he has already closed many achievements and rested on the very, from my point of view, complicated. But with the right approach – it may only take a few hours. Let's not delay the introduction…

“Madness” assumes non-stop reflection of waves of opponents with maximum efficiency.
Briefly about the most important mechanics for this achievement – new waves icons (as well as the opportunity to fight with them) appear after the end of the current (if suddenly she appeared during the reflection – you can restart the race, you will not meet the time). 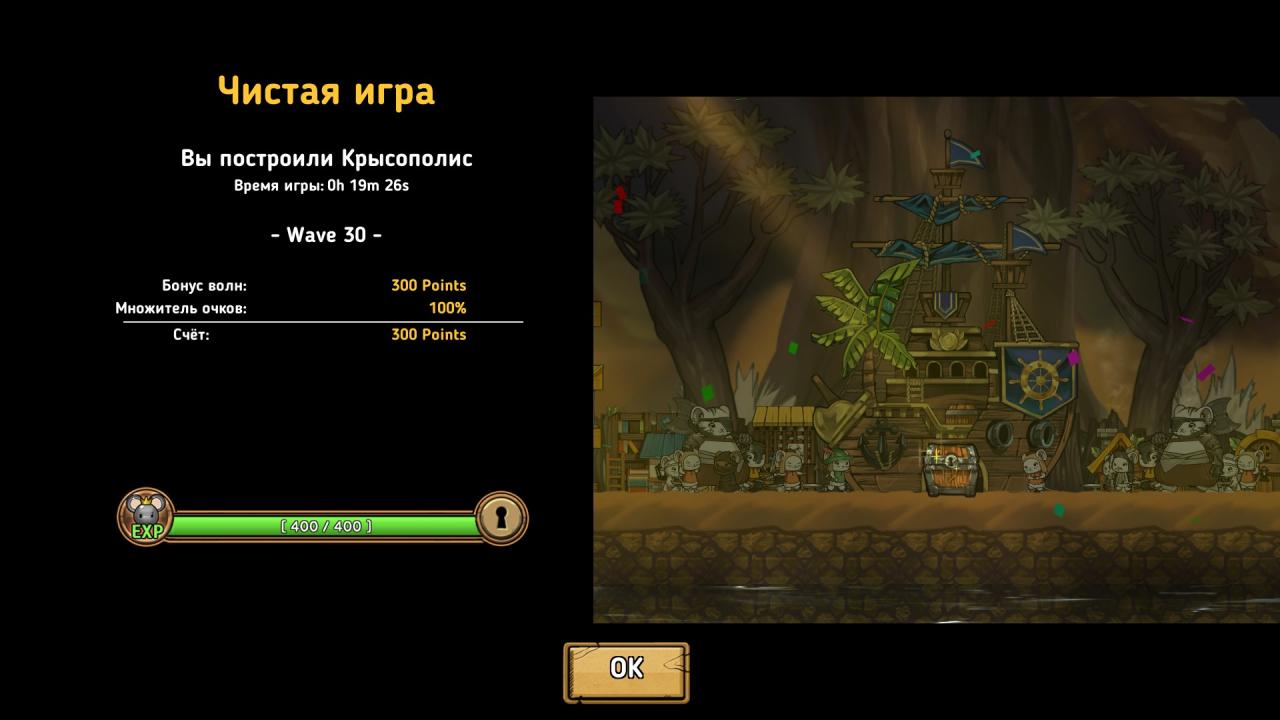 The game plan appears as follows – create superstrong “Treasure hunters” in sufficient quantity.
For this we need the following:
1) Acceptable economy – any normal card for labor + “Robbery” + offline map for gold, eg, “Pottery” + opportunity to reduce publicity – i used “Restore”, which nullifies it completely.
2) Cannon fodder to begin with – “Pirates”, which are small things at first, but over the course of the game they turn into meaty tanks (dear, sure, but for the most part they will be the main item of our budget)
3) Mid-game DPS and population growth – some “Black beards”, and “Immigration” / “Offspring” (although no one forbids combining them)
4) To find “Treasure hunter” up to the 10th wave. Complicated? Yes, what did you want for the hardest achievement in the game.
5) To find “Raise sunken treasures” – the closer to the moment, when you find “Treasure hunter”, all the better. Ideally – with a gap of no more 5-7 waves.
6) (Optional) To find “Captain” before the 20th and higher waves. This will allow us to deal with all elite waves without the slightest problem., including the boss.
7) Carefully alternate economy with chests – to clean the deck, as well as replenishment of gold reserves.

Now about the buildings…
It's actually pretty simple here. – the more opportunities we are given to recruit rat dwellers – all the better. By the end of the race I had 12 houses, rabbit garden.
What's useful (no more 3):
1) “Library”. The more cards in hand, the easier it is for us “twist” deck
2) “Lighthouse”. Similar to the library to a greater extent.
3) “Watch tower”. To start the game, as always – just right.
4) “Fishing grounds”. If you feel, that today is your lucky day – you can try your luck looking for “Workshop”. It reduces the duration of all labor cards by 5(8 when upgrading) seconds, what AFFECTS “Raise sunken treasures”, which in theory allows us to lift chests almost instantly (when upgrading treasures – labor lasts 10 seconds)
5) “Pawnshop”. Just like “Watch tower”, to start the game will help us keep the balance of funds, especially when buying cards from a merchant.
6) “Market”. It can also be useful for finding the above maps.. But, given the duration of the race – it is better to take only in the early game. Then it will just be rather useless.

Advisors. They also have a huge impact on the game.. Next, I will show the most cherished and necessary for passing. The rest are almost equally of little use..

1) Captain. With him we start all the races. Passive ability (-1 second to discard cards for each previously discarded) will help, when we have a lot of junk in our hand, but we shouldn't have it, so we don't really rely on it. However, the bonus is nice.
2) Boss. Mast hev. Gives +1 to max. HP unit for 2 fame on it. For “Pirates”, “Treasure hunters”, “Black beards” – a ton of extra health. If there is an opportunity to take it from the event – be sure to take it and don't think about anything.
3) Jailer. Thanks to it, the price of the card increases by only half the value of the fame. A very good addition to the boss. Our rats are fat and cheap, what could be better?

Continuing the list of desirable advisors.
1) Economist. An advisor to start the game. Upgrades all economic cards in the deck (but new – not). Gives a very good ramp for money at the beginning of the game.
2) Quartermaster. Best caught mid-game. Reduces the cost of military cards by 25%. Also, like the jailer, helps with a modest economy to create a huge armada.
3) Blacksmith. Universal, good no matter how you look. Increases the attack power of all rats by 25%. Although in this strategy at the end of the game, his contribution becomes less, but he is still an extremely useful advisor. Give – take.
4) Assistant. It seems almost the same, as the blacksmith, but worse. Increases the HP of all warring rats by 25%. In this strategy – if your rats started dying from lack of hp, this can be compensated by the amount of money in the tanks (“Pirate” for 400-500 goldy – norm).
5) Commander. Most useful for starting the game. Gives +2/+8 all battle rats in the deck. Closer to the middle and end of the game, it ceases to be felt.
6) Barbarian. MUCH better than the assistant at the beginning of the game and MUCH worse in the middle and end. Reduces damage from enemy attacks by 1. For understanding – the initial infected rat has a total 2 damage, a salamander (21-oh and after the waves) – 14-18.
7) Recruiter. Nice addition, especially for the start of the game. In each hand they put 1 etheric military card. Thanks to, that the Navigator has a bunch of maps with mechanics “Notoriety”, provides in fact free labor.
8) Latonosec. The thicker our faces, the fatter healed. At the end of each wave, heals the entire army for 50% from maximum hp. At the beginning of the game is weak, in the end – wonderful.
9) Settler. The more rats – all the better. Gives +1 rat dweller for each building built (including those, that are already built and those, what will). Perfect at all stages of the game.
10) Bride. To consolidate success. Reduces the leader's CD ability by 20 seconds. Since our main build is based on “notoriety” of little use, but if you hooked the optional “Captain”, this will help him give good bonuses to attack speed “Treasure hunters”, because they are not high enough, to cut out everything and everyone.
11) Bloodhound. Expert Advisor up to the tenth wave. Gives +1 a card to choose from when choosing new cards from chests. Will help you find the base of the build, but not more.

Hopefully, my guide will help you in getting the achievement “Madness”…

I myself have tried various approaches, from the merchant, to the builder. The last one turned out the closest – for about 24-25 minutes. Thanks to fire towers and watermills. However, my favorite Navigator (aka Sailor Leader) showed himself much better in this.

In total, specifically for this achievement, I had to spend about 10 hours (which was actually very hard, as it requires maximum concentration and attention to be successful)

Good luck with your attempts.. 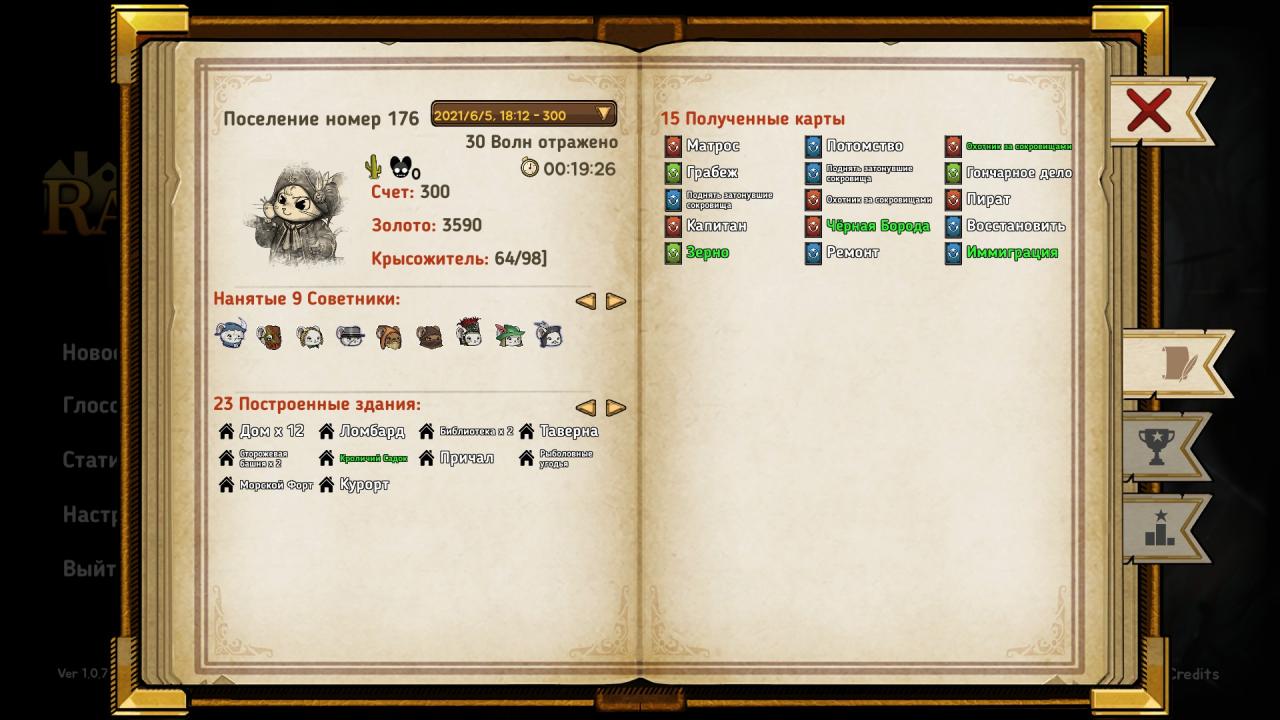