Trying to figure out, how this wonderful game works, I have not found a single Russian-language manual, so I decided to write my own, where I will describe the basics of gameplay and then, how the pieces move. (This is my first experience writing manuals.)

Most of the information in the manual is taken from an English source.
If you have sufficient knowledge of English, better to watch the video above instead of reading the manual.

I really like this game, even if I don't understand much about her, but in this, it seems to me, and her interest lies – learn something completely new and hopefully, that this guide will help you with this at least a little.

The basic rules of the game remain simple and unchanged – checkmate occurs when a player cannot prevent checkmate of at least one of his king.

Let's deal with 5 measurements, which is mentioned in the title of the game. 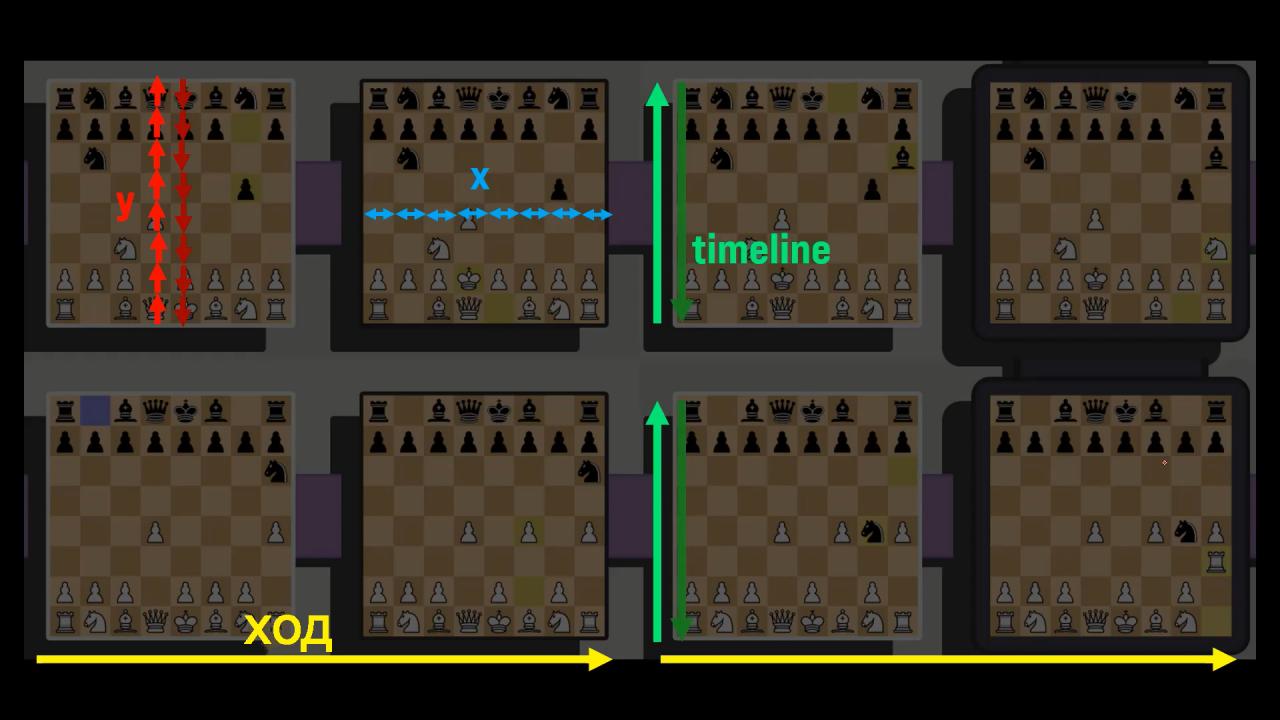 *The move of both players is considered one move..

How time travel works?
In fact, it is impossible to move into the past., since changing the past, the present is changing and any change can destroy everything blabby quantum physics… The point is, what with “moving a figure to the past” another timeline is created, branch from the main (cm. rice. below).

Here the queen is moved to the past and an alternative timeline is created.. (details about moving shapes in time and timelines in the next section)
Wherein, note, what the present (vertical line along the boards) moves with the moved shape.

Timeline
When white moves a piece to the past, “behind the figures” white, a new timeline appears, if black pieces move in time, already “behind their figures” timeline is created (cm. rice. below). (I understand, it can be difficult to perceive these complex pictures, everything will come with practice) 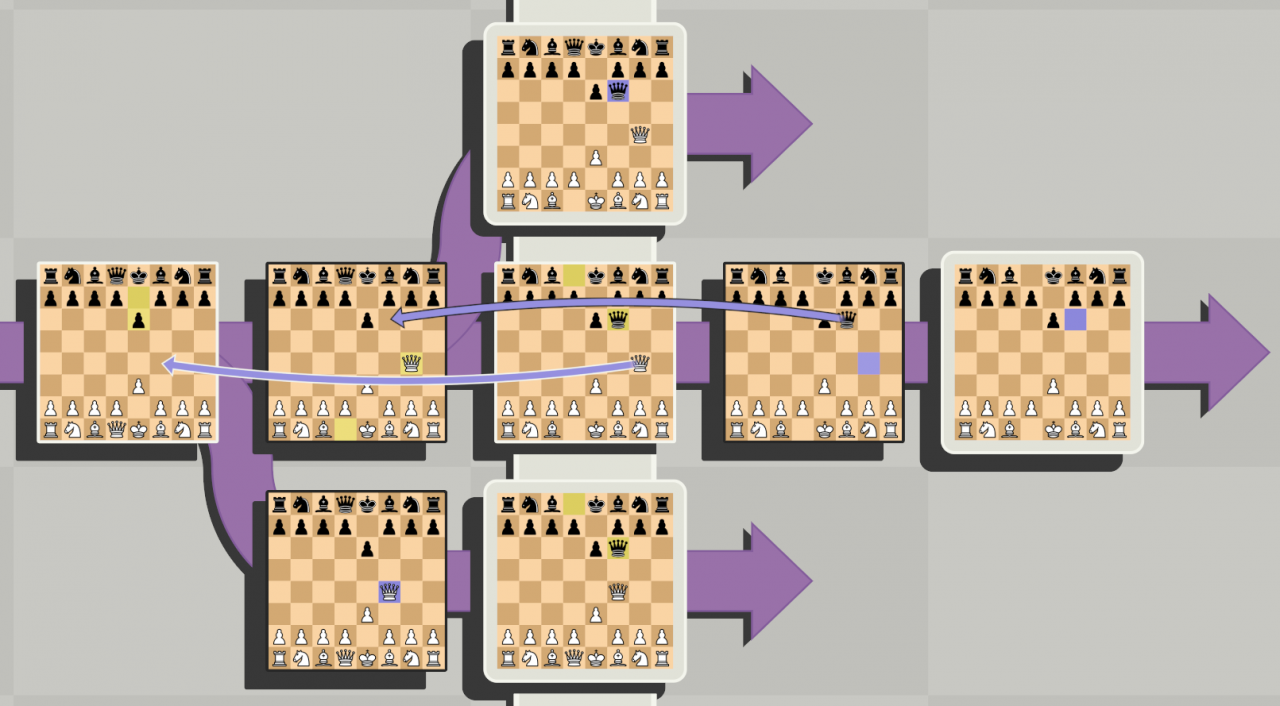 How the pieces move?

Within the X and Y dimensions, the pieces move in the same way as in regular chess., but when it comes to two new, everything starts to seem complicated, scary and incomprehensible, but everything is pretty easy. The principles of moving figures in time and by timelines remain the same..
Rook

Обычно ладья перемещается на сколько угодно клеток по горизонтали or вертикали (only in 1 measuring). It's the same here, in other words, the rook can only move in 1 measuring (on X / Y / time / timeline) for an unlimited number of units. 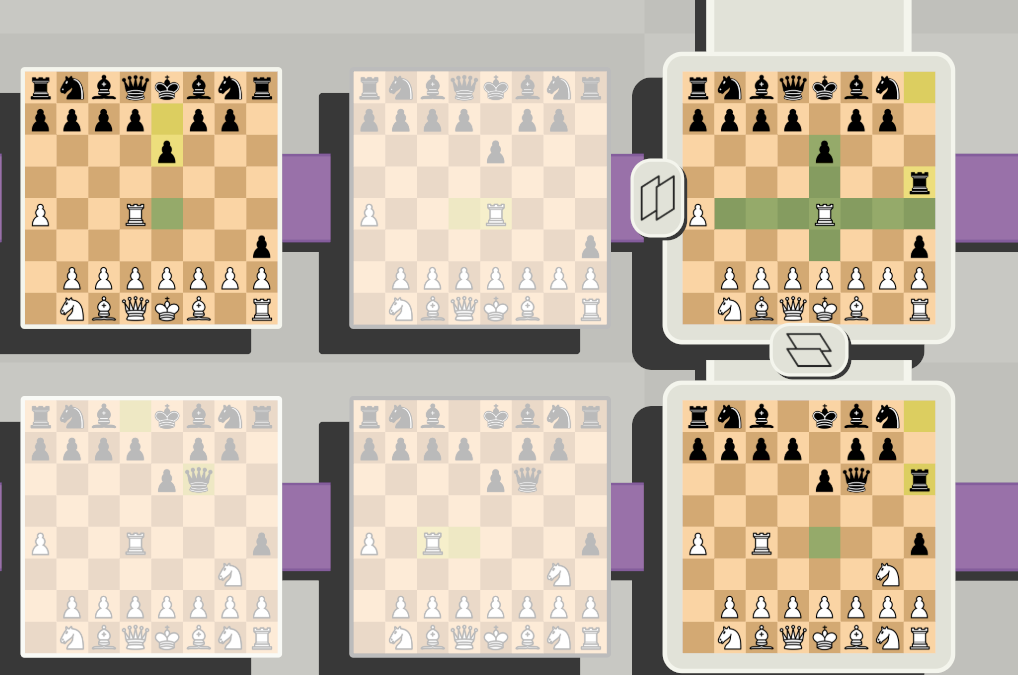 Here the selected rook can move to the previous turn or to another timeline, but at the same time on the board it remains in the same position, since the rook is already moving in one dimension and cannot move in the plane.
(By the way, by clicking on the icon near the board, you can view all the boards and cells on them, to which the selected shape can move)
Elephant

Король может перемещаться на 1 unit in 1, in 2, in 3 or in 4 measurements.
Horse

In the usual understanding of all people, a horse moves with a letter “D”, this is the same as moving to 2 cells in one dimension and on 1 a cage in another dimension.
On foot

Pawns can move on 1 (or 2 units if they haven't moved yet) only in 2 directions – forward by Y and by timelines (this is where the knowledge about, where whose timelines appear). Here under “forward” by timelines implies “towards enemy pieces”
From summerset