If you can't take bronze at Parking A – you here.

The essence of the guide

Here we do not collect self-propelled cars that endlessly knock over butter at an angle in 90 degrees. This guide is not for clav racer, who like how the game plays itself after pressing the forward button.
This is a guide for those, who enjoys controlling a complex mechanism and wants to subdue it to their will. Guide for those, who wants to drift, rather than copying setups from YouTube and pulling stripes in the settings. Who wants to go sideways in BeamNG, Asseto Corsa, and other games, be it sim or arcade I just started playing myself, and I am writing this guide for myself. As written in the subtitle – if you can't even take a bronze in the parking lot, then this guide will suit you too.

Constructive criticism and comments in the comments are welcome..

If you can do better – this guide is not for you.

You want to see the corner and the continuation of the track, and understand how and when to react to developments. To do this, set the camera to look there., where are you turning. During training, press ESC and go to camera Y settings. Customize the camera from the screenshot, in the future, adjust for yourself and your monitor. 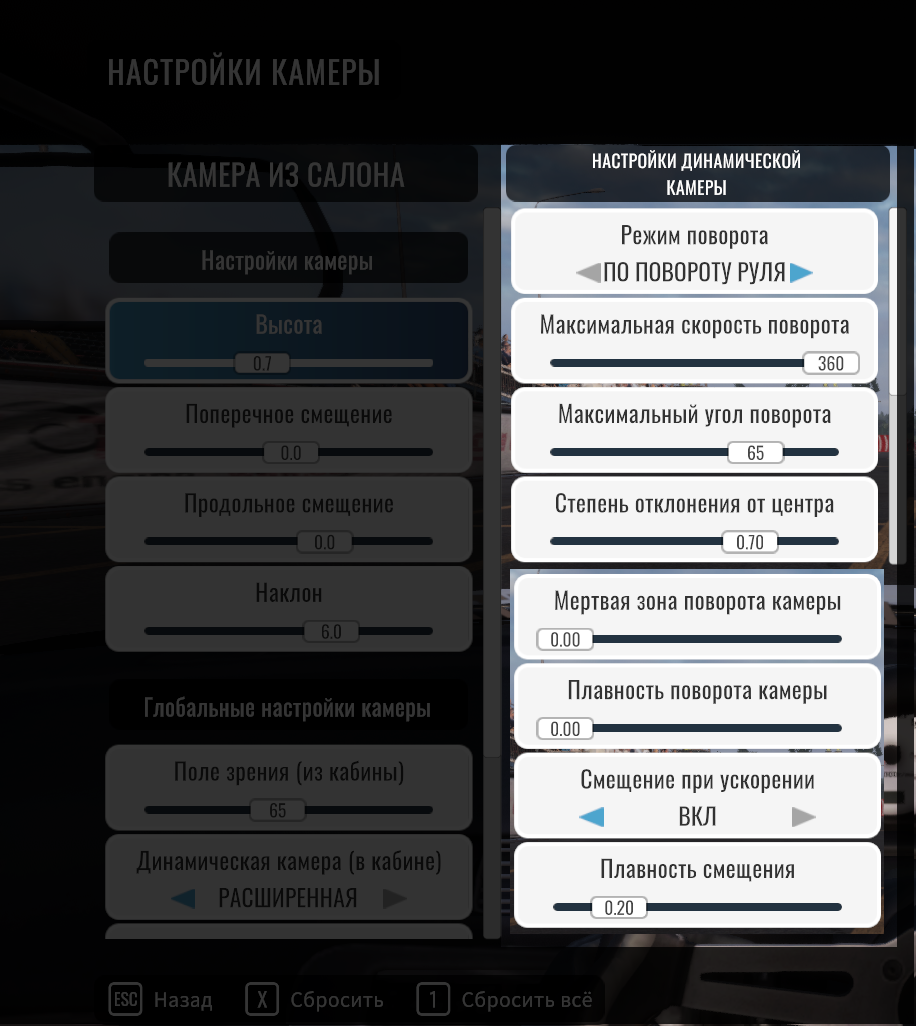 Many people think that the traction should be minimal for drifting.. This is not true.
With a lack of grip, the car will be worn and deployed, the car will be uncontrollable.
Too much will make it difficult to keep drifting, the car will be very sharp and picky about the control. Generally, with an increase in driving speed and pilot skills – grip can be increased, well, at the initial stages it is worth reducing. how? Read on.

The easiest way to adjust wheel grip – change pressure. It's worth starting with pressure 30 psi / 206 kPa, true and front and rear wheels.
Convergence it is better not to touch the front wheels, can I play until 0,30. Custer in the stock car it goes about 7 degrees, It's enough, but you can add a little (in the range up to 12 degrees). Collapse should be removed in minus, but without fanaticism, to -4 quite enough. If you collect an understated bastard on crooked legs – you made the wrong guide.
Rear wheels, more pressure – less grip wheels with surface. It is worth starting with the same pressure in 30 psi / 206 kPa. Range 135 – 300 kPa, 15-45 psi. Collapse – zero! Rear wheel camber for assholes!
You can try to increase toe-in in between 0,60, but this will add to the grip.
Wheels from 40 up to 45 cm (16-18 inches). For starters, you can put the most dead tires.
With experience, you can put “sticky” tires (in the game it is a separate parameter “Wheel clutch”, if you twist it, you can see how the appearance of the tires changes, we need 120%). At the back – ordinary 100% or killed 90%.

It's simple. As with any fast driving, there is a concept of a racing line, apex turn, that's all.
Overclocked too much – did not fit into a turn or lost control and spun.
Too slow – lost drift and nodded in the apex.

If this is your first rodeo, new car, new settings – it's better to start from scratch, from something simple.

Find an open area. Stand slightly to the right from the center of the site to neutral. Unscrew the steering wheel as far as possible to the left.. Shift into first gear, then squeeze the clutch, drown the gas, and release the clutch. The following will happen – the motor will pick up speed sharply, then after the clutch is thrown, the revolutions will be transferred to the static wheels, and the car will break into a skid. Most likely, will deploy you to 180, and this is where it ends, the car will start to slip in place, then again turn to 180, and so on in a circle.

Now do the same, but do not squeeze the gas completely. A task – find such a level of revolutions and catch such a position of the gas pedal, when the car is spinning in one place, and the front wheels practically do not move. Do not be afraid “pump”/”modulate” gas, pressing a little harder, a little looser at a fast pace. If everything works out – return the steering wheel to the center position. The car barely moves, and you will continue to circle with just one gas pedal. Magic and sorcery, not otherwise)))

Anyway, congratulations, you are introduced to drift initiation by throwing the clutch, and also began to understand and feel how drift works. The next step – full-fledged “bagel”.

If nothing worked – do not worry. This is not the most correct way to feel the car and drift., and perhaps you will be able to immediately stand on “correct” bagel. Try. And take your time, these are the basics without which you cannot learn extreme driving. 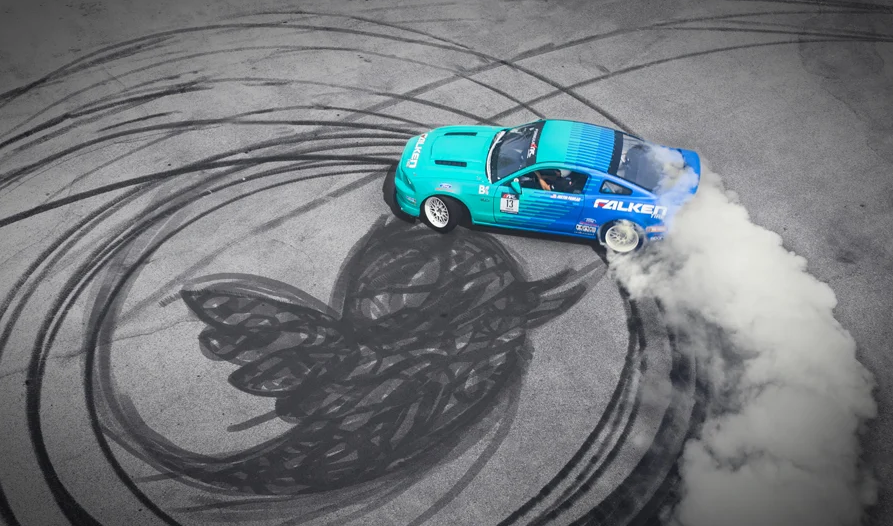 Find the cone, pillar, yes, even an arrow drawn on the ground. In first gear, begin to quietly circle around this item.. Lock the steering wheel position, and start to pick up speed gradually, until the front wheels start to lose traction.

Let go of the gas. This will shift the weight of the vehicle forward and eliminate oversteer. (oversteer). Once the weight has shifted, immediately push the sneaker to the floor. This will throw the back of the car forward.. 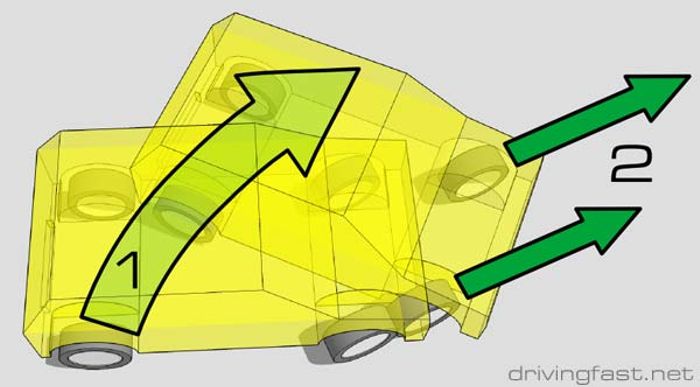 As soon as it turns sideways and the nose of the car starts to look approximately in the direction of the object around which you were circling initially, grab the steering wheel and start pressing the gas with the steering. Congratulations, you draw a bagel and let the car drift. More gas will be diverted to the center, less will reduce the strength of the drift and align the trajectory. 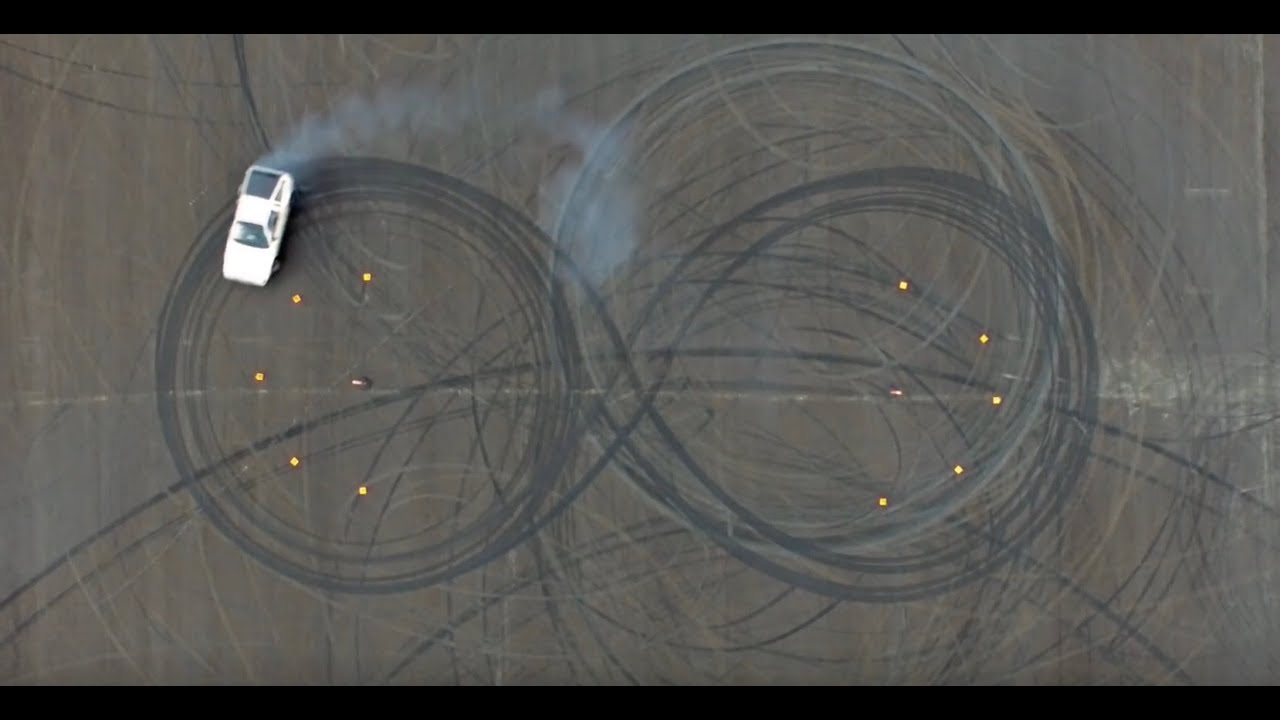 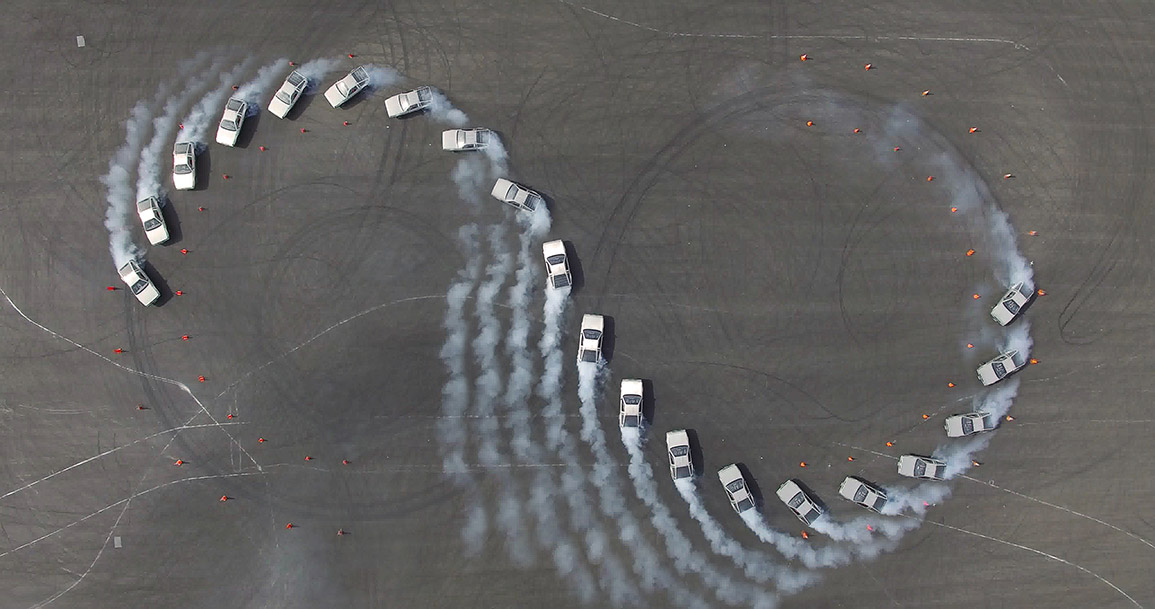 If nothing works – think about this.
When you hit the gas pedal, the rear wheels begin to rotate and, if there is a clutch, push the rear of the car forward. If the front wheels are facing straight, the car is moving straight, as the back of the car pushes “carcass” auto forward, and the front wheels drive him straight.
When you're in a skid, “throwing sideways” and you smoke, rear wheels have very low grip. However, passing or maintaining gas, you still push your ass forward. Refuel – and the car will deploy, “toss sneakers over ears”. Maintain the revs and the wheels will catch the traction, the car will begin to move in the direction where the front wheels are looking. 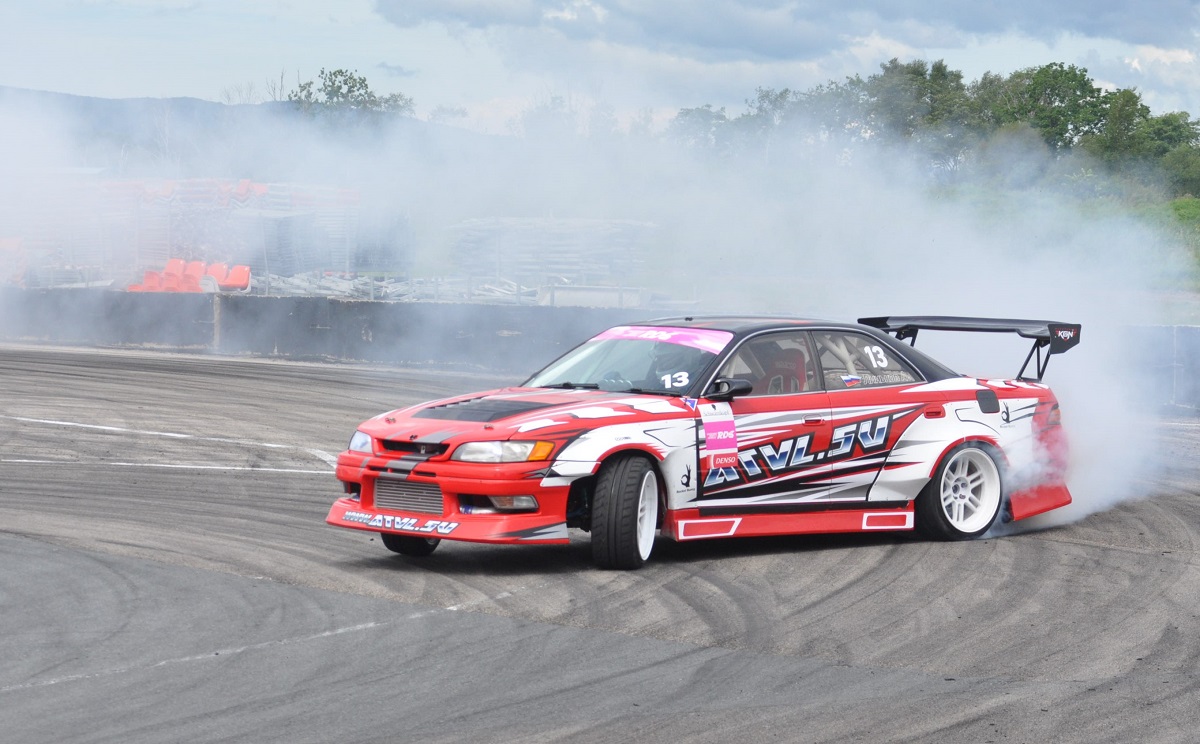 From bagels to drift

If you get clear and controllable eights – most likely you are already ready to conquer the tracks and I have nothing more to tell you.

If all is well with bagels and eights, but the track doesn't lend itself – try to ride the Hachi-Roku / AE86 in third gear. Keep the momentum in the middle on 5000-6000, and squeeze almost all the way when you want to initiate drift. At about 2000 usually the machine will stabilize, that is, supporting 3000-4000 rpm you will drift, above – curl up, below – stop and level out.

It is not necessary to twitch or twist sharply. Turn the steering wheel slightly away from the center, squeeze the gas, and the skid will start by itself. Unscrew the steering wheel in the opposite direction almost to the stop and modulate the gas pedal until you catch the required effort and pace. Catch this feeling in the back of the car, and control its speed – speed up to get into a skid, support to stay in it, and fold to stop the skid.

There is a little hack in the first person game – being in a skid with the steering wheel turned, pay attention to the skyline. It moves evenly when you're in a skid, but if the horizon stops moving – then the car is catching the clutch and is now twitching in the other direction or going straight, depending on the position of the steering wheel. Explore this moment too, see how the car behaves depending on your actions in this situation. In fact, this is the transfer moment, which the – SUDDENLY – depends on your actions, and not from car settings))