When I tried to do it myself, it didn't immediately hit me, How can I do that. Unfortunately, Saiko no Sutoka is still a fierce random, much depends on, will you be lucky with the keys spawn and where will Miss Sayka spawn? (I know, that she is Saiko and that name is not inclined, I just want to call her Saika, warning for aesthetes C:)

Beginning of the game

As soon as we appeared and left the director's office, immediately go to the electrical room, since our priority is to turn on the light as soon as possible. 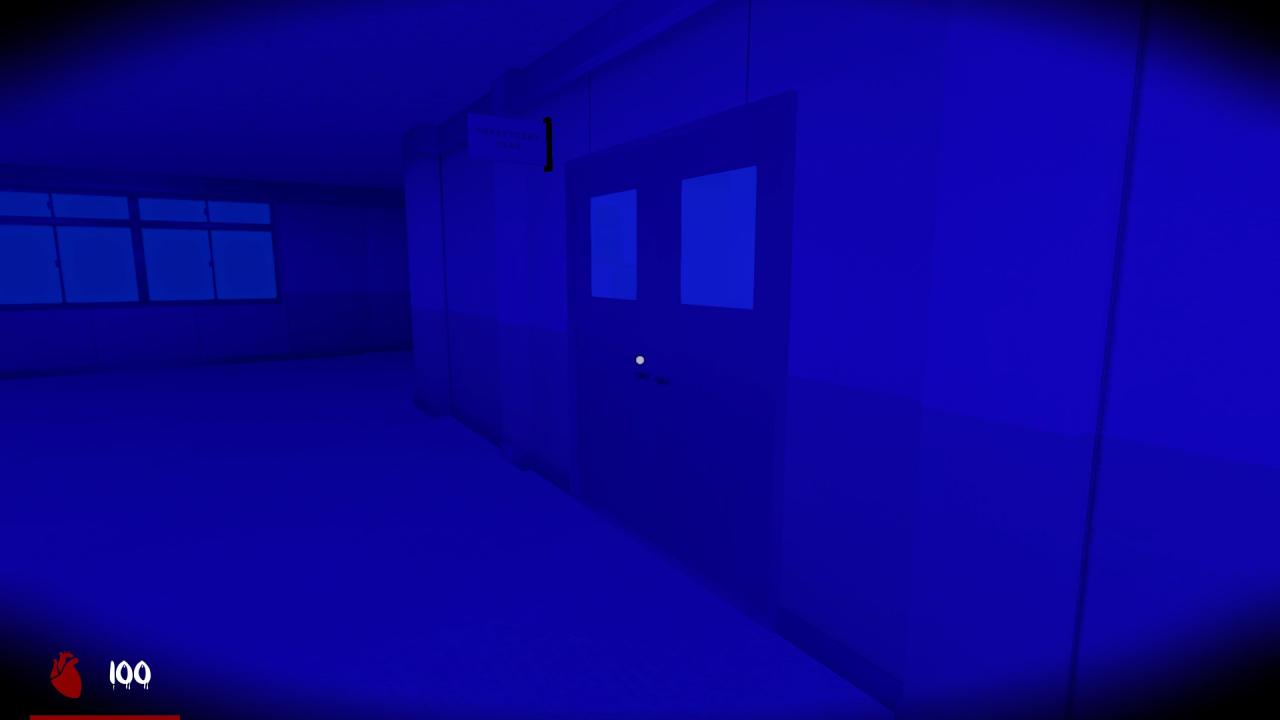 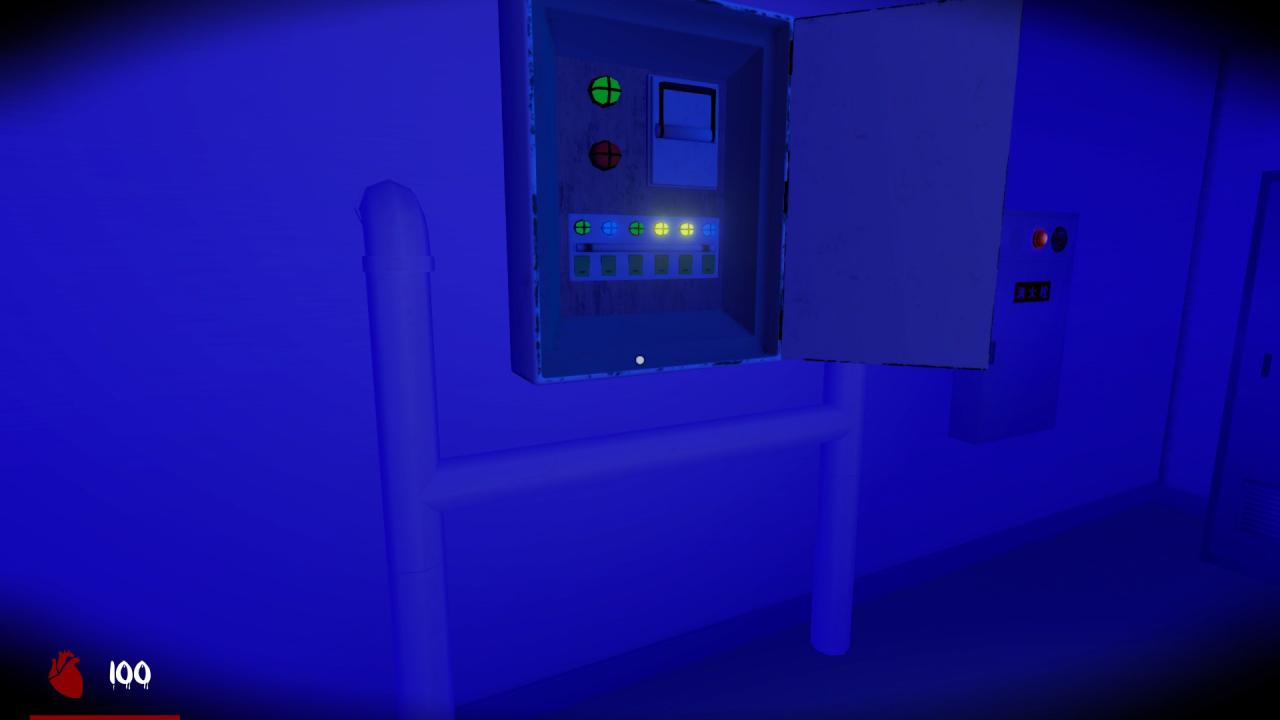 Attention!
No need to run into the electrical room like crazy after leaving the director's office. We remember, that our main goal is to escape from school WITHOUT GETTING P I Z D S DAMAGE, a premature meeting with Asia's most dangerous killer Saikoy can ruin all our plans… Right? (I'm talking some crap, ches word)

After going to the dashboard

so, we turned on the light, what do we do next?

With probability 99% Saika will come behind your head to the switchboard, as soon as the light is on.
You must be very vigilant here!
Bye beloved Saika holds the knife with a reverse grip, don't let her get close to you! Otherwise, the animation of the beginning of the quick time event will be waiting for us., during which we have to press Q and E, so that Saika doesn't stab us. Not, she will not kill her lover right away (all the same, this is not the Yangire regime, here Saiki has a mercy mode), but one blow will definitely strike, what already makes us restart. 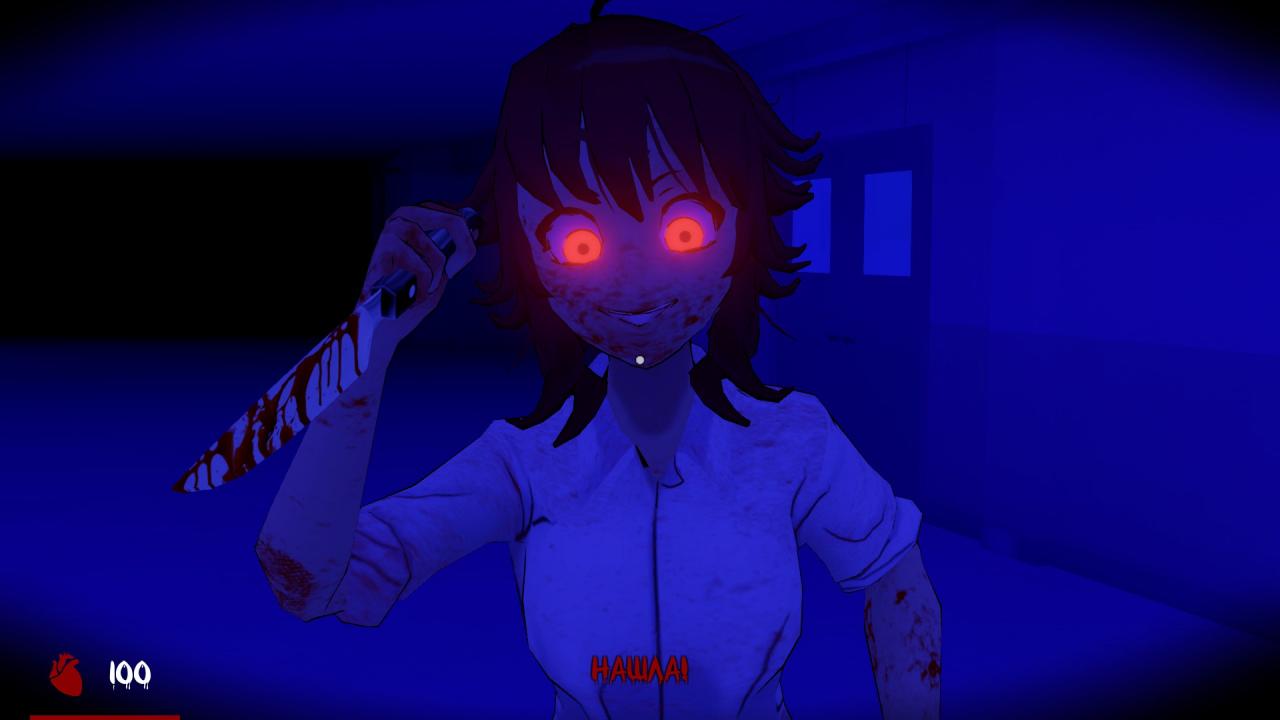 Even if Saika heals Senpai, we still have to restart the level, because the condition for achievement is “Pass the, not receiving в е б л е т DAMAGE” 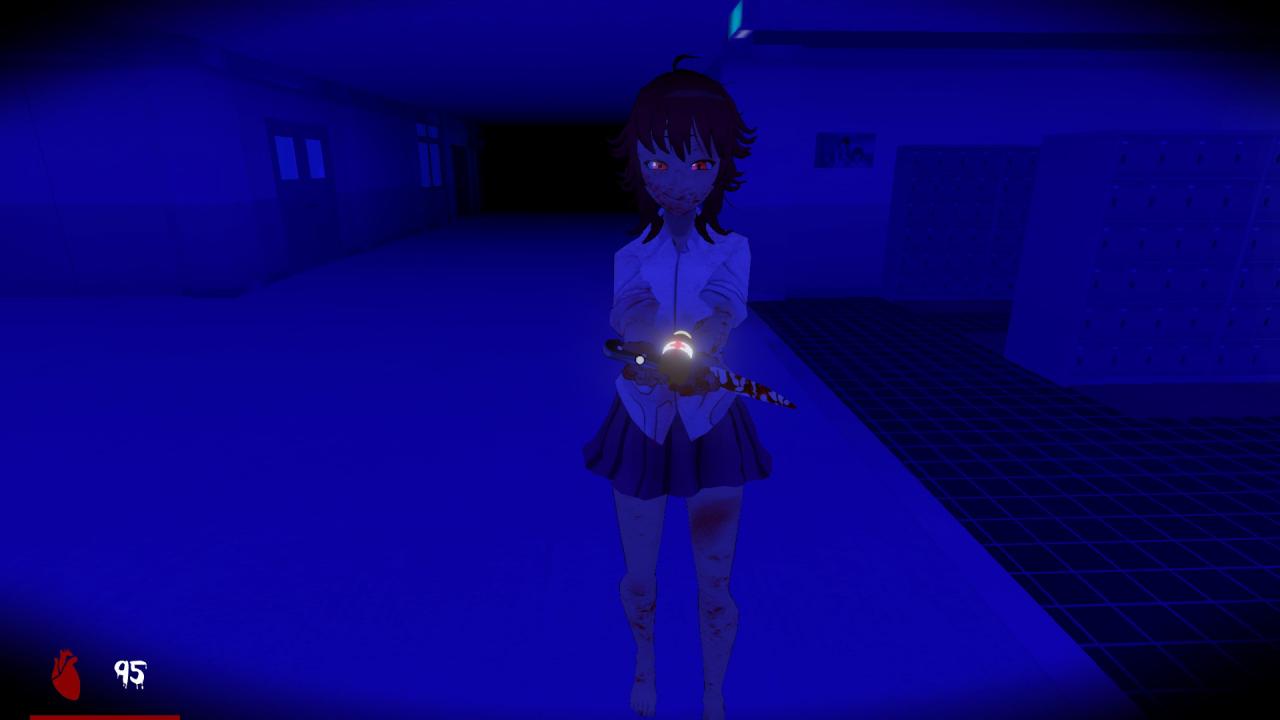 So what should we do?

We run from this friend until then, until she turns on the kind mode. 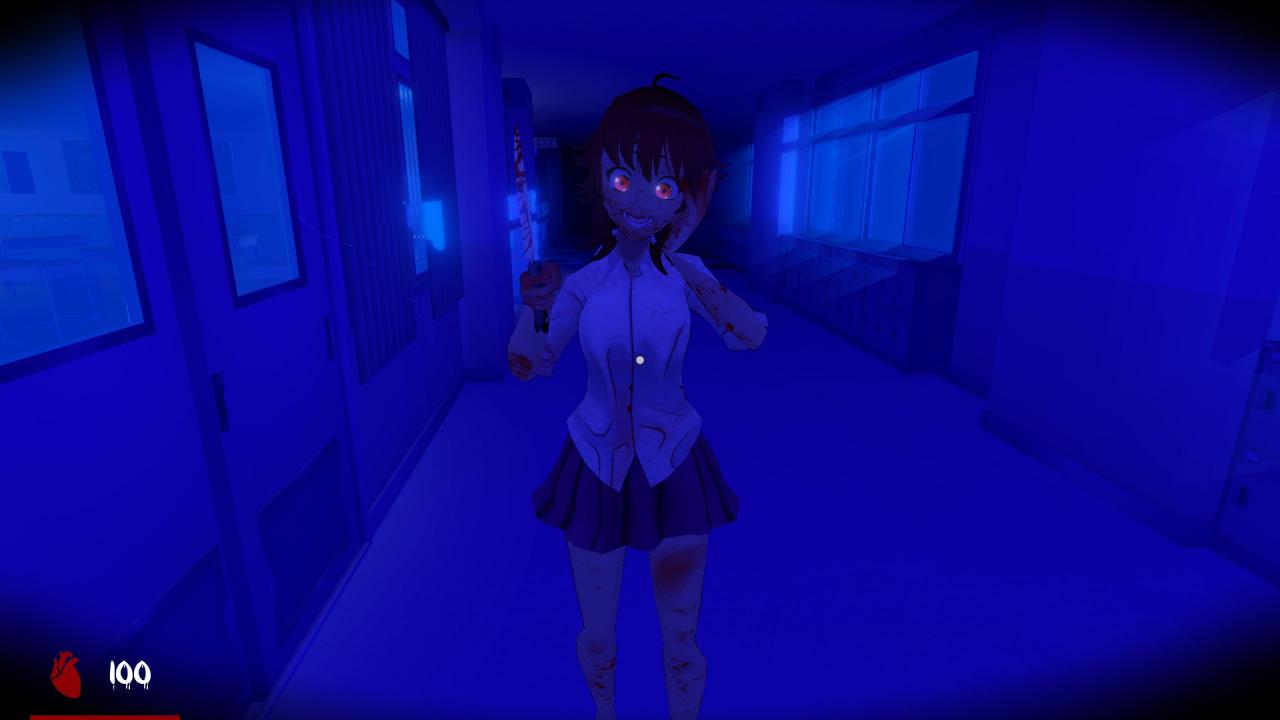 How to understand, that Saika poses no threat to Senpai?
The girl's eyes will become softer., the color of the text at the bottom of the screen will also change, but most importantly – Saika will apologize to Senpai before going into good mode. for that, that she wanted to rape him.

Now comes the tedious part of the gameplay (but to get this achievement in my way, it is necessary) – just running around school, searching all available rooms (including the dining room, computer science room, library and meeting room), keeping Saika in sight.

I also advise you to find shoes, they may still be useful to you (if anything, they are in one of the corridors, or near the front door)

THE MOST IMPORTANT – DO NOT PROVIDE A SAIC!
Don't go running, this can provoke her to switch to normal mode. Walk with your usual stride, keeping the girl in sight. 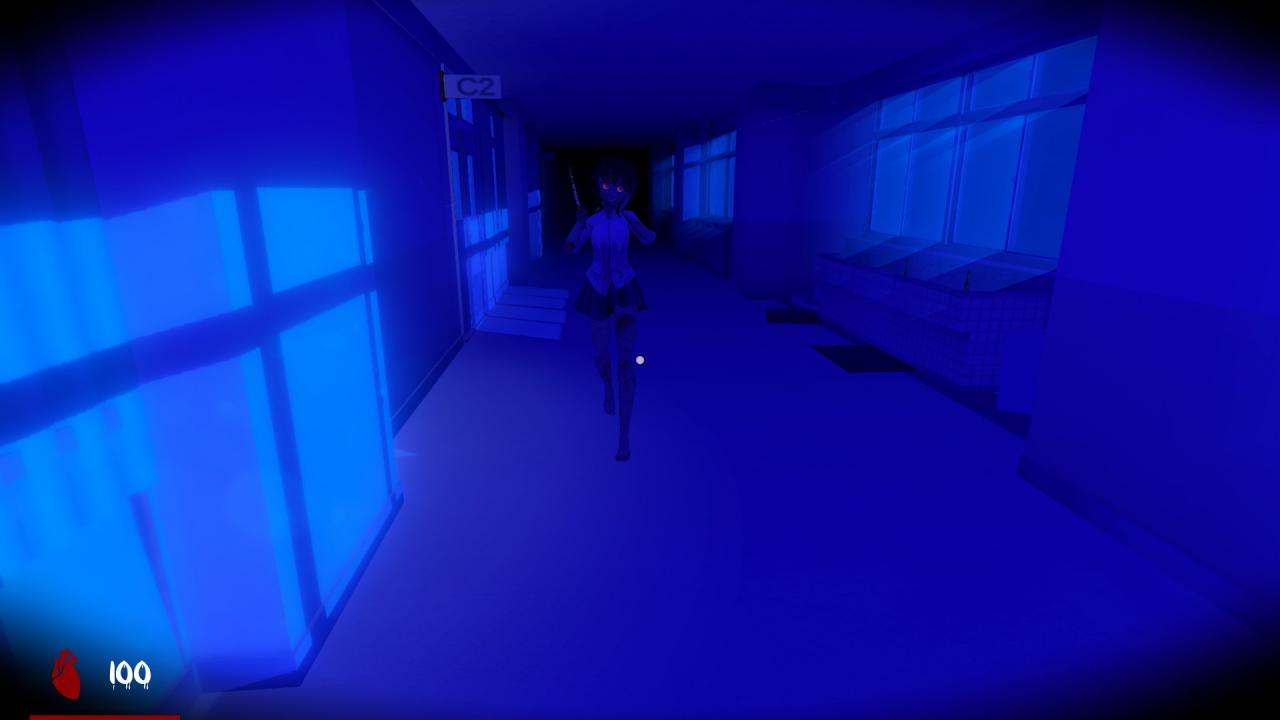 Try to do this to open doors or search lockers., to Saika with his body “covered” then, what to interact with. This is necessary in order, so that Saika does not climb on our back. 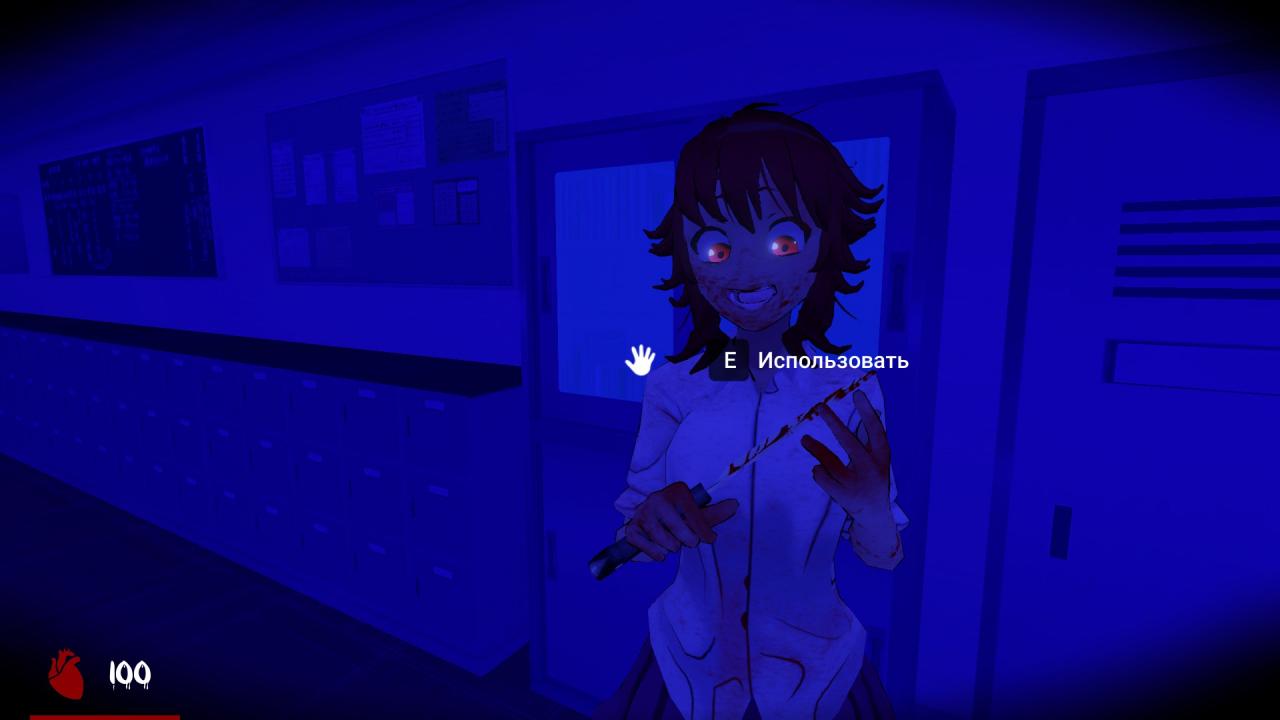 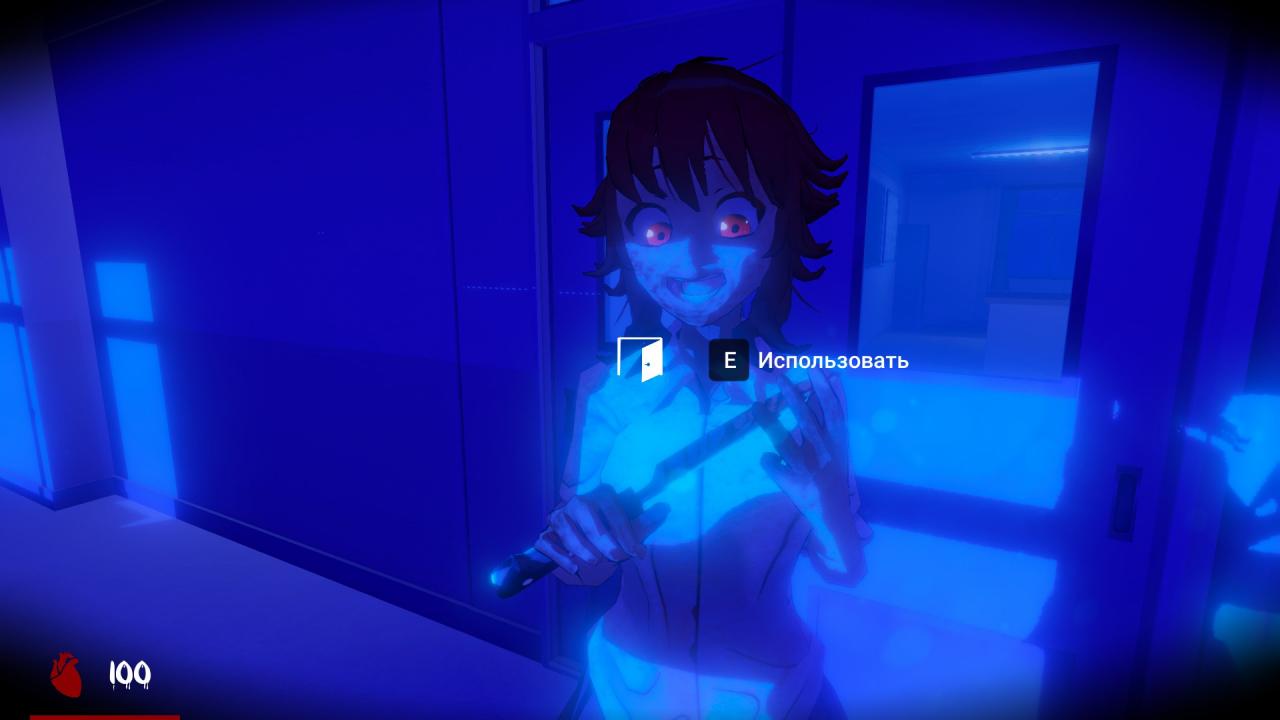 The first blunder when passing in this way: pick up keys. If we pick up the key, then Saika will turn on the normal mode bitches, and not a fact, what will it be possible to return her back to good mode, not taking damage. 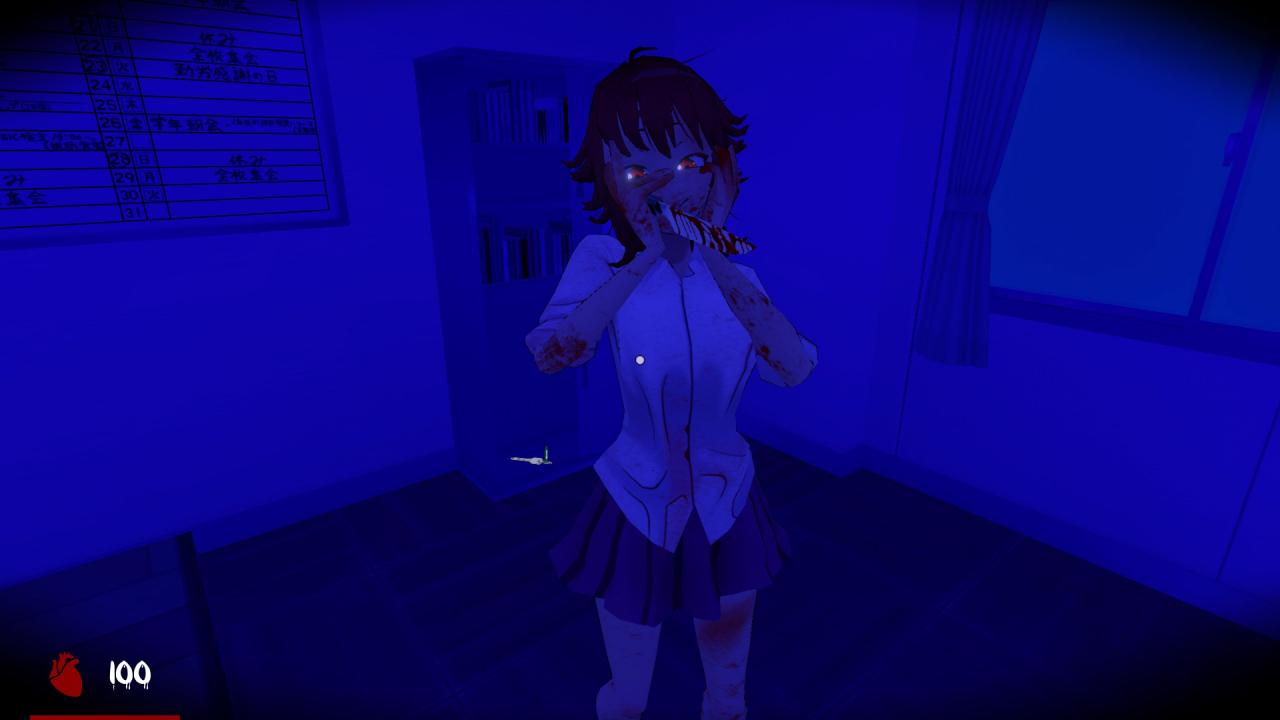 Write down the places with the found keys in a real paper notebook, either in a computer notebook, the main thing, to know for sure, where are the keys

Second blunder – if Saika did jump on Senpai, try to dump it, when the girl started to choke us. Remember, no matter how many times she stuns Senpai this way, none of these stuns:
1. Doesn't damage Senpai;
2. Does not output strong and independent Saikou from good mode;
3. Will never be fatal. 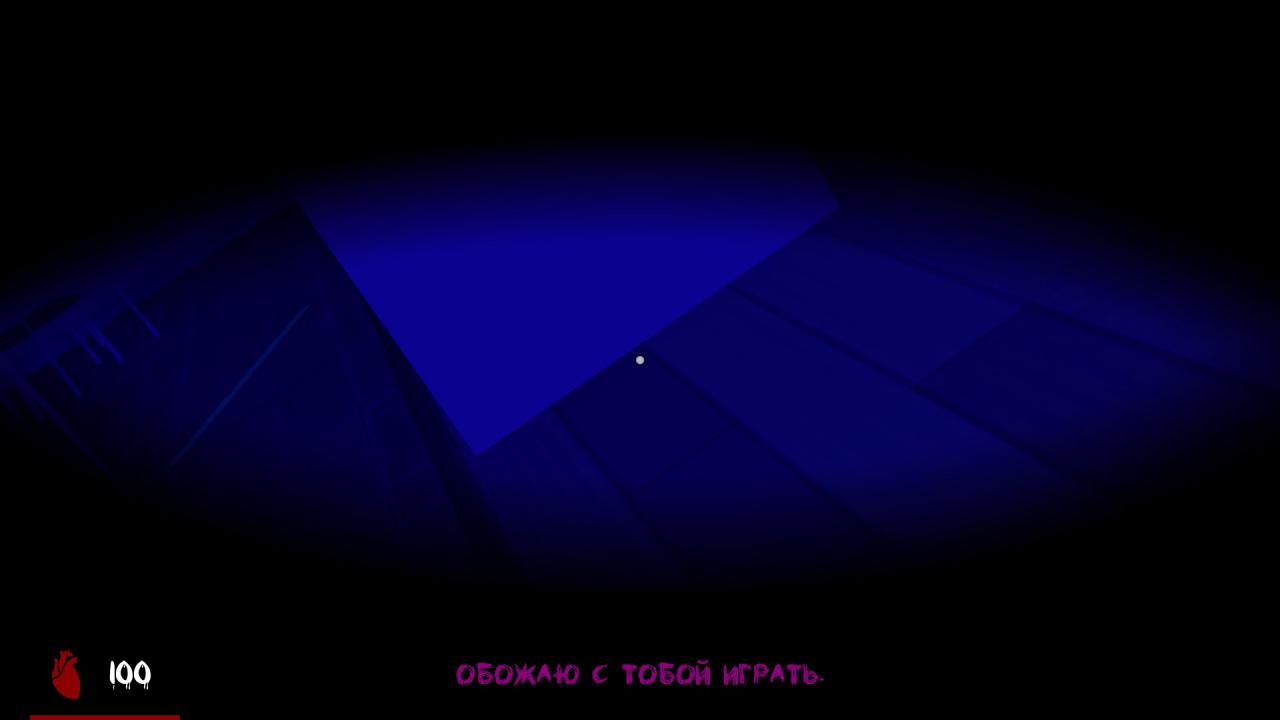 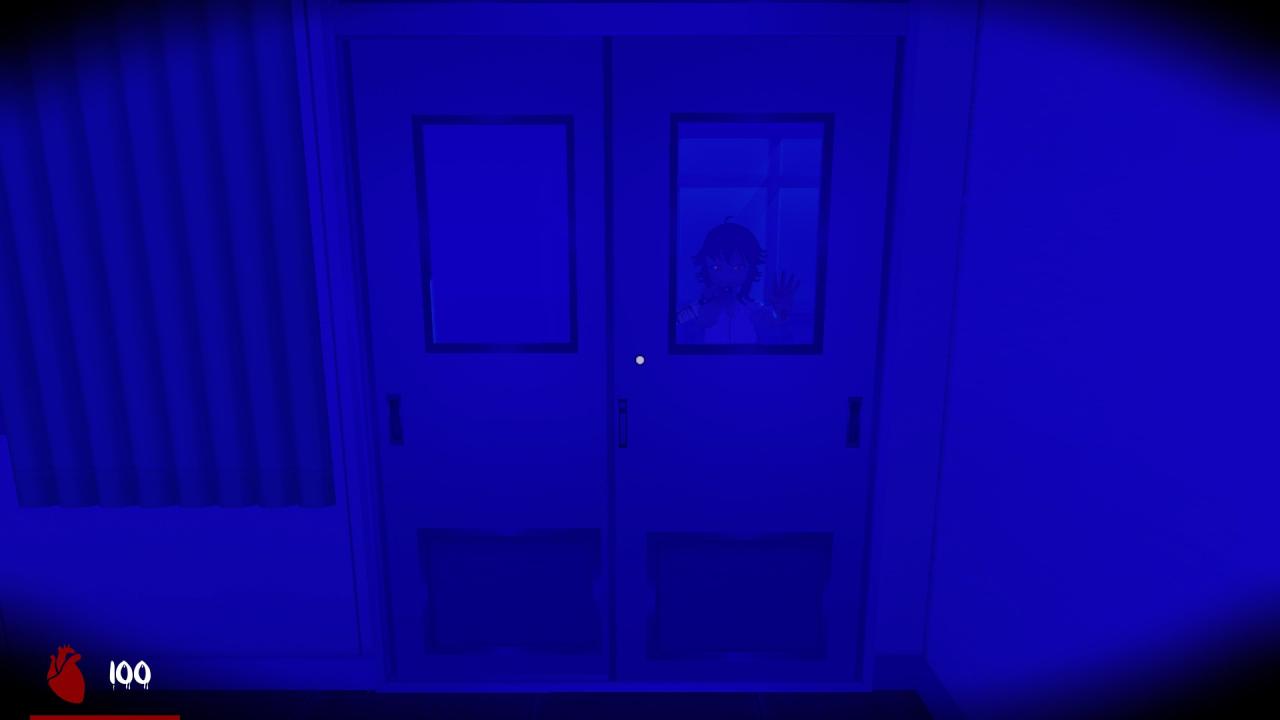 the main thing – don't kick the door a third time, otherwise Saika will fall and beat the ass will turn on bitch mode normal mode
but, I do not advise you to let Saika climb on Senpai too often, for for some reason I do not understand, once after that, how she let me out and I ran with Saika to check the next room, Saika cut my throat. The method still does not guarantee 100% victory, however, the chances still increase significantly.

End of the game 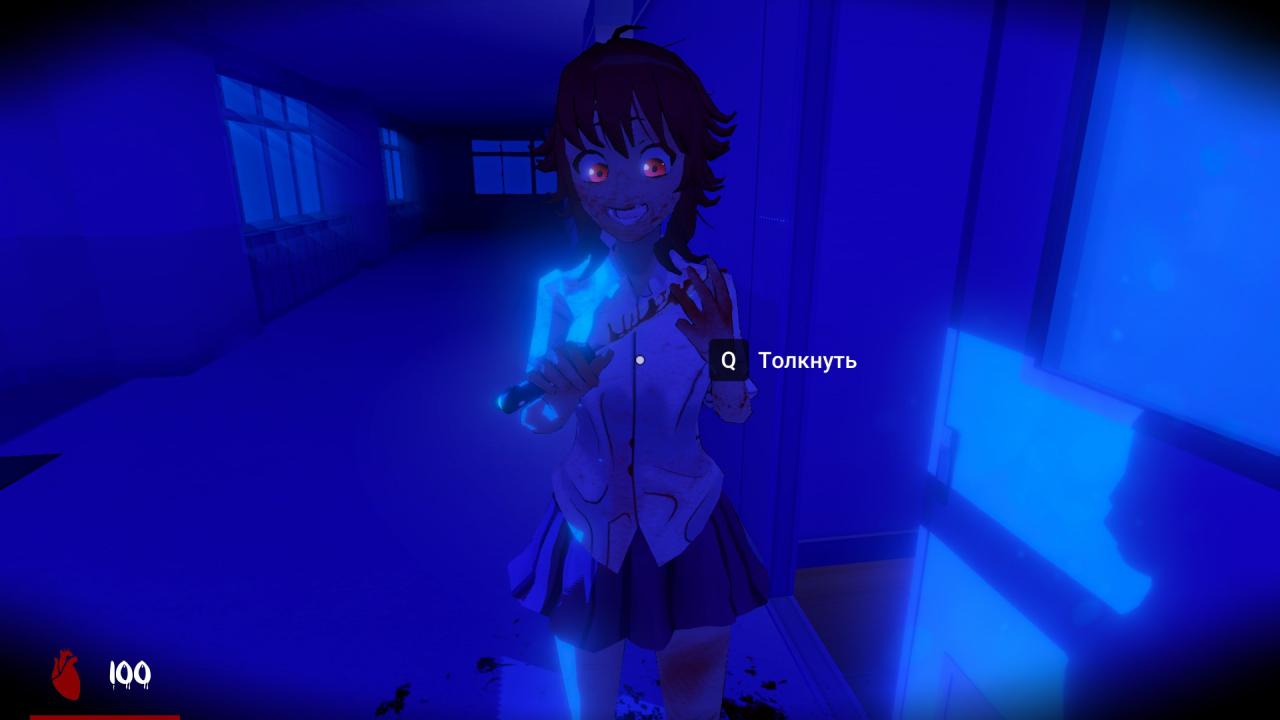 While Saika gets to her feet and goes into bitch mode normal mode, run as far as possible and take the first closest key, opening the door corresponding to the key. Two situations can arise here:

The first situation
Saika chases Senpai, along the way, threatening to punish him, sometimes she even openly threatens to kill Senpai.
(P. S. the latter is quite often pronounced by Saika in Yangire mode, however, it is more or less justified there, there she really turns into an unstoppable killing machine (Terminator and Nemesis are resting)
Everything here will depend only on the speed of your actions.. If we didn't neglect the shoes, then broken glass will not be a problem. After a certain patch, Senpai was able to delay your demise close in the room, just by holding Q next to her. Completely and completely safe you, of course, won't, the girl will just take the door off her feet in a few blows, however it will still be better, than if she entered the room with you and closed the door herself (there it is generally impossible to leave without damage, since when trying to open the door, Saika can show us that, that she is clearly engaged in martial arts, by making a dropkick and knocking out the door with Senpai's body. Often after that, Saika can begin to choke the player., but it won't matter anymore, the mission to escape unscathed will already be failed).
Run through the rooms, write the code into a notebook. Collecting all the code, we throw off the tail and go to the director's office. We take away the key from there, by entering the code, and run away as quickly as possible, since the girl will tear Senpai apart, if she gets her (one hit kill).

Second situation
You hid, and Saika went kick the generator turn off the electricity. Don't run turn it back on! The girl just gave Senpai a full minute to do anything. (since turning off the light, Saika sits in an ambush in the control room, and she waits there for a minute). Seize the moment, open all doors, which only you can and cannot. As soon as the girl leaves the switchboard, turn on the electricity and return to the open rooms, to write the code. And then, again, we take the key from the director's office and run away from school..

End of the manual!

Hopefully, my guide helped me get this pretty difficult achievement. Why the guide is not about Yangir? Because there is already a guide about this., but about the same achievement in hard mode, I did not find any manuals. Complicates the situation even more, that when passing “normal” way, we are totally dependent on spawning boots, since in this mode it is impossible to remove damage from shrapnel, crouching across broken glass. Immediately, Saika herself would allow Senpai to properly manage the school until that moment., when it would be beneficial for Senpai to piss off the girl.

Here is proof, that I really got this achievement