A bit of meta for those, who can't cope on their own. It is worth reading even if it seems, what is understanding.

Energy, rules of the game and lighting

Each round starts by spawning players in different parts of the map. At 6 and more players on the server can be found next to the enemy. You must immediately look around and listen carefully.!

Everyone has one life and you can start the game again only in the next. round, when the winner is determined. The winner is the player who killed everyone or just the survivor. You could say this is a classic DM (Deathmatch). 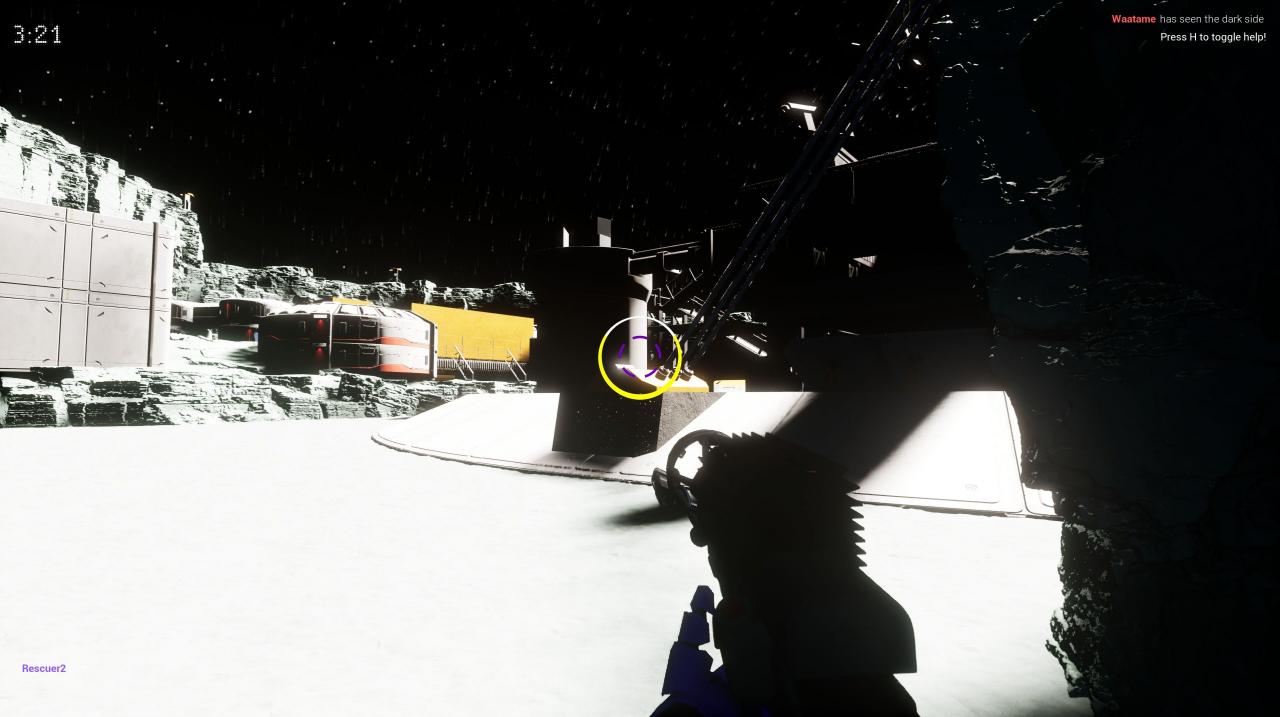 The choice of tactics can be both passive: ie. do not rush into battle and do not waste energy on accelerating movements, and waiting for the right moment to attack (if you need her); so active: attacking nearby opponents and / or breaking through to the Generator. 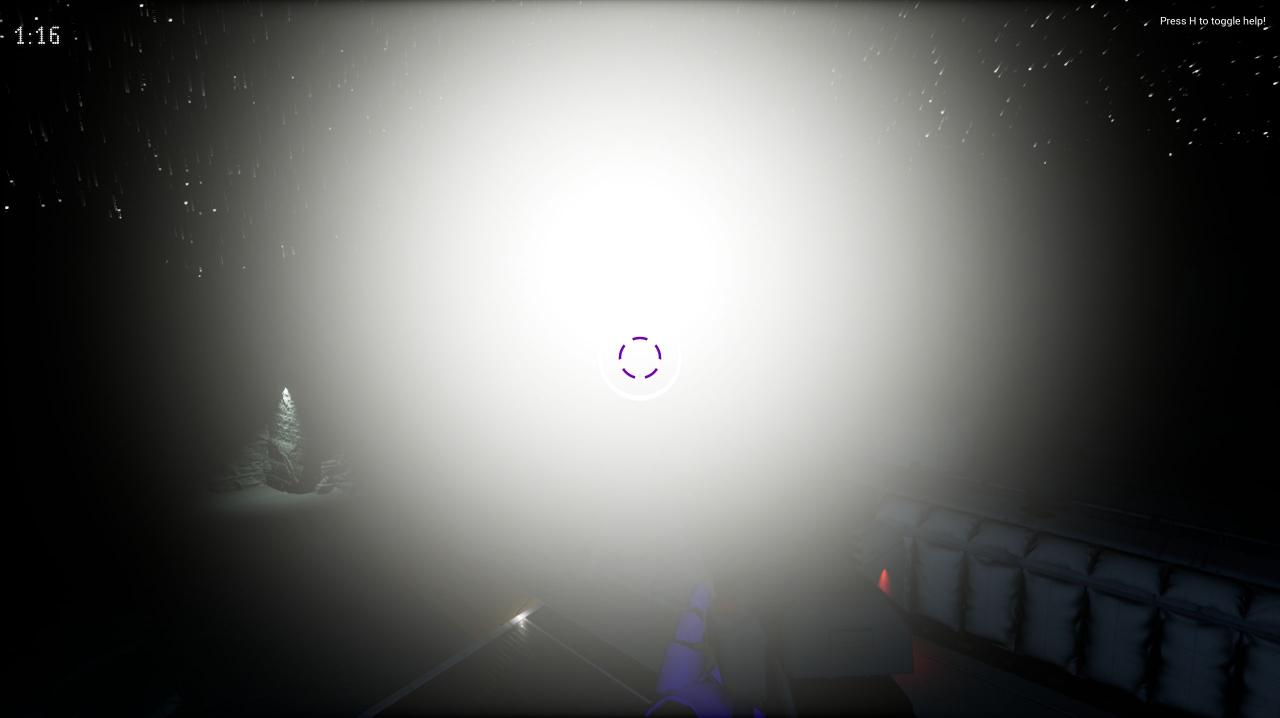 The map itself is dynamic in only one respect - lighting.. Strong contrast between light and shadow greatly affects what is happening: player behavior (if they understand what's going on) and the effectiveness of positions. Star, until she's at its zenith, gives one side of the card a strong inconvenience and it is very bad idea to fight against any threat blindly, therefore, you need to think ahead and instantly react by changing your position into the shadow and / or stand with your back to the star as far as possible.

The closer you are to the player, the better you can see it. At a distance of ~ 3 meters, even in complete darkness, you will see the enemy, albeit faded, as well as he you. 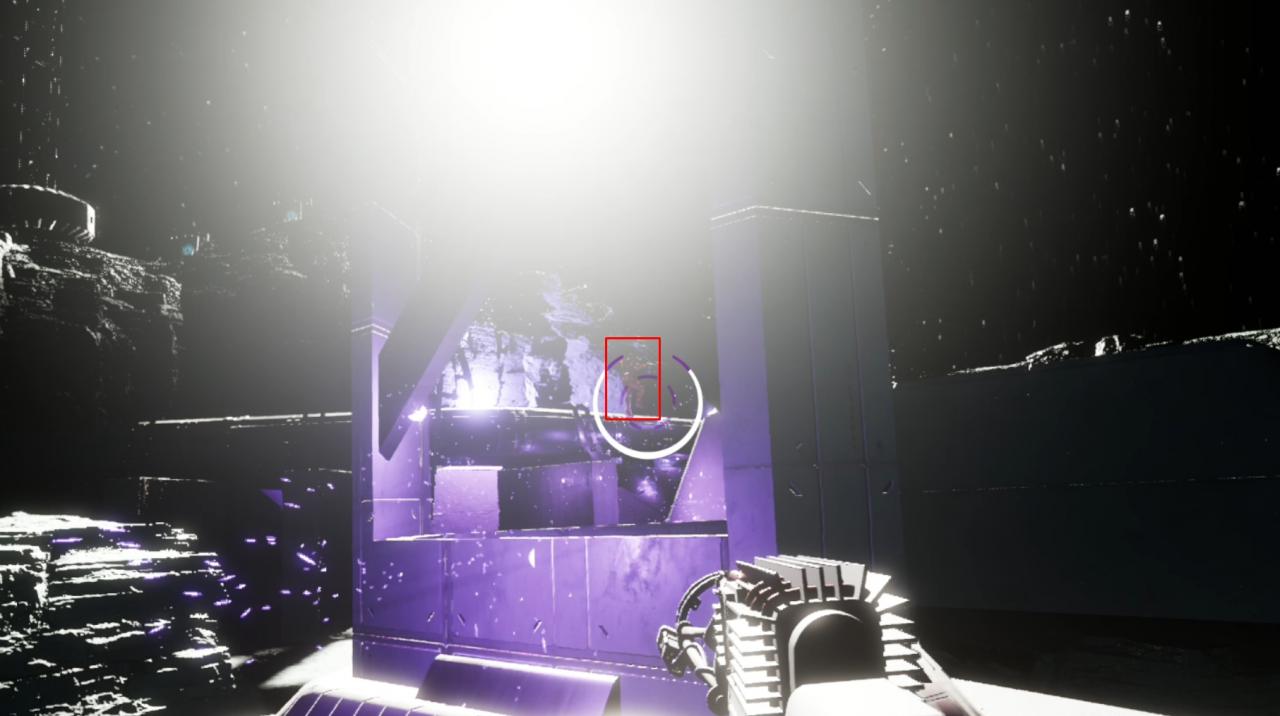 Take a close look at the image. The enemy is marked with red. After the chase, facing a star, I was in a very difficult position, trying not to just see the enemy (which was only possible until I pressed my opponent in an area with at least some visibility), but also to fight!

If you think, that this is all with the appearance okay, then keep in mind that in addition to a more or less successful moment behind the enemy, there is already a pre-set trail from the Flare-gun!

The generator is a zone, when entering which you can get energy. After it is activated, a reboot will begin, lasting two minutes. Locating visually is easy from almost anywhere on the map (bright pillar of light).

Low frequency hum, which it emits is audible from either end of the map and is easily identifiable. In addition, the activation sound is very loud and expressive., and the sound of charging, although quieter, still easy to read (high frequency noise and brooms).

Energy - ammo singularity, health and, when activating the Generator, add. energy. In total, when you spawn, you have two minutes of energy and this is exactly how long the life of your avatar lasts, unless you attack, turn on a laser flashlight or accelerate (more details in the section “management and fundamentals”). If you activate the Generator, then restore the standard amount of energy (2 minutes) and get extra. quantity. In total it will turn out 4 minutes and you can safely spend them, but they either don't work like armor (ie. add. HP(Heath Points), or the damage of the main weapon mode is so great, which negates the presence of additional. energy.

The timer is on the top left, and around the sight is a radial analog. The timer display changes only quantitatively, and the graphical version constantly signals a small remaining energy and visually shows the waste from actions.

The sound of footsteps is heard nearby, but it will be detected well enough in space. Does not waste energy, but standing still has never been my working tactic.

When pressed, acceleration itself wastes energy very quickly. (in 3-4 times faster), but gives a decent acceleration of horizontal movements (on a jump and any vertical action has no effect) and at a minimum dosage it can seriously speed up the player's avatar.

The main disadvantage is the highlighting of the avatar using acceleration. Small radius, but guaranteed gives an idea of ​​the location and the vector of movement to opponents. Recommended to use to enhance horizontal momentum when jumping and very limited for maneuvering in battle.

The height of the jump depends on the time you hold the key, which allows you to climb only to the desired height. This is important in a low gravity context., because. the trajectory, even if it is constantly available for correction while driving, still pretty predictable. Does not waste energy.

Archival moment: loudest sound, published by the player's avatar (except reaction to hits), this is pushing off the ground and landing. Even with a meager sound picture, it will not be difficult to locate the player at a very decent distance., therefore, it is recommended to jump and jump off to other surfaces as little as possible without the need.

The most important and most dangerous (as for a player, and for the opponent) a way to destroy the enemy and quickly change position. Killing in this way is guaranteed to replenish your energy supply.. If you make such an attack in the air, then the effect will be similar to terrestrial application, but the momentum is so strong, that the blow will turn out to be exclusively horizontal (the fall or climb will stop).

Spends 10 seconds of energy. Kuldaun (inability to reuse for a certain amount of time) very small, which allows you to kill opponents in large numbers, but requires excellent timing and accuracy.

Push action, which repeatedly saved the hitbox from being hit to me personally (using cover or in combination with other movements). In a seated position, steps are completely disabled, allowing you to exclude your detection by sound, sacrificing speed and agility. Highly not recommended for inexperienced players, but good tactics with a rough understanding of the enemy's position in a 1v1 situation.

Energy Shotgun, capable of destroying any enemy with one salvo, but only at close range (~ 1-2 meters). Since this, in fact, energy beam with multiple attacking elements, then to maximize damage you need to be not only close, but also aim at the center of the opponent's hitbox (the difference from hits in different parts of the body was not found).

Every hit is accompanied by “shouting” opponent's avatar, visual and audible confirmation. You should be very careful when choosing the moment to attack., because. cost of one shot - 20 seconds and a rather long cooldown. This is a lot! On average, there are three shots at medium range and one at close.

Besides these aspects and many others, which is the gameplay of the game, you need to keep in mind the ability of the target to restore energy through kills and you need to be extremely careful with opponents, activating the Generator (you do not need to be afraid of them, just keep in mind, that they can spend a lot and be less careful without some consequences).

T.n.. “Flare Gun” - in essence it is a backlight, but capable of low damage and an incredibly effective tool for highlighting a specific area or for contrast. Hitting the player “will attach” to it a light source for a short time, making it easy to identify in the dark. 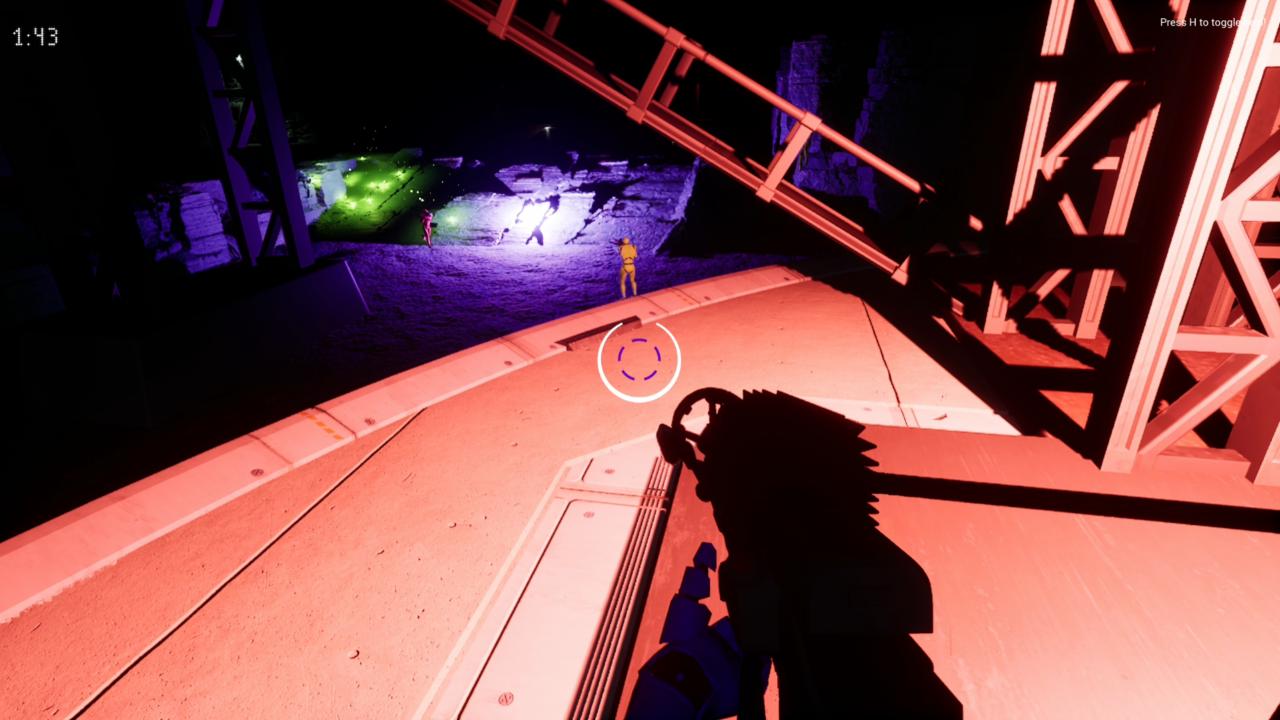 Everyone tries to find each other first and most of the players in the same battle, but there are those, who have not yet entered and are watching the situation with the help of the backlight.

In addition to the relatively short cooldown, a short charge is required before firing, during which you can drop a shot (releasing the button). The cooldown does not affect the main firing mode in any way, which allows you to combine them in different combinations and cause very impressive damage at a fast pace. Spends 5 seconds of energy (possibly restores it by hitting the opponent at the expense of his energy, not confirmed.). 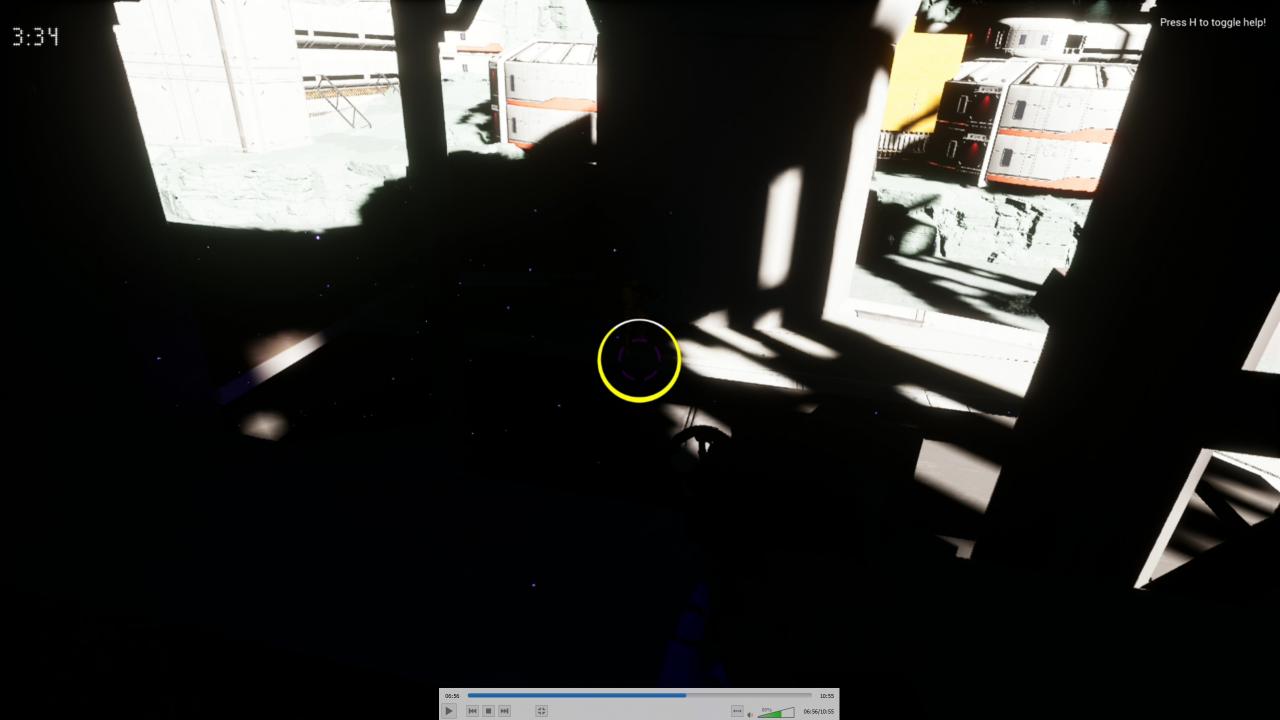 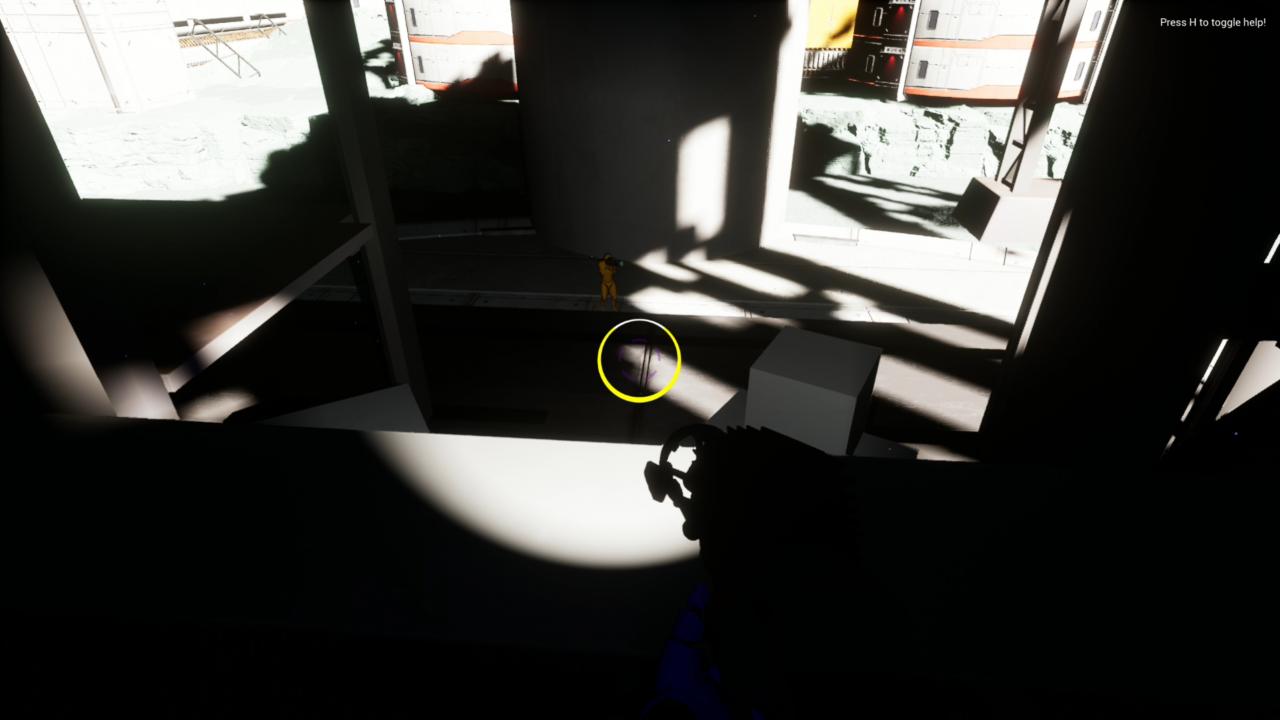 Less than a second difference between frames: left without flashlight, on the right with it.

A primitive flashlight with a decent. but limited range. It is clearly visible only up close and gives out the position of the user, therefore it is recommended for use in short pulses and generally infrequently. The main advantage is that it does not waste energy.

The functionality is similar to a flashlight, but it illuminates much worse, wastes energy (accelerating its consumption in 2-3 times) and indirectly gives out the position of the user and visually, and sound. Possibly highlights players on hit, but this is not confirmed.

Not recommended for use, if only because of the significant waste of energy.

At the end of the guide, I present you with a video of the gameplay.. This is not high-class gameplay with a lot of bells and whistles., skill and technician, but it shows the application of all that, what i described in this guide, on practice. Yes, the majority of players sometimes can't even hit me, what can we say about understanding a unique game of its kind.

“The correct student is, who asks the right questions”. This requires an understanding of the task and the tools available.. Guidance in this context helps, and a video as a pin might be helpful.