The most complete guide for completing the achievement “Broken geography” taking into account the update from 18.06.2021

My opinion – attainment “broken geography” time-consuming. It takes patience. I got it on the second try.
I think, that taking into account the update from 18.06.2021 (balance adjustment + adding new tiles and tiles) the achievement is easiest to accomplish by the character necromancer due to his useful skills allowing him to survive for a long time and the number of skeletons summoned to help.
And that – I played for a rogue, but I could not go through the guides written on the network)))
If something needs to be added – write edit.
Let's go!

Preparing for the expedition

Our task:
“In one expedition, exhibit 10 cards that were not in your deck. Not to mention “Oblivion”.

The most important thing – we will play 3 chapter. The boss in this chapter “Hunter”. IN 4 I don't lay my head down, since our task is to meet and kill the enemy “Primary matter” and one of the abilities of this opponent in 4 chapter sounds like this: “Predestination” – sixth attack of the creature guaranteed kills the hero.
In the camp, it is desirable to have the maximum pumped out cemetery and houses. Houses – for tab “supply”, to be equipped with different utensils to the maximum.
I recommend taking:

We take the maximum amount of the above listed utensils. The rest of the utensils to your taste.

So choose 3 chapter, and leave the following cards: 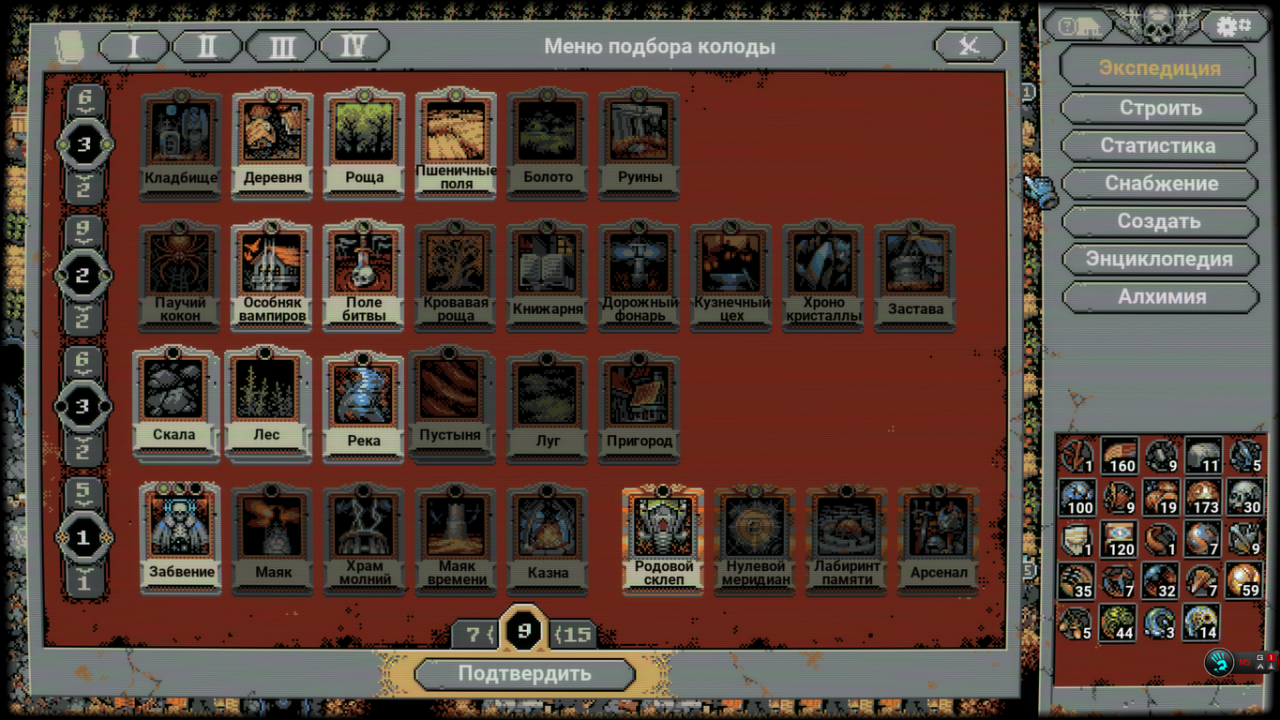 This is a set for guaranteed passage.

But this tile can be excluded at your own peril and risk.:
Family crypt – insurance when meeting with the boss “Hunter”, because with an unfortunate combination of circumstances, you can die, but there is a cemetery (true if it is not pumped it will resurrect with a small amount of health).

Next, select the skills: 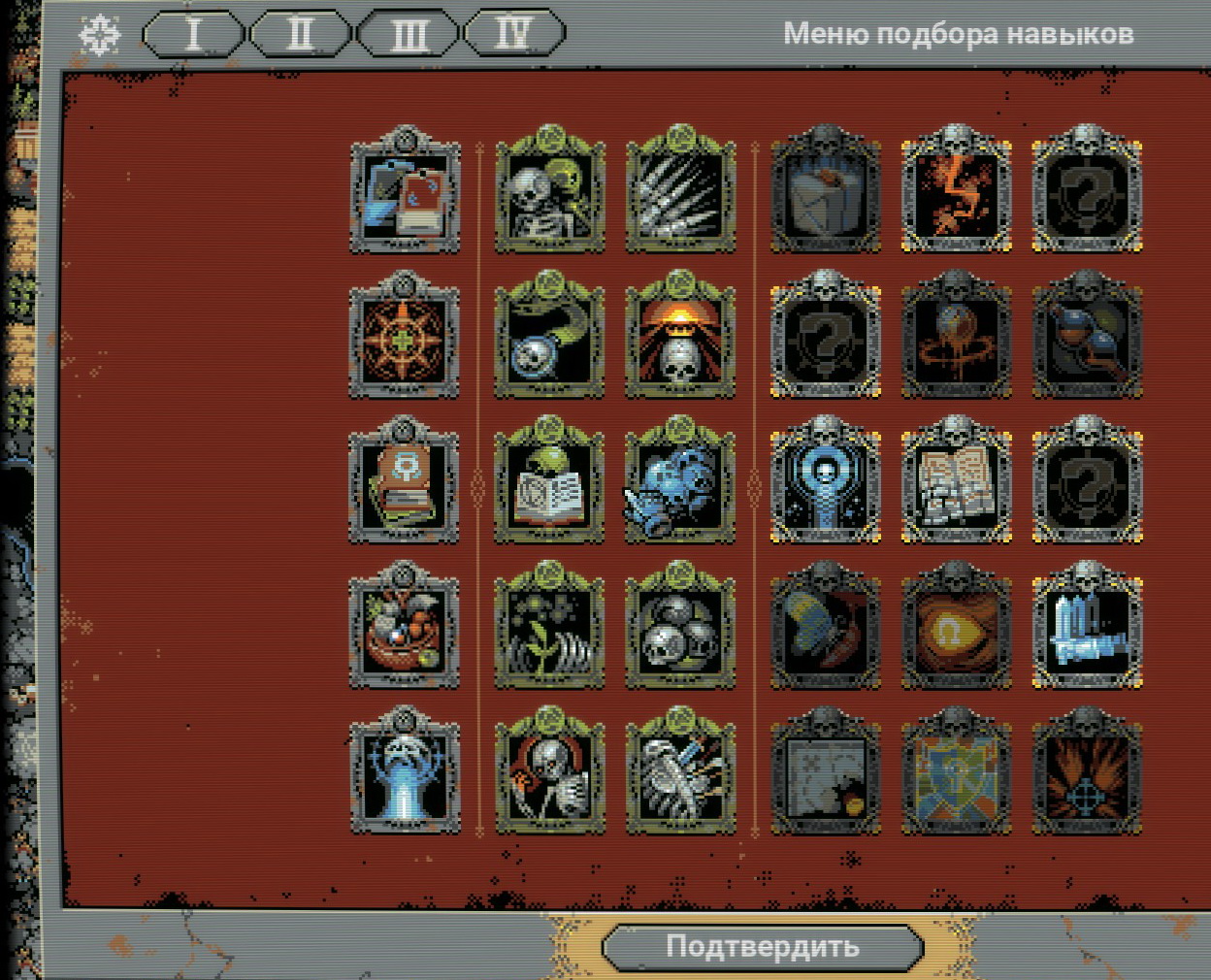 Left only the most useful skills:

Everything is ready, Well, now into battle!

We all know that ghosts appear if there is a tile next to the road. “battlefield”.
Therefore, during the expedition we build up groves all the way., put 2-3 villages, which will be equidistant from each other. We put wheat fields near the villages. Opposite each village we put a vampire mansion. We build up battlefields along the perimeter of the map.
We don't put rocks, we put only mountains. We do not set the forest, we put only thickets.
We do everything slowly – taking into account our strengths and the skills gained from experience.
The resulting ravaged villages – this is firstly an experience, secondly clothing, and in the third all opponents have the status “with soul”.
Be sure to remove the bandit camp (we do not want things stolen from us straight from our hands) and remove the tiles “village?” somewhere to the 25th circle, otherwise the dummies start to hurt us with a counterattack.
In the future, in the course of the game, if everything goes well, you can delete the county lands and reinstall the villages (true ruined village in this case will only hold out 1 circle and the next will again become county lands). Or by removing the count's lands to put a grove. In this case, the neighboring wheat fields will turn into overgrown fields., which generate the enemy “field of blades” with status “with soul”, what we need.
If ship debris appears during the construction of the river – they can be left until the 27th circle – then it's better to delete.

If possible, select skills in the following order (beginning with “lie down”): 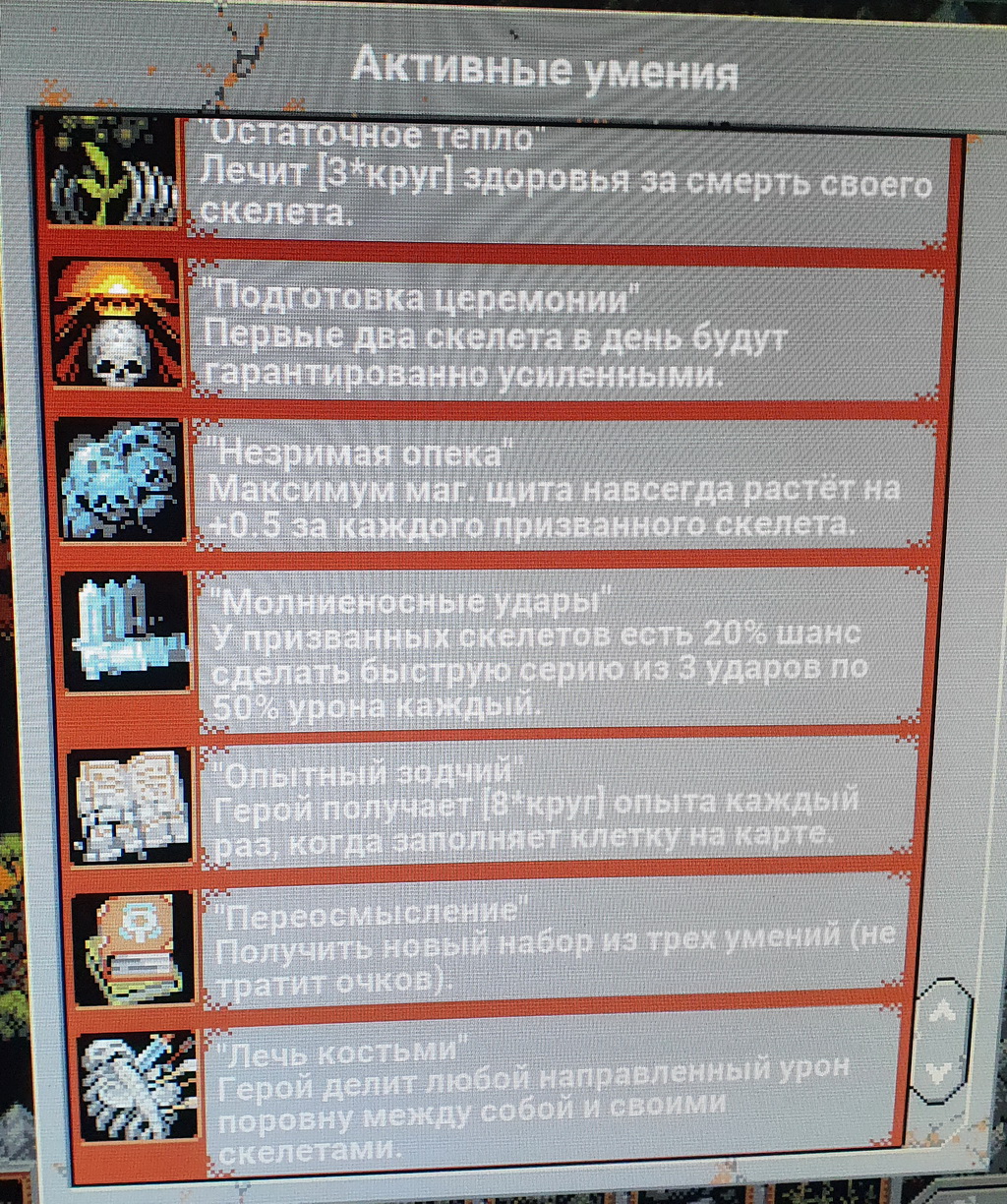 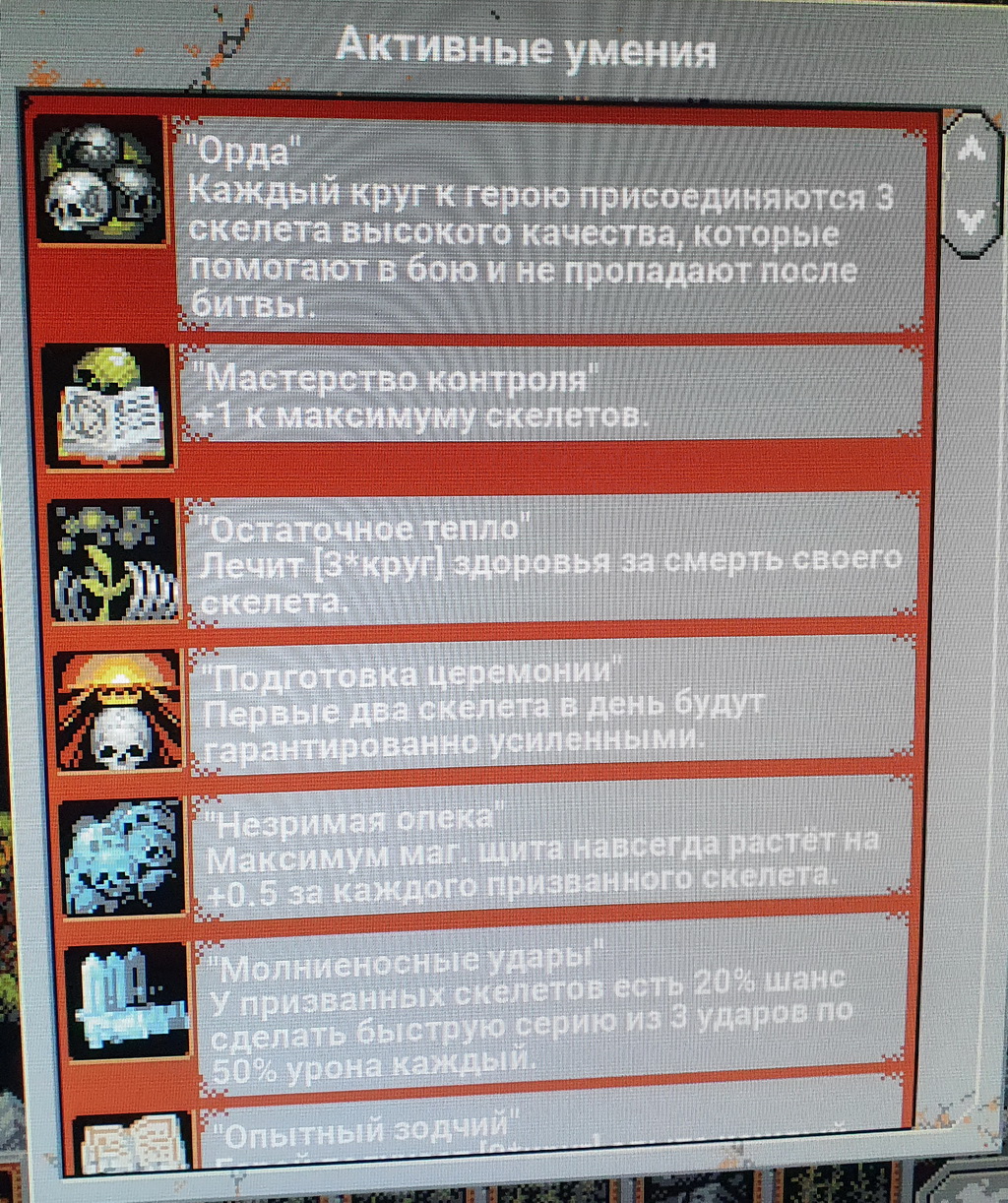 We take from clothes:
Weapon – grimoire to the maximum level of skeletons (ignoring any other properties);
Ring number 1 – maximum skeleton level (ignoring any other properties);
Amulet – magic shield + if possible property +1 skeleton;
Ring number 2 – skeleton level + 1 skeleton.
The strategy is to destroy the enemy with skeletons before the magic shield breaks through you.. Therefore, it is advisable to have the first skill “lie down”, and then “experienced architect” or “invisible guardianship”, other skills in any order.
Due to the ability to lie down with bones at a high attack speed (summon skeletons) our magic shield will not have time to break through. An experienced architect will give a lot of experience for new skills. And the invisible guardianship will lay down enough units of the magic shield for us.

To get the maximum attack from building – we build thickets and a river in such an arrangement: 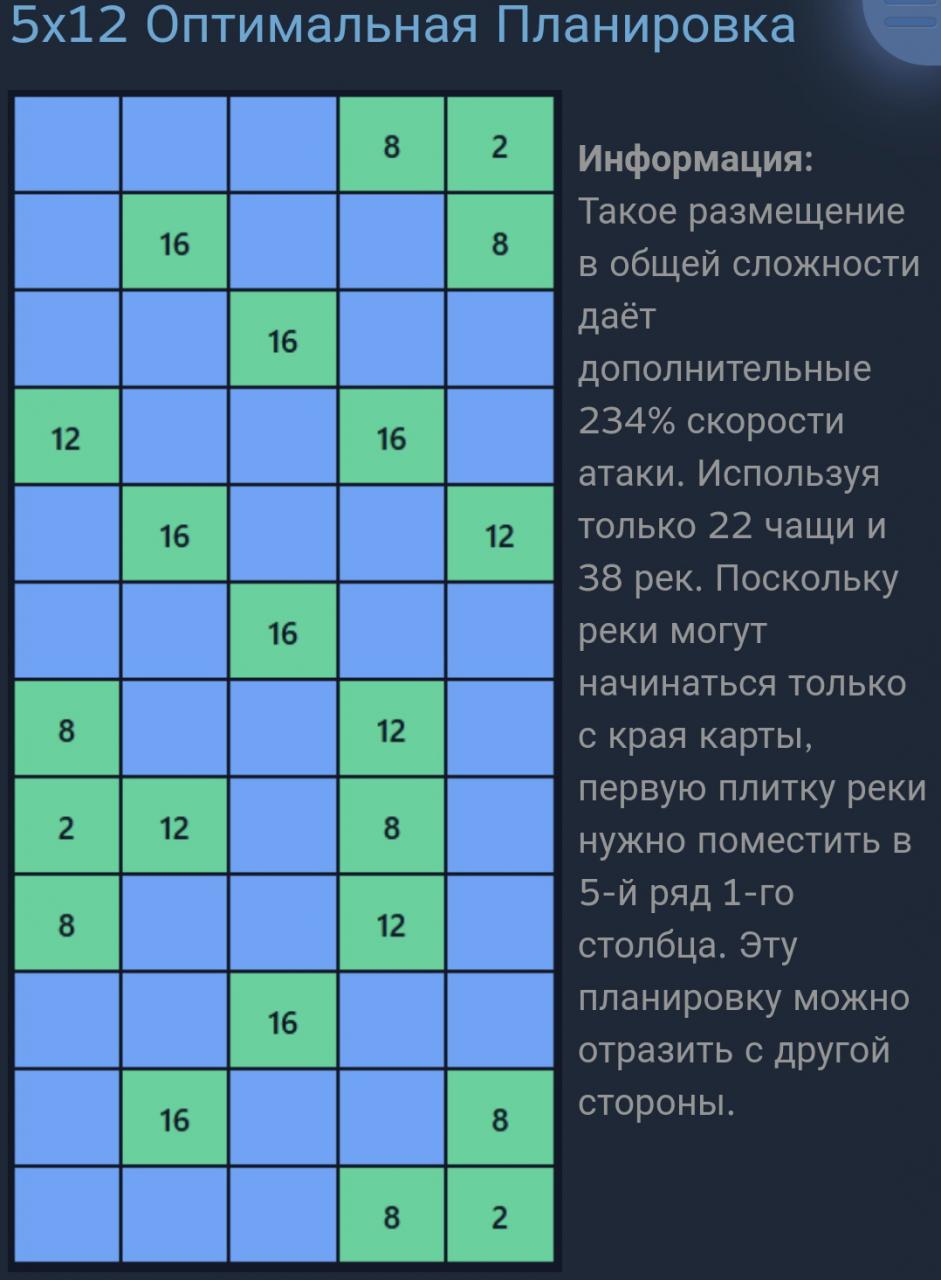 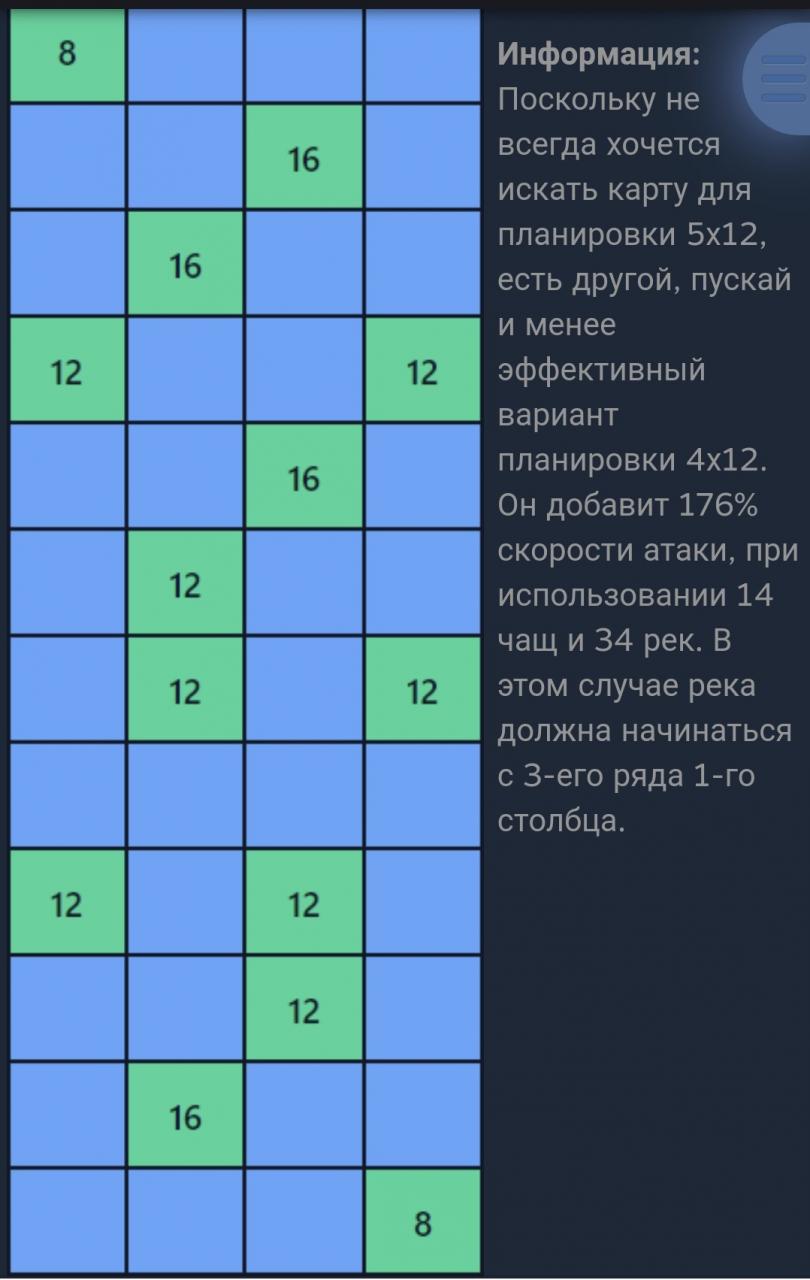 You should end up with something similar to mine.: 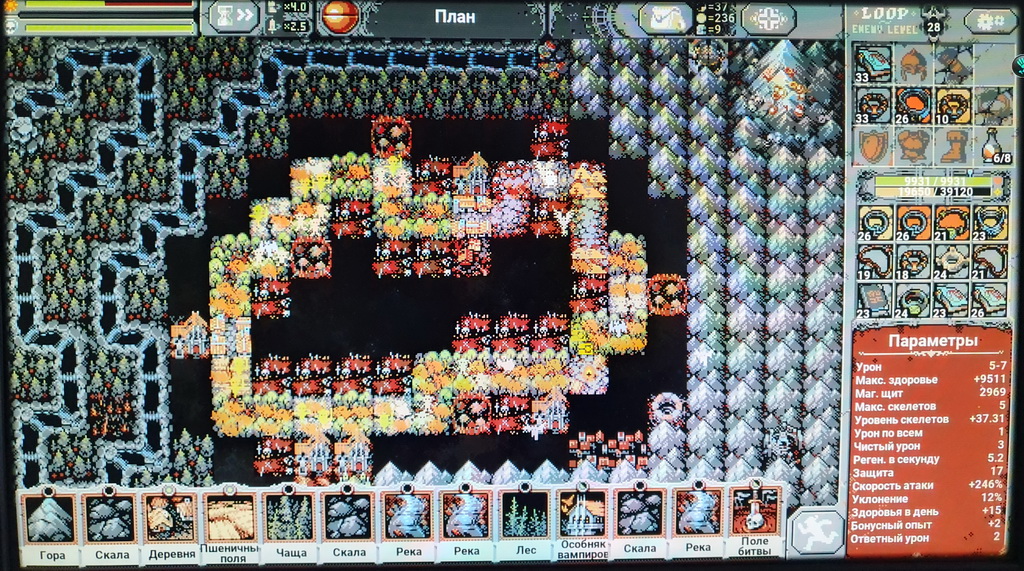 I think I have described all my thoughts on this achievement., Thank you for your attention. Enjoy your game and good luck to everyone.!