Welcome to a series of guides for such a wonderful game Trove. What you will see below is the quintessence of several American guides with translation into Russian.. 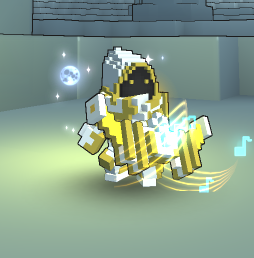 Shadow Hunters destroy evil, wherever it hides. Listen to the dark whispers of your trapped shadow, fend off distant enemies with a charged Radiant Arrow and trap them with sun traps, when they get close.

It makes no sense to translate the description of the character normally..

Shadow hunters get their class gem and get their MG 42 and start to smack.

Shh 30 lvl in stock has 40% crit chance, our task is to bring this parameter to 100% and correctly balance physical damage with crit damage.

Nearby enemies periodically gain Shadowmark, increasing the damage they take from charged Radiant Arrow shots and allowing Shadow Hunter to see them through walls.

Attack, which can pierce enemies and walls. Hold at least 1 seconds, to charge, as a result of which it will deal additional damage to enemies under Shadowmark.

Throws a blinding trap, which, when triggered, stuns and damages all nearby enemies for 2 seconds.

Arrow of the Goddess

Applies Shadowmark to all nearby enemies. Amplifies the Dark Hunter's next Radiant Arrow, increasing her damage, doubling critical damage and knocking back enemies.

300 Light
20% physical damage
You get 15% health and movement speed, when the enemy dies nearby

8 Bottle capacity
This bottle will restore 40% your health and 5% Chance of one charge restoring on critical strike.

IF you have money, Replace with Vial of Deadly Danger

A good emblem for farming would be

Shows itself well before we reach the threshold in 100% СH

Gems
And now the hardest part begins, many advise just to collect 100% crit chance, and then go to xp, what does it mean?
THIS MEANS WE ARE LOSING DAMAGE, therefore it is not our choice. But nevertheless, for a start, you can take almost any gems
Now let's take a look at the improved characteristics of gems. (further I will call them plus signs). 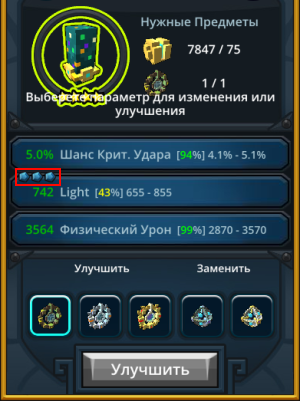 The red rectangle contains the same pluses., they appear with an increase in the level of gems on one of the three characteristics, maximum three plus signs can be swapped with
Contained Chaos Flare which can be created in 6 moon souls and a little more rubbish on
Adventurer's Workbench

And what kind of gems do we need to become the top DPS of all Russia among shx?
PD / CD / CH for elemental and PD / CD / Light for space with this kind of buildup
6/3/7/11 (there are others but the essence is the same)
LARGE GEMES
6 plus on PD / 3 plus on CD
LITTLE HEMES
7 plus signs on PD / 11 plus signs on CD
SPACE GEMES
ALL PLUSES IN Light

The calculation is made on the fact that you have all the necessary dragons on CH, if not, then one plus sign for CH needs to be spent
But we will need to think about the plus signs and do something with them somewhere at + -25k pr.

Killing an enemy gives you a chance to create a Blazing Disc, which deals damage to nearby enemies.
Only one such gem can be inserted at a time.
This stone has a cooldown.

Killing enemies makes them explode.
Only one such gem can be inserted at a time.
This stone has a cooldown.

Class Gem, you must reach 5k pr as soon as possible in order to go to the dark world and get it.

Basic attack transforms into a rapid-fire stream of arrows.
Dealing damage to a shadow-marked enemy consumes the mark and causes an explosion.

Critical Strikes on Enemies can increase Movement Speed ​​and Leech Life on the next hit.

Something like madness – Chance during the battle to transform and get some power of the Lunar Spearman.
+some DPS

Flotilla salvo – When dealing damage, an enemy has a chance to summon a cannonball from the sky.
+ luck and a bit of DPS

Additional infa
Also, do not forget about the master rank on 700 lvl you will receive a permanent bonus to damage in the amount of 135%

I need criticism from the guide, since he is my first, and I'm young, not experienced.