Most likely I was late with this manuscript, as many were waiting and many have already checked out the new update Pechka and Khalupa, abbreviated as piH. But still, I would like to share my opinion on this matter..

ATTENTION
If you yourself want to discover PiH's innovations on your own, then don't read this manual.

First, let's see what they changed in general.. Namely, they slightly changed the mechanics of food., added several items, corrected the balance, expanded graphics and game settings, and of course, the most important thing: added a bunch of everything to the process of construction and home improvement, what the name of the update says directly.

BUT, well, there are changes on the little things, we will consider them first, and leave the construction for dessert. I want to warn you right away, that I could not collect all the information on PiHu, so if you find any inconsistencies – write. In the comments it is desirable. 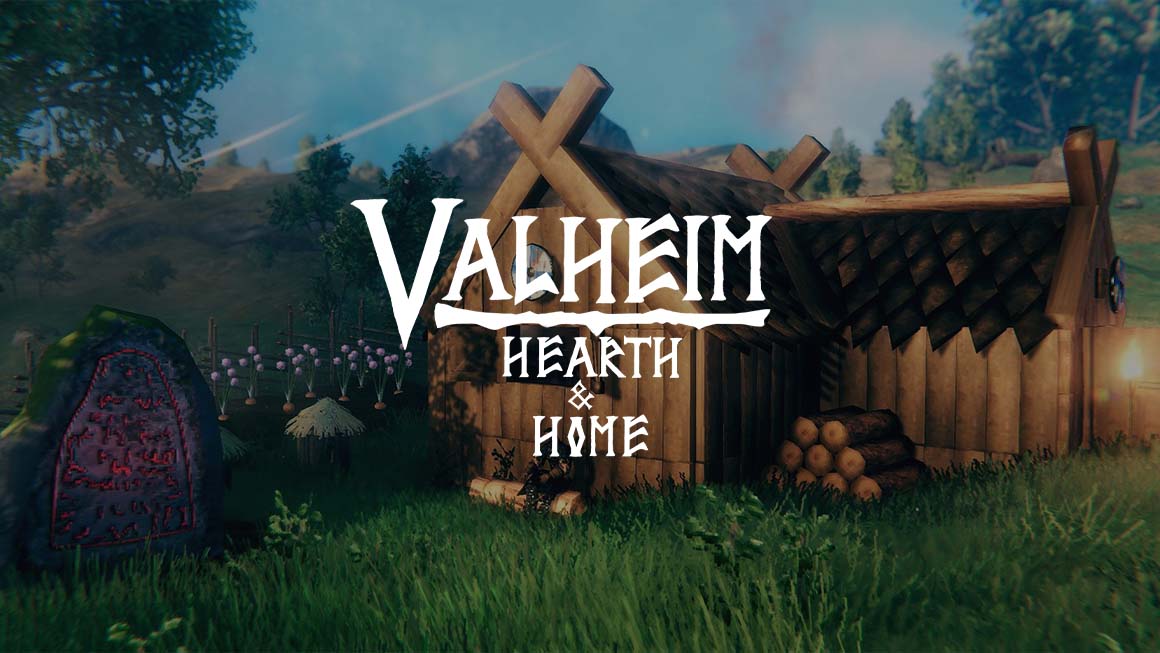 Weapon balance: all weapons were balanced, to be more appropriate as a primary weapon, and also have more unique play styles.
I don't know what they changed there, I didn't really notice the difference.

Block system: current max health now heavily affects your ability to block attacks, added daze graphical interface.
In short, now, an attack hitting the player fills the daze bar, which appears next to the character when taking damage, and if it fills up, then the character will be stunned. I understand the daze – this character cannot do anything for a couple of seconds. Unnecessary mechanics absolutely. 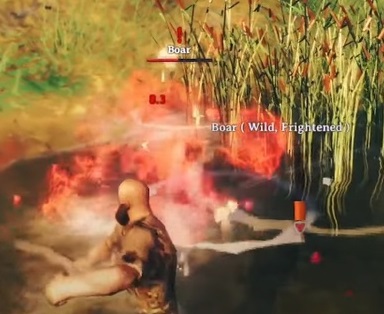 Pets: now tamed creatures can be named and can only be killed with a butcher knife, if pvp is off.
Vryatli names come in handy when breeding wild boars in herds, but if you have one or two wolves, why not, and about murders… Mechanics purely for the atmosphere, again, there is no special meaning in it. 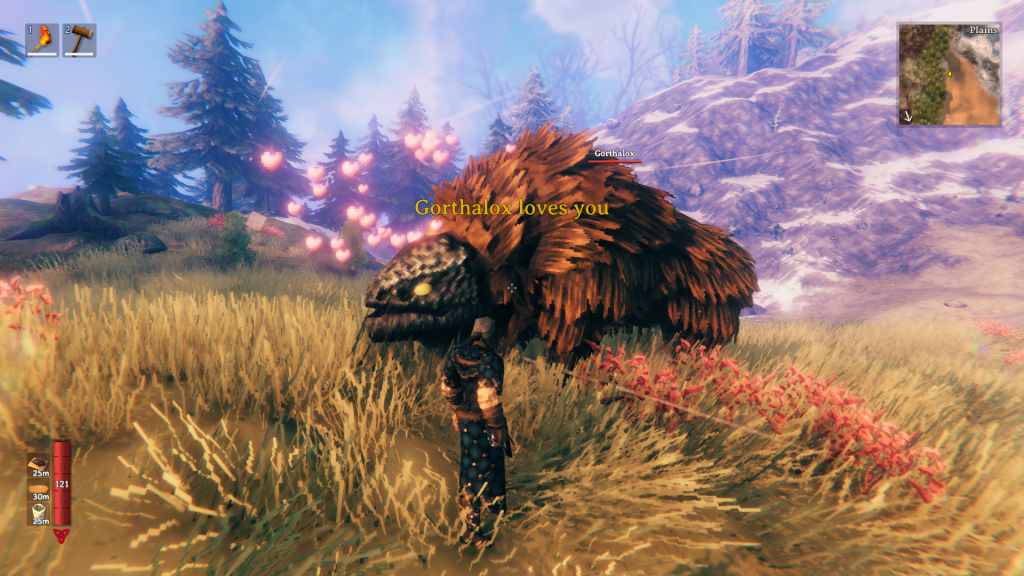 Settings: added settings for light sources and shadows from them to the graphics settings, and also added settings for auto-picking items and controller sensitivity.
As soon as I entered the game after downloading PiH, immediately went into the settings and was pleasantly surprised. I do not know what made the developers abandon the mouse sensitivity setting earlier, but me this sense (sensitivity) not enough. I also noticed an increase in FPS, developed on optimization work. About auto-picking items – I do not advise turning it off, I don't even know why this switch was made.

Bykoyasters: tamed bull lashers now have a target.
This is a description from the developers. I understand that, now the bull lasters can be given commands, a type “sit”, “voice” or “drive for a beer”. If so, then I'm only for. When I was already completing the manual, I found out, what can you do a saddle and ride a bull lizard. This is very cool. 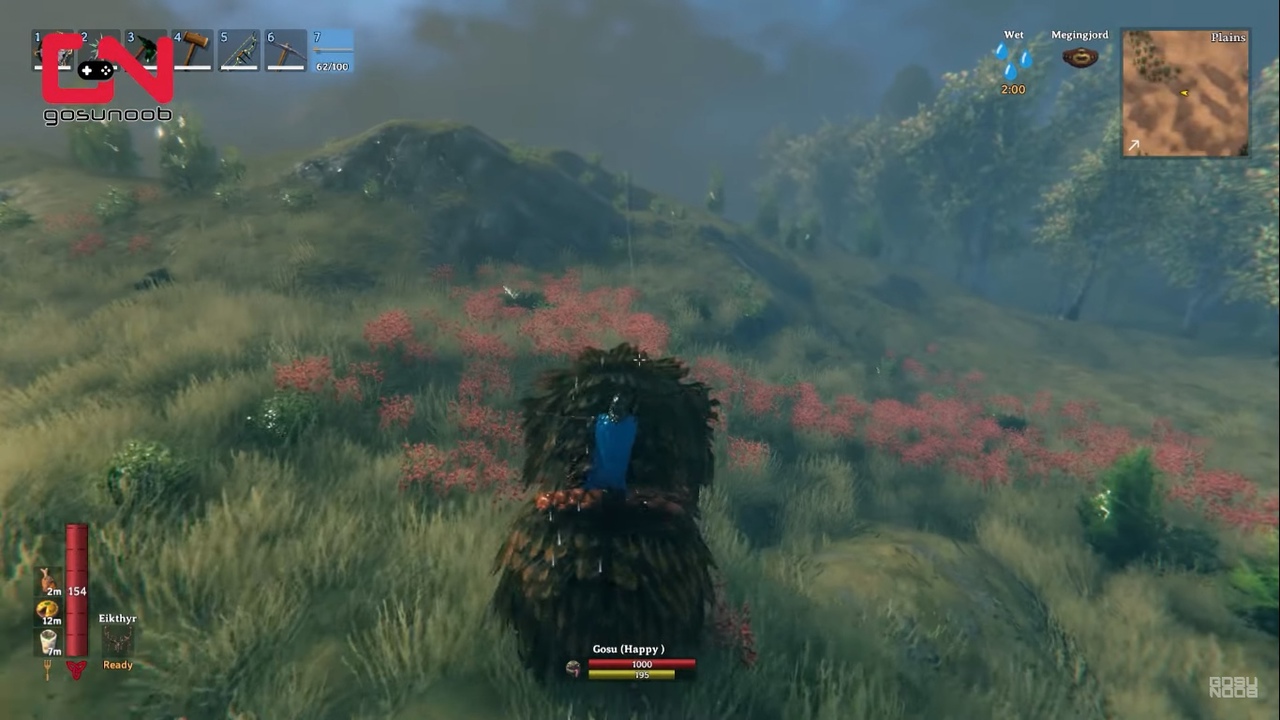 Tar: Added tar creatures and tar springs to the plains.
At first I thought, what is it oil. But, deepening, and, I thought “where did the vikings get the oil”, came to the conclusion that it is tar. You can make incredibly beautiful wood from it., which I will talk about later. 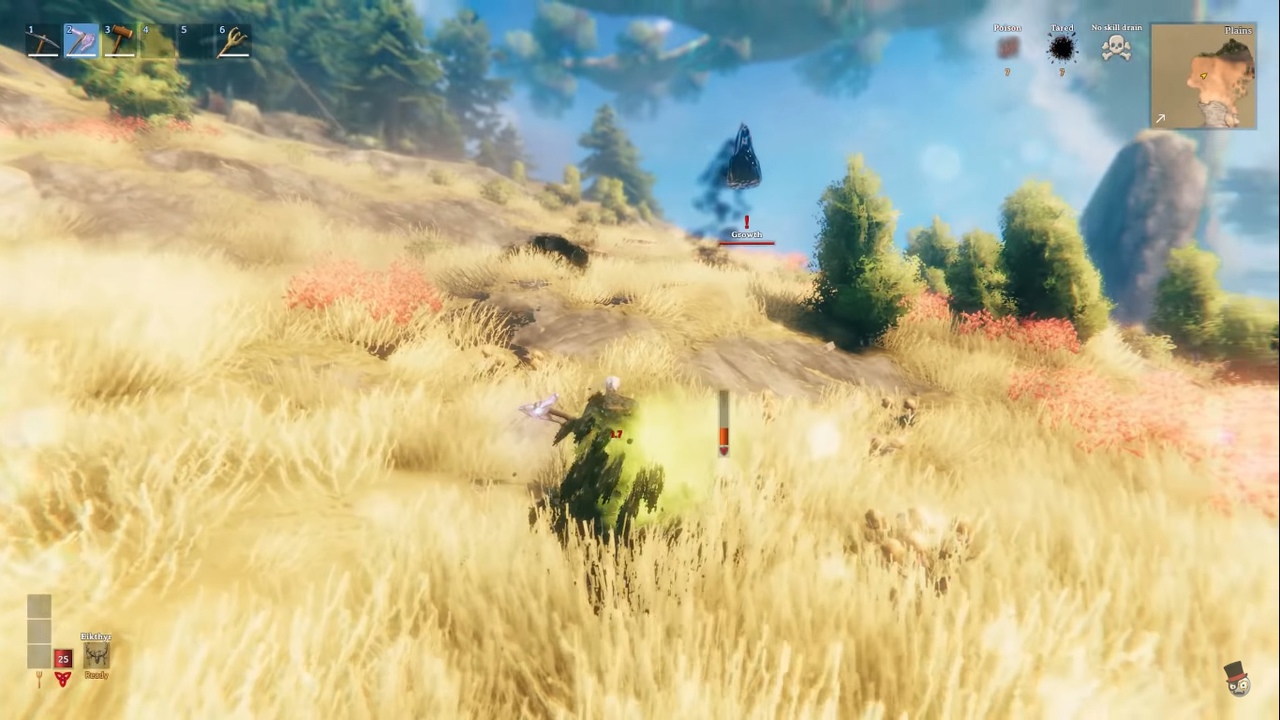 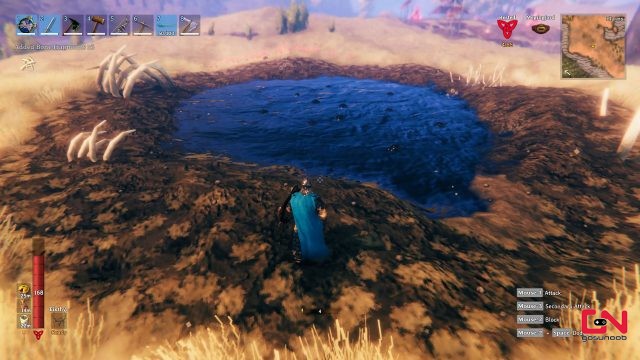 Seeds: added oak seeds, birch and onion.
As for me, cool. Oaks and birches – trees, deserving places in the castle garden. And the onion generally looks beautiful and new recipes have been added with it., which made me a little happy. 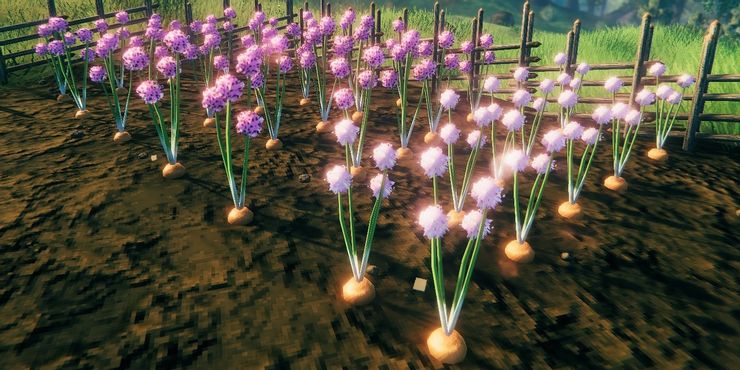 Clothes for the worthy 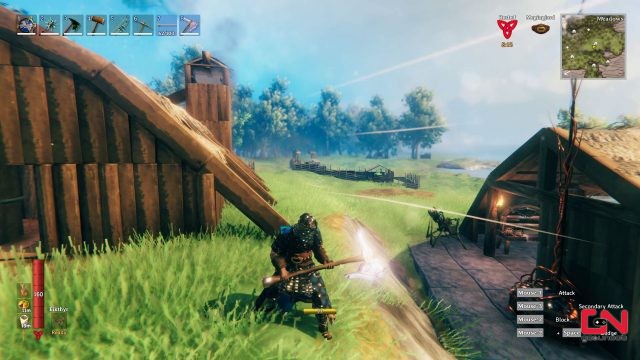 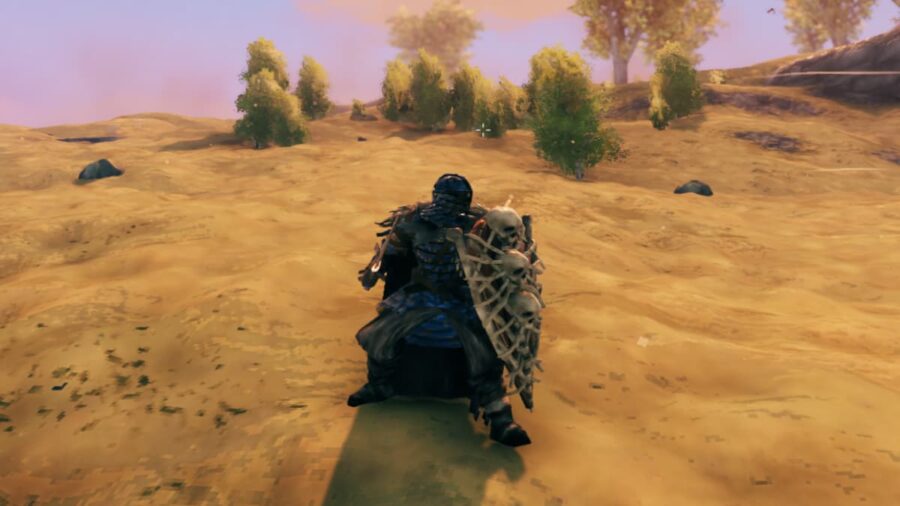 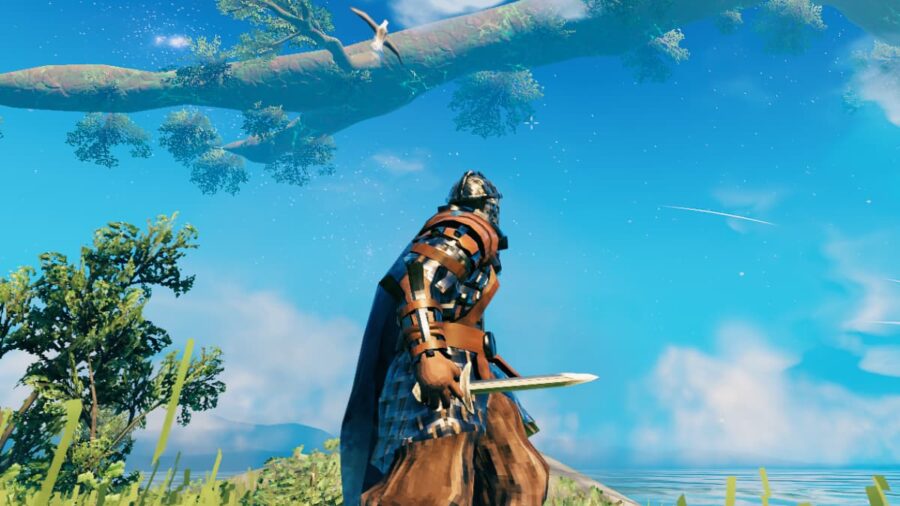 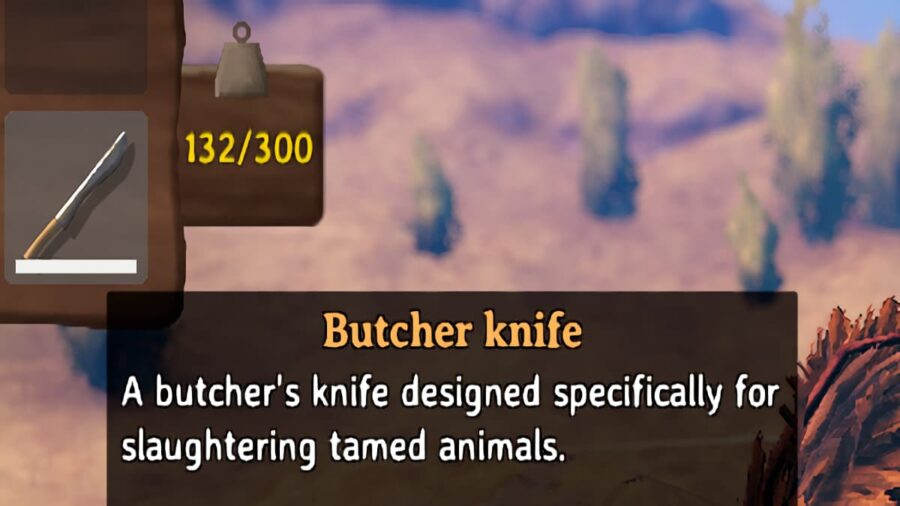 An item has also been added, merchant – Thunder stone (thunder stone). It can be used to destroy unnecessary items., which was sorely lacking before. 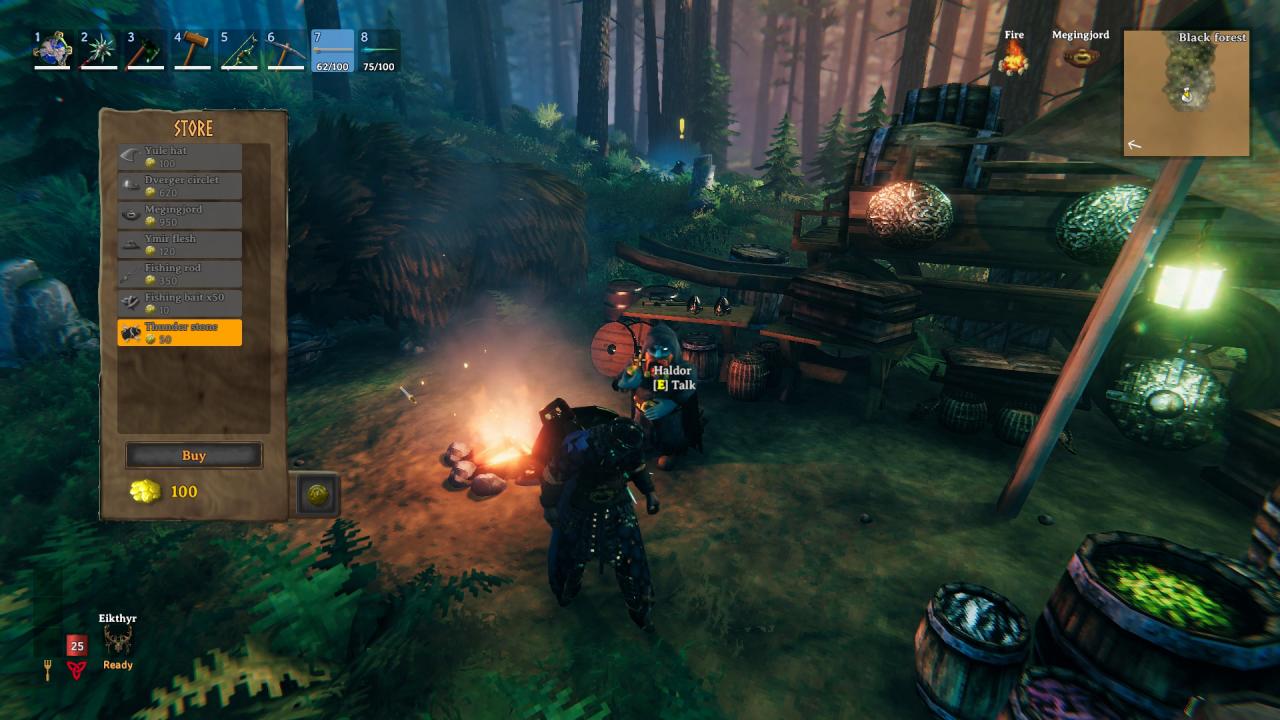 Ah yes, I almost forgot. A certain Lox accessory is also added to the game. (bull lizard accessory), and it looks like it means a saddle. 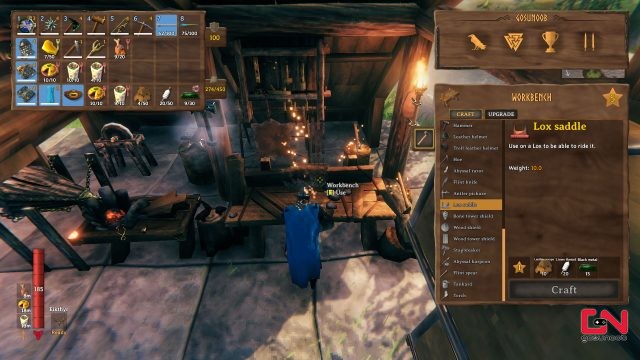 After a delicious lunch…

In PiHe changed the mechanics of power supply. Removed the multi-colored strip, which showed how much health each eaten product gives. Now we write the number of minutes on the icon of the consumed food, which food will give you a health and energy bonus. 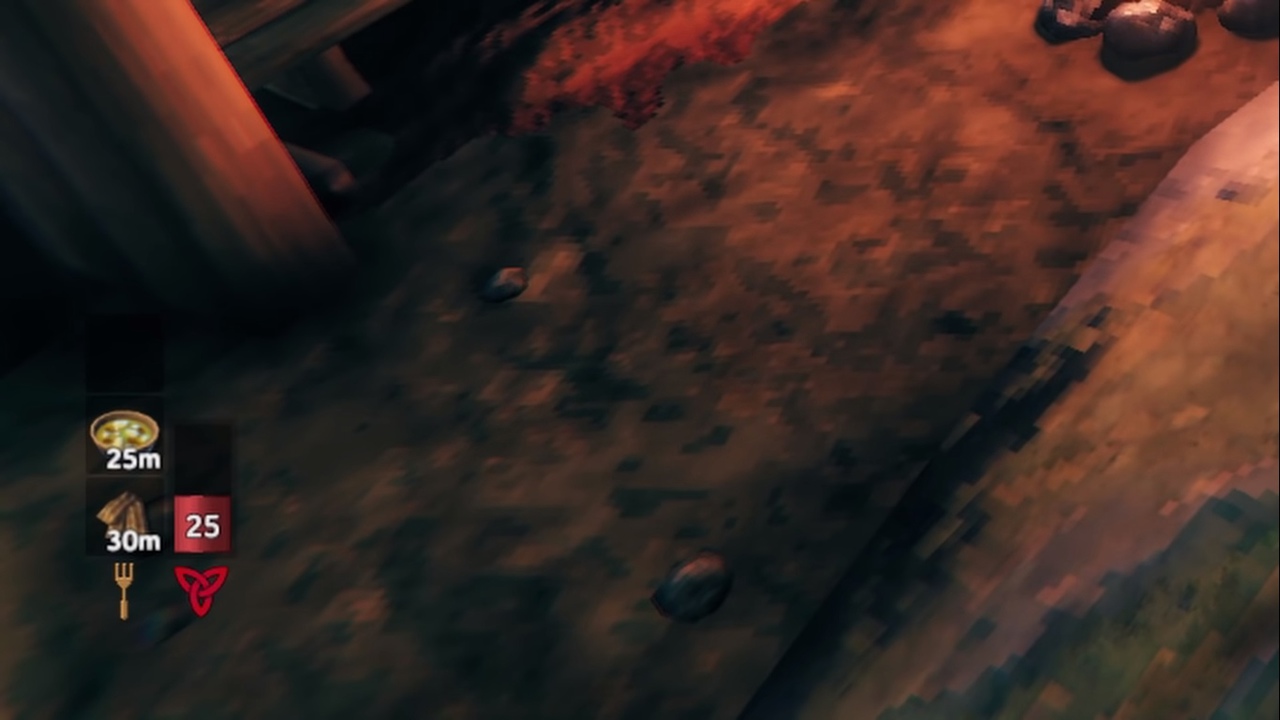 The food icon in the inventory now has a fork, which identifies food as either providing more energy, rather than health (yellow icon), or as giving more health, rather than energy (red icon), or giving them in approximately equal proportions (white icon). 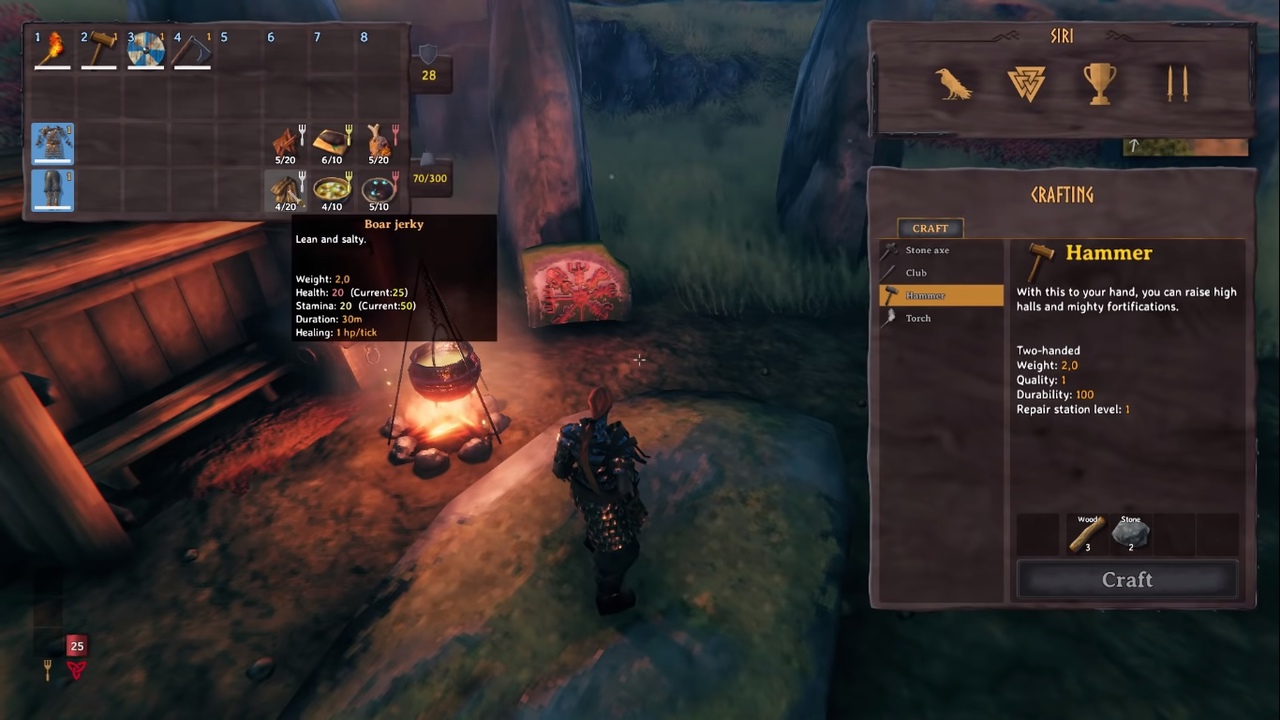 Developed claim, that such a system should encourage the player to choose more balanced food. They also added something like a dozen new dishes.. 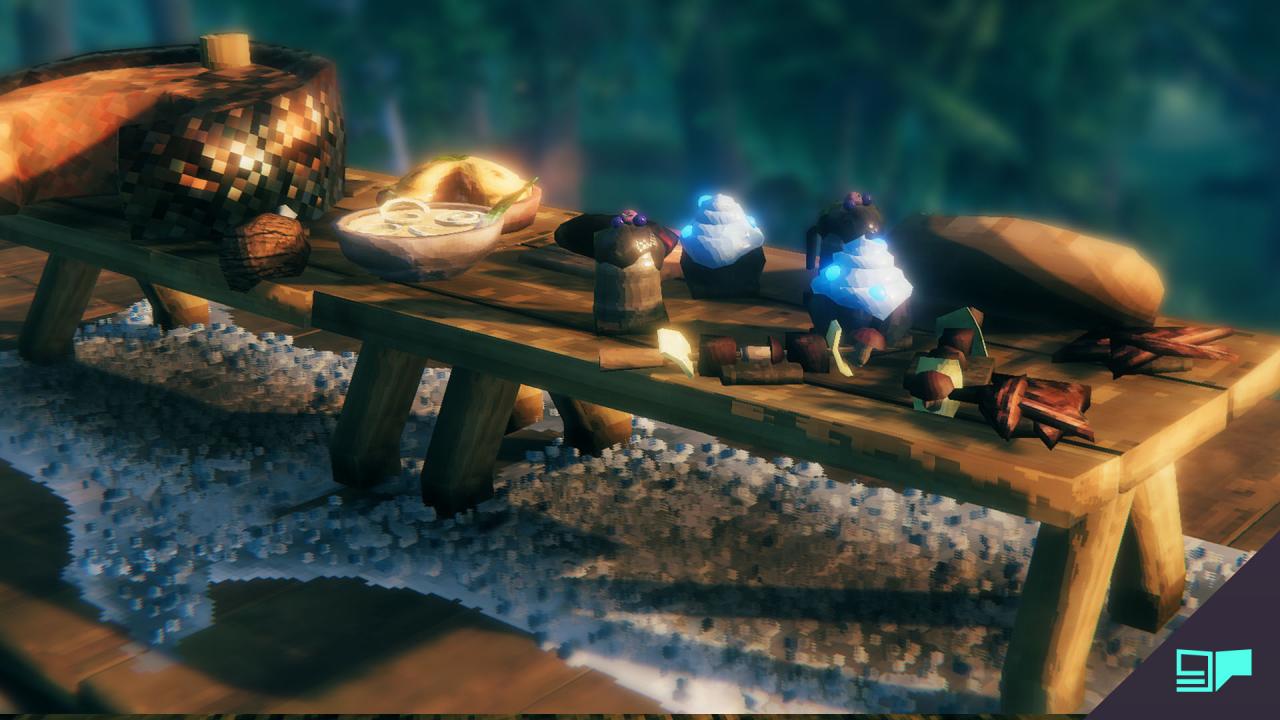 As for me it's great. Only there are a couple of changes, which I met with my own hand in the game.

Emetic (or something similar): added a berry, which drops from shaman graydwarves and with its help you can free the stomach for pouring new food into it.
No words, only emotions. truth, maybe there are people, who desperately need this berry.

Splitting meat: divided raw meat into boar and deer.
Such a change of itself. Is that now, at the initial stages of the game, reindeer meat will be more expensive than wild boar.

…Set up your house with a neighbor

So we got to the most important change in PiH.

Dark wood: added a new type of wood, which is made from tar and used to build roofs, beams, accessories and more.
Dark wood looks cool, especially roofs. 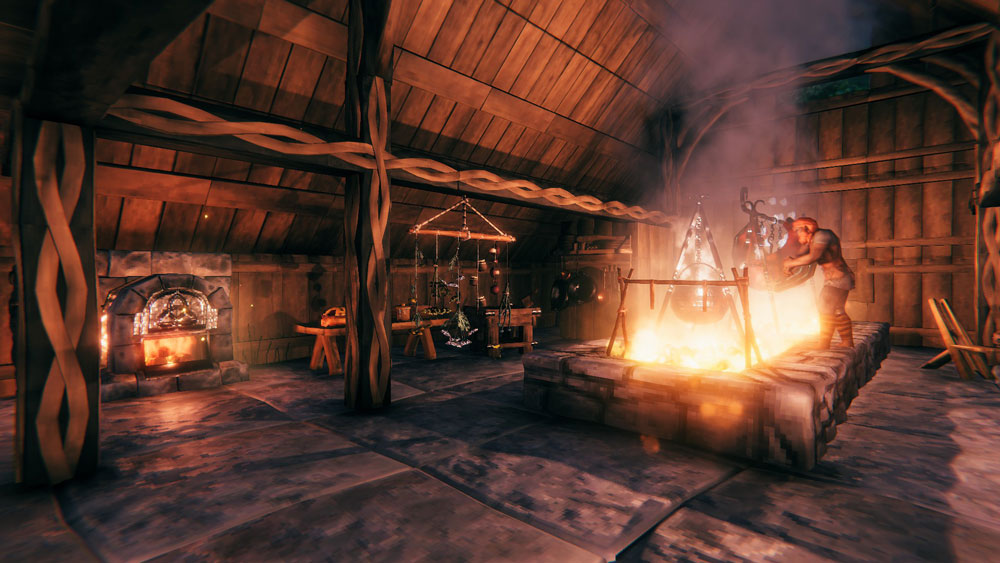 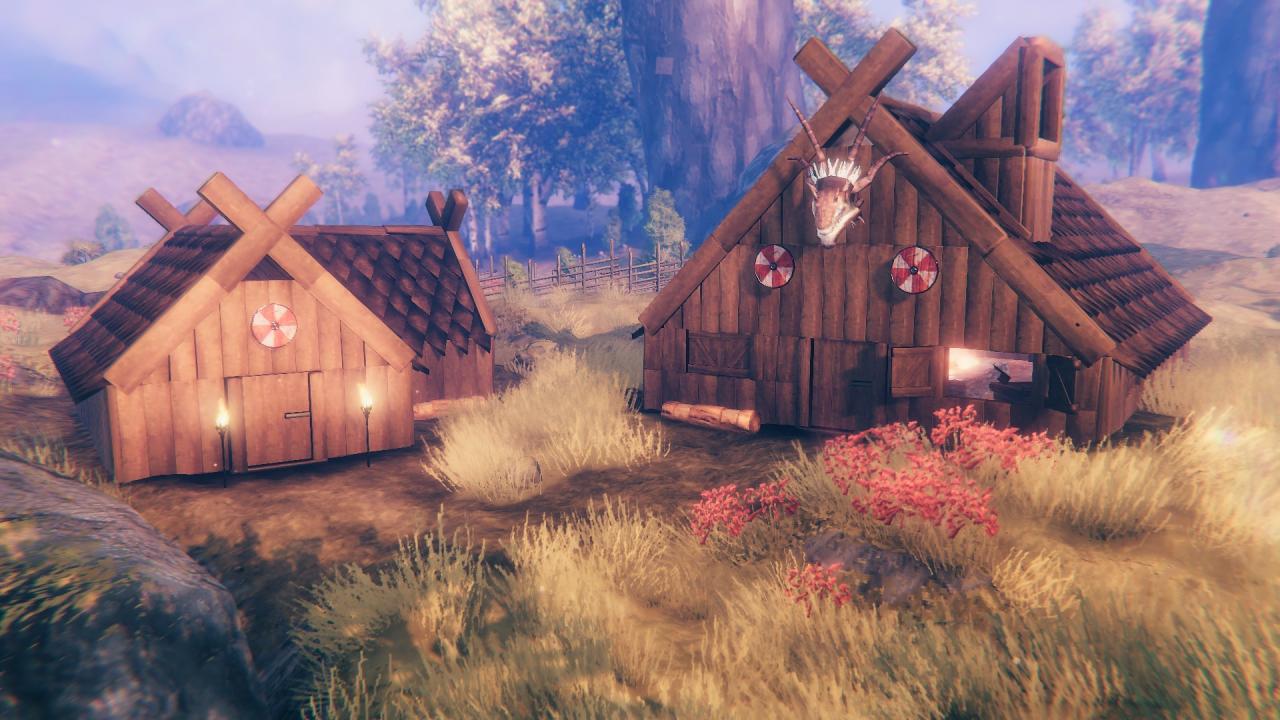 New furniture: stone throne, bath, log bench, joints, inverted corners, walls 1x1 meter and much more.
I could not find a complete list, but who needs it, if now we have a fucking bath. 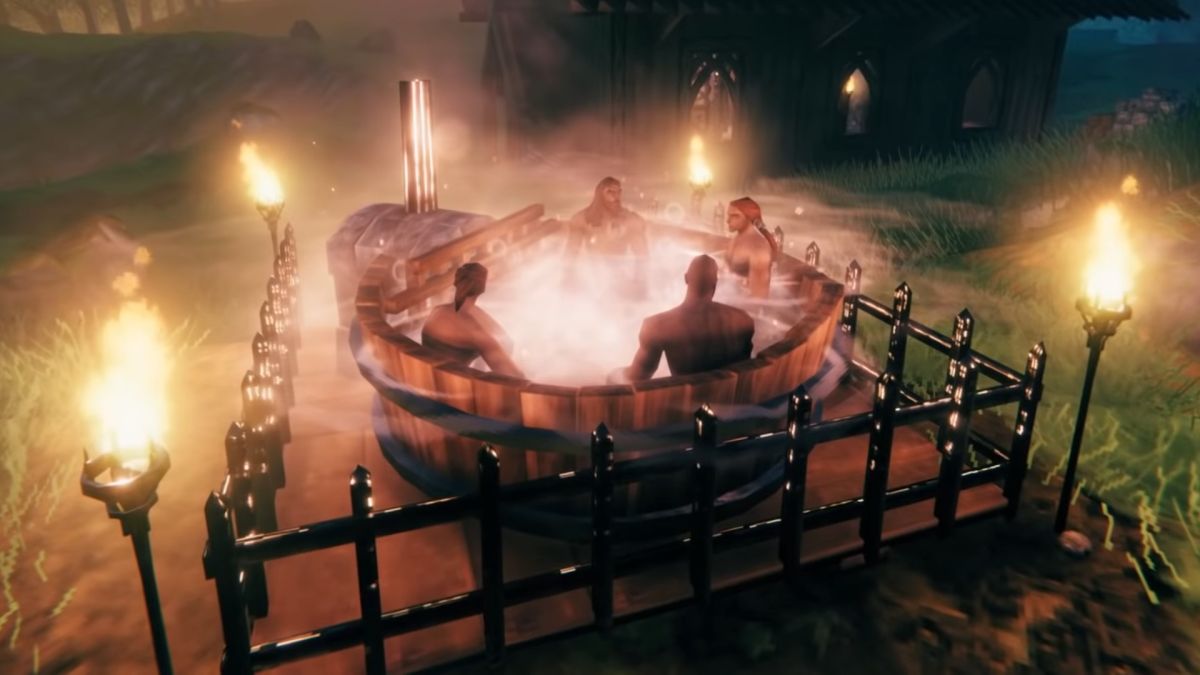 Crystal walls: added crystal walls.
I won't say anything here. I didn't even find screenshots with these walls.

Bowler hat: there are now improvements for the bowler hat, like other craft racks (spice rack, butcher's table, pots and pans).
Well, since a bunch of changes have happened in cooking, then it was to be expected. And at the boiler, as, eg, at the workbench, there are two tabs: craft and upgrade. Seem to be, now you can improve food, but it is not exactly. 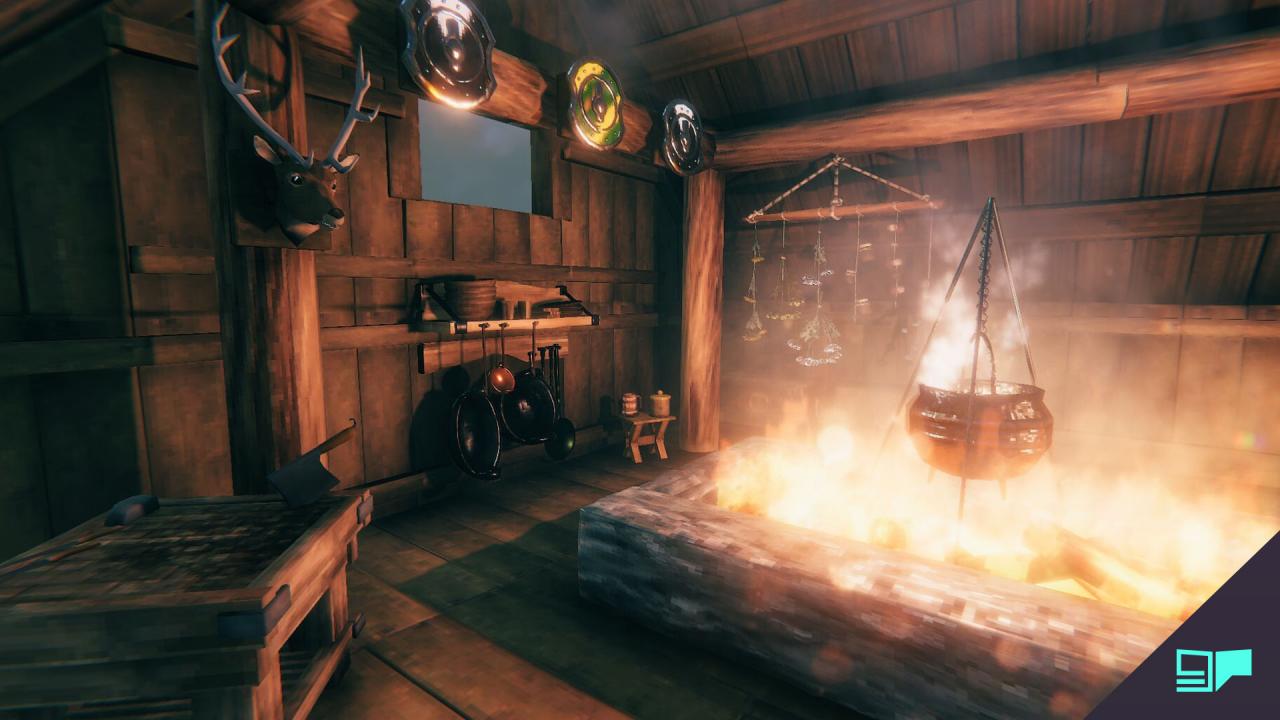 Oven: added oven for baking bread.
This is really cool. Bread was somehow forgotten in previous versions of the game.. 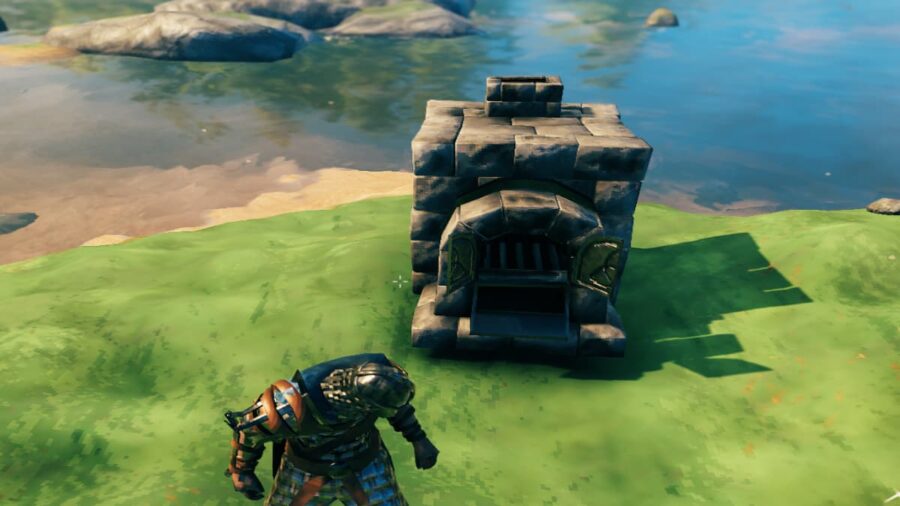 Kitchen counter: Well, our cooking parade ends with a kitchen station, which is used to cook certain types of meat.
It is unnecessary. Once the boiler upgrades have been added, then let's cook meat in a cauldron. What made the developers add this I have no idea. 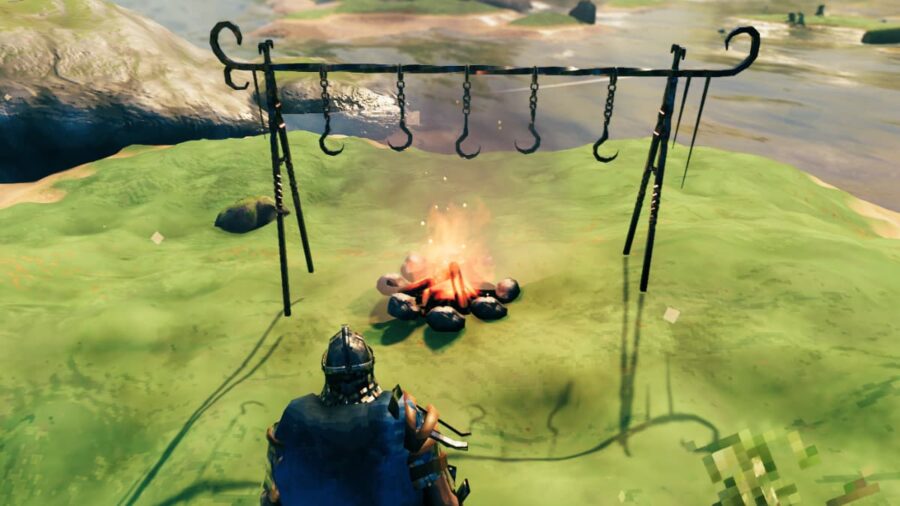 Cartographer's table: added a table for transferring map data to other players.
One of the most useful additions to PiH. It used to be really lacking. 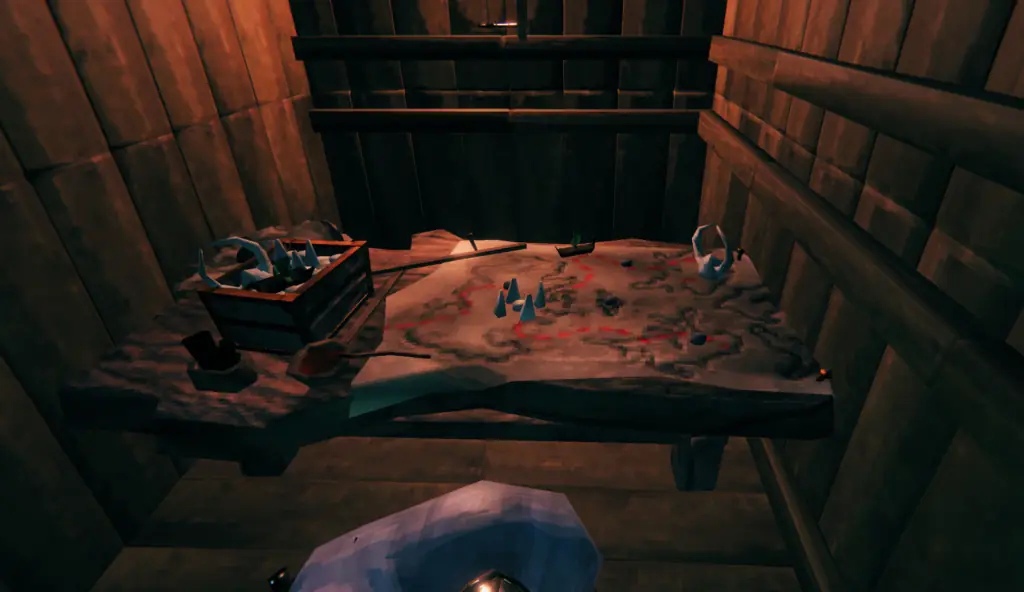 Destroyer: the aforementioned thunder stone, merchant, used to craft this item, which allows you to destroy unnecessary items.
As I already said, this is the long-awaited appearance of the trash can in the game. 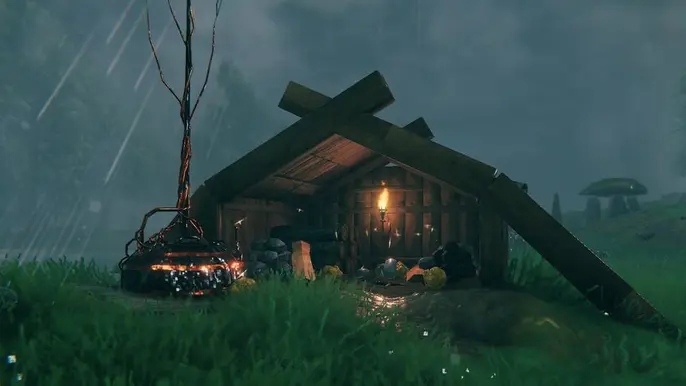 What are my impressions? Positive. There are things that are useful, so beautiful. There are those that combine beauty and efficiency. There are absolutely unnecessary.

This is a big update – this is a big step for valheim. The developers have fixed most of the bugs and added everything, what you need to live comfortably in the tenth world.

All inconsistencies, which you found in my manual, as well as, if you have explanation and screenshots to crystal wall and other things, who were left without explanation – throw everything in the comments or in my personal. But better in comments. Well, share your opinion about PiH.

See you at the Wolf Gang update (Cult of the Wolf).