An introduction to the game for dummies

In this guide you will find:

Features of the combat system

Control in the game is carried out mainly by buttons <J> <K> <U> <I> <L> and it is better to use a joystick as a device. It is quite possible to get high results on the keyboard..

You can also install additional software. for example “X-Mouse Button Control” It will allow you to assign mouse buttons to press keys on your keyboard.

The course of the battle

In battle, the character has at least 2 resources. SP – Ultimate charge, which you will spend on weapon skills or the ultimate itself. И HP. There are few healers in the game, which means it is very important not to get it in the face. This will help you: boss knowledge, mobs, timings, short-term impulses and dodges(K). At the moment before striking the fury of opponents, you will hear a characteristic ringing. At this moment, press <K> and get the perfect dodge effect(At the starting White Comet – time dilation(Further “Frakcha”)).

To deal damage, you have: normal series of attacks, key hold attack, special attacks, ultimate and weapon ability. Before playing the roller(especially Fu-Hua / Scaura) check out the control features of a particular suit.

The game has 4 type of damage(Physical and Magical(Fire / Ice / Lightning)) and 5 character types.
Each enemy has its own type, resistance to its own kind of damage, attacks and is sometimes able to change them.
3 basic types work like rock-paper-scissors(PSY-type>Mech-type>Bio-type).
2 the remaining – Receive bonus damage to themselves, but less inflicted on another. (Qua-type и IMG-type). Basic three and additional types do not receive a bonus to damage between themselves.

Heal packs and SP packs can drop from mobs. Nice bonus in most cases.
Ability <L> will be opened much later. The 4th character will appear in the squad, which will continuously fly nearby, attack enemies and accumulate SP for yourself. They are called Elves(Living weapon shell). All elves have a unique skill.

Honkai has a cast of characters, as well as 2 character collab(Asuka and Fishl).
The character has his own set of costumes, which affects abilities and type of damage / character. 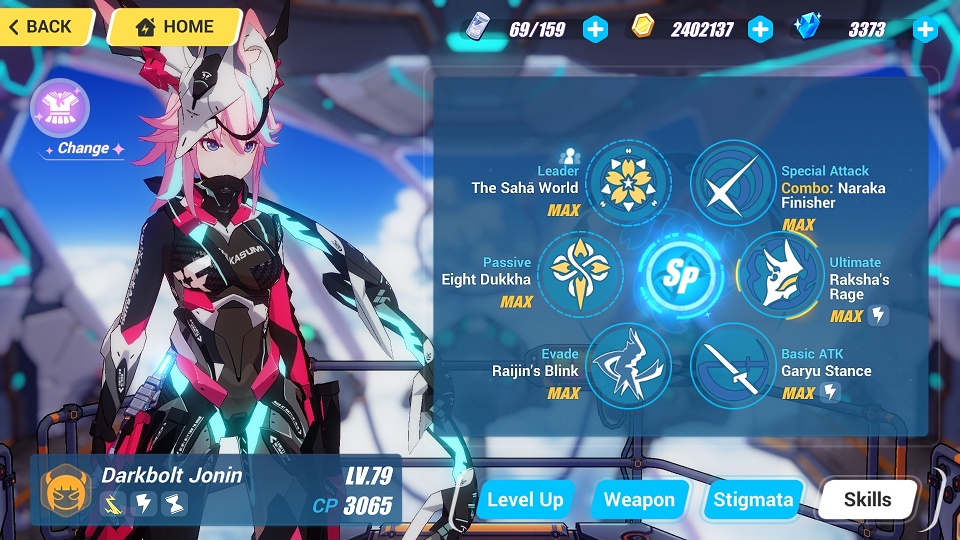 Each roll has 6 main talent trees.
Left-top – Leader. As a rule, the abilities in this section work only if the Valkyrie takes the leftmost position when assembling the squad. (also, when collecting before the battle, under the Valkyries selection window there is a window with a description of the active leader.
Left-center – Liabilities. Various passive features and that's it.
Left-bottom – The door. Ultimate dodge, decrease cd, additional duration, additional proc conditions, etc..
Right-top – Special attacks. Usually holds(key hold). Hold improvement may be located here., battlefield entry effects.
Right-center. Build a hodgepodge of ults and Valkyries features.
Right-bottom. Attacks, set of additional sp, damage to shields, etc..

There are also additional branches of talents. SP Valkyries and “Cubes / Barks”.
SP-Valkyries have an additional skill and its talent tree. (Kunai Darkbolt Jonin, Haxxor drones, etc.)
Cuba – a way to radically change the capabilities of the Valkyrie and even its type of damage. They are difficult and expensive to download., and we can say, what is a suit inside a suit. Some of the skills are replaced with new ones(Immediately pumped, Not all, which means you need to download).

A short guide to rolls

Kiana(She is “tuna”):
Starter suit “White comet”(Mech, physical damage) almost unused: no skills needed, but knows how to carry pistols, which means only to carry superweapons to the battlefield.
“Valkyrie Ranger”(Mech, physical damage) basic equipment is not needed, but you can download it closer to the late game because of its cube.
“Void Drifter”(Cube) – DD. author of several best arena and abyss results! Expensive, hard, angrily. You can download. but there are better options
“Divine Prayer”(PSY,physical / lightning) – In the common people “sofa”. Basic support, which may well be part of your group, if all better physical supports are already blocked. Has a heal for early abies. Normal roll.
“Knight Moonbeam”(Bio, physical) – In the common people “KMB” DD / support. Also the author of excellent arena results as a support. Longest dodge frack in the game(6sec), as well as the usual dodge gives 3 seconds of frack. Huge critshans allows you to collect “paralysis build” for inflicting trash damage in abis.
“Herrscher of the Void”(Byo,physical) – In the common people “Securities”. DD. The very first herrscher and as a consequence weak. Can give good results, but inferior to HoC and rather a damaging support for her.
“Ruler of Flamescion”(PSY, the fire) – In the common people “HoF / HoFs”. The best fire damage dealer in the game at the time of writing the guides, interesting combat mechanics, shields. I highly recommendMay:
“Crimson Impuls”(Bio,physical), “ShadowDash”(Mech,physical) – Not used
“Danzai”(Cube) – Not used
“Valkyrie Bladestrike”(Bio,physical) – such. Download for a local spill bagel.
“Electrocuted”(Cube) – for a local bagel
“Lightning Empress”(PSY,lightning) – In the common people “LE”. VERY strong arena leader
“Herrsher of Thunder”(PSY,lightning) – In the common people “Hot / Tandoor”. Best lightning DD game. Is in the starting gacha, used in bagel. Good to everyone! Download and dress!

Armor
It's easier to describe it in reverse order..
Makes almost no sense – “Black Nucleus”(Bio, physical), “Dimension Breaker”(Mech, physical)
Can be used in abis or arena: “Valkyrie Chariot”(support, has a screed), “Snowy Sniper”(Bio, physical)(sometimes physical support in abis), “Wolf’s Dawn”(PSY, physical)(essentially like a sniper)
“Yamabuki Armor”(PSY, physical) – excellent physical support for militia. Saves from getting in the face
“Drive comet”(Cube) – An even better version of yourself. Highly recommend for leveling.
“Haxxor Bunny”(PSY, ice) – good ice support. Download as needed.
“Herrscher of Reason”(Mech, ice) – 1 of the best ice dd games. If knocked out – excellent. Easy to dress without gacha.

Himeko
Is 2handler, which means he can wear Blood Dance = good support mage.
Application have:
“Vermilion Knight: Eclipse”(Mech, the fire) – Fire dd, if there is no HoF, you can download. Will give good results in abis and arena.
“Blood Rose”(PSY, the fire) – almost the same, but less damage.

Theresa
“Valkyrie Pledge”(PSY, lightning) – knows how to wear a cross.
“Luna children”(Bio, physical) – not only wears a cross, but also good damage in a bagel. You can try in the abis, but there are better ones.
“Sakuno Rondo”(PSY, fire) – when leveling up, it becomes a top-3 fire support. Used with HoF.
“Startlit Astrologos”(Bio, physical) – gorgeous physical support, damages well and generally open and download as soon as possible.
“Purple Run”(Mech, physical) – dd above average. There is a gorgeous cube.
“Twilight Paladin”(Cube) – excellent mech-fiz DD, author of several gorgeous scors in the arena. Excellent dps in 1 goal. It is worth thinking about pumping.
“Celestial Hymn”(Bio, physical) – The best physical support in the game(only catches up with HoC). Huge damage buff. It's hard to download, better pay attention to the astrologer, and the anthem as far as possible.

Fu Hua
“Night Squire”(Bio, physical) – seems not bad, can give medium and lower damage. Problem – does not hold competition
“Valkyrie Accipiter”(PSY, physical) – Valka herself is about nothing, but! There is a cube.
“Hawk of the Fog”(Cube, lightning) – Top 4 lightning dd games! All stigmas ftp! You can give a good speed.
“Phoenix”(PSY, the fire) – There are cheap analogues, but can log in as a fire support.
“Shadow Knight”(Mech, lightning) – Due to the nature of the costume, it gives several one-shots in the abis or arena. Also her weapons and stigmas are good on VA cube..
“Azure Empyrea”(PSY, fire) – Or easier, azure. BEST mage support in the game. There is a screed of buffs, floods the joint venture. Twist, dress – excellent roll.
“Ruler of Sentience”(Bio, physical) – Someone says, that she is a support. They are right. She will help the team, killing everyone, whom does he see. Excellent roll, can support like a hymn

Rita
“Umbral Rose”(PSY, physical) – such a dd
“Phantom Iron”(Mech, lightning) – plug on the support lightning slot
“Fallen Rosemary”(VIA, lightning) – Very good lightning support(Possibly the best). It's a good idea to get it for your Tandoor..
“Argent Knight: Artemis”(Bio, ice) – Top-3/4 ice damger. Dropped out – OK. Not – that's all right. Easy to dress.

Sakura
“Gyakushinn Miko”(Bio, physical) – mediocre physical dd
“Flame Sakitama”(Bio, the fire) – Good fire dd. If there is an opportunity to download – swing. Not of paramount importance.
“Darkbolt Jonin”(Bio, lightning) – Or “DJ”. Highly. Picture. Expensive. Top 3 lining dd, but! It takes too much to invest. May come in handy in late game, but rather VA.
“Goushinnso Memento”(Mech, ice) – Can give a good speed, but still top-4 ice dd. It's easy to dress

Kalen
“Imayoh ritual”(Mech, physical) – Well, useful in a bagel…?
“Sunderjager”(Mech, physical) – Can be given dps, but there are better options. It's worth downloading from the open world award
“Sixth Serenade”(PSY, ice) – You can give damage, but it's not worth it.

Oleneva sisters
Lily<“Blueberry Blitz”>(Mech, physical / ice) – Author of several excellent arena and abis results. She will swing herself from the gacha. But if suddenly, has the meaning
Rosalia<“Molotov Cherry”>(PSY, physical) – unlucky sister. BUT! There is a cube
“Fervent Time Delta”(PSY, physical) – EXCELLENT physical dd. Difficult and expensive, but it's worth it.

Durandal(Duck)
“Valkyrie Gloria”(VIA, fire) – can cause fire damage, there is in the bagel. View by visual.
“Bright Knight: Excelsis”(Mech, physical) – recently learned to shoot.
“Goddess of the Anchor”(Bio, fire) – can give out something.

In Game 3 type of body kit for your rolls. 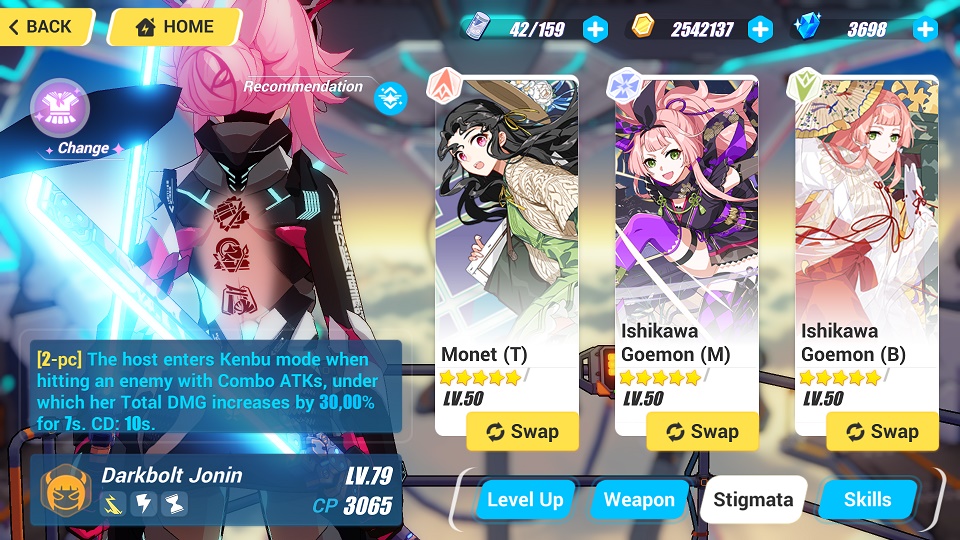 Honkai players are divided into 2 kind: “Strength in stigmas” and “Power in guns” I'm from 2
Every stigma has a slot(Left – “Top / T / Top”, Middle – “Mid / M / Medium”, Right – “Bot / B / Lower”). For example, the stigma on the screen is described as “CoinTop2SetIshikawa” or “CoinTopIsikivaMidBot”.

Each stigma has a set of bonus characteristics, as well as a unique property. Often there is also a set bonus(set bonus).
You can read about each on the very stigma.
Together with pumping, characteristics and numerical values ​​of properties are also enhanced.. Set bonuses do not depend on leveling.
As a rule, on the stigma above the description of the properties there is a designation of the type of damage of the Valkyrie, for whom this stigma suits.

Affixes(Affix(it is)) – additional characteristics, which can increase stigma. They are determined randomly and can be overwritten for a separate currency. (rarely come in handy)

Supporter stigma(some work only in pairs) 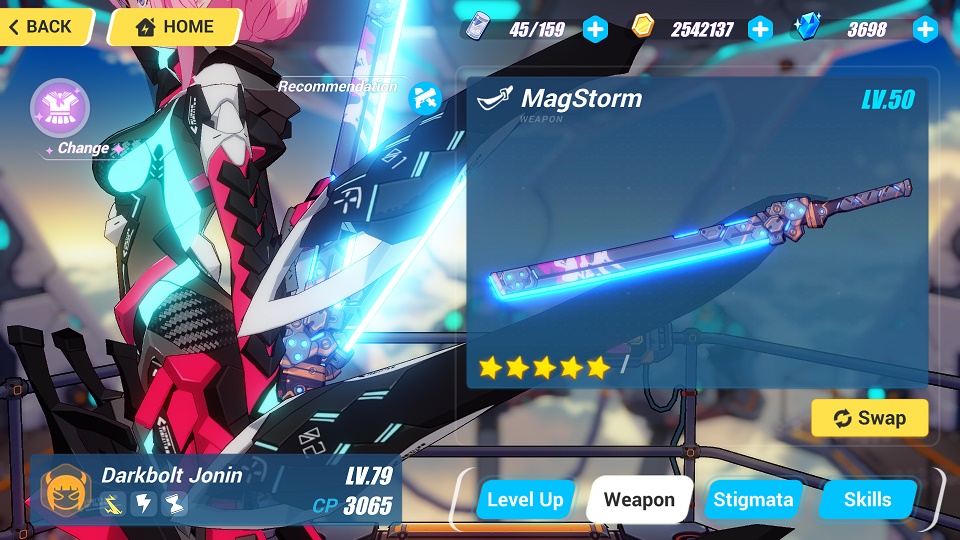 Weapons work as the 4th stigma, but
1)A single type of weapon is assigned to each roller
2)There are active abilities

Elves:
Look at builds. For a long time you will have 2 pieces:
Jingwei’s Wings(Hiller)
Blood Embrace(Physical support)