Hello everyone, here I will tell you how to turn you from a beginner into a pro, but you just need to run a little stalkers. 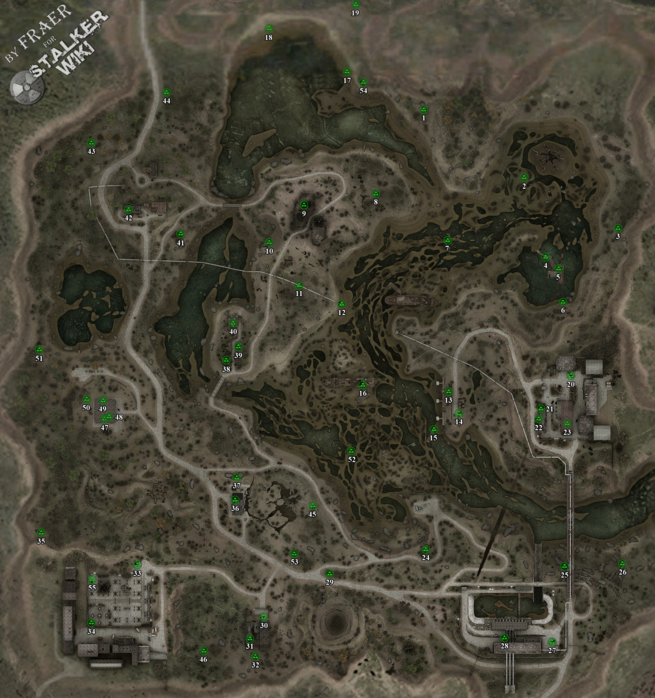 More accurate information
1- In the bushes under the stone, east of the large lake in the north of the location.
2- Under the stones, on the way to the archianomaly from Skadovsk on the left.
3- On the tree, to the right of the Dredger, if you look at the map. To pick up content, he will have to be shot down (can be knocked down with bolt "6", so as not to damage).
4- Under the iron slab of the track to the Dredger.
5- In the hold of the Dredger. To get there, need to break the box, locking the door.
6- On the tree, behind anomalies "springboard".
7- In the bushes, at a distance from "Skadovsk".
8- In the bushes, next to a dangerous cave.
9- In the attic of the northern burnt house.
10- In the bushes under the stone, not far from the burnt-out farm.
11- On the pipe stalk, not far from the cave under the burnt-out farm.
12- Under a concrete roof, where the pipes end, not far from Skadovsk.
13- On the first tap (on the way from Skadovsk), from the opposite side, where is the staircase.
14- In the cab of the truck.
15- In the cockpit of a motor boat, at the bottom of port cranes.
16- In front of the barge, in those. the premises, on the far right side.
17- Under the bridge, northeast of the big lake.
18- In the bushes, north of the big lake.
19- Located at the northernmost point of the location.
20- In the back of a truck.
21- In the attic of the building on the right, stairs lead there.
22- In the same building, the cache is marked with an atom sign. One of the three caches of the "Monolith" on the Zaton.
23- In the third unit, in the central building.
24- On the roof of the bandits' halt, behind the old barge.
25- Behind the stones under the bridge on the right, next to the car that fell down.
26- Under the stones, far from their bridge. Preobrazhensky, on the outskirts of Zaton. One of the bandages "rooted" into the stone, and it can only be picked up using bolts, hand or underbarrel grenades.
27- In the spare iron pocket of the truck, between the cab and the body.
28- Top on the extreme pipe on the right. To get there, you need to use the hole, there is an open entrance inside the room in the pipe.
29- On the tree, before a halt next to archianomaly.
30- Under the car seat.
31- On the beam from above, above the room on the right.
32- On the tree, behind the workshops.
33- In the cab of the truck, behind the fence
34- Under the table, at the entrance inside the building, leading to the test shop.
35- On the tree, not far from the archianomaly "Iron Forest".
36-On the roof of the gas station.
37- Under the stones in front of the gas station.
38- In the first house on the left.
39- Under the third house on the right.
40-On the roof of the concert stand, in the crevice.
41- Next to the stones, southeast of the sawmill.
42-In the tractor, in the south building. First aid kit
43- Under the tree, near the sawmill, to the left of the road, leading north.
44- Under the tree, next to the aforementioned road, on the right side.
45- In the bushes under the stone, next to the halt and archianomaly.
46-On the tree, between the workshops of the substation and the "Iron Forest" archianomaly.
47- In the second electrical panel, on the left side of the building. One of the three caches of the "Monolith" on the Zaton.
48- Under an inclined staircase, leading to the basement.
49- On the topmost shelf of the rack, in the right room of the building.
50-In a dead end sewer, on the other side of the basement exit.
51- In the bushes, not far from Topi.
52- In the bushes, south of Shevchenko.
53- On the tree, between archianomalies "Claw" and "Circus".
54- Under the tree, to the left of the large lake in the north of the location.
55- On a railroad track from above, in front of the test room with a gauss prototype. One of the three caches of the "Monolith" on the Zaton.
From Vudu