This guide – addition to Guide from Csandro. All infa in it is devoted only to hidden achievements in the game and easy or other ways to get them..

Total Inscryption 30 achievements. Most of them you will receive during the game for this you do not need to do anything. Only 9 of which must be mined separately.

These nine achievements will be discussed in this guide.. Here I have collected life hacks, which will help you achieve some achievements in an easier way, than indicated in bagpipes from Csandro.

Also in this guide I show, how to make an infinite Ouroboros - the fiercest card, which will greatly help you in the game.

Of course, this guide contains spoilers.. Therefore, I do not recommend reading it., if you haven't finished the game yet.

How to get the Squirrel Rider reward

Win a duel with squirrel damage.

Generally it is considered, that winning a fight with squirrel damage is inflicting lethal damage with a squirrel. But in my opinion, I was given this achievement, when I just won the fight by doing some protein damage (correct me in the comments, if I am wrong).

Squirrel is a free map 0/1, which is given in an additional deck, therefore it cannot be pumped at the stake. However, there are several ways to give an attack to a squirrel.. 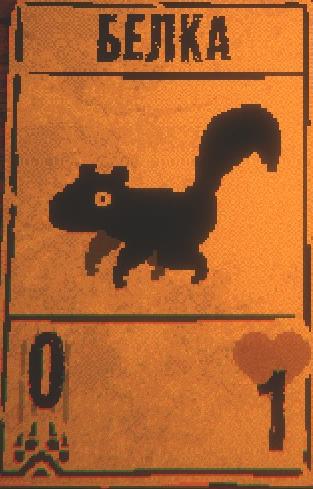 Take the card Alpha 1/2, which gives one attack to creatures on the left and on the right: 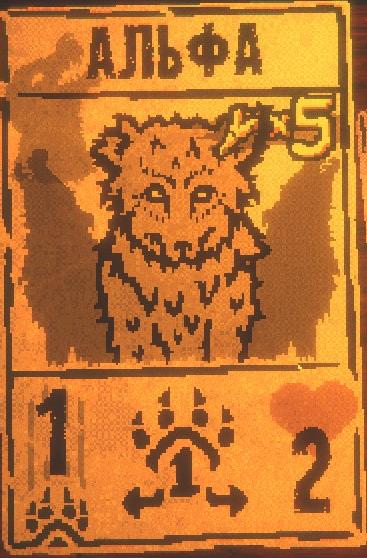 Take ability “Detonysh” at the totem carver and collect a totem with a squirrel head, which can be found in the puzzle box on the right: 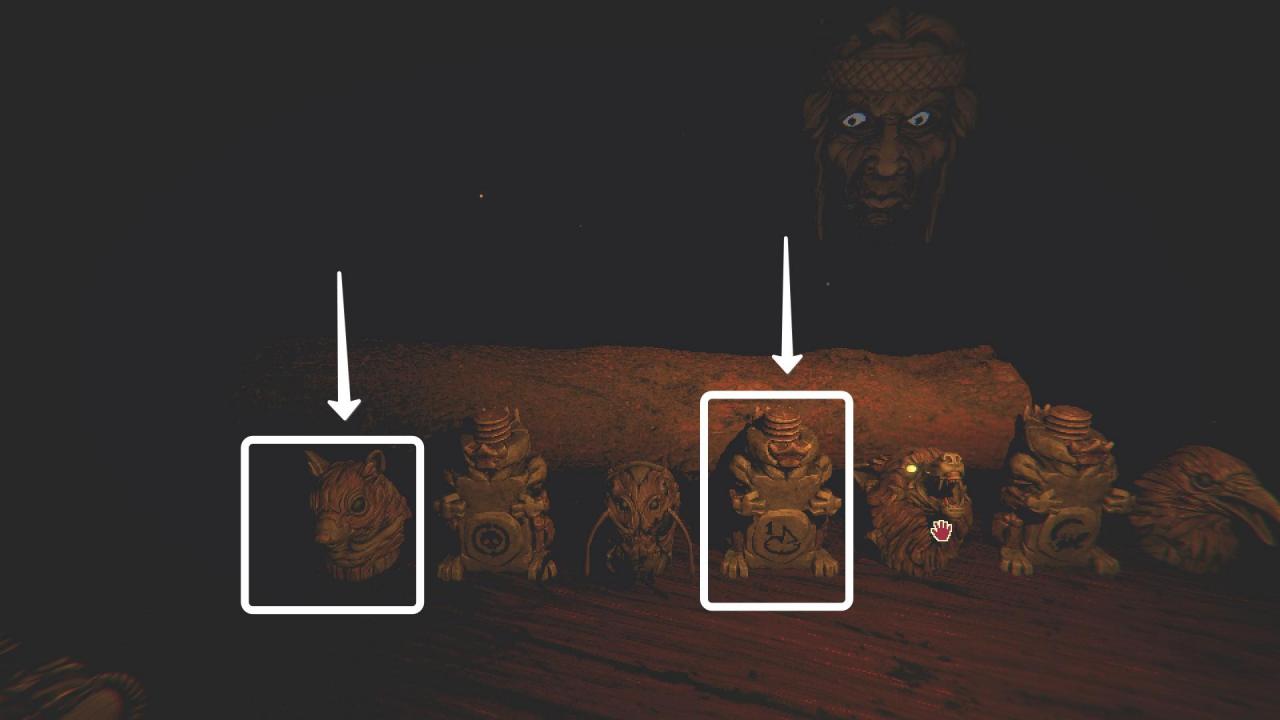 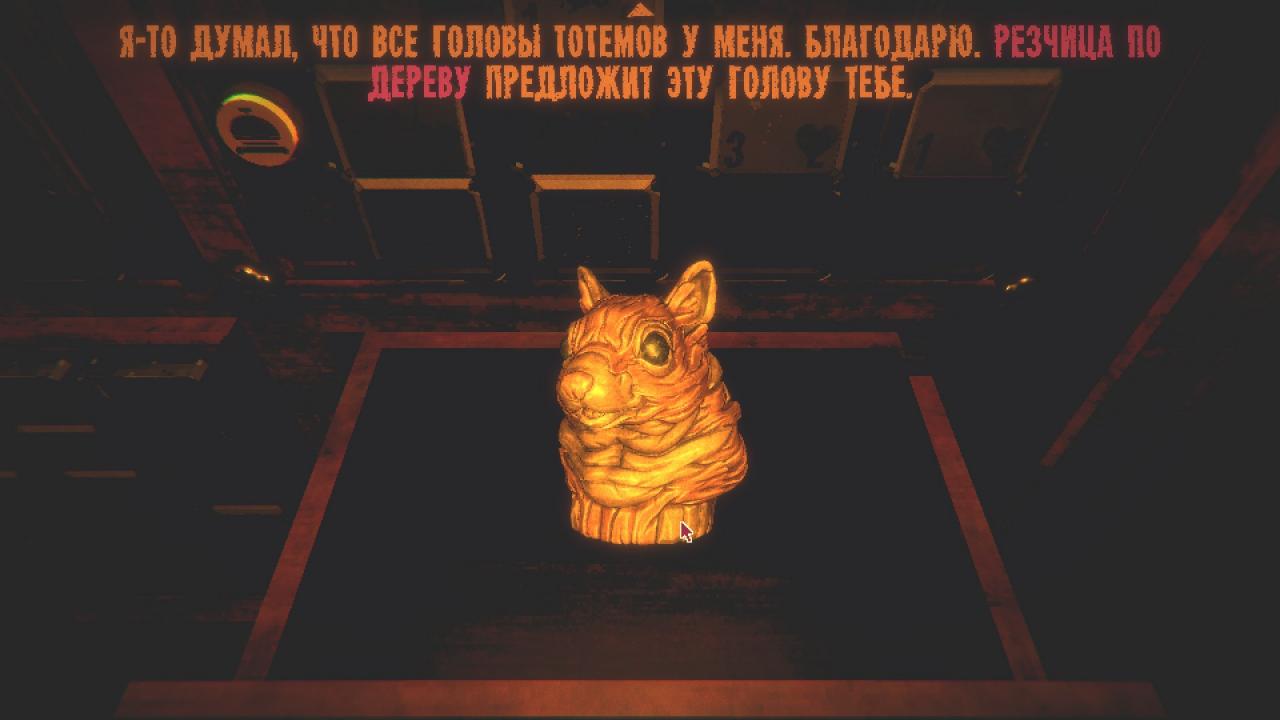 Through Amalgam. Amalgam is a rare card 3/3, which applies to all types of creatures, including proteins. 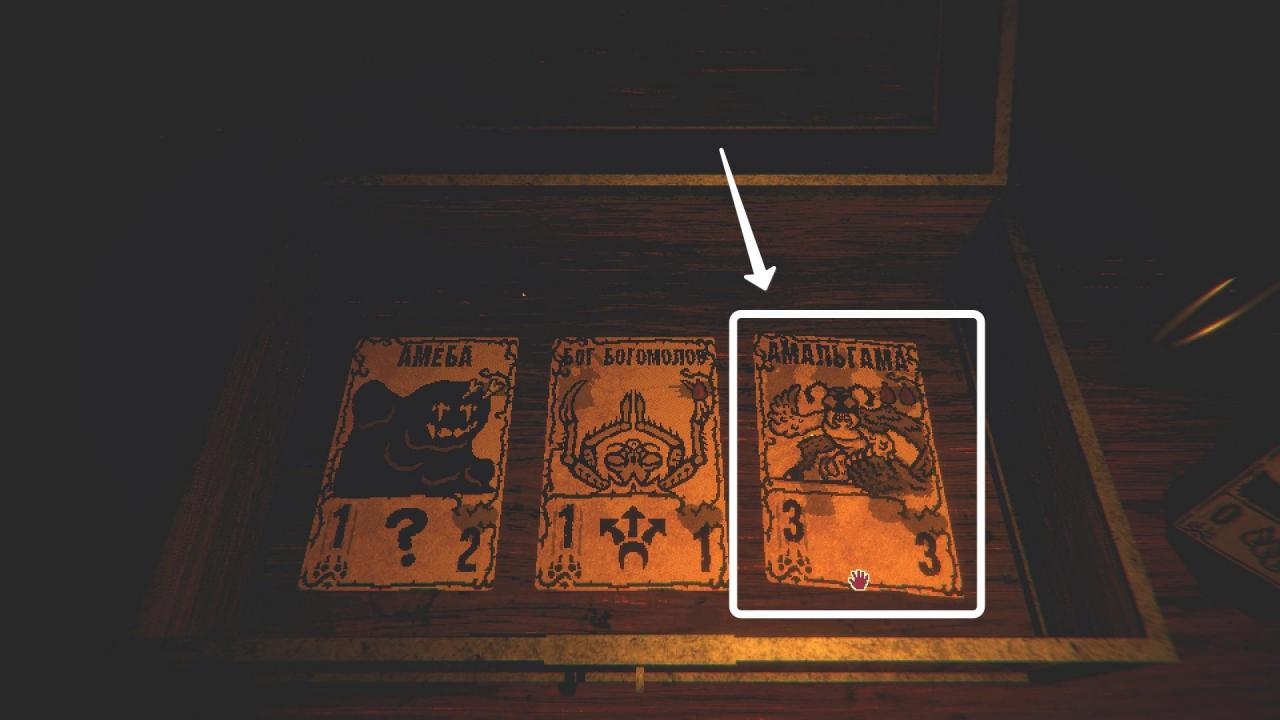 Amalgam can be obtained in three ways:

1. Exchange for gold skin at the shopkeeper.
2. Get from the chest when defeating the boss.
3. Totem Carver gives it, when do you collect 7 parts of totems.

I think, that this is the easiest way to inflict squirrel damage.

Concentrate on this achievement only. Try to collect the symbols of the totem sharpener on the map as much as possible. This will increase your chances of getting a squirrel totem and getting amalgam for busting parts.. Although from experience it is easier to knock it out of the chests of bosses. 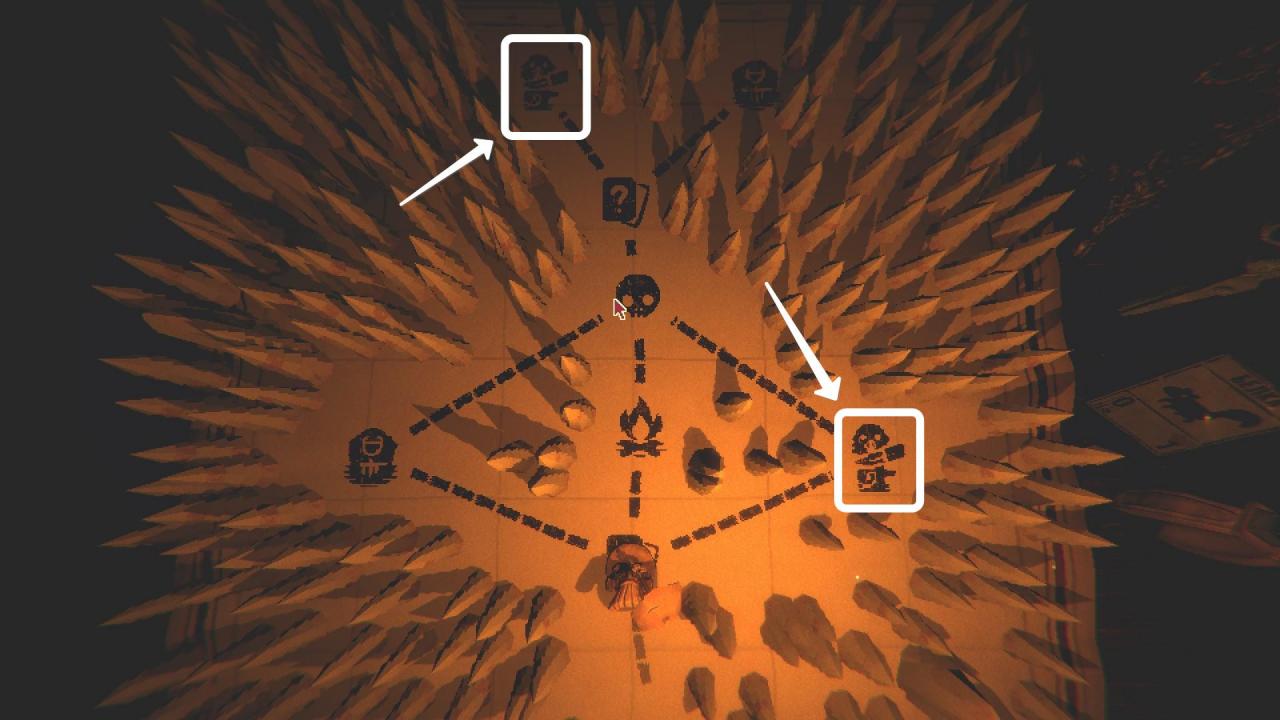 If Alpha gets caught, take it to the deck too, a little, procrastinate. Especially well it will combine with the reborn squirrels totem. Then it's just a pile of bones.

How to get the Scary Replay reward

Allow the Mycologists to experiment on the creature., which has already undergone experiments.

Mycologists are strange scientists, which glue your duplicate cards into one card, you can find them by mushroom symbol. By the way, the mushroom next to some cards when choosing cards means, that you already have such a card in your deck. 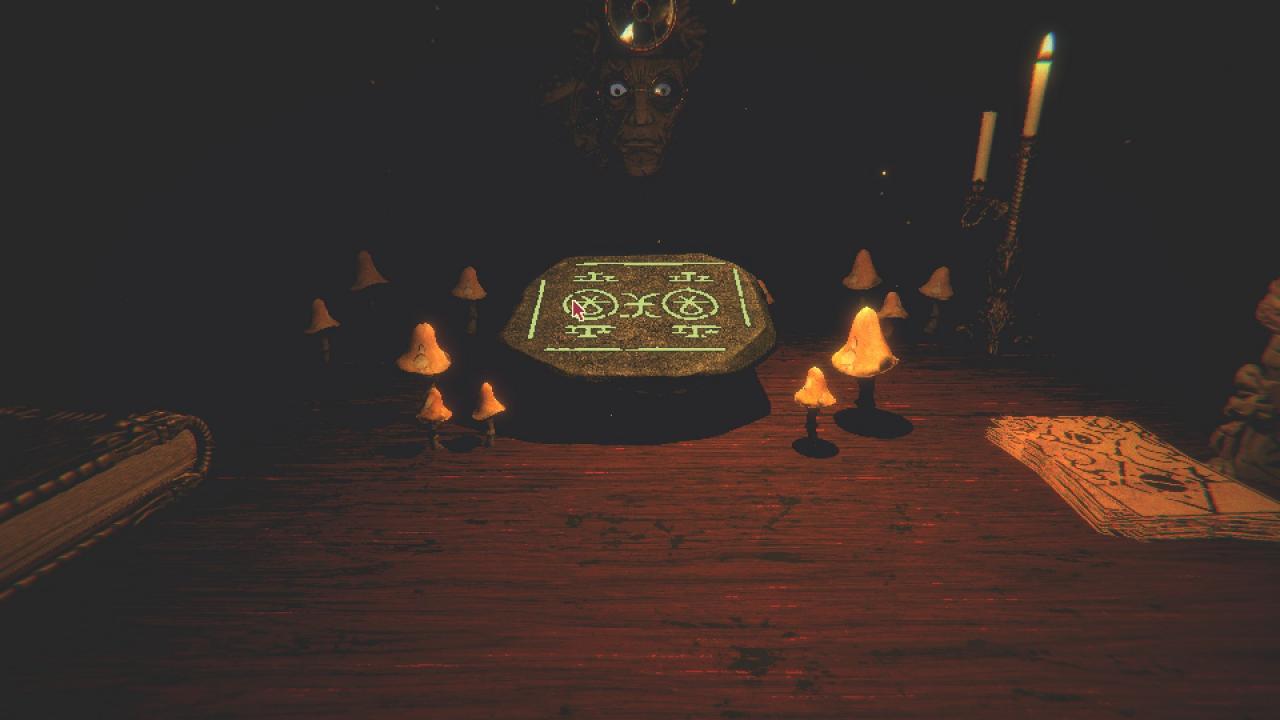 It's not the same for everybody, but for me the most difficult thing was to save 3 the duplicate. Lacked either 3 repetitions, or mushrooms on the map. But I found an easy way to do it.

The card became my lifesaver in obtaining this award. Pack rat. It is very easy to collect three copies of this card., if you do not use the items on the right.

1. We save any three items on the right.
2. We step on the symbol of the backpack.
3. Goblin says “HM, you cannot carry more than three items, then take a card from my friend”. And this card is always a pack rat: 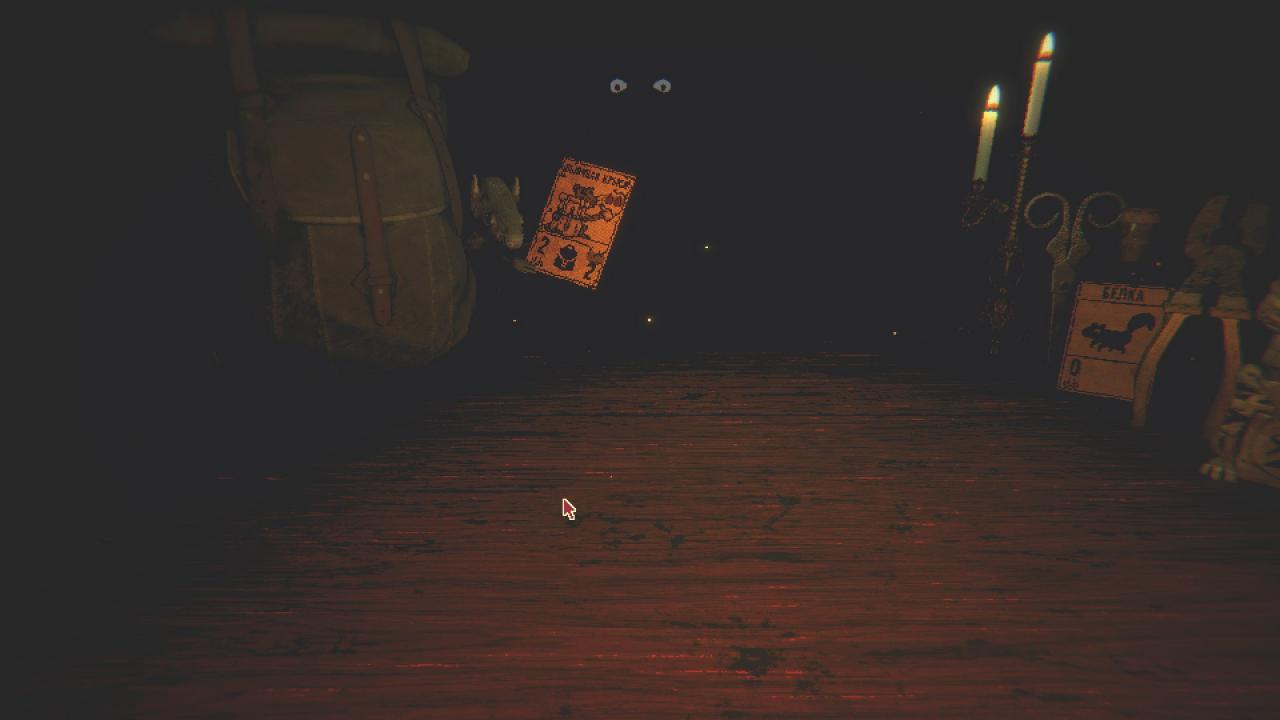 In addition, the Pack Rat can be exchanged for skins and obtained from the boss's chest, but it never came in handy for me, I collected the rats cleanly on backpacks on the first map, and on the second and third it is easy to collect two mushrooms.

Just don't carry more than two duplicates of each card with you.. Otherwise, mycologists may get the wrong duplicate..

How to get your Role Swap reward

Steal a creature from the angler, which was stolen by him earlier.
This is the easiest achievement, but to get it, you need to go two circles on the map.

1. Defeating the Angler boss (second after the prospector).
2. We die and enter the next applicant.
3. Goblin gives us a fisherman's hook in our items: 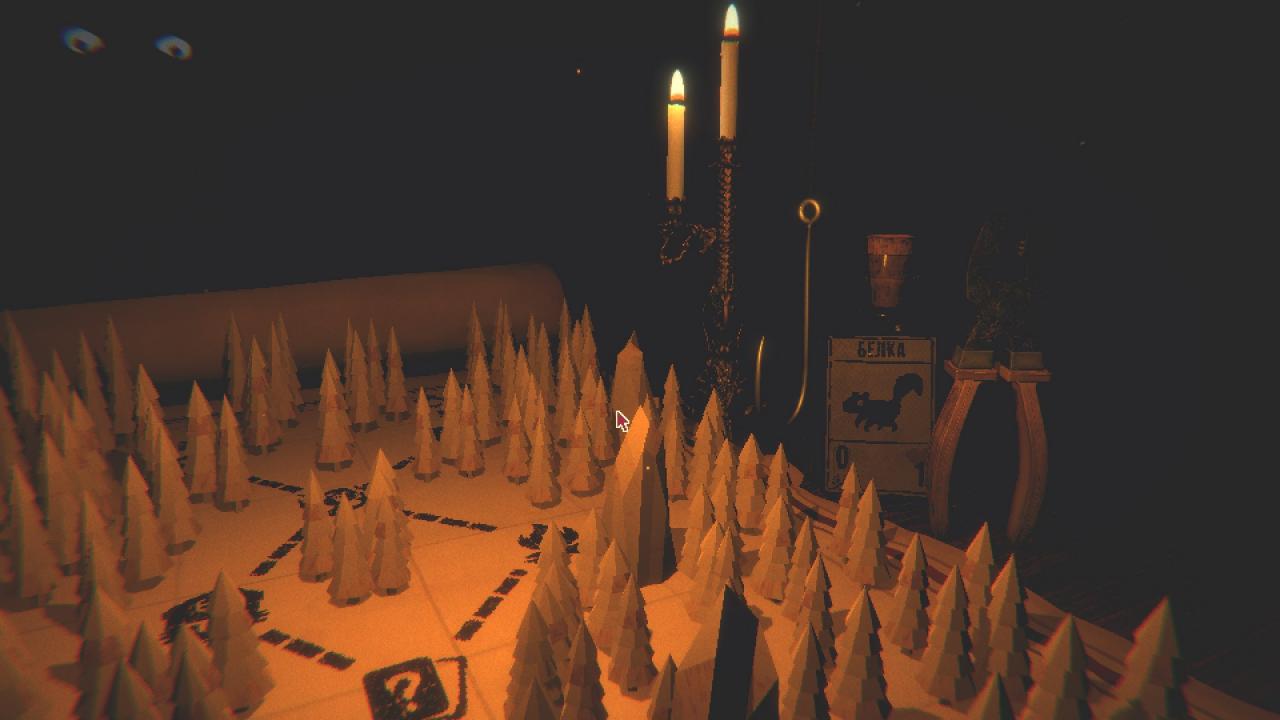 4. We reach Rybolov again, without spending a hook.
5. We are waiting, while the Fisherman steals our being for himself with his ability:

IMPORTANT HERE! Do not kill the angler with other creatures! It should still be in phase one., and he must have time to steal the creature (drag it over to yourself).

6. We take the hook and drag the same creature back to ourselves.
7. Done.

How to get the Devil's Fun achievement

Apply over 666 damage in original Inscryption.

Perhaps, this is the hardest achievement in the game. How to apply 666 damage, if your opponent dies after 5 damage? My galaxy tactics: Ouroboros (it will come in handy in the next act too).

The most convenient way to get this award is from a manikin., which is in the tower of Magnificus. It does no damage and you will have an infinite number of attempts., if you are wrong. 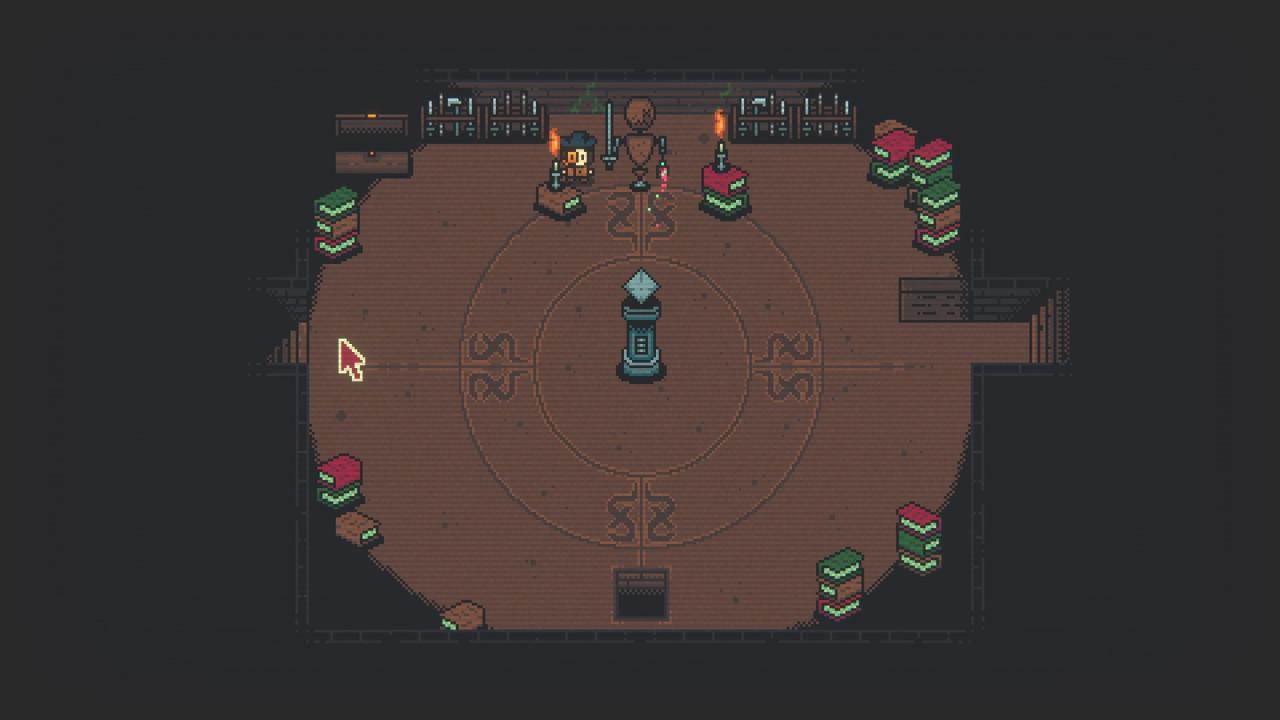 Ouroboros is the strongest card in the game, it initially has stats 1/1 and rebirth. However, returning to hand, it is not just copied, and gets +1/+1 to stats. This effect is permanent.

For the imba-comba, you need these cards.:

1. Ouroboros. We buy it from a shopkeeper in a devil's hut.
2. Pharaoh's clique, a card that can be sacrificed endlessly, and she gives 3 blood. Mined from bone sets.
3. Map of the Necromancer, which resurrects the creature, to then kill him again. Mined from bone sets.
4. Any Gem Cards or Energy Cards, which can be gutted on the bone. We need them 9.

I shot a detailed guide for you in this video. Better to see once, than hear a hundred times.

Ouroboros will help us get all the other achievements of the second and third acts!

How to get the Dark Offering achievement

Present an offering to the Lord of Bones

Achievement itself is not difficult, just not clear, how exactly to get it.

For, to get this achievement you need to roll two halves of the Old Obol from Grimora's sets, then put them on the field at the same time, get a whole Obol. Then go to the crypt of Grimora, go down to the basement for one of the skeletons and click on the coffin, who stands there.

For those, who didn’t figure it out, I also prepared a video:

Remember to go downstairs and receive your rewards from the Bone Lord! To do this, you need to approach him twice..

Including the Lord of Bones gives a card, which is needed for achievement “Joint onslaught”

How to get the Joint Onslaught achievement

Collect all cards in the original Inscryption

Some cards are missing in packs, they need to be obtained separately. You may not have enough foil cards to, to close this achievement.

Total in the original Inscryption 96 kart. Most of which can be found in card sets or bought in stores. but 4 cards from this heap will not work. Fortunately about, how to get them, already told Csandro see section Chapter 2 Special Cards

As for the lack of foil cards, it is easily solved by the endless ouroboros, which I talk about in this manual in the section How to get achievement Devil's Fun after that, how do you apply 666 damage per battle, you will have no shortage of foil cards.

prompt:
If you don't know, what cards are you missing, go to the merchant at Magnificus, there is a book next to him, which contains all your cards at the moment. 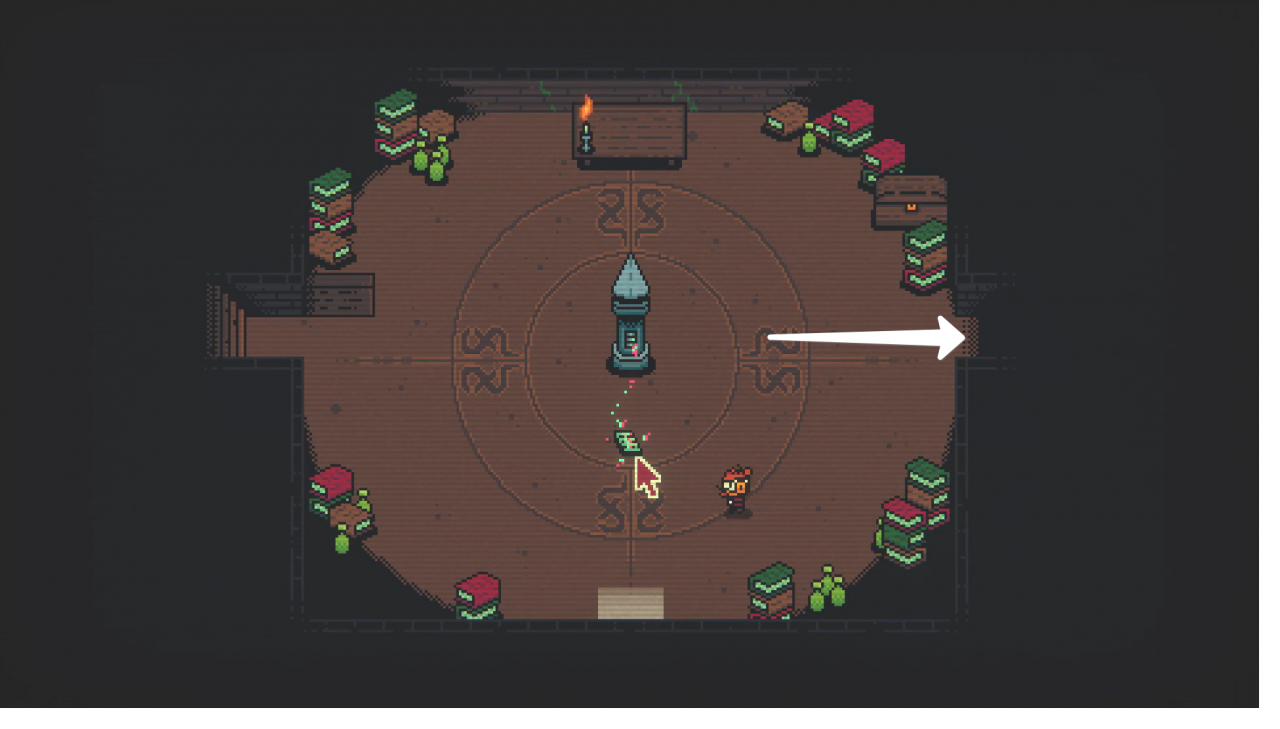 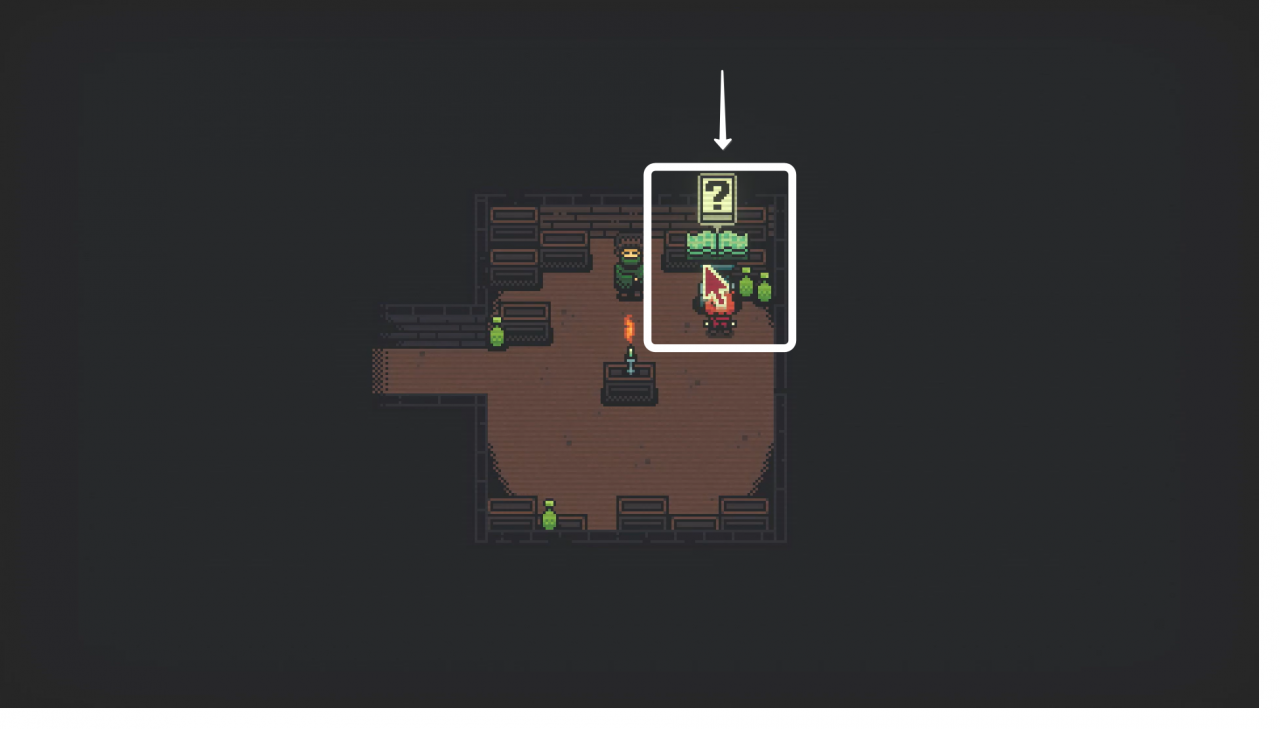 How to get achievement Forgotten Science

Get all 5 cards at the Shopkeeper at the factory P03

To receive cards from the Shopkeeper, you need to collect 5 skins, they are kept secret, like the shopkeeper herself, so it's easy to miss them.

1. Where to get the Shopkeeper?
To unlock the shopkeeper we need to reach the portal Dazzling Bastion (next to the boss of Opanki) and go from this screen:

Then click on the lock in the room. A real door on the map will open for you, she is on your left, when you get off the table. There you will find a holographic shopkeeper.. 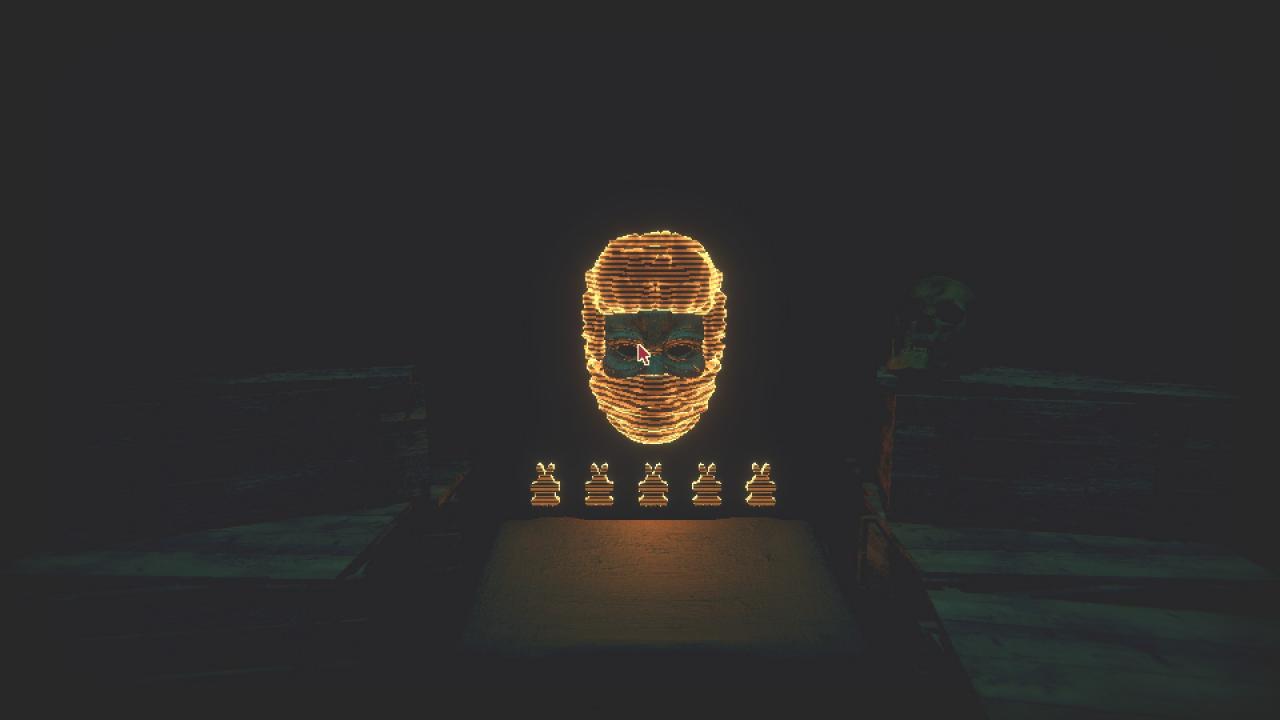 She will ask you to bring 5 skins, and that's where they are:

We come to the store. There you can buy a skin for 22 robobaksa. 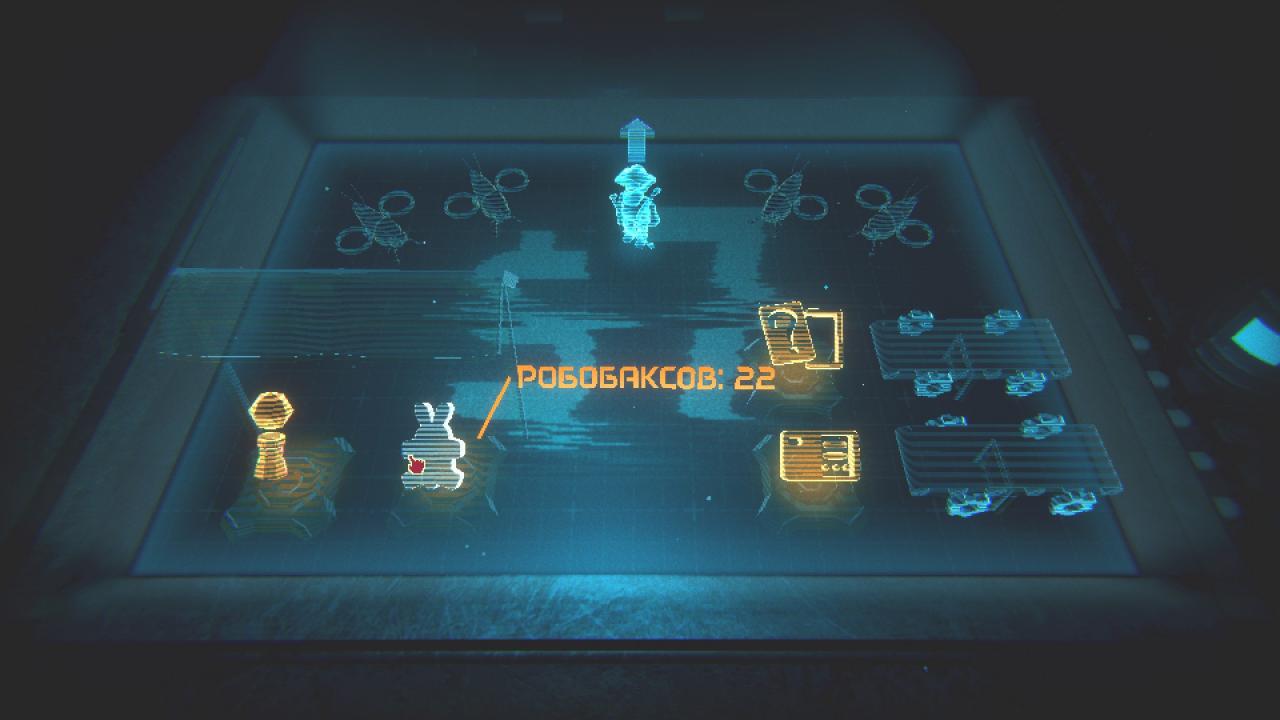 To turn one last time, hover over the center of the right wall. After which we need to click on the trap, when the bunny hits it, to get the skin. 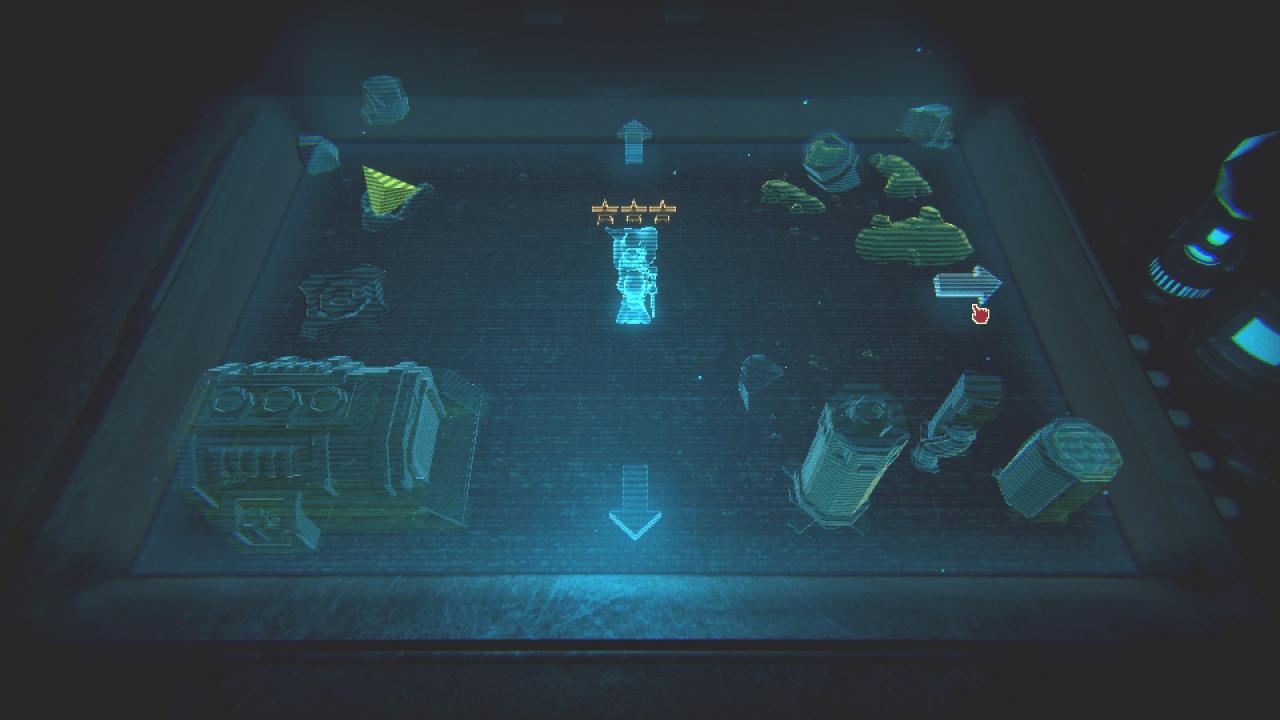 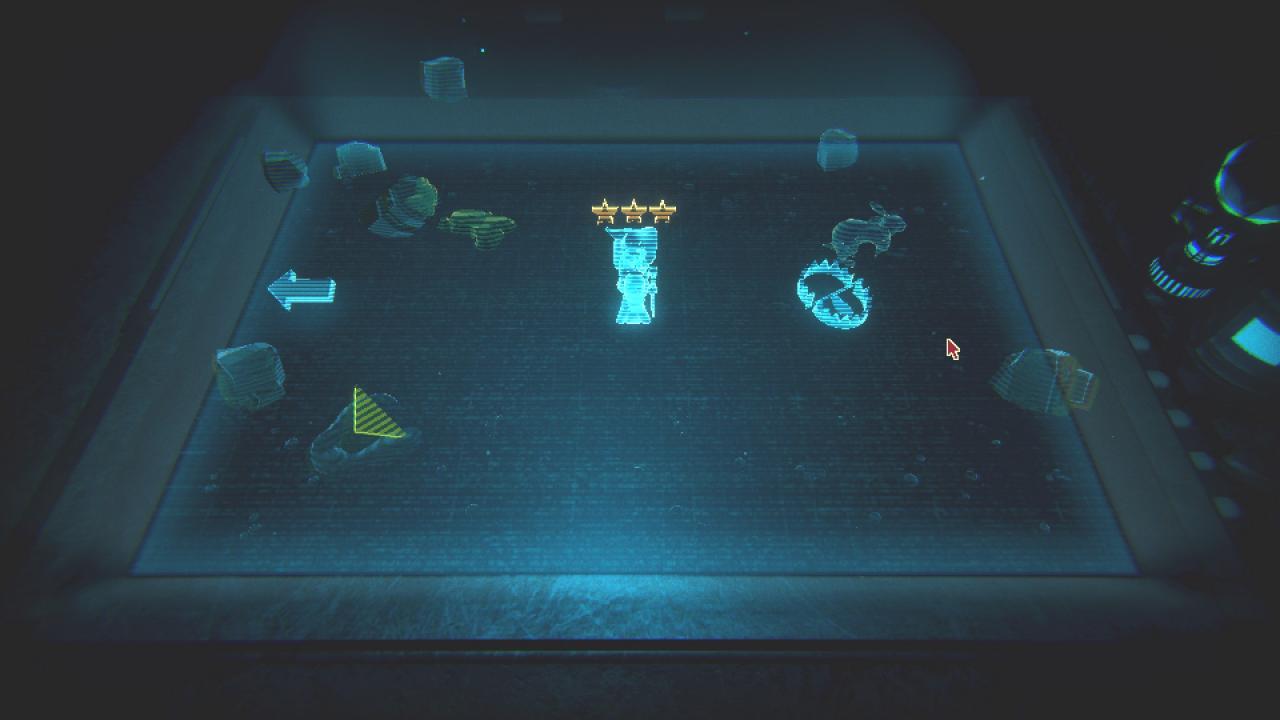 5. From the portal The world of fetid corpses let's go

Then we get up from the table and go to the left door. For each skin, the Shopkeeper will give us a map. After receiving all five cards, we will receive an achievement.

How to get the Achievement Spooky Loot

Thugs are ginger mercenaries, who start to hunt you, as soon as you have a winning streak. The reward for your head is growing, starting from one star, ending with three. You need to fill 3 stars, wait for the next thug in the game and kill him. However, the stats of these cards are simply fierce.. 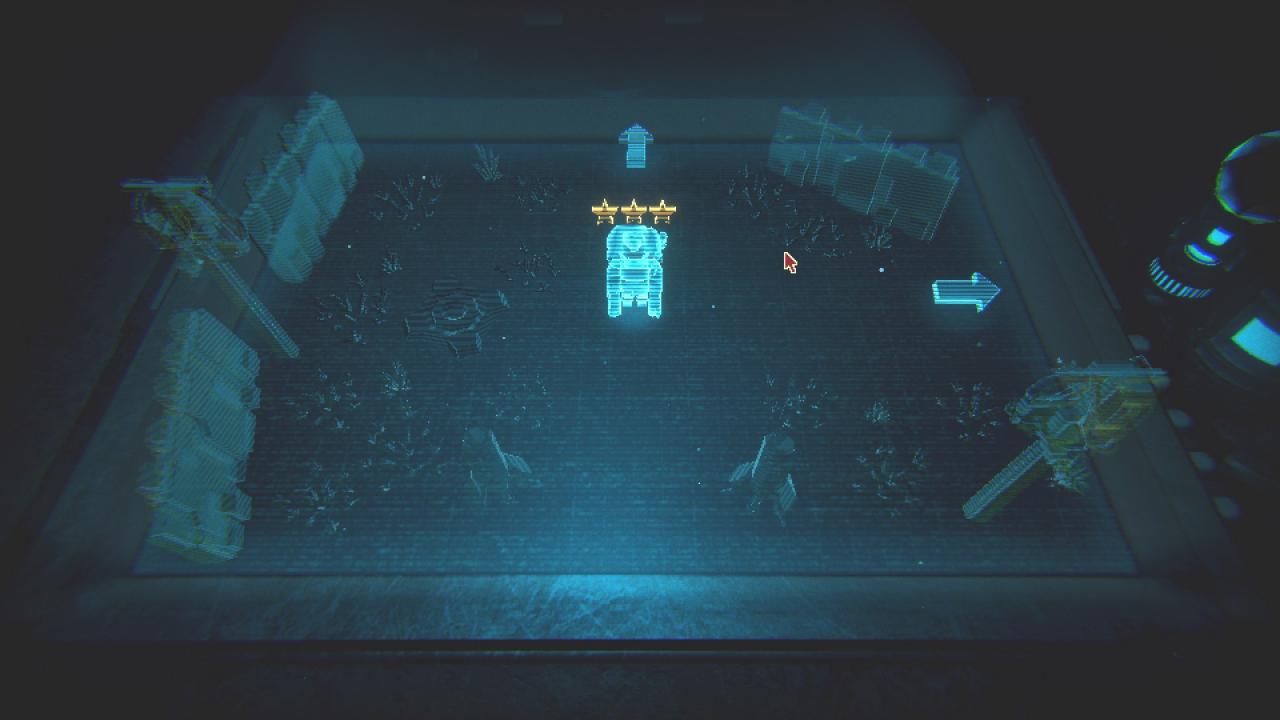 1. We need our Infinite Ouroboros, which we received in the Devil's Fun achievement. It will greatly simplify the task..

You can get it in the third act cuckoo clock., if you put time on 4:00 (I will add the screen later).

but) Finish off stars to three with one victory Ouroboros unnecessarily. stars are not actually awarded for winning streak, and for over damage, inflicted on the enemy.

b) Kill those same Thugs.

2. For insurance we collect in the deck:

In principle, with a cheating Ouroboros and a small number of cards in the deck (you can not take them on the map) this achievement is very simple.

How to get the Achievement Painful Regrets

Do not empty trash

This achievement is just mysterious. And it is important P – order, because. autosaves are extremely poorly located, and if you do it wrong, then you have to replay the whole act.

We need to kill the boss Archivist, by deleting the file, which she threatens to remove. 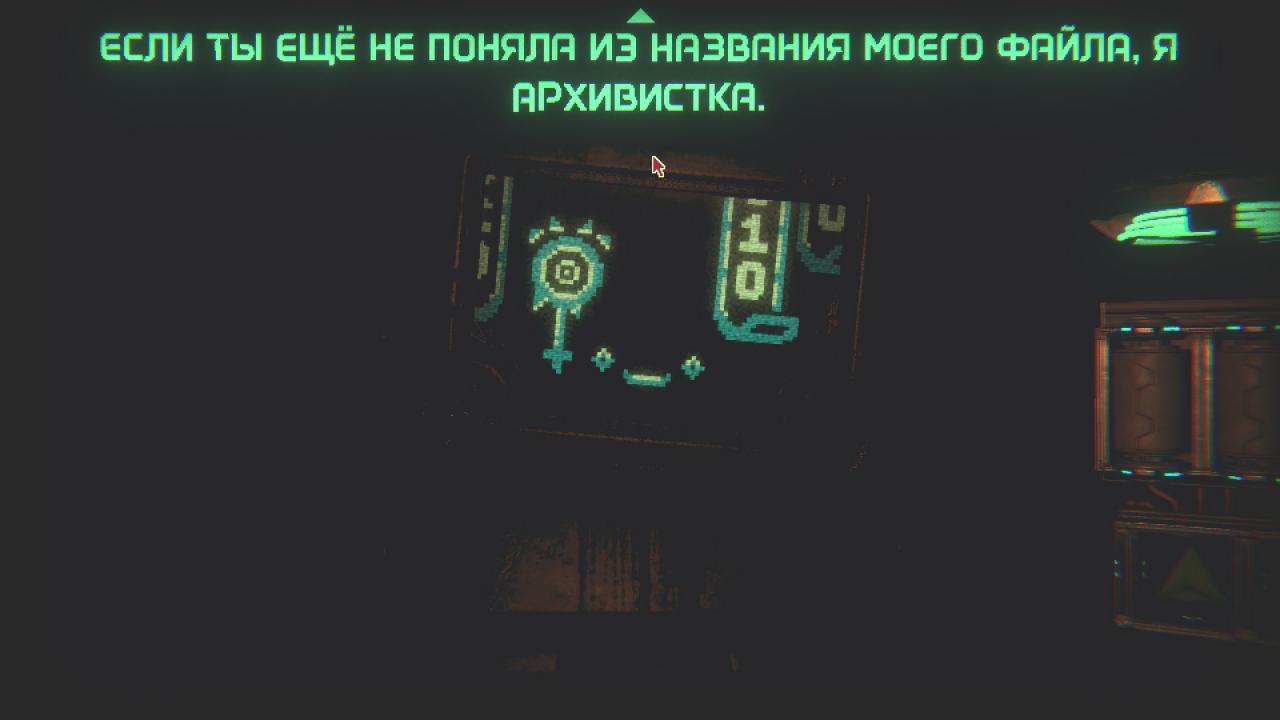 Archivist is a very funny boss, which breaks the fourth wall and interacts with our hard drive. In the second phase of the battle, she asks us to choose our favorite file. As soon as we do it, she threatens to delete the file from our computer, if he dies in the game. 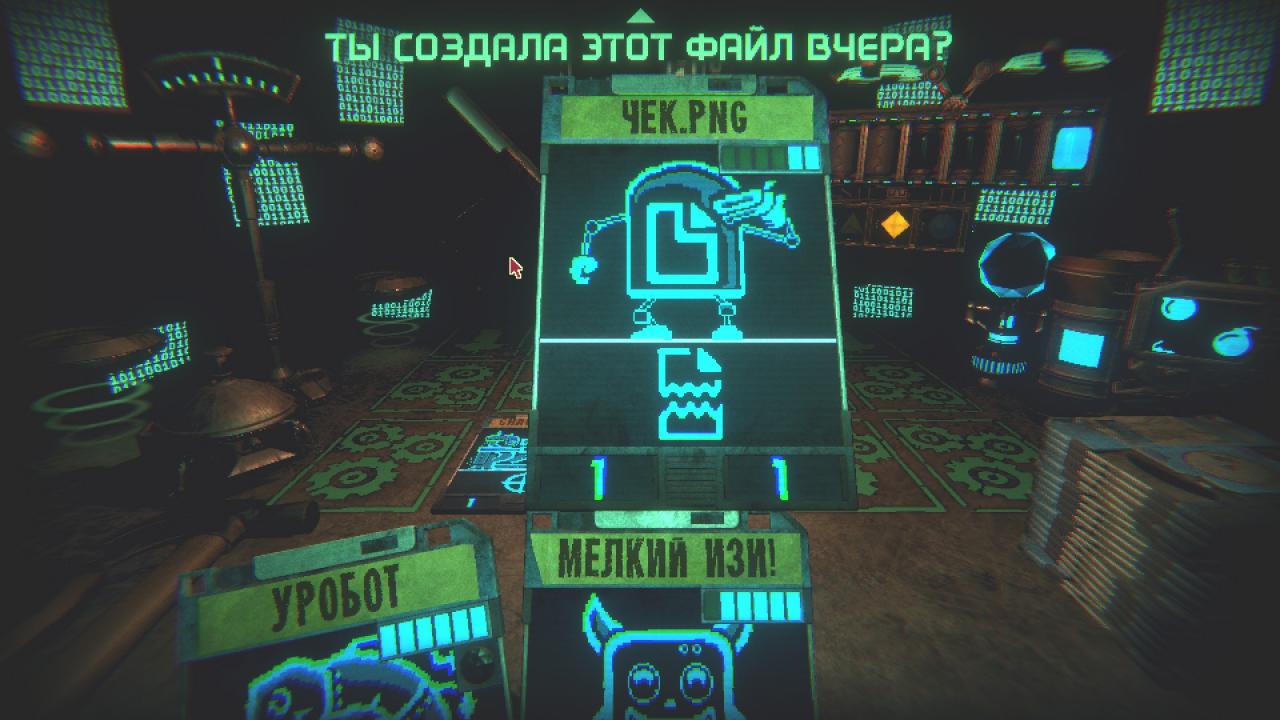 To receive a reward:

1. We get the required file (remember, where does he lie)
2. We put it on the field
3. We kill with a creature or with a hammer
4. The archivist says, that she is very sorry, but the file is deleted.
5. IMMEDIATELY after that, we minimize the game (Alt + Tab)
6. Find our file (yes-yes, he cel!)
7. We delete it ourselves (can be in the basket).
8. Defeating the boss Archivist.

Then P03 tells us: “Yes, yes, you deleted that file, you think, what will they give you a medal?” III… they still give a medal.