Idunn Apples are one of the collectibles in God of War. There are nine of them in total., and for every three of them, the player receives an increase in maximum health. Each apple is hidden in a chest, sealed runic puzzle. You will need to solve a problem, to open the chest, and it won't always be easy. Once you have collected all the apples, you will receive the Garden of Idunn trophy (Iðunn's Orchard). If you are having difficulty finding these chests or solving these runic charades, then you will find the answers you need further in this guide.

In this case, solving puzzles means searching for items with images of runes and their subsequent destruction.. The hardest part is finding these items.. They can be like next to the chest, and at quite a distance, and also almost always hidden from the direct view of the players.

Runic Chest in Wildwoods
The first apple is in a chest in the north of Wildwood (Wildwoods). All three items with runes are in the same room with a chest. One rune is located right next to it. Another lies by the torch to the left of the stairs, on which we descended here, well, the last one is in the sarcophagus on the right. 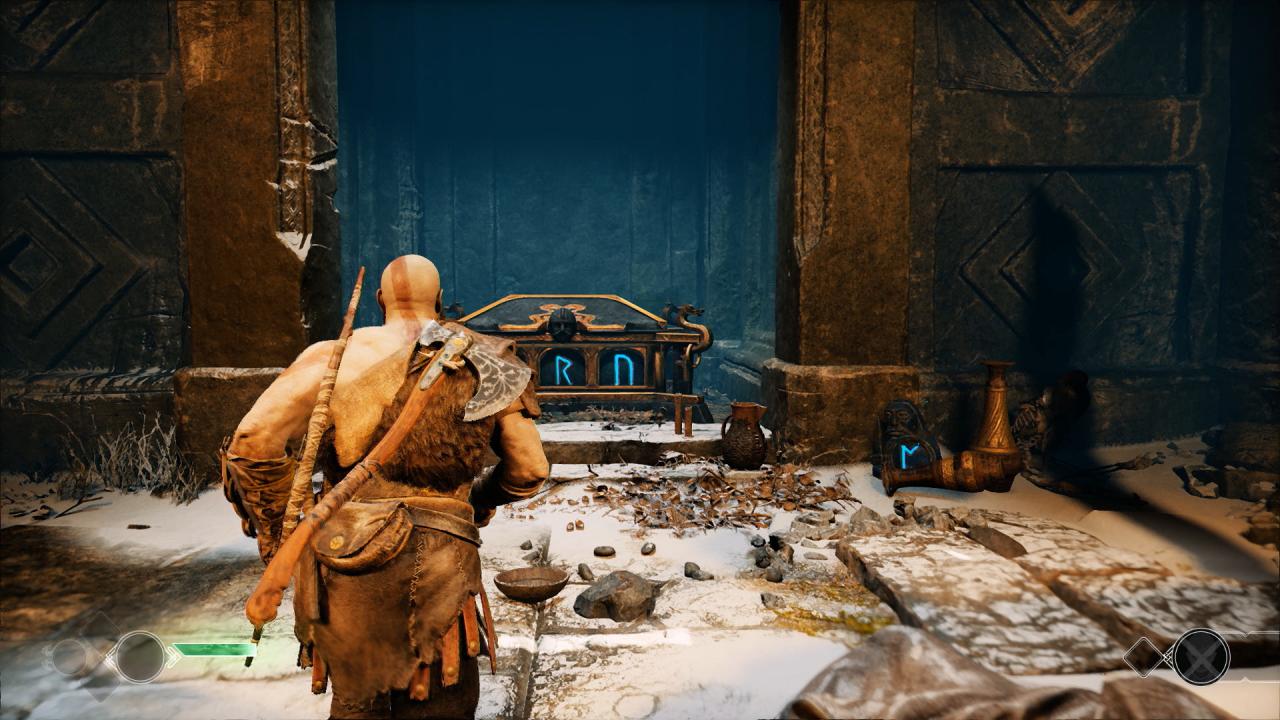 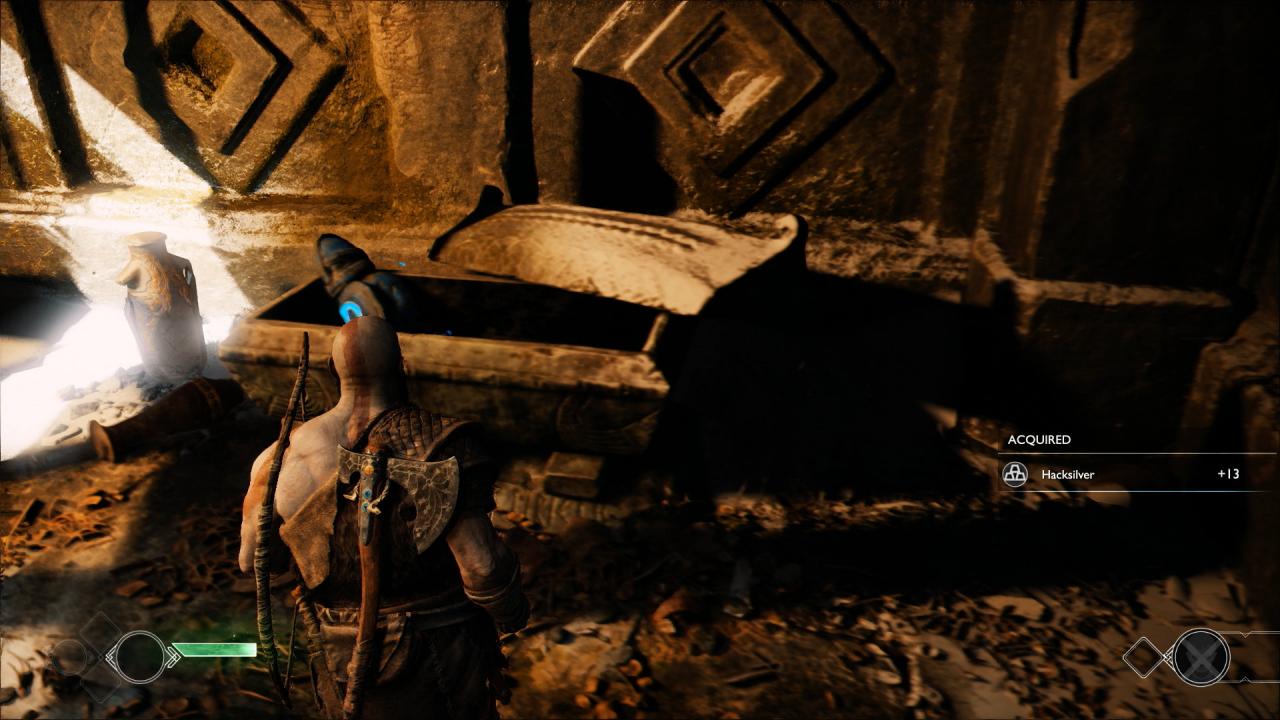 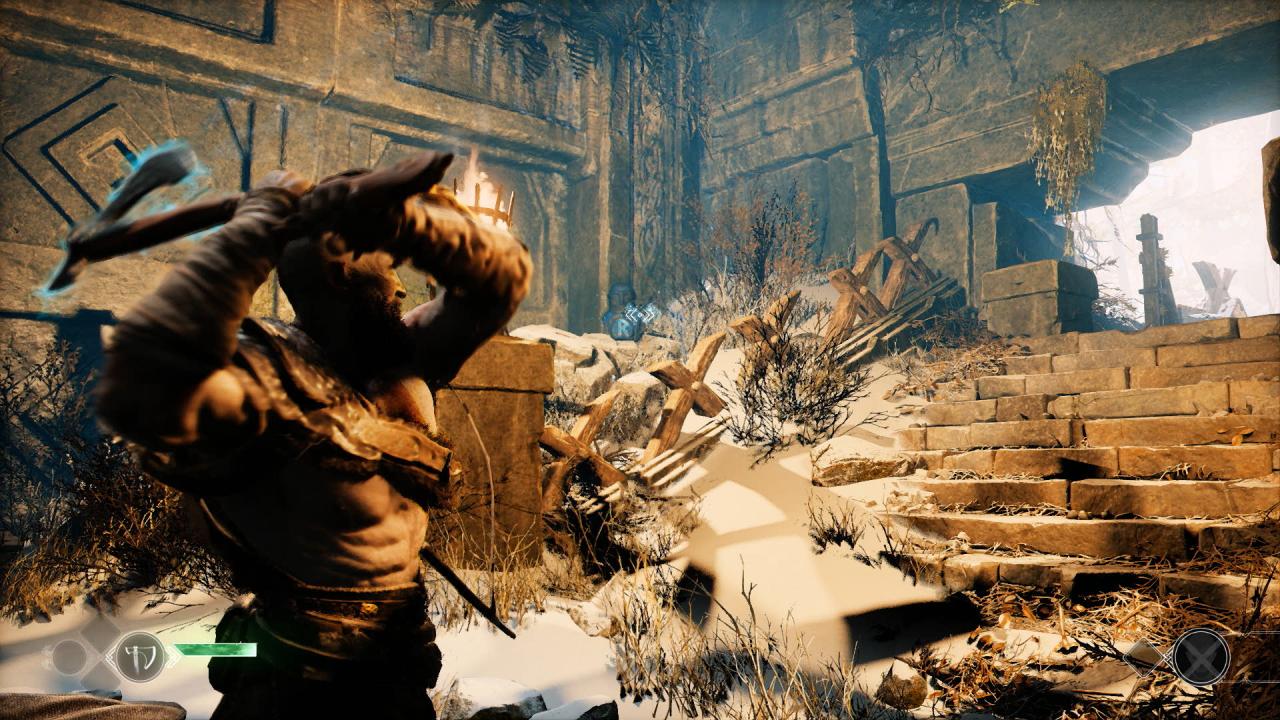 Runic Chests at the Crossing
The second chest can be found in the Crossing (River Pass). When you find him in a cave, then on the wall a little to the right of him the first rune is hidden. turn around, and you should see the second rune on the mountain to the left of the bridge. To find the last piece of the puzzle, you need to cross the wooden bridge. Once you reach the platform, with which you will need to shoot at the chains to lower the bridge, you should be able to see the third rune in the distance. Turn left after the bridge, here you will find a hole, in which this rune will be. 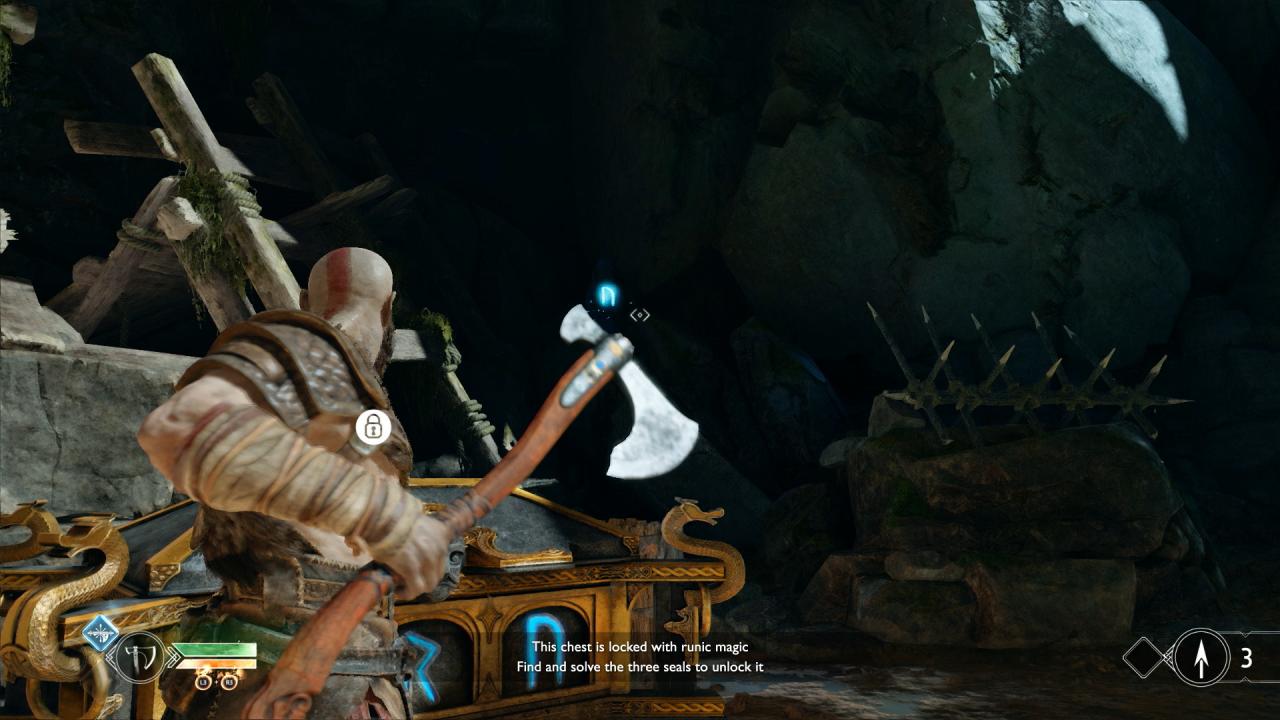 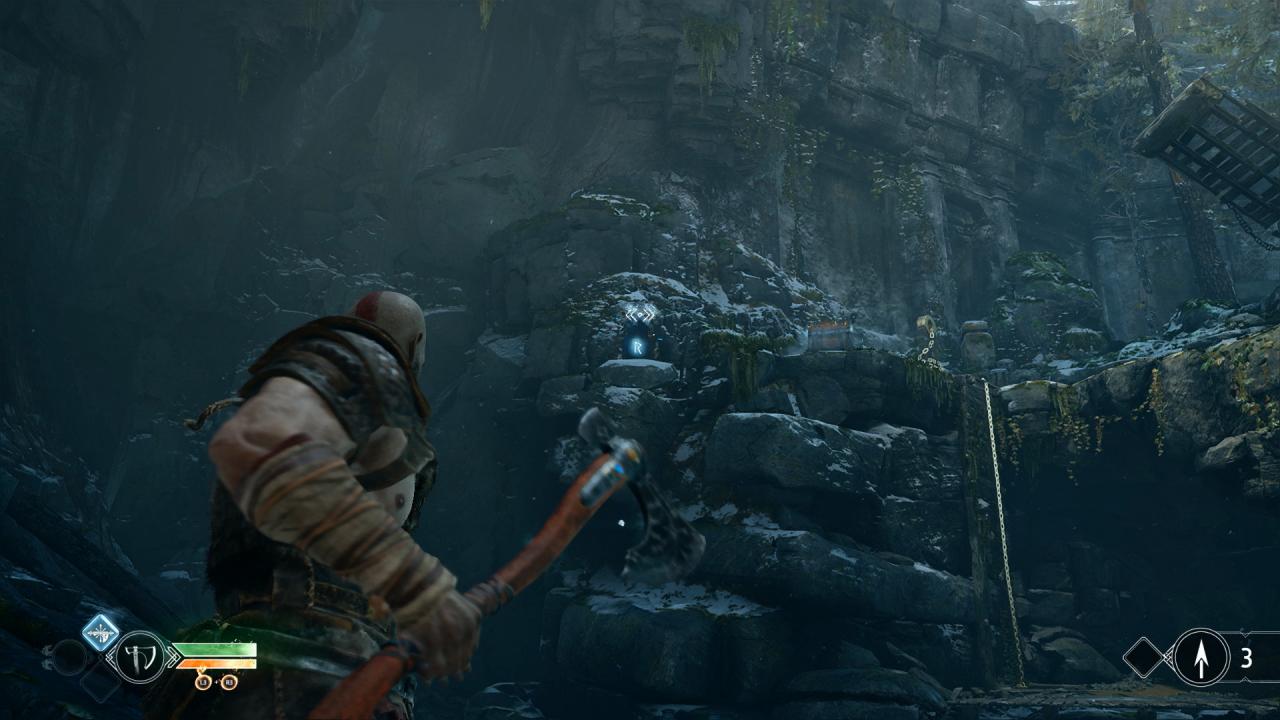 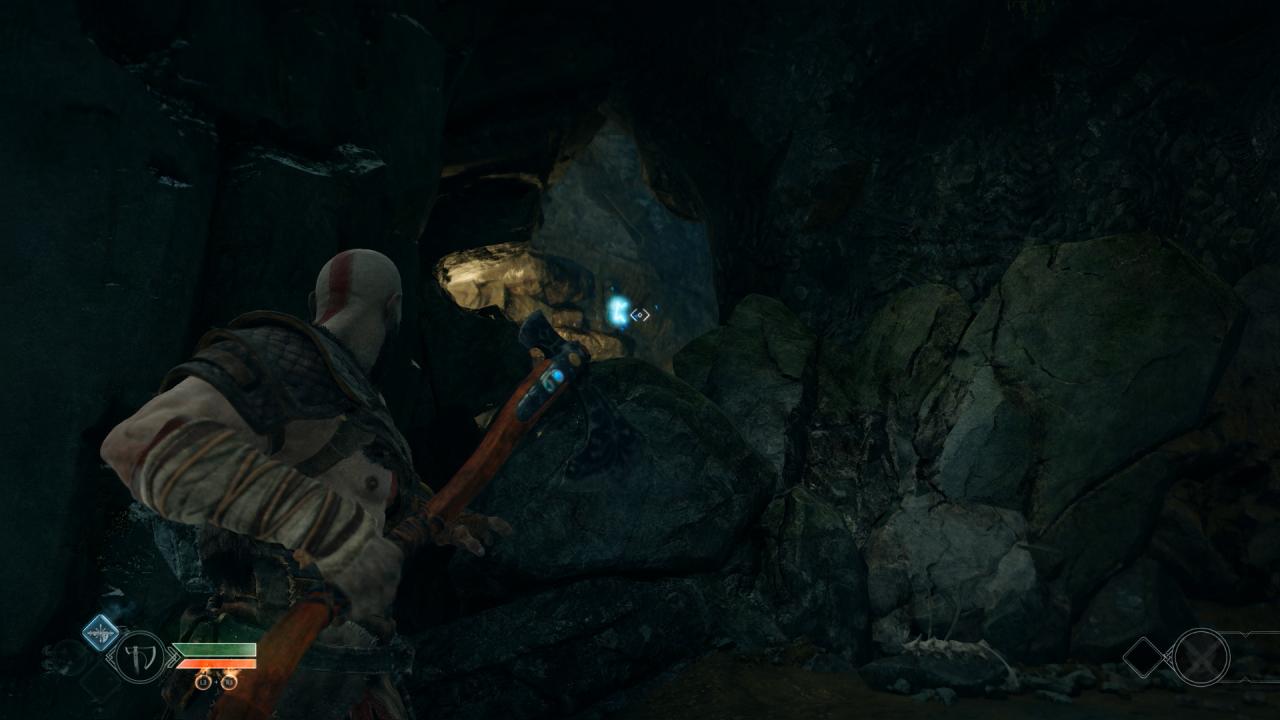 In the same area in the east of the Crossing you will find a third chest. It is located behind giant ribs, where you fight Brenna Deidy, yellow troll. The first rune is on the mountain behind the chest. The second is at the very top of the cliff., located on the other side of the waterfall. Turning to giant ribs, you should see a third rune on a high mountain in the distance. You should quickly hit them all, until they have time to deactivate. 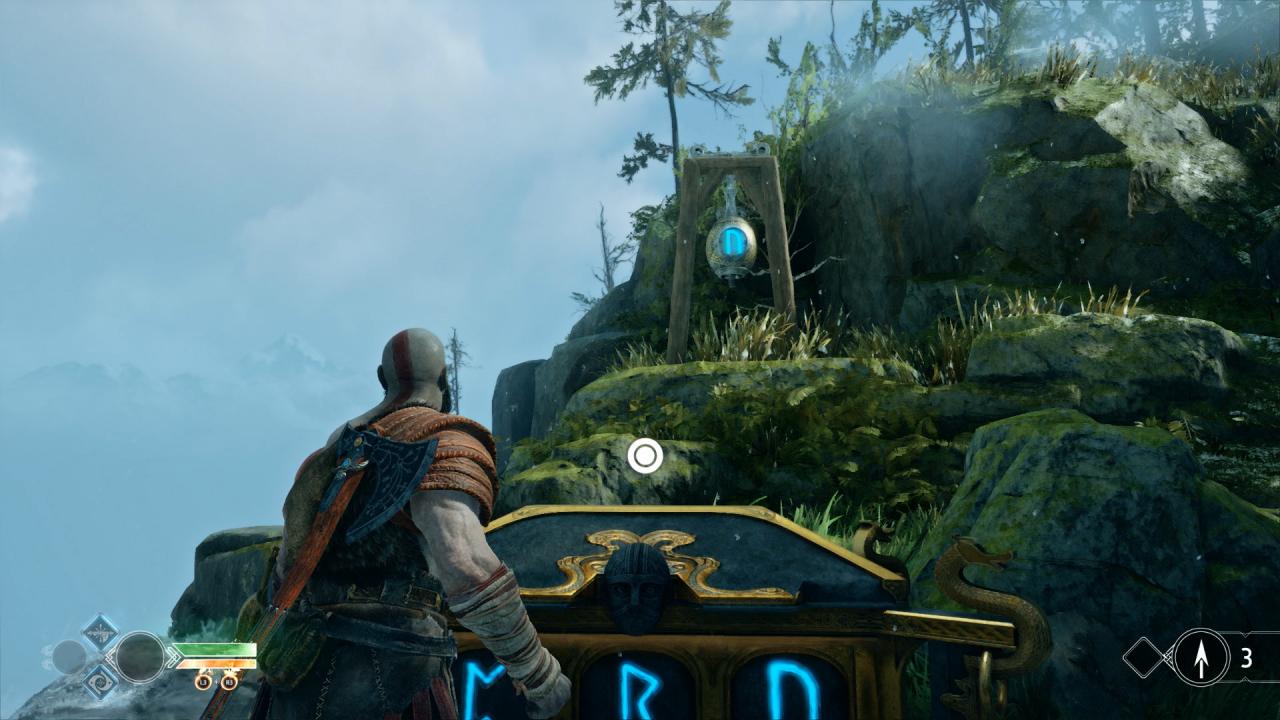 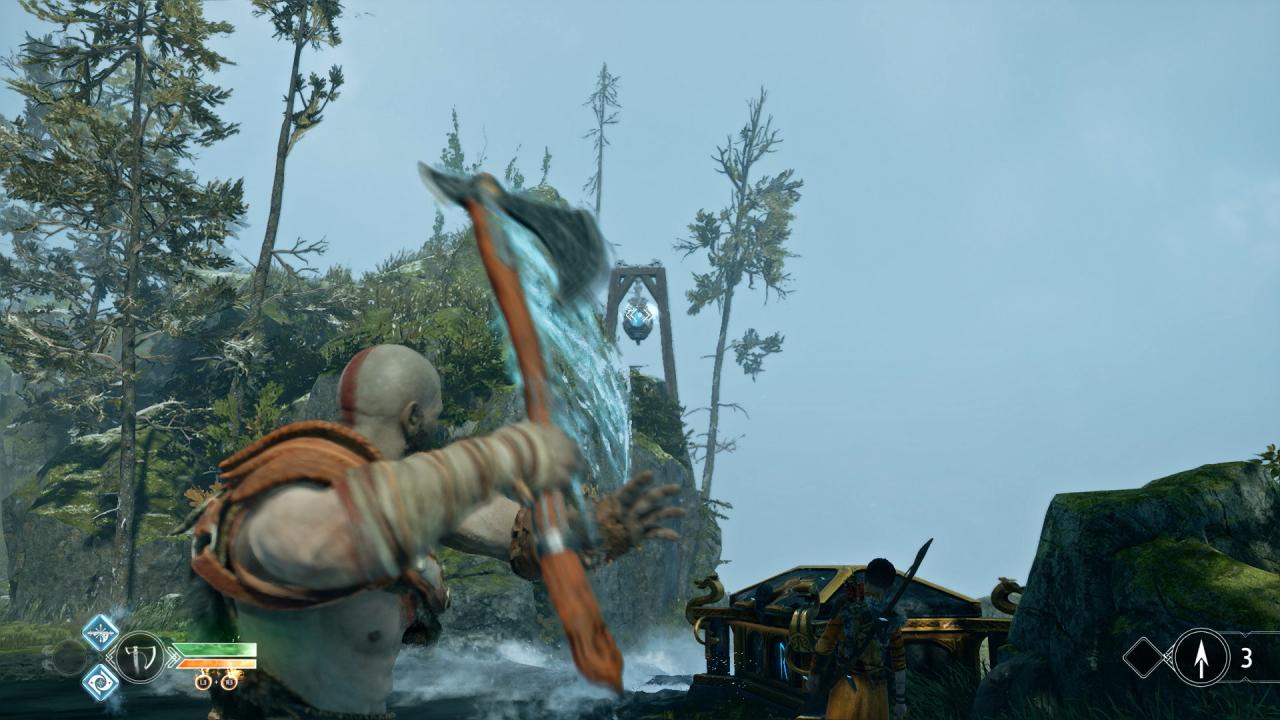 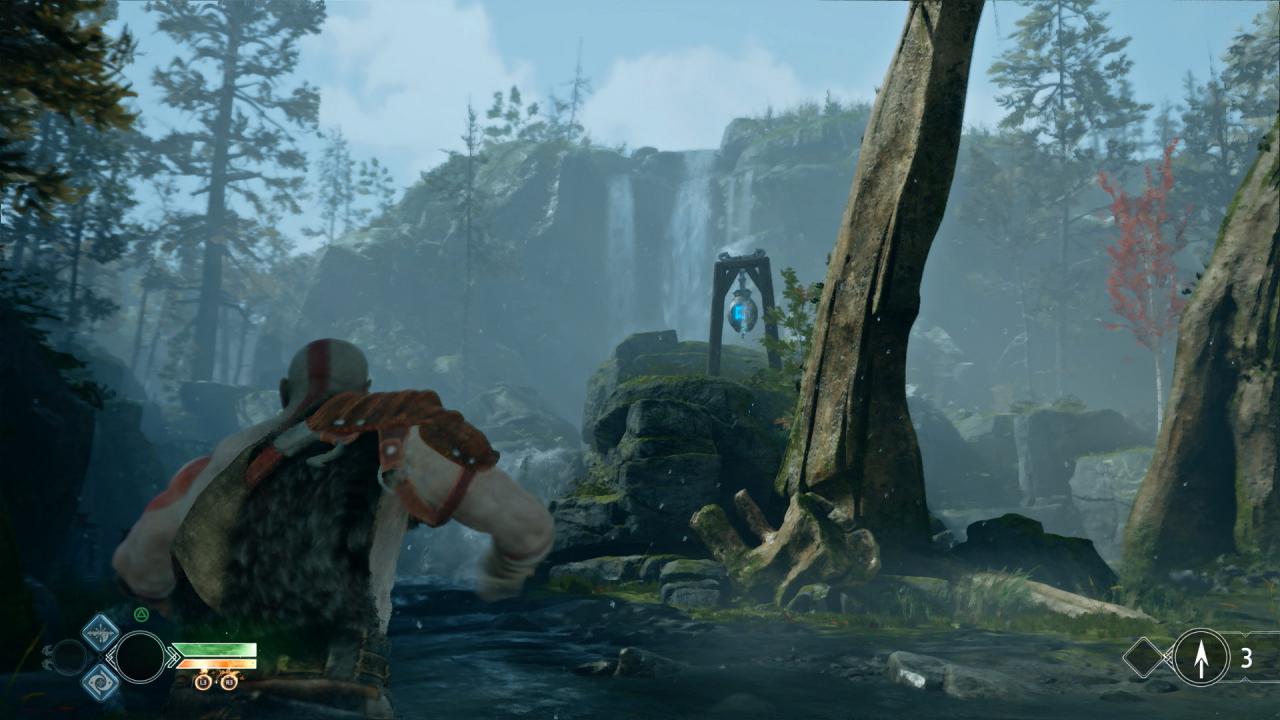 Runic Chests at the Lake of the Nine
The fourth chest is behind the boats in the dock at the Lookout Tower (Lookout Tower). This is the first dock, in which you can land after the fight with Jörmungandr (jormungandr) in the location Lake of nine (Lake of The Nine). All three runes are placed above spiked traps - two hang on the left and right sides above the chest, and the third - over the waterfall. The main feature here is to shoot the lever above the chest. Due to this action, the spikes will lower, and you will be able to shoot runes. However, the spikes immediately begin to rise back up., so you have to do it pretty fast. 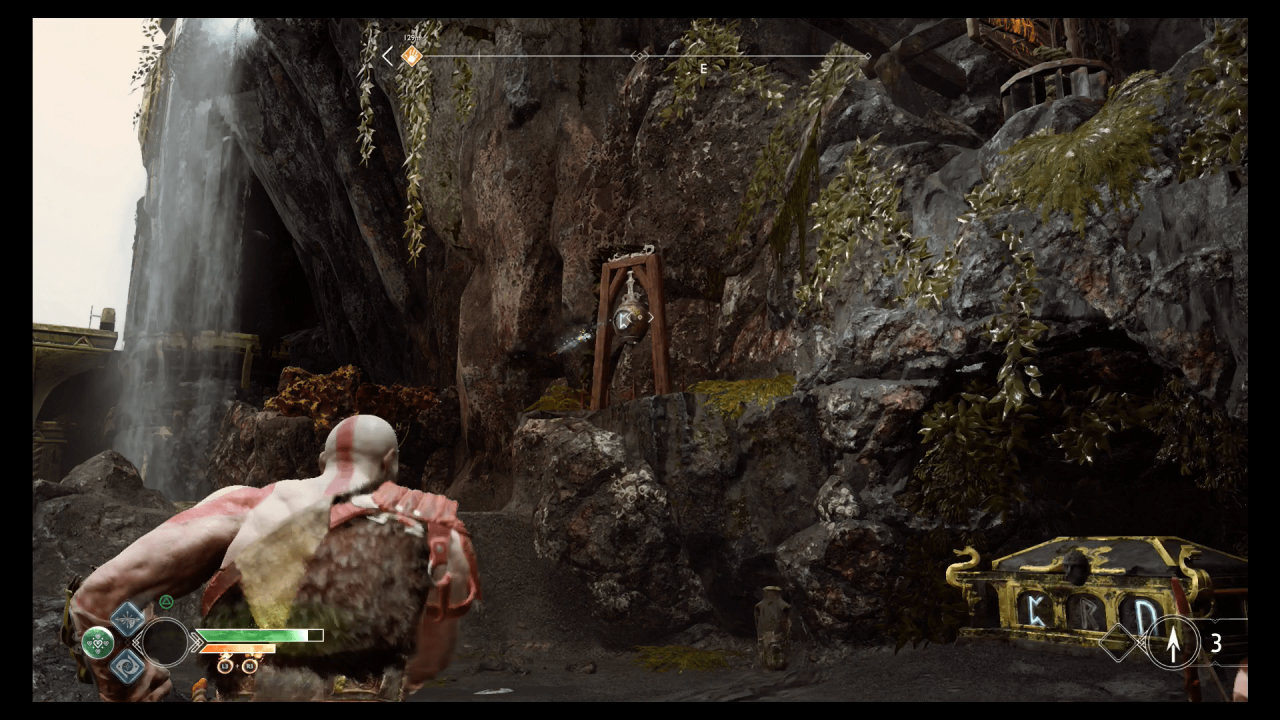 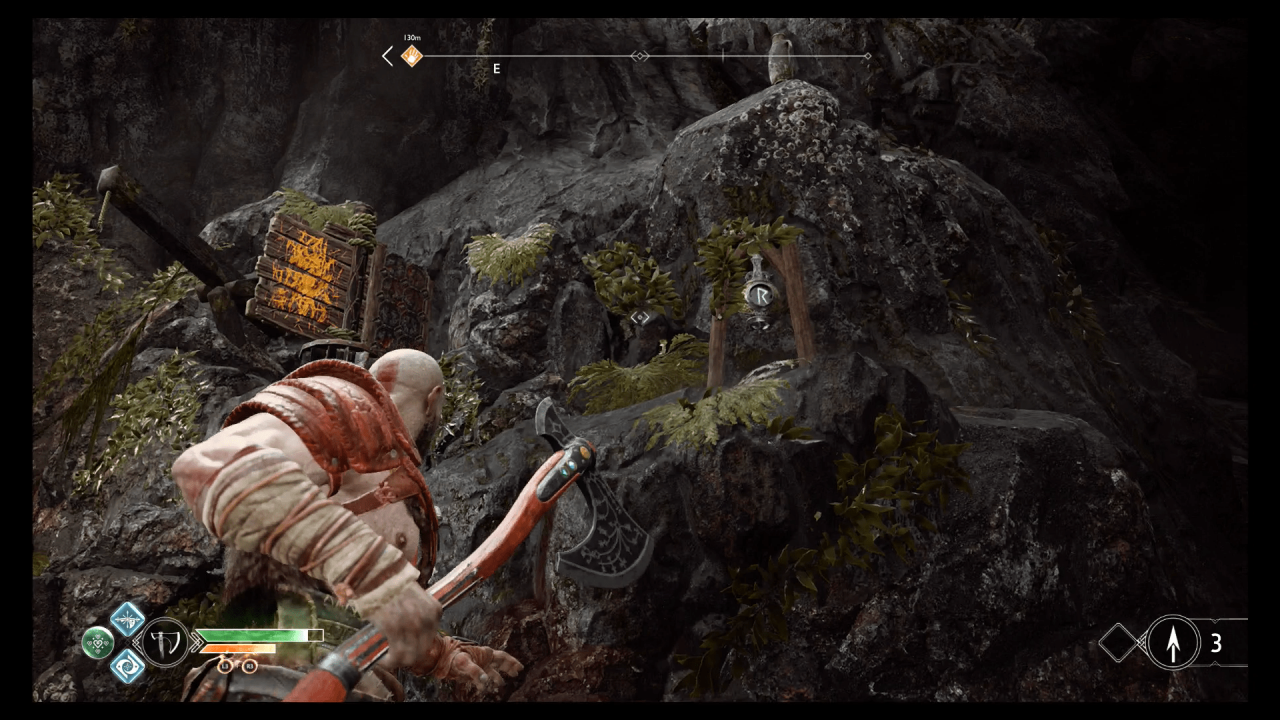 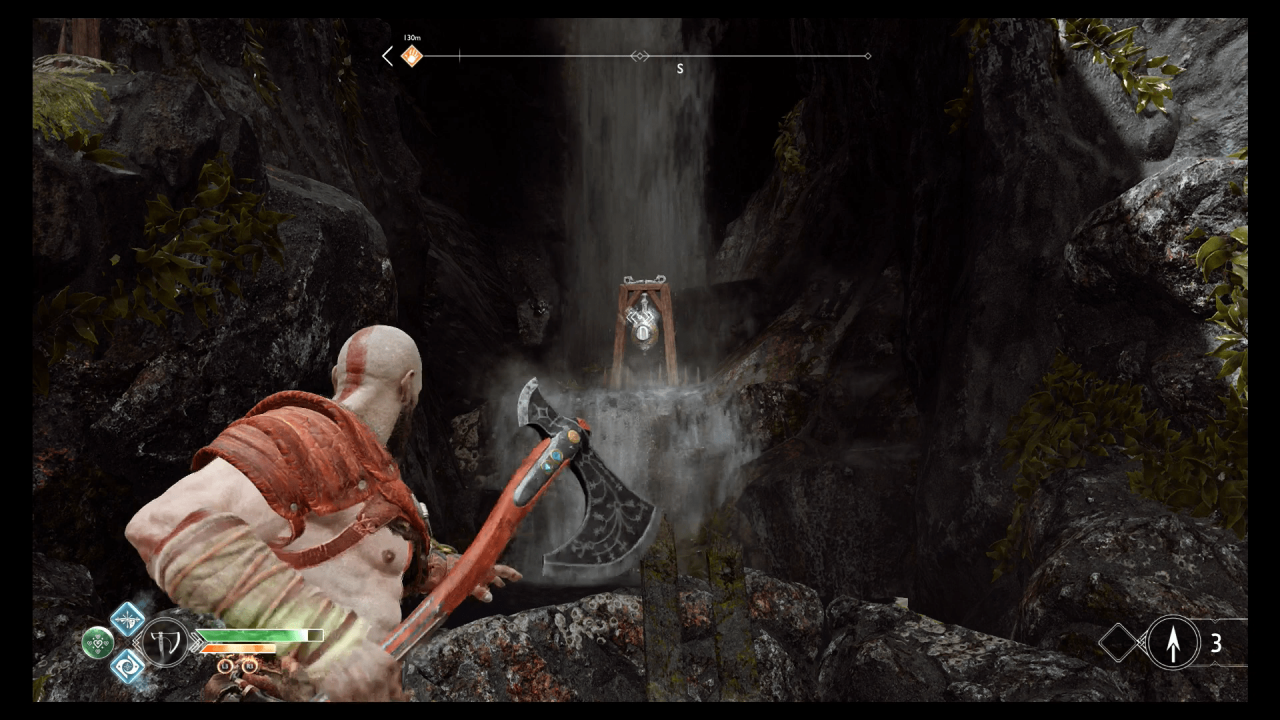 The next chest is hidden in Forgotten Caverns (Forgotten Caverns), a small area in the northeast of the Lakes of the Nine, behind one of the snake fragments. You can get here through the port, and here you will find a real test of dexterity. All runes are hung on one pole, but as soon as you hit one of them, this column starts to rotate. The point here is, to change the direction of the shot. Ie. if the column rotates clockwise, then you should aim at the target on the right side of it, otherwise, to the left. Aiming this way will be much easier. 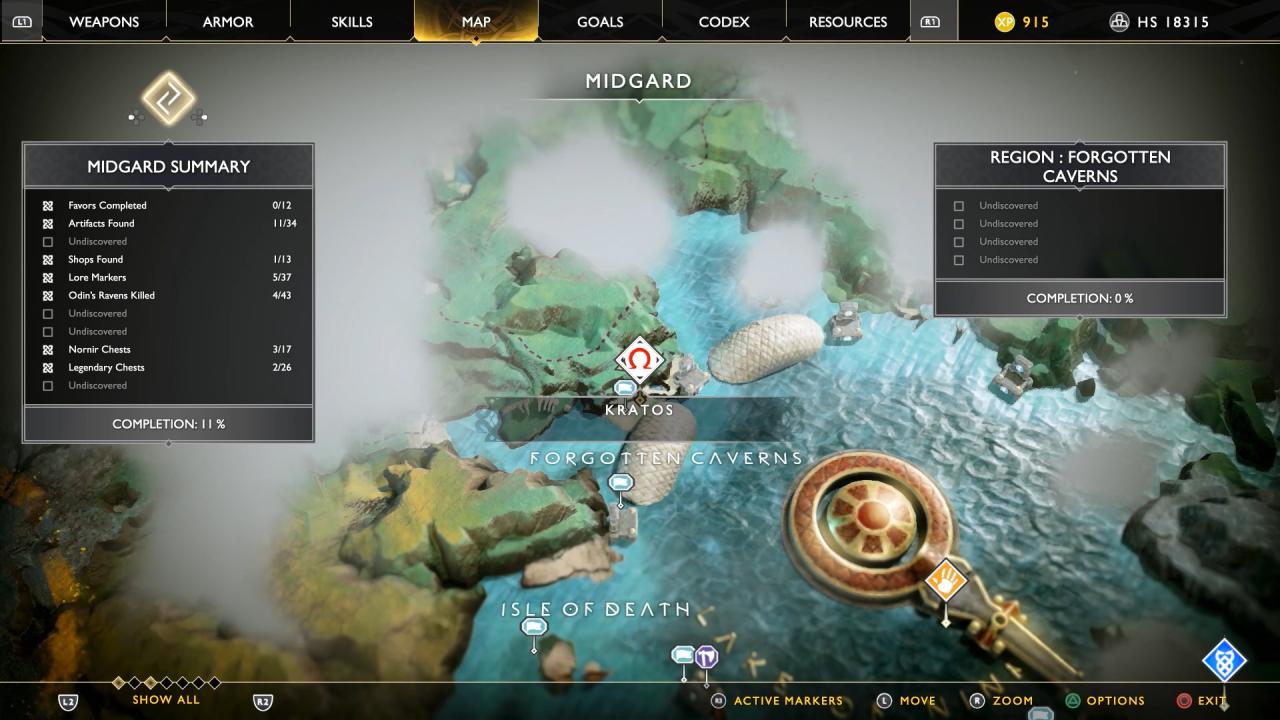 Runic Chests in Alfheim
For the next chest we go to Alfheim (Alfheim), on a piece of land east of Tyr's Bridge (Tyr’s Bridge). The chest is on a rock in the elven garden. This garden is captured by a huge number of small bells. Runes are hidden inside three of them., and you need to find in which, and do it on time. first bell, which one to shoot, hanging in the doorway, one more - diagonally to the left of the chest, and the last one is to the right of the entrance. 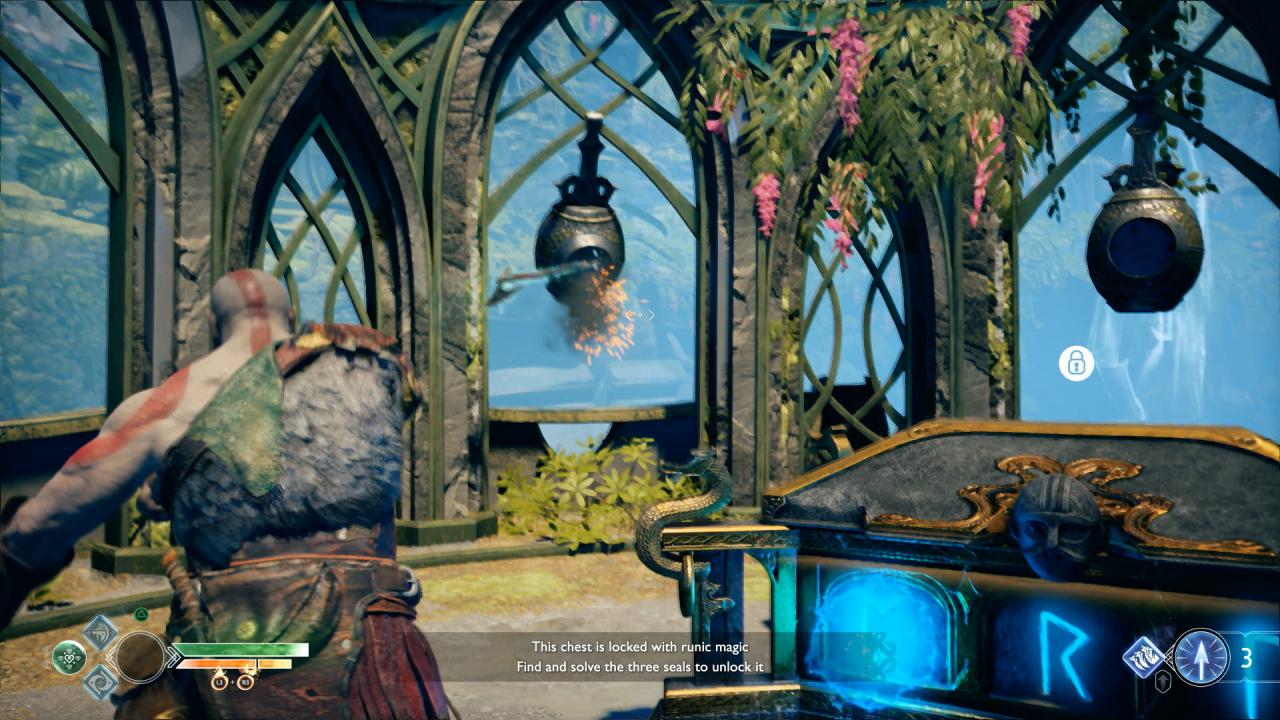 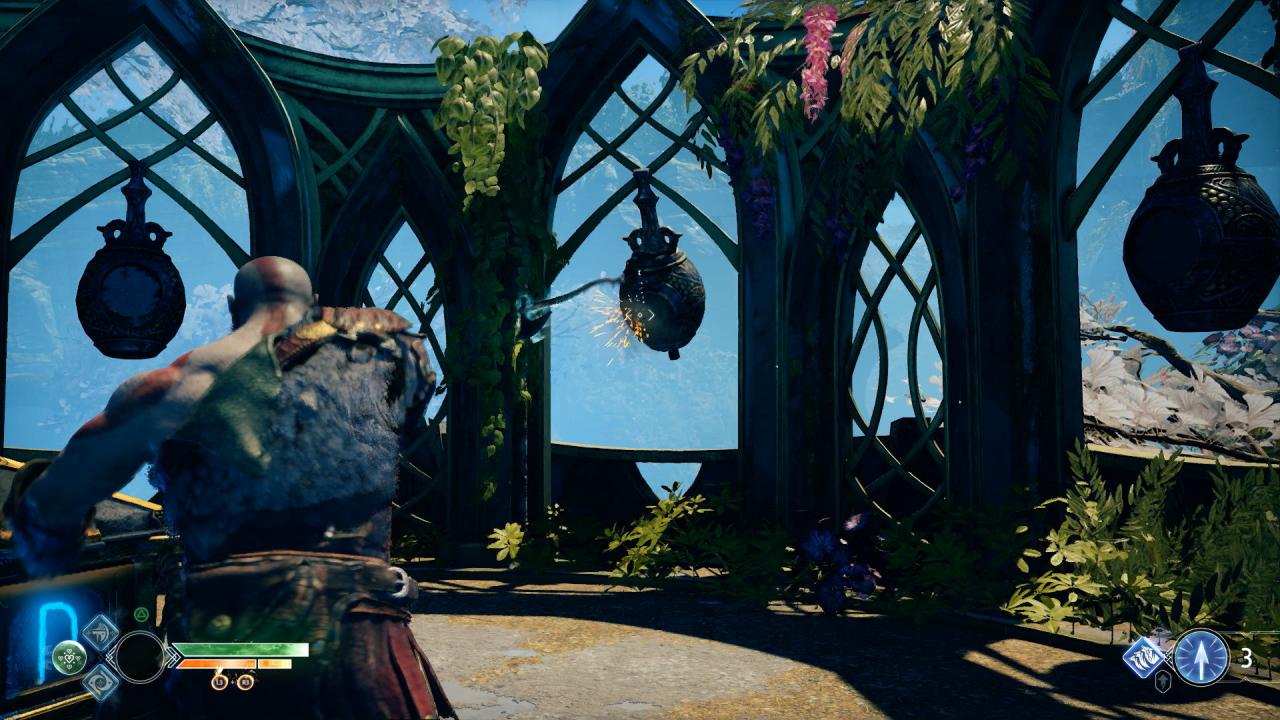 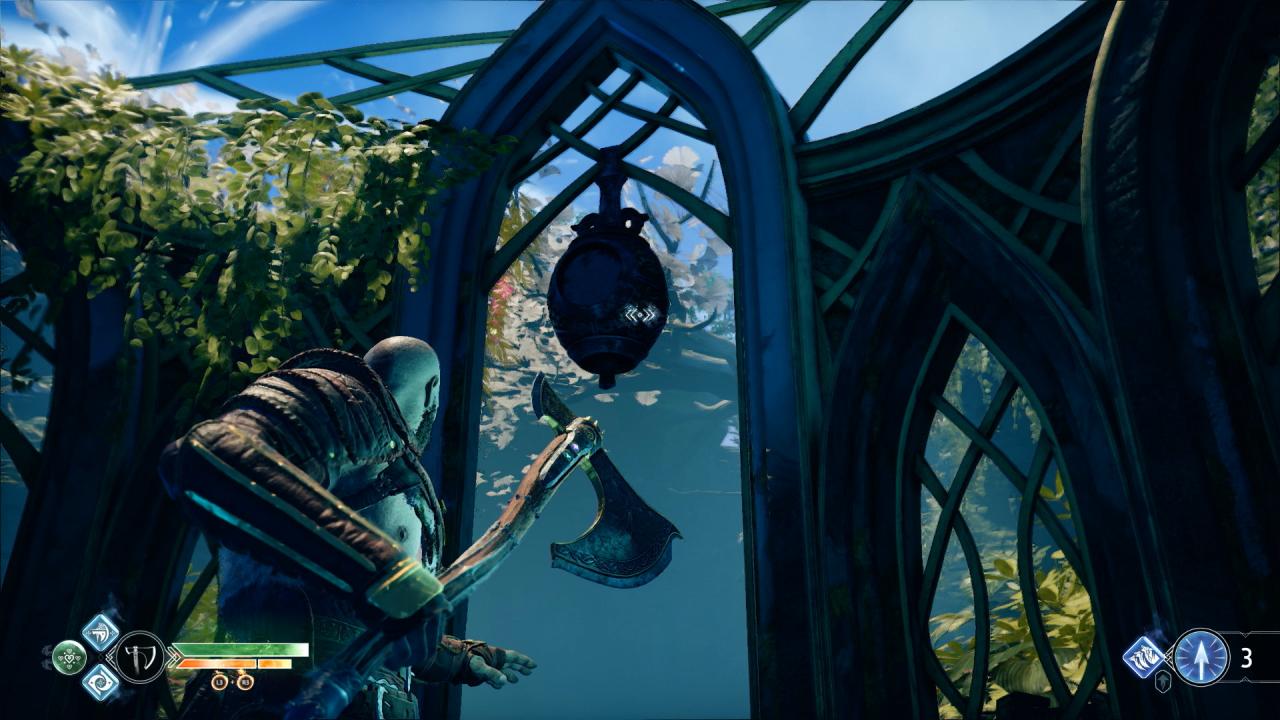 You can find another chest in the northeast part of Alfheim. You won't miss it on your way to the ring of light. Entering the Sacred Circle (Ringed Temple Trench), you need to overcome a couple of villains, and then turn left from the entrance directly to the chest. Here you will find a lever, turning which you will lower the bridge to the other side, but at the same time, the platforms on both sides will also fall. Everything should be lowered here to the maximum, and then shoot the mechanism on the opposite side, to slow it down. Turn around, and you should see the first rune behind you. The other two hang on the walls of moving platforms.. To get them, lower all platforms again, then stand on the edge of the middle one and take out the ax. When the side platforms will rise, you need to throw or hit with an ax at the right moment. 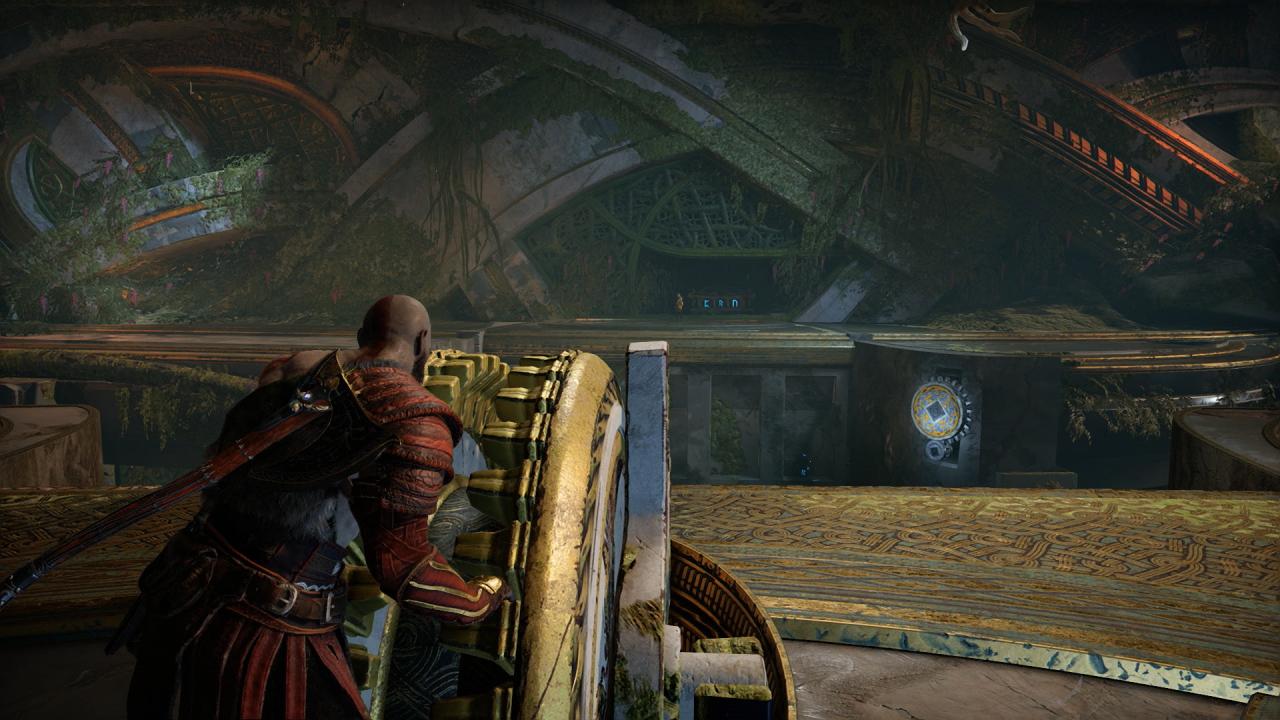 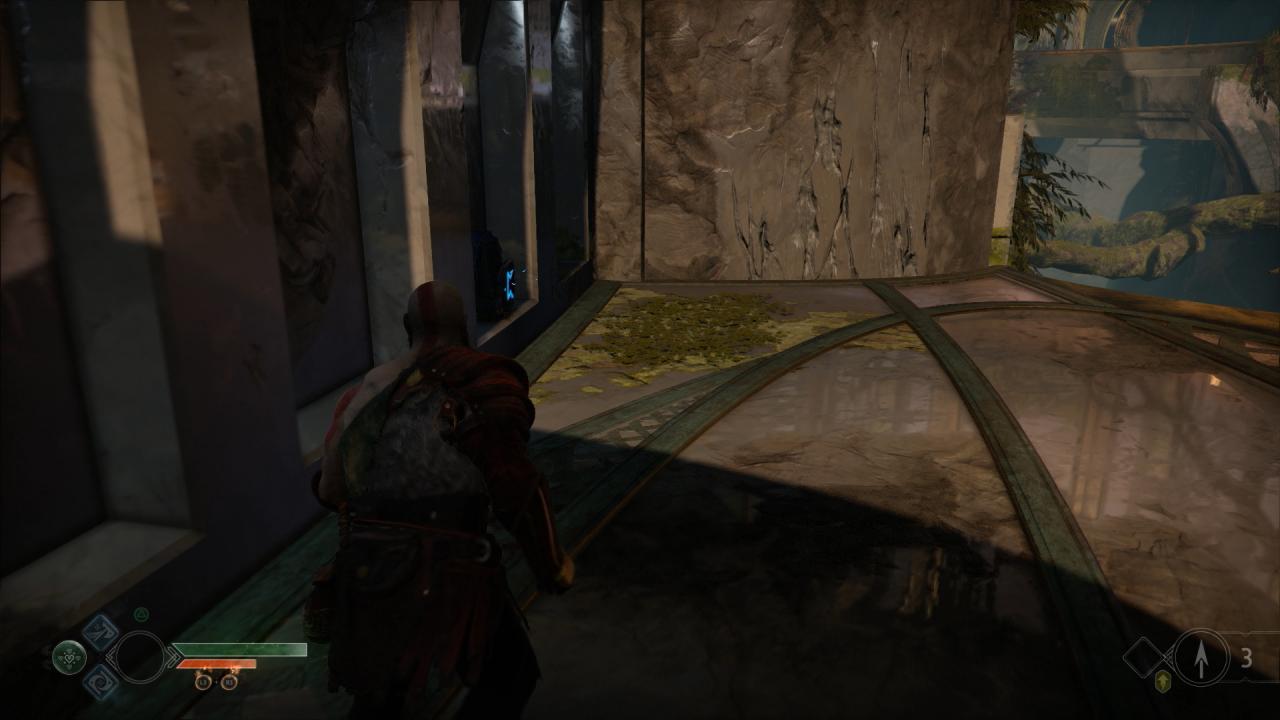 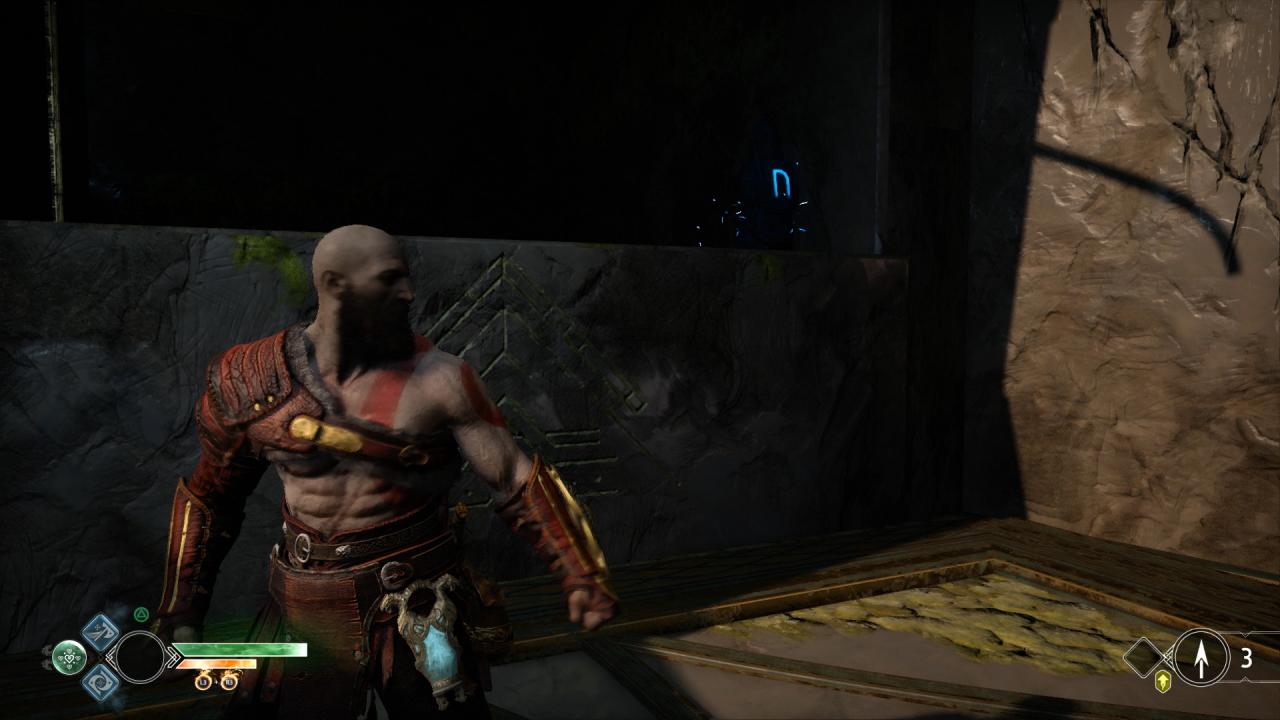 Runic Chest in Foothills
The following chest was discovered in the caves of Foothills (The Mountain). When you reach the suspension bridge, covered with red resin, you should notice the HP chest on the left. Go back down the corridor, by which they came here, and you should see another barrier on the right. Behind it is a shrine., and the first rune is to the right of it on the wall. When you lower the bridge and pass it, turn your attention to the right, and you will see the second rune. Use the lever, to raise the bridge again, and then block the cogwheel with your ax. After the bridge you will find on the right and the third rune. 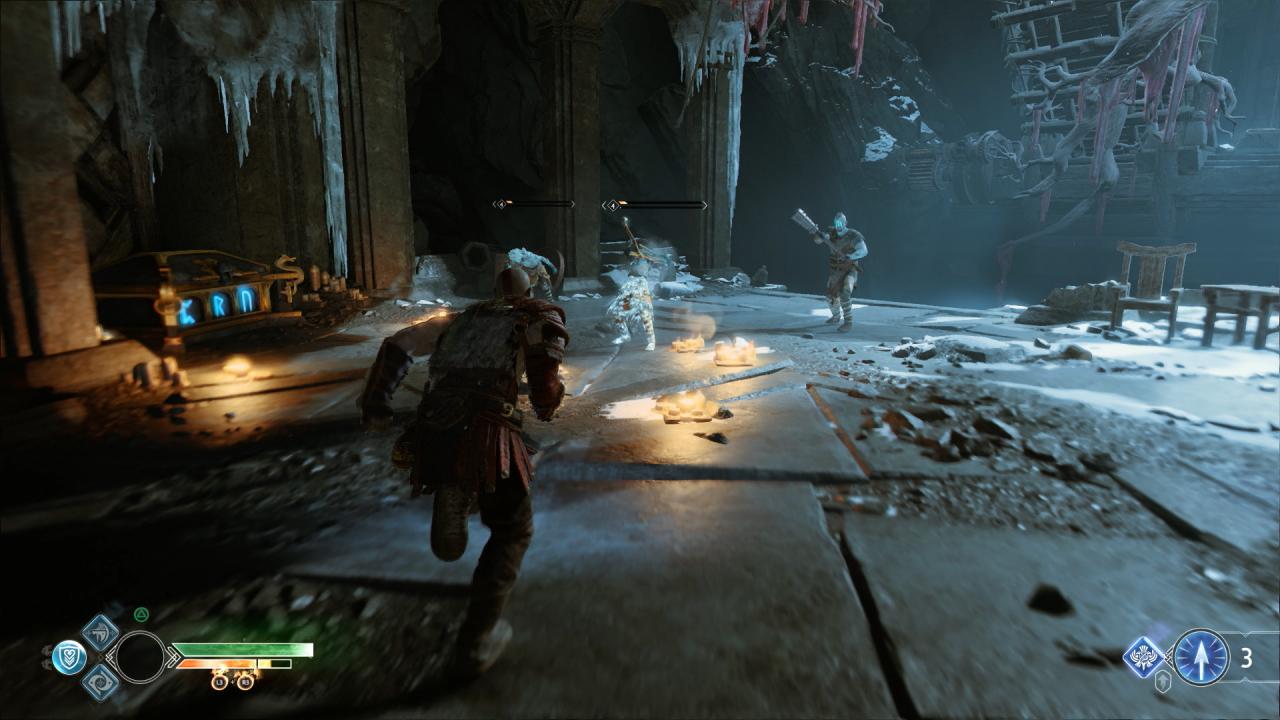 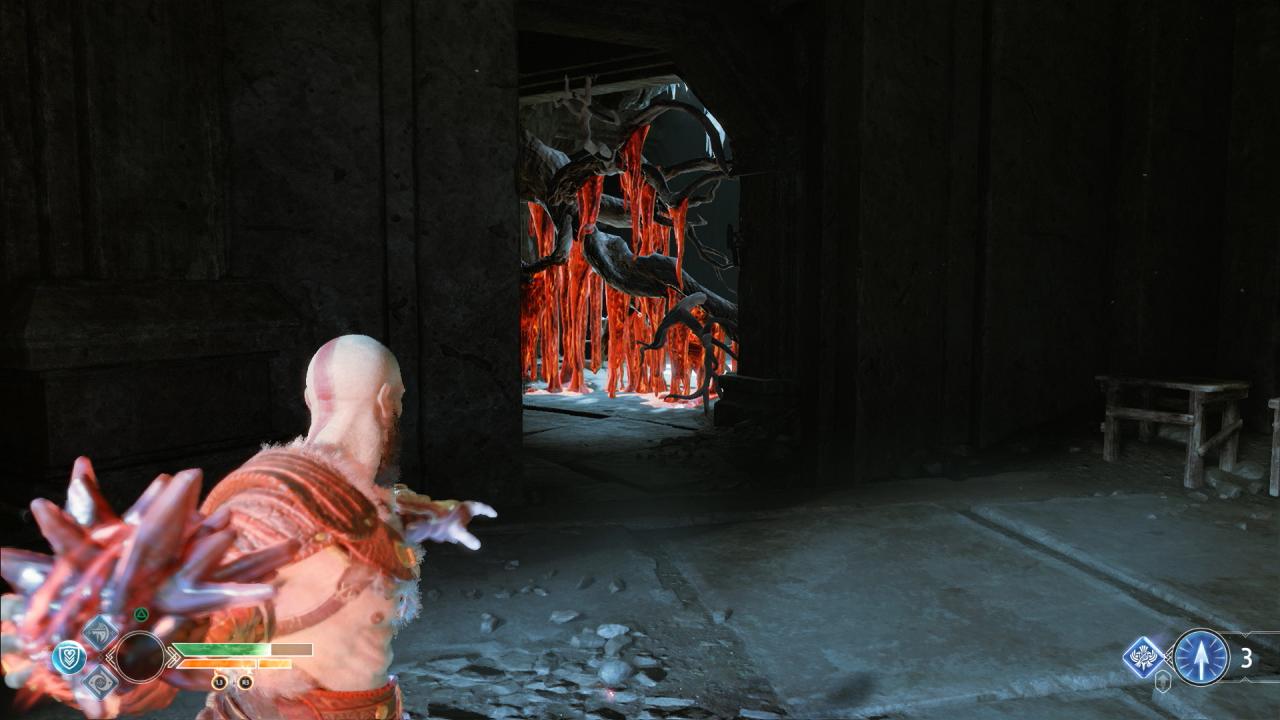 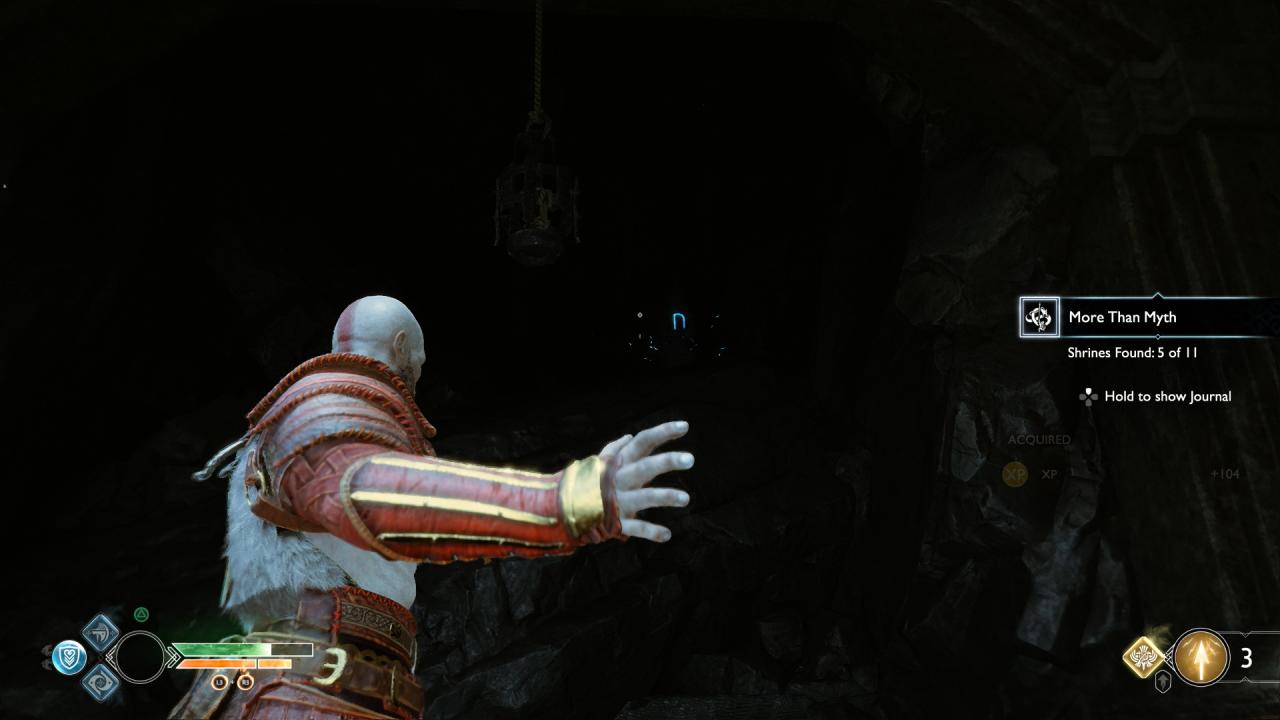 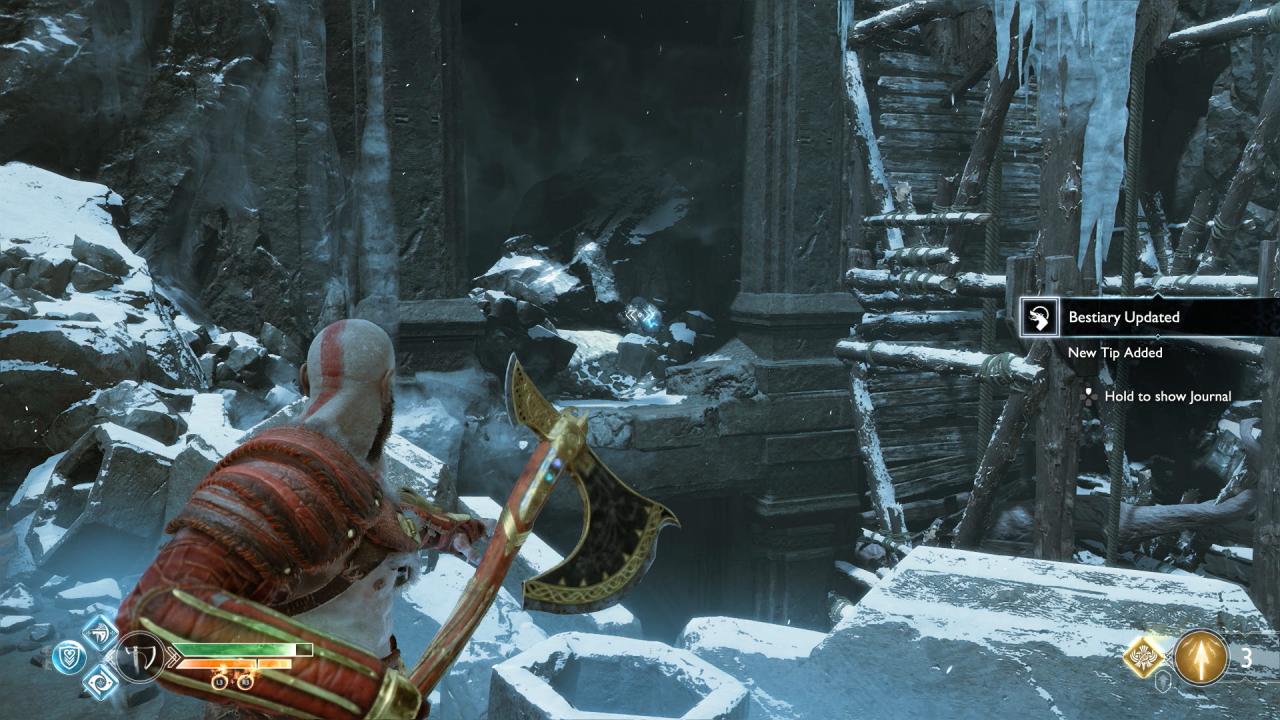 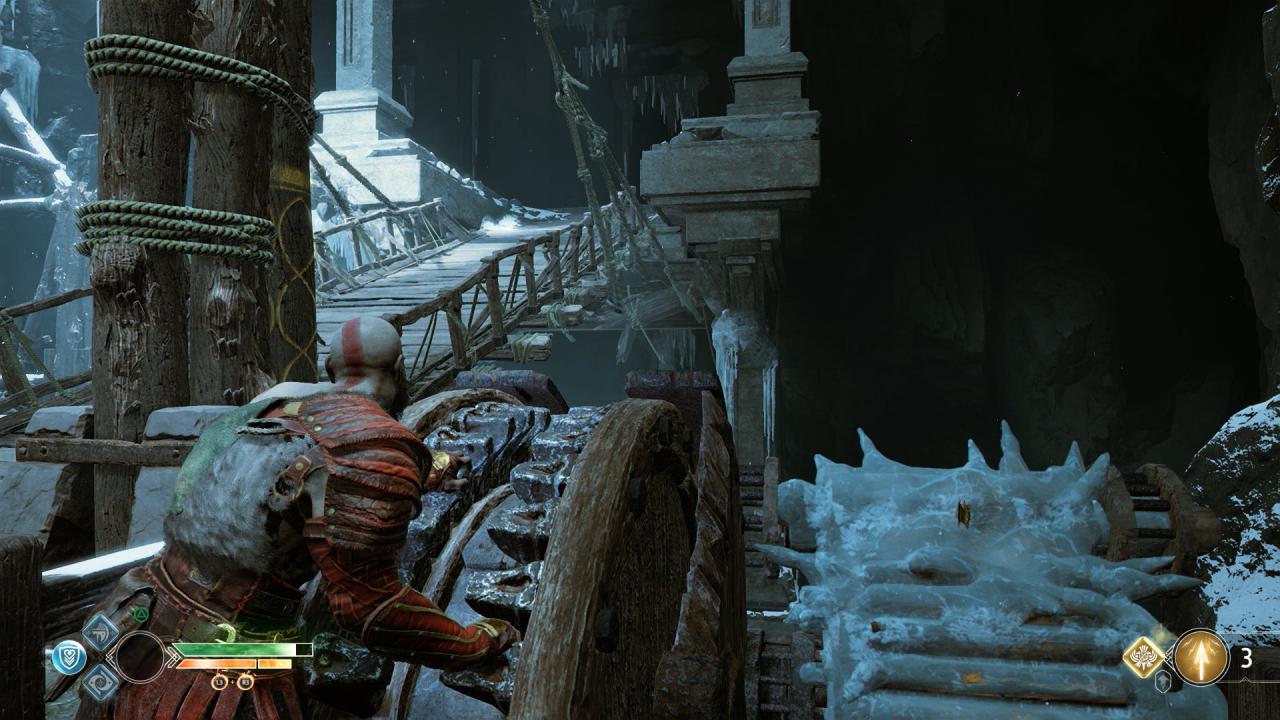 Runic Chest in Light Elf Outpost
The last apple rests in a runic chest at the Light Elf Outpost. (Light Elf Outpost), fortresses on the island, which will appear immediately after, how does the water go. Inside, a battle with a troll awaits you.. When you beat him, look around. You should notice the glowing rock. behind some boards. Breaking boards and shooting at the rock, to get to the chest. The first rune can be seen behind the chest at some distance. The second rune is located on the outer ring of the citadel, next to the lever, which allows you to go up to the top floor. The last rune can be seen on a pillar from one of the bridges of light on the top floor.. 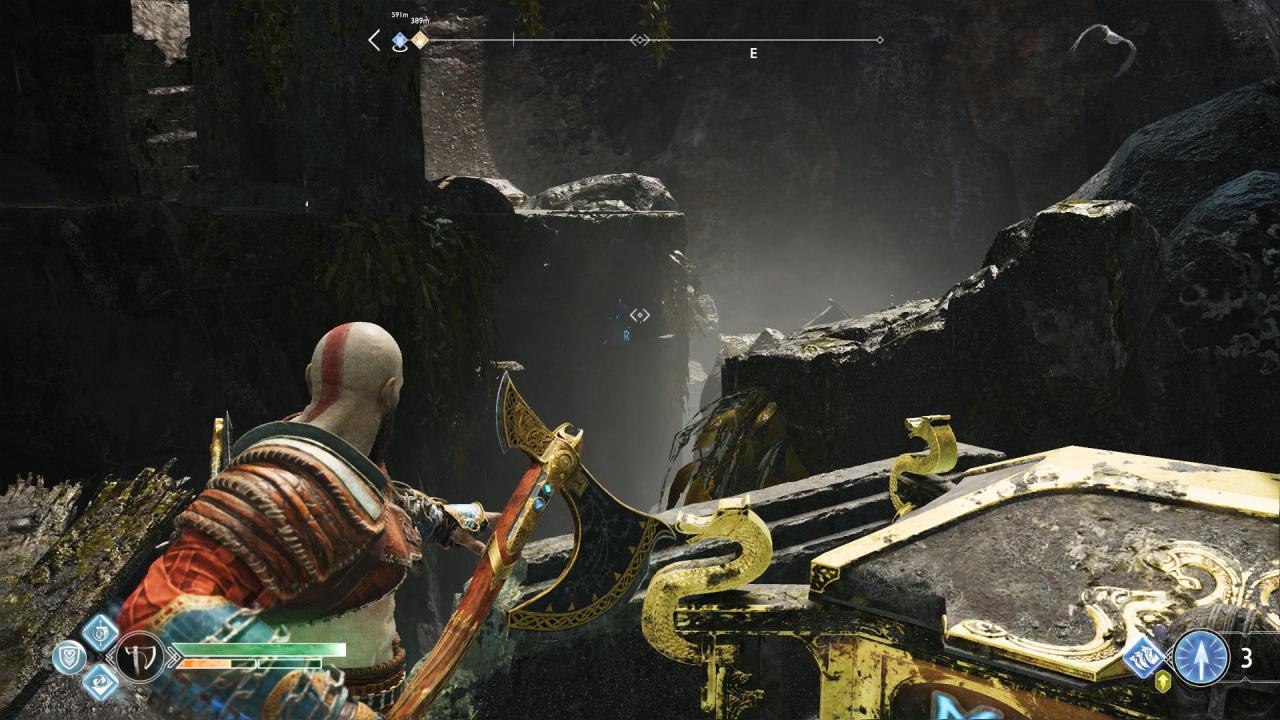 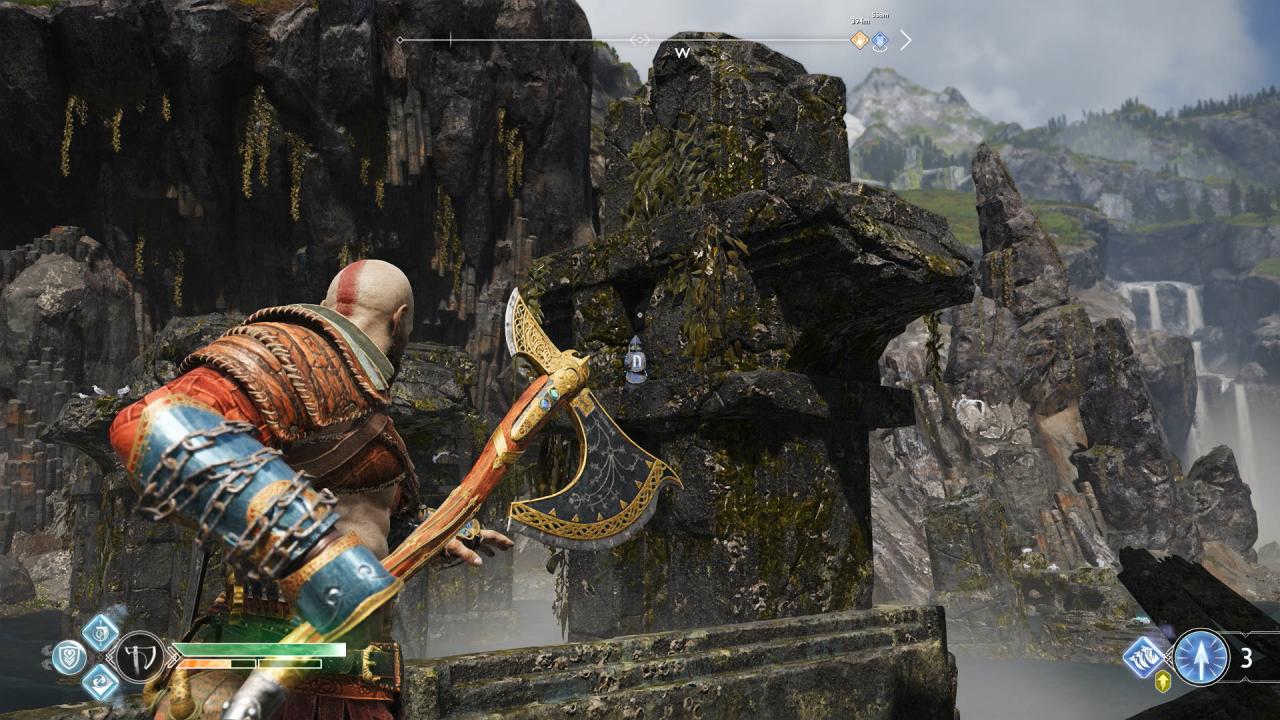 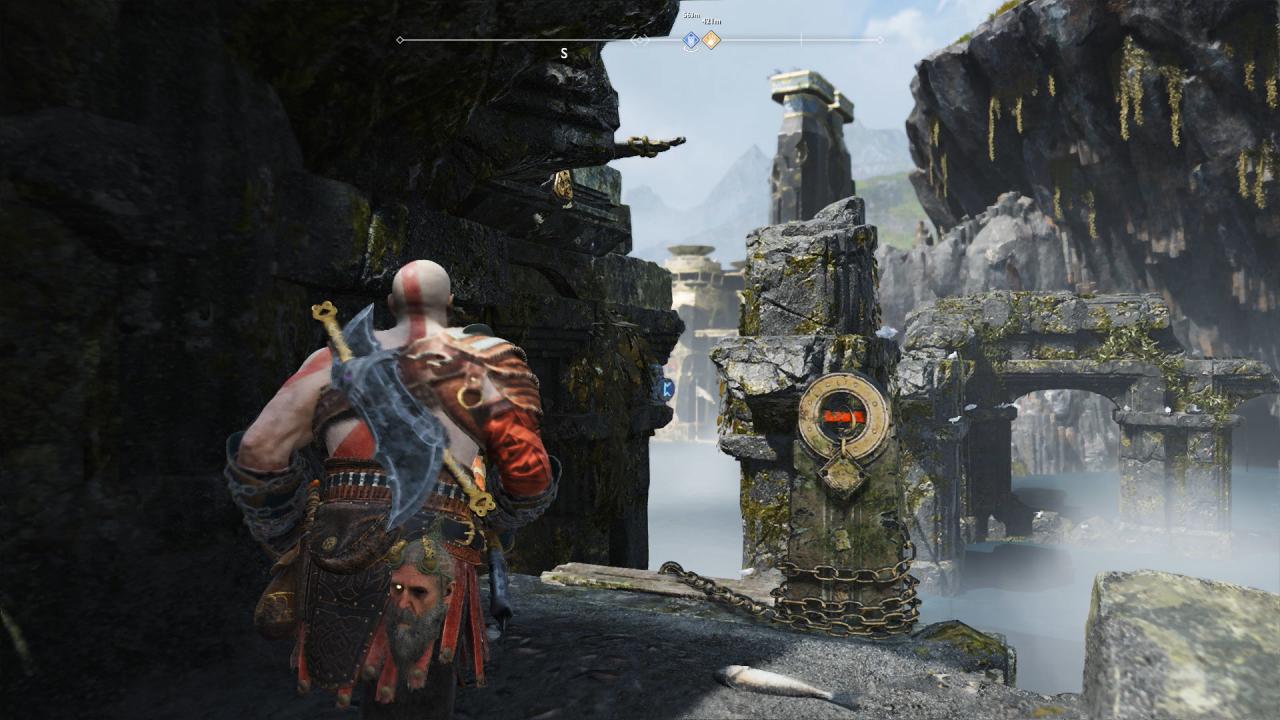