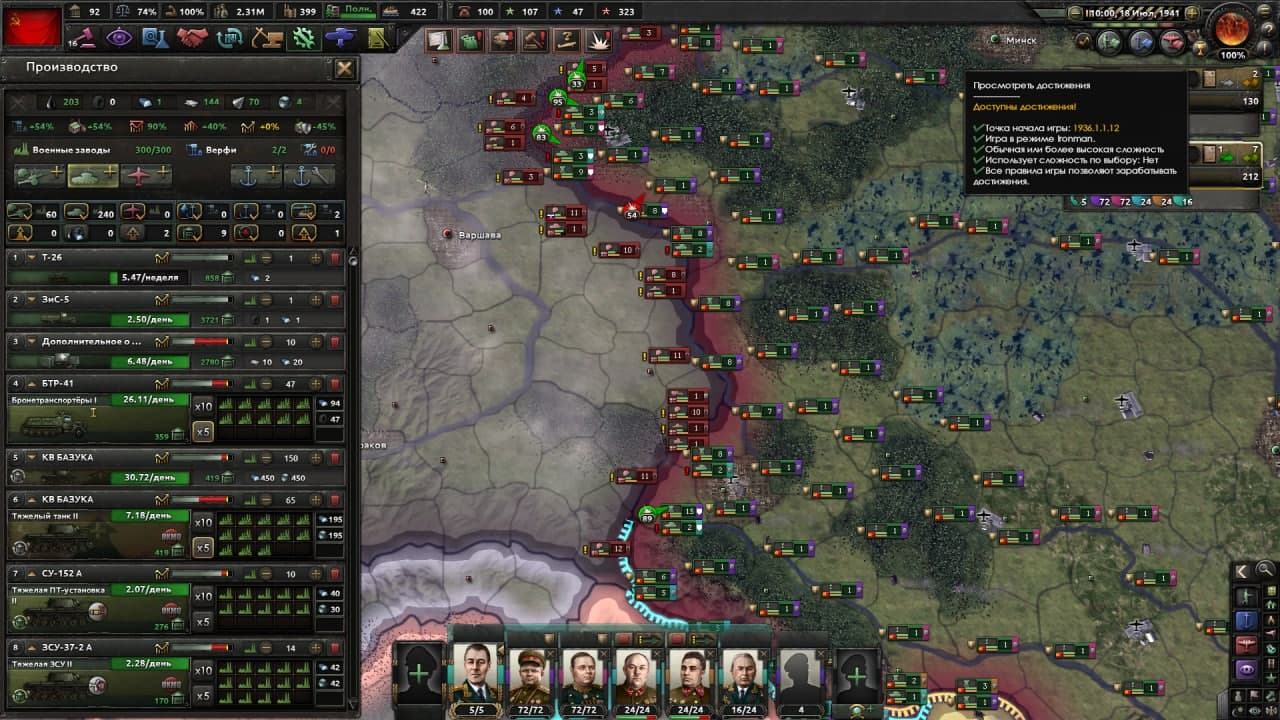 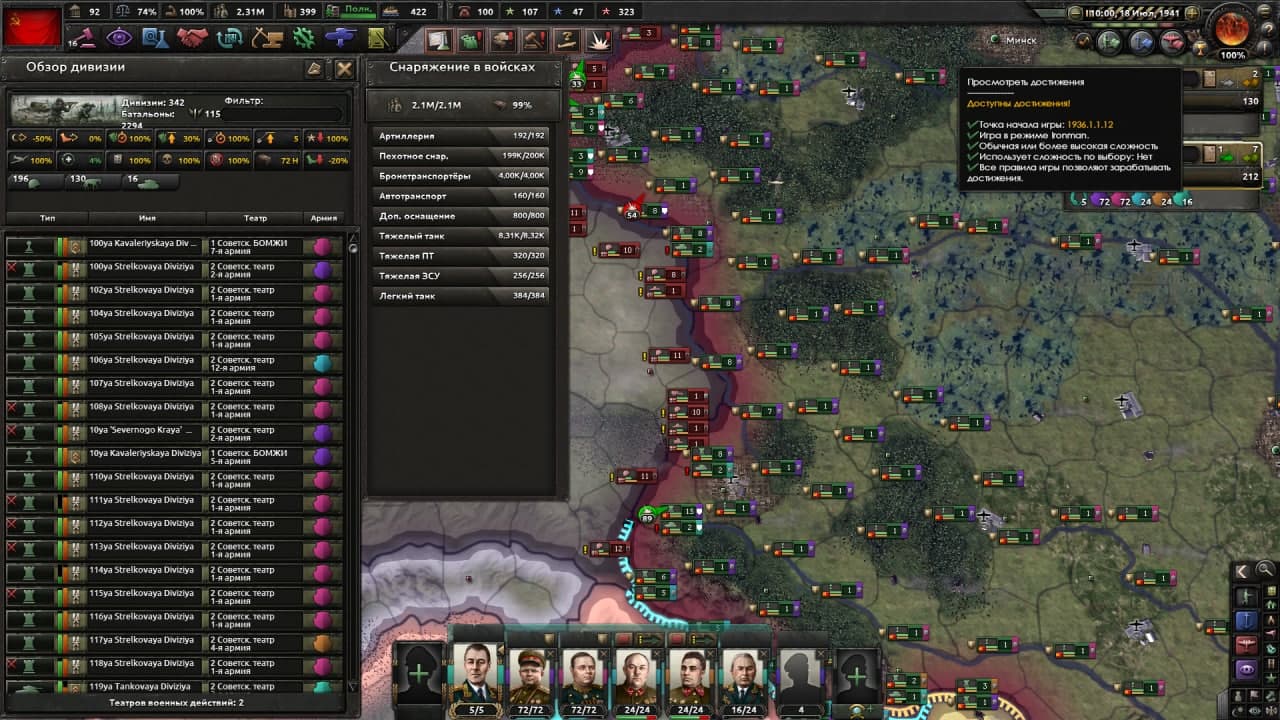 I consider the Second Doctrine as self-evident for any country, so no screenshot:)

The initial stage of the game 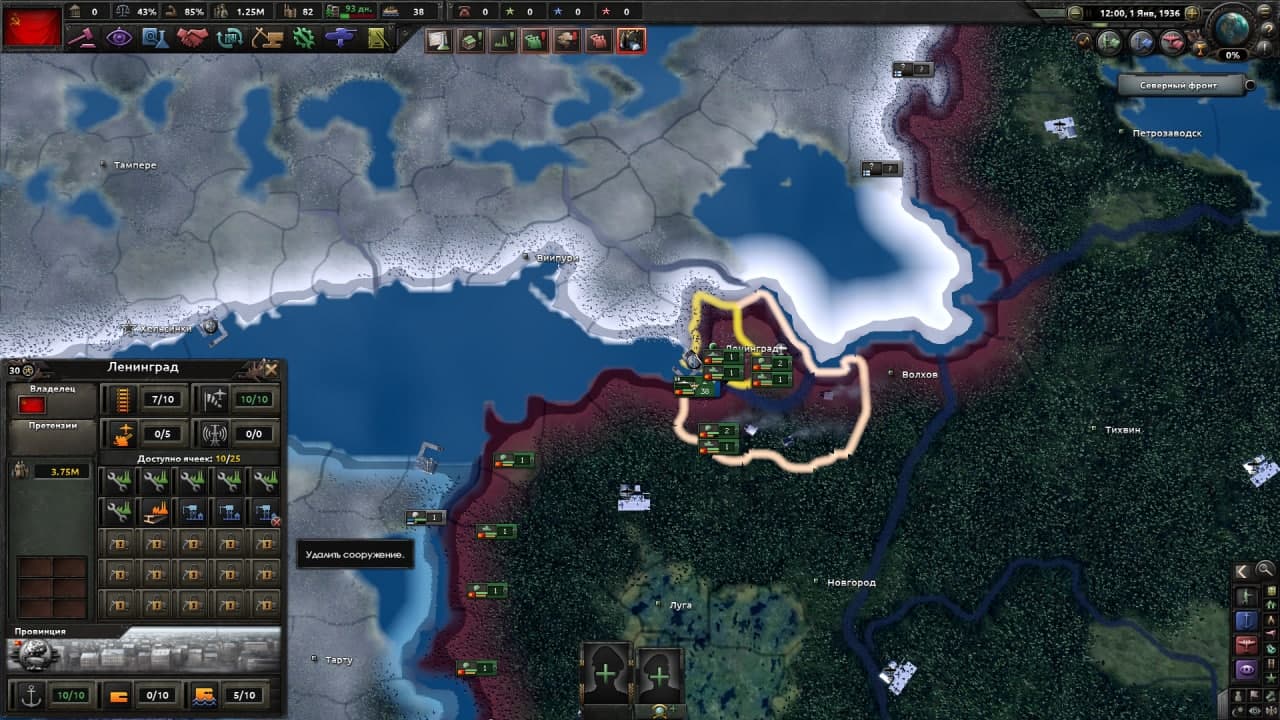 1 We demolish all shipyards whenever possible, under the MP where it is usually in the ban I will write separately 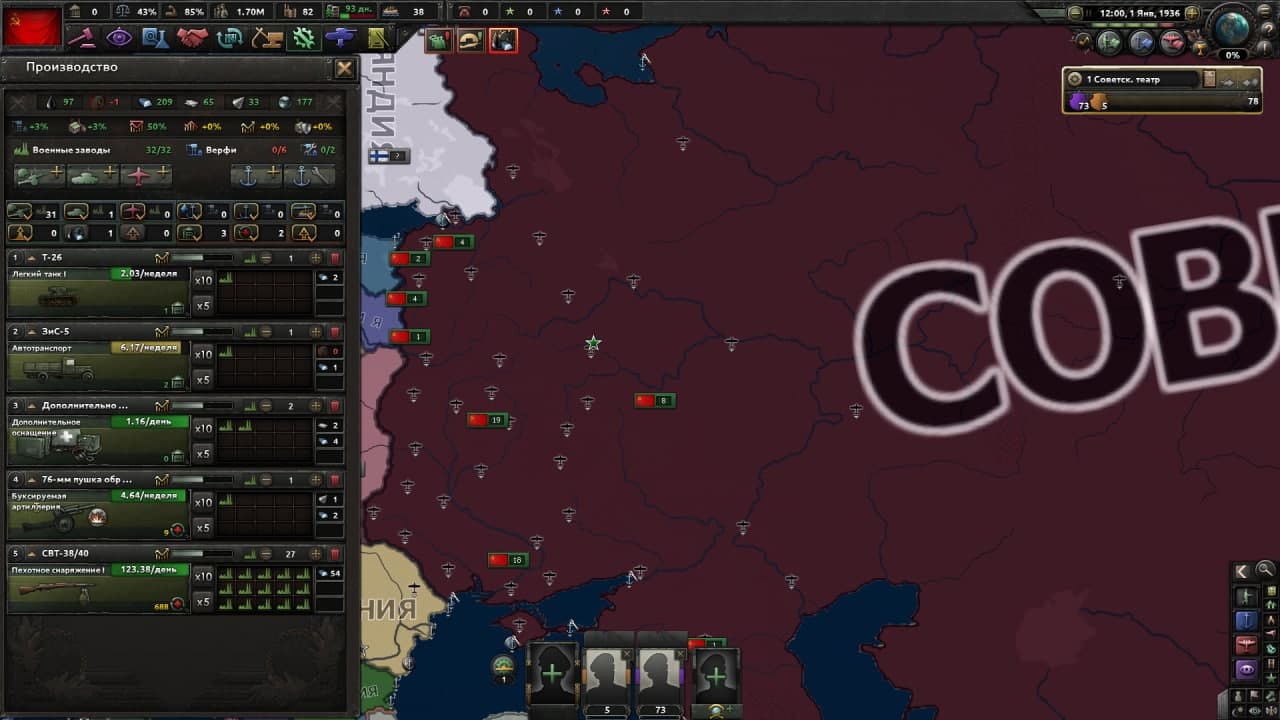 production piece subjective, especially in the network where there is a possible lend-lease from allies. So I show something like I put it. 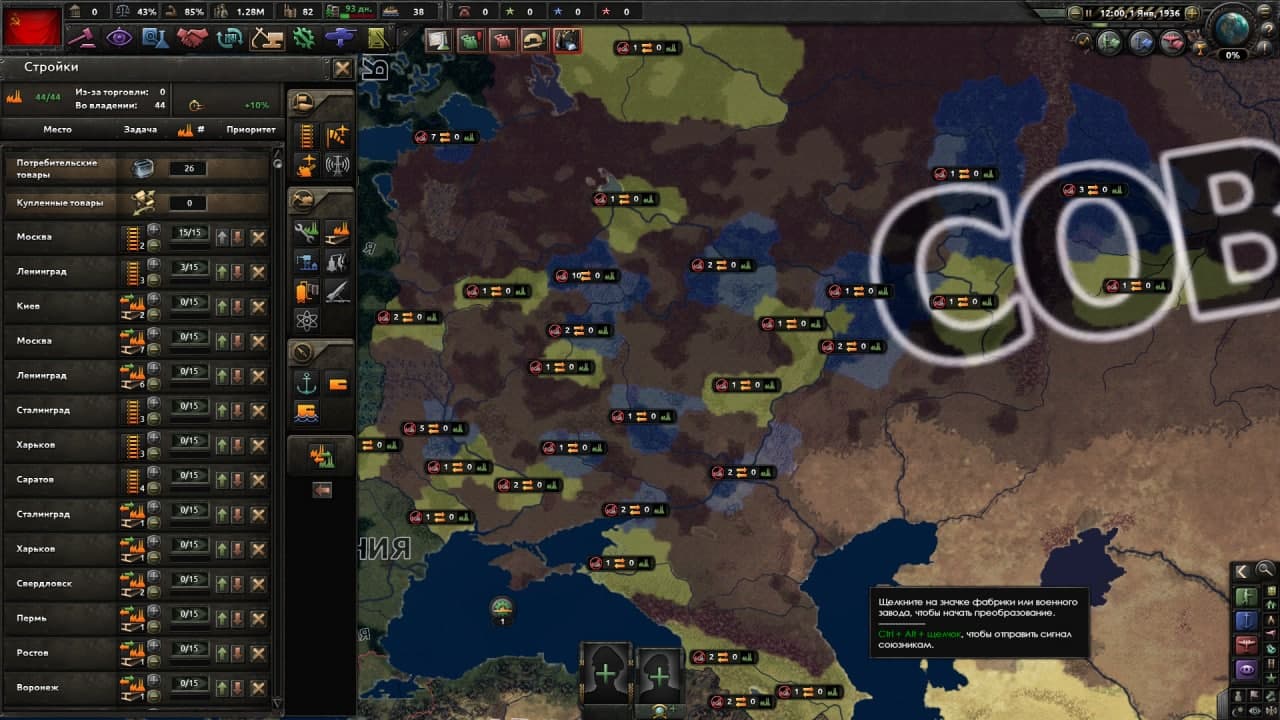 on the construction site, we build up these regions with infrastructure and convert all military men to 0 in descending order depending on infrastructure!
Next, we make some factories 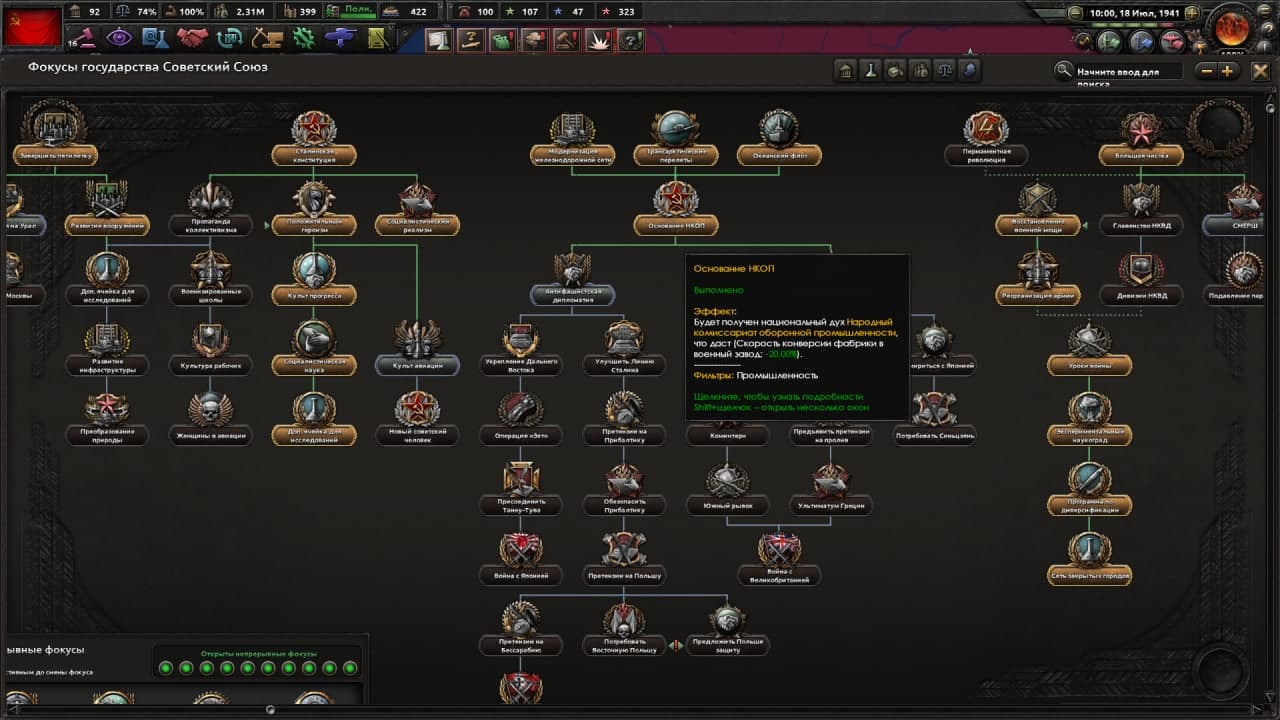 By Tricks:
1 Stalin's Constitution
2 Socialist realism
3 To complete the five-year plan, we get factories and then we take on 4 military factory(we also convert them after receiving)
4 Aid and down to an extra slot
Important! in no way are we going to Worker Culture(10%construction sites will not affect your prom at all) but any medium-level Germany in the network will severely punish you for it.
Further cleaning in order to remove the debuff on -20% stability, if your focus is on infrastructure in good regions, we take it first! Do not forget to go to NKOP!!! after we save up watered power and don't take anything( in cases where we will build infrastructure on chrome-steel, we temporarily focus on the speed of construction of this business 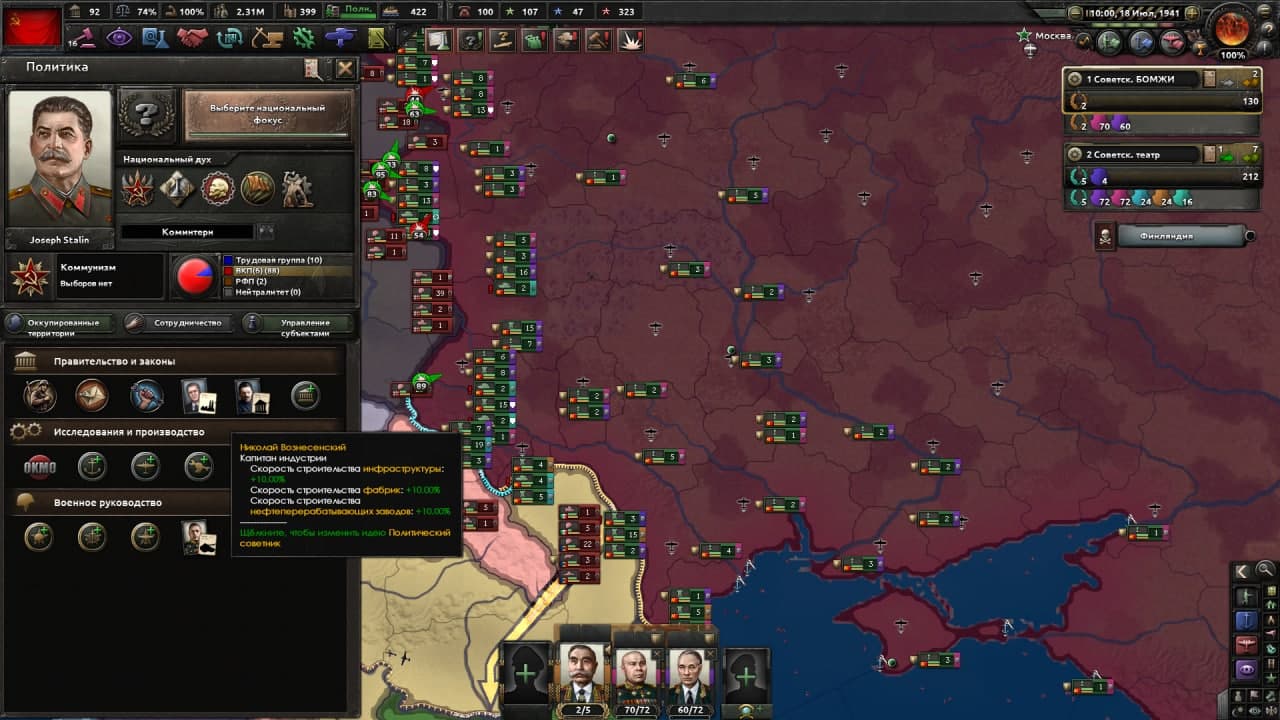 Political power
1 Military Economy
2 Industry Captain
3 Free Trade(or an agent for theft)
4 People's favorite for stability + 15%
5 copy 150 Political Power to Increase Stability, improvement of working conditions(100watered.) promise of peace(50watered.)
6 increasing support for the war in the war in China(50watered.) further on the speed of learning the Doctrine10%(150watered.)
KB for prom decision controversial, to take or not to decide for you
Further 3 military advisers as in the screenshot( Rokossovsky,to disguise and restore orgi)
Cleaning:
Khrushchev
Tukhachevsky
Yezhov

Important!
before the war with Finland and the receipt of Totalki we do not take the Baltic states 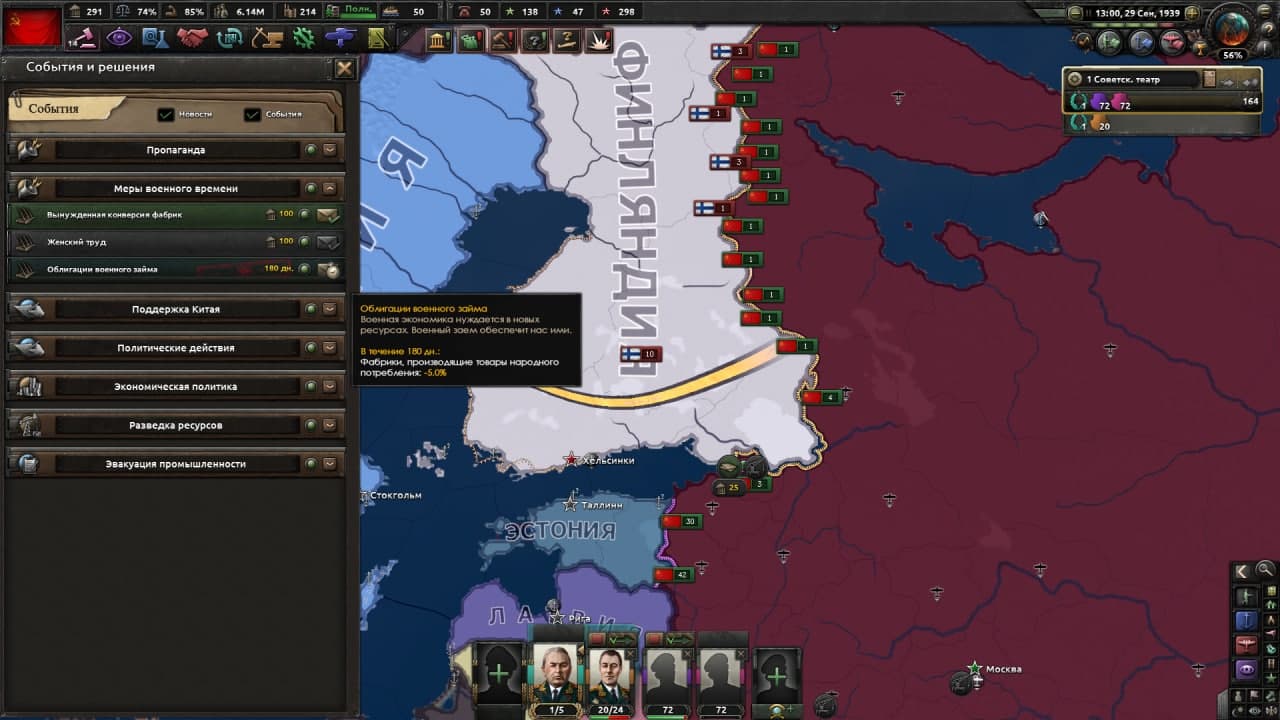 We will definitely run the bonds right away, then we send the atache to China( in case of a ban or if Japan took China, we will live military support for Finland and then if suddenly you do not have enough support for the war on the Reich.

after we buy out all allies or bots for all our factories.
Under the MP! as a rule, in normal network game mods, deleting the prom is prohibited(what was in the beginning with the shipyards) or cut, but total betting is extremely rarely prohibited, Therefore, we ask allies to remove purchases and boosts for licenses, and we kindly ask them to temporarily redeem everything that finland has.
During the finca, the Reich usually farms Poland and takes France, so the speed of the game is not great, really if a coordinated community does everything for 1 day. 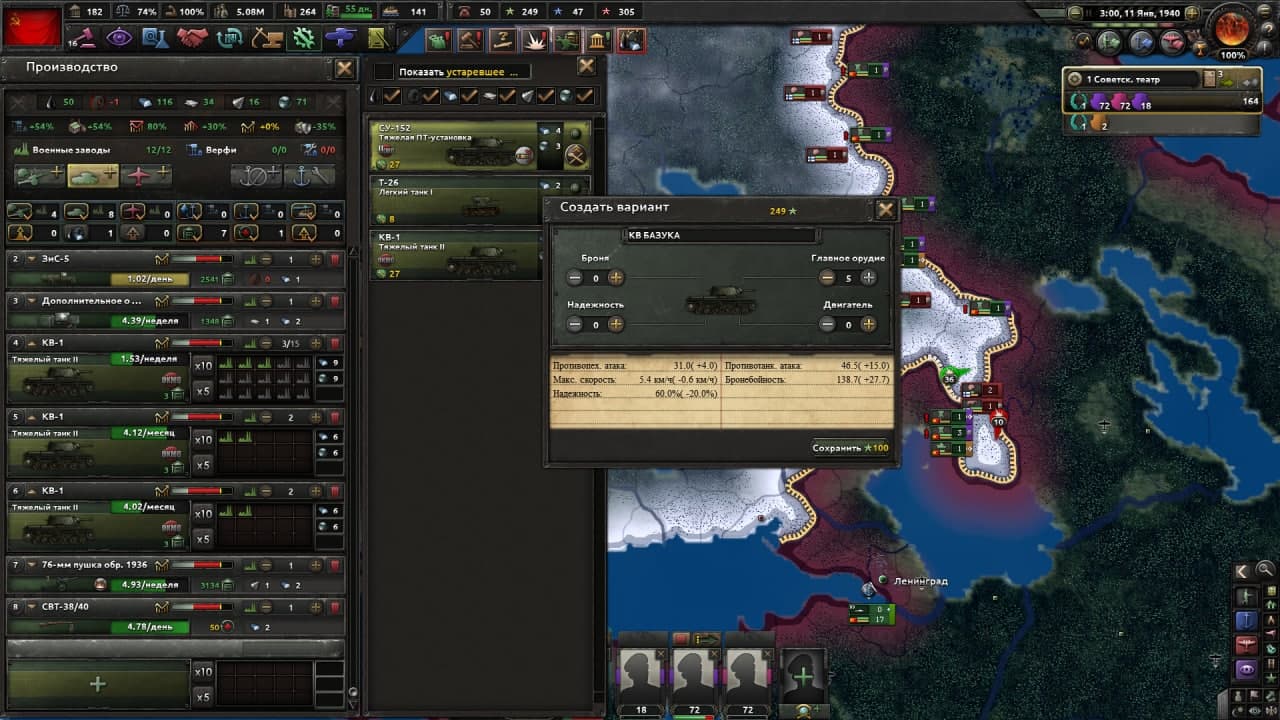 We teach when there are days left 360-370 by study time, since we have a strong conversion and early(450-470)we don't need him. Priority leveling Cannon,reliability-speed 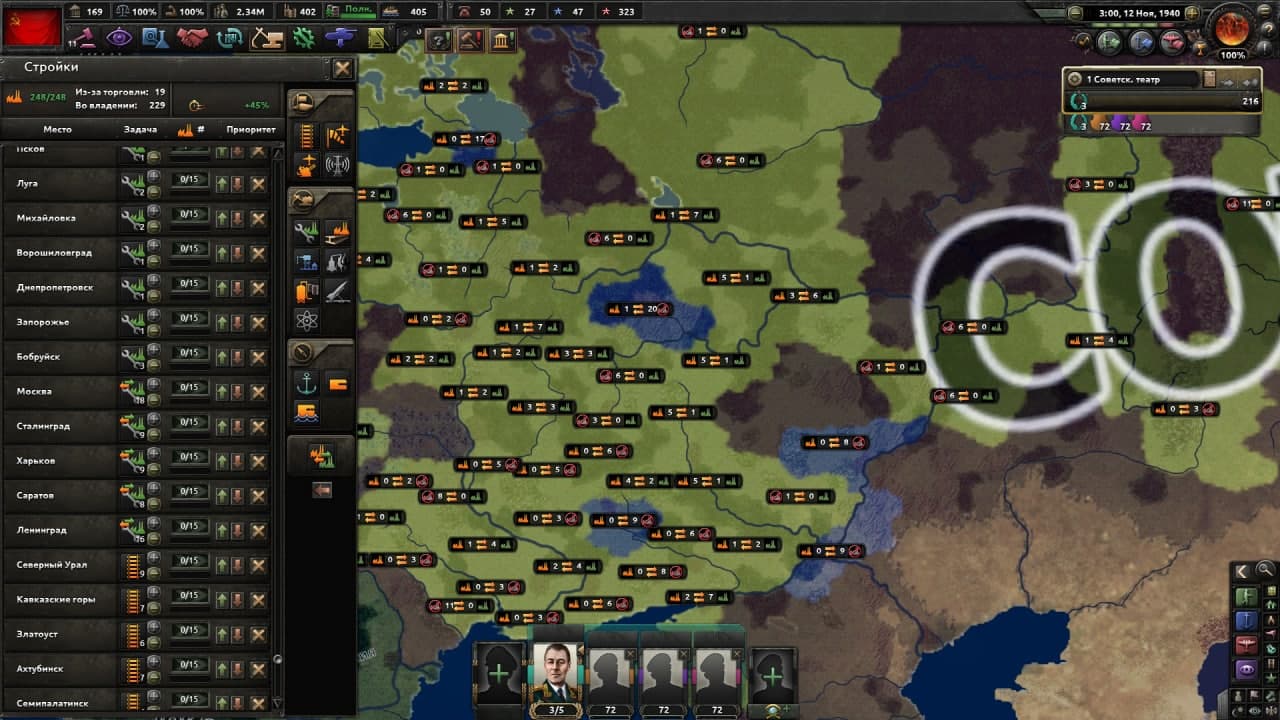 Reaching the number of military factories(150-160pieces) we prepare for conversion the regions that we have built up with infrastructure and factories.
For production, of course, everything is in TT in order to accelerate. 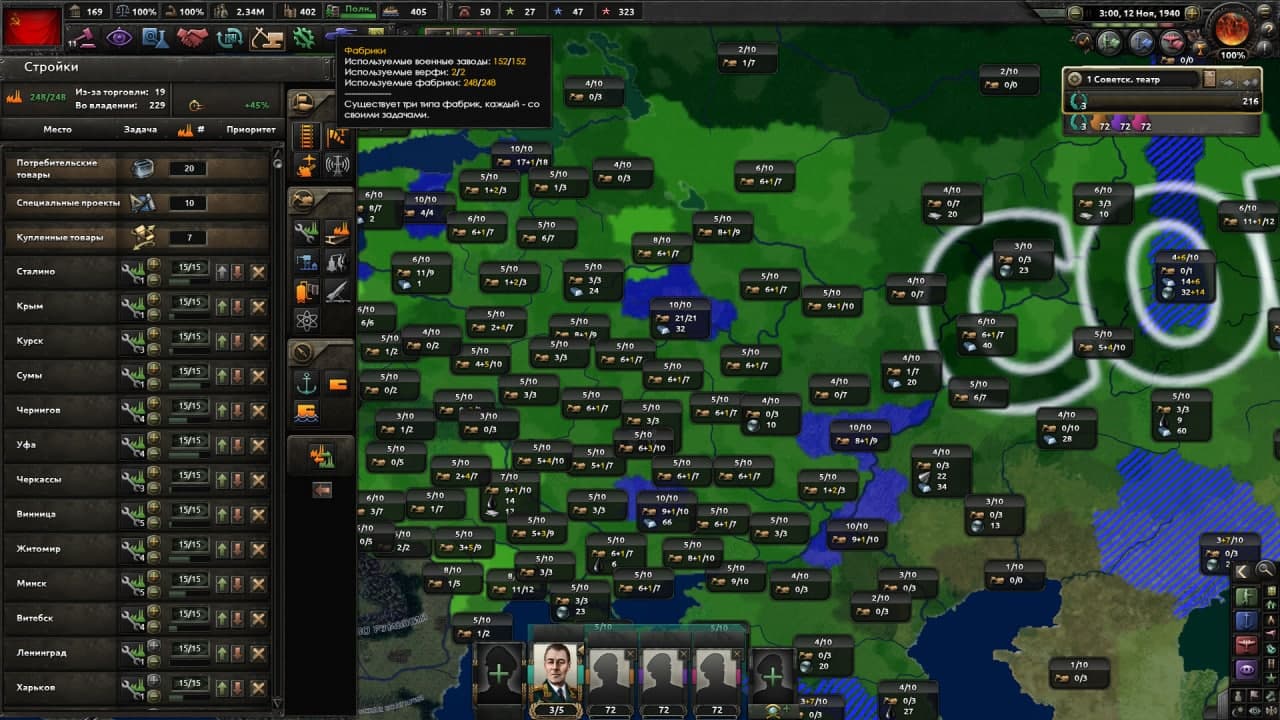 Templates + Generals(Subjective opinion of the Author!) 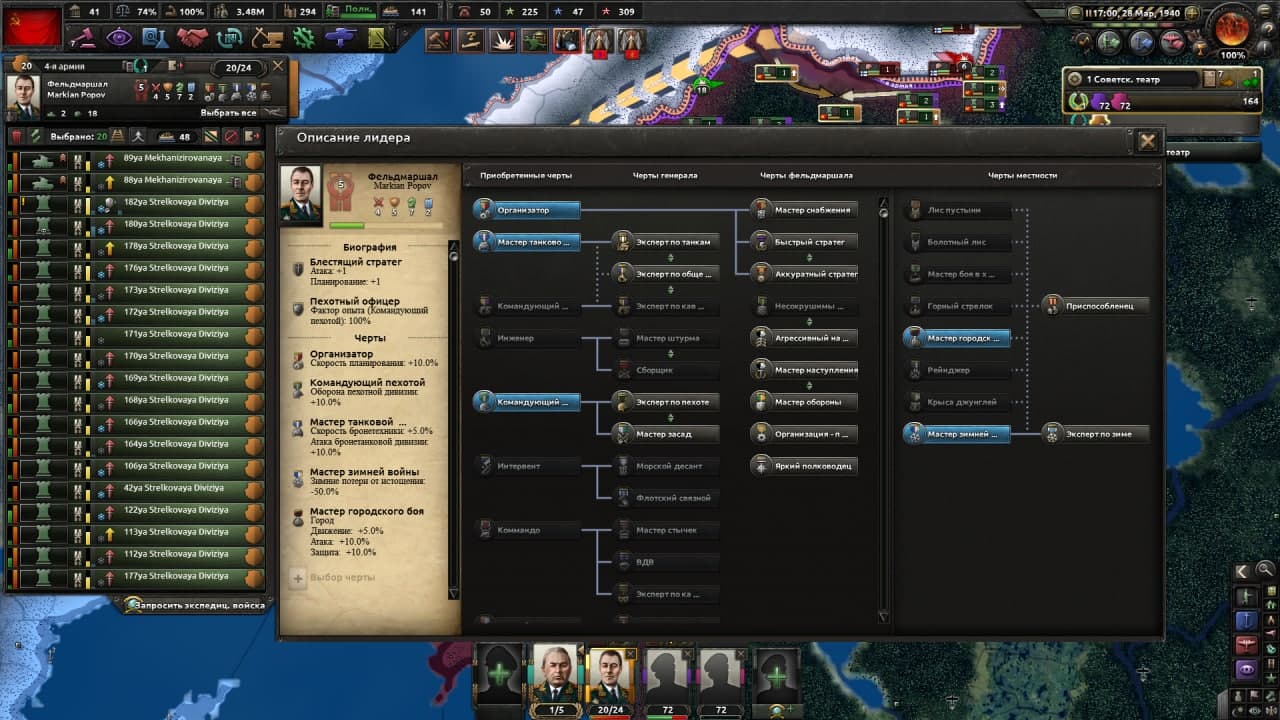 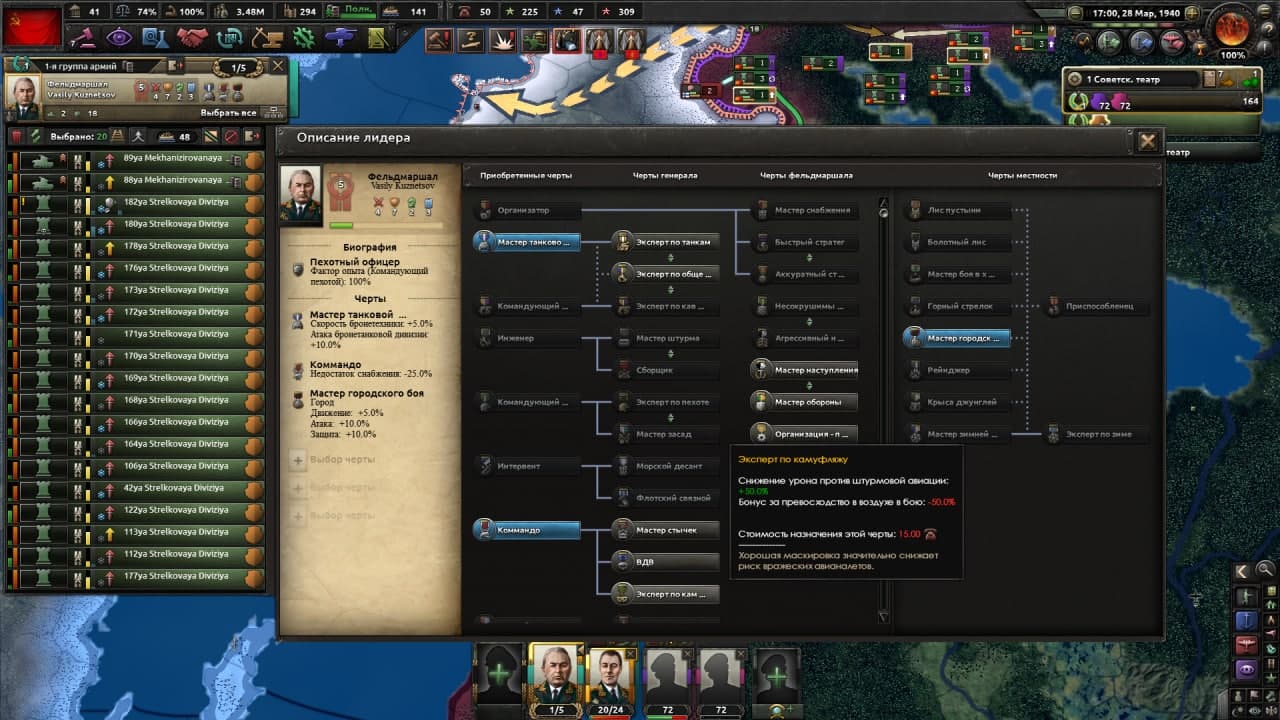 Popov will be field marshal, Kuznetsov General in order to neutralize the damage from the attack.
Why is that?
Popov can actually be taken out of Finland at 8-9, which, under the skill of a field marshal, +1 attacks will 9-10 attack and be the maximum value in this game,but not with my luck:) and autoplanom.
Spaniard with China, if possible, farm! But even with one finca it is really possible to make extremely serious genes, there would be a desire.
On average 6-7 attacks come out of Kuznetsov and 6 consumption of supplies + remove the damage from the attack(about 7 the level of defense in my screenshot seems to be without comments)
Don't forget to draw the plan from the general, in order to get an organizer and access to the consumption of supplies -15% Field Marshal, extremely useful skill on the eastern front.
It is extremely convenient to drive 6-7 divisions of a bot in Helsinki on a Finn and it is easy to farm a master of urban combat(extremely cheap and useful skill), well, and a forester with a swamp in a finca, no one bothers you to do it.
Don't be afraid to swap gene and feld, even when they are on the way, they get experience and continue to farm skills!
Adaptation, if not prohibited, is mandatory and paramount.
General and Field Tankman skill is a must 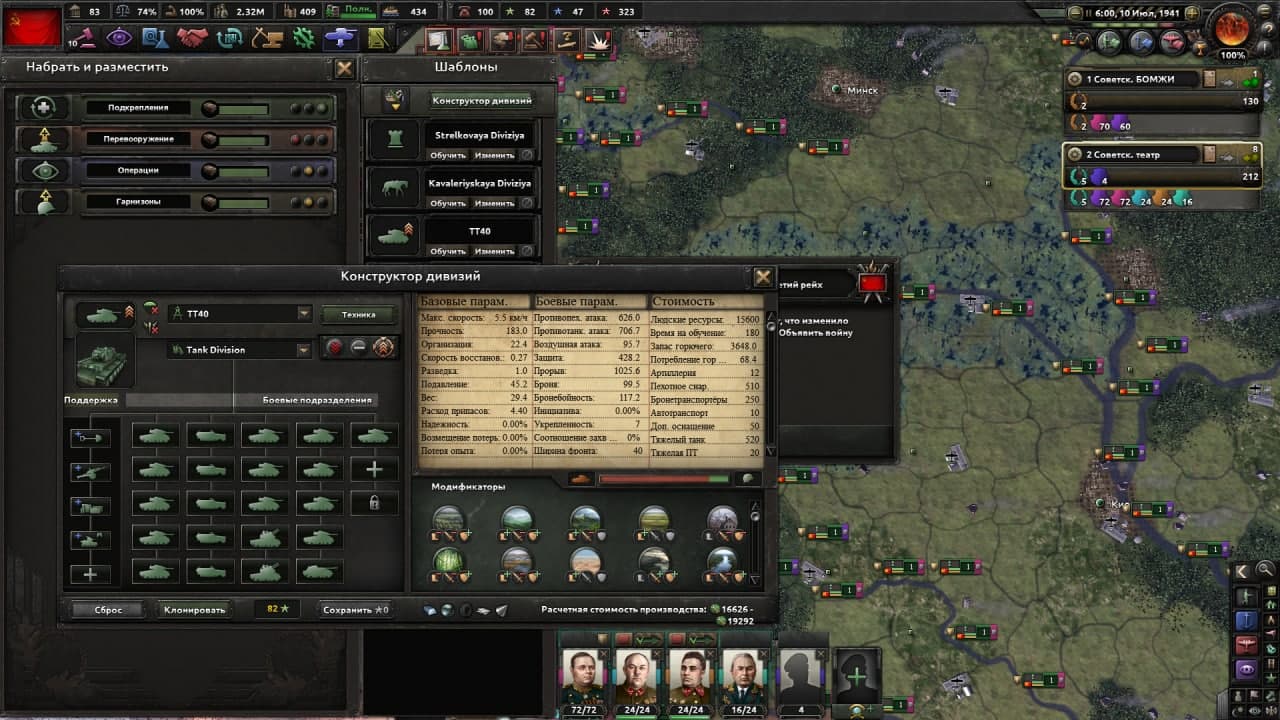 Under mp, it is necessary to heavy pt, do not be greedy and put heavy pt on 5 cannon in order to feel confident, if the Reich muddled the pattern on 1 dock( ideally 2 heavy tanks of America under license for 5 cannon)
For single player players, if you have read up to this point, boldly put 2-4 types of art instead of this all.

Without Abuz to steal prom from bots 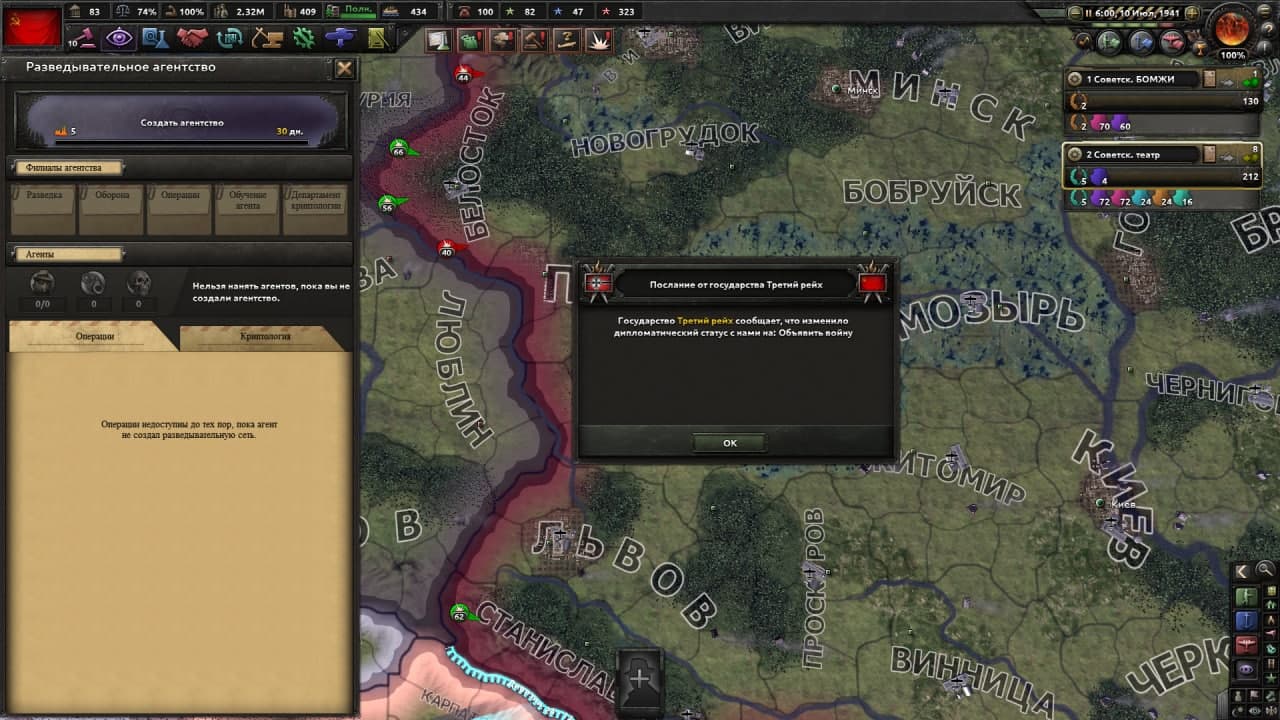 Possible Questions:
1 Can everything be done better??
Naturally, many variations of construction, I just showed the most effective software
my opinion.
2 This is the construction site?
Not, the developers have endowed the Union with the largest amount of building space, in MP on
strong boosts inflating the USSR to the maximum, we are able to quite Seriously Rebuild
Germany and make 400+ warriors to war. But!!! starting from the 200th war, we have an easy
lack of resources, crossing the threshold in 300+ military man lack of resources becomes
critical.
Therefore, making the maximum bet on the Soviet Union in the MP, the domination of the Allies at sea
including America is mandatory, as crazy things like ransom are possible
cubes for chrome, etc..
3 What about the Navy,Air, 1or4 docks?
The purpose of the Manual is the most efficient building, and underrated by the hoy community4 conversion opportunities. You have the right to build as you please, everything is at your risk under MP, in the single on the cup, the whole world is painted with art-pets on anything, therefore we do not consider this option.
From Boyarin