What, I decided to post my build
(if you find errors in my build, write in the comments, I will accept any reasoned criticism)
Parse analysis (All Maps)
The first map allows us to recover when picking up cartridges from 16 to 24 hp,slave 3 seconds.
If the sharper has less HP than the teammate, he gets on 20% healing from patron. Stacks up to 3 times.
The second card increases headshot damage by 25%
The third card gives the opportunity to receive teammates 50% the cartridge you selected,slave 5 seconds. Increases HP by 20%
The fourth card increases stealth by 1 (useless),wearing armor affects movement speed by 15% less. Experience points at the end of days and contracts increased by 45%.
The fifth card is similar to the third, but in addition to patrons, your teammates also receive 50% health.
Increases HP by 20%.
The sixth card opens the bag of armor ( most useless item), you get on 135% more cartridges. Does not work with custom shotgun ammo and DMR assault rifle kits.
The seventh card increases the amount of HP received from the selection of a cartridge by 8.
The eighth card gives a buff to damage by 5%, the speed of interaction with first-aid kits is increased by 20%
The ninth and last card is similar to the seventh..
Row Completion Bonus: The chance of getting a high quality item after completing a contract is increased by 10%.
Manipulator. 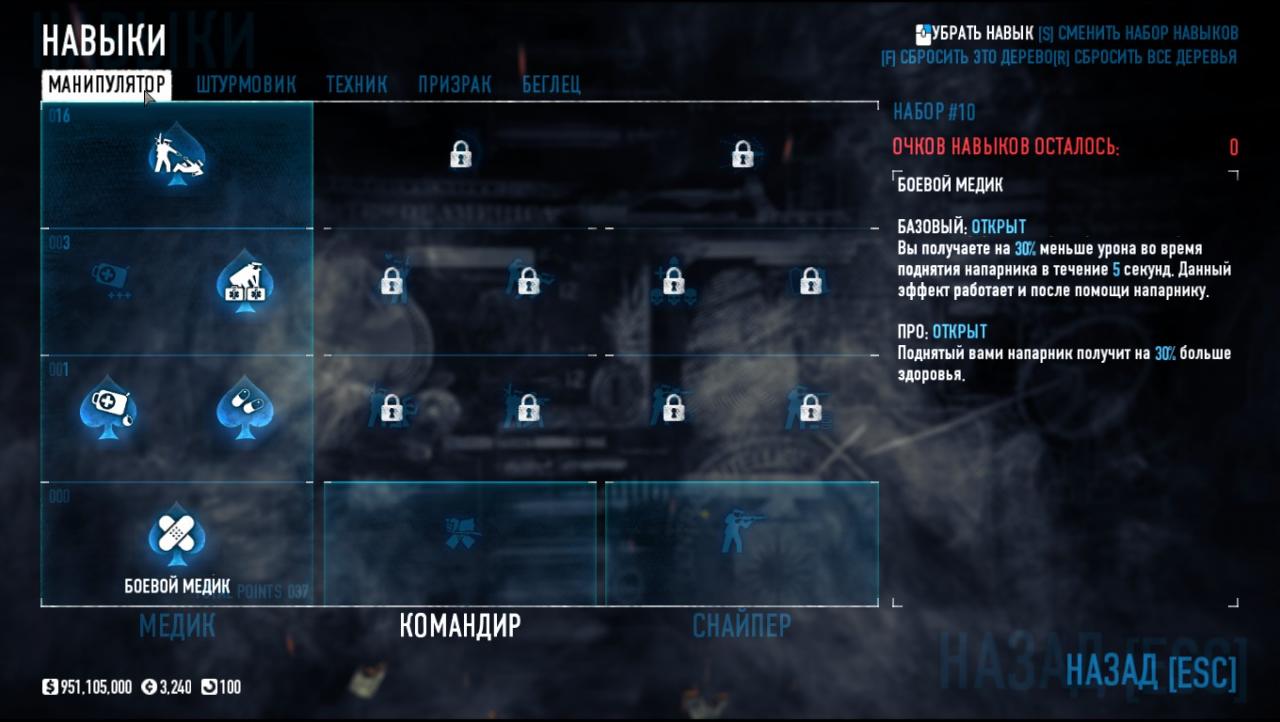 Combat Medic : PRO you get on 30% less damage while picking up a partner for 5 seconds. This effect works even after helping a partner. Here I myself did not understand what it means. “This effect also works after helping a partner.”.The partner you raised will receive 30% more health. If your teammate is not an anarchist with BLM, then you can help him.
Painkillers: ABOUT Companions, raised by you, get on 30% less damage during 5 seconds. Healthy, because this is a support build and you have to give resists., raised by you, get another 50% less damage. In total, the partner receives 80% less damage during 5 seconds, very helpful.
Ambulance:PRO Increases the speed for placing first aid kits and medical bags by 50%., increases the chance of survival. Team members, who used your first aid kits or medical bag, will receive on 10% less damage during 120 seconds (works for you too). By adding the effect of Painkillers, you can get 90% damage resist.
Combat Doctor : PRO Allows you to install 2 medical bags instead of one. Not bad already, Yes? Gives your medical bags a 2 additional use. 1 pharmacy – 4 use, hence, 2 pharmacies – 8 uses
Inspiration : PRO You raise your partners faster by 100%. Shouting at them will increase their reload and movement speed by 20% during 10 seconds. The buff for raising allies with handles is already useful, and the buff on reload and movement speed is useful though, but it is very difficult to give it. You can raise a partner with a probability 100%, shouting at him in 9 meter radius. The skill is triggered once every 20 seconds. You don't even need to say anything here, must have in support build.
Stormtrooper. 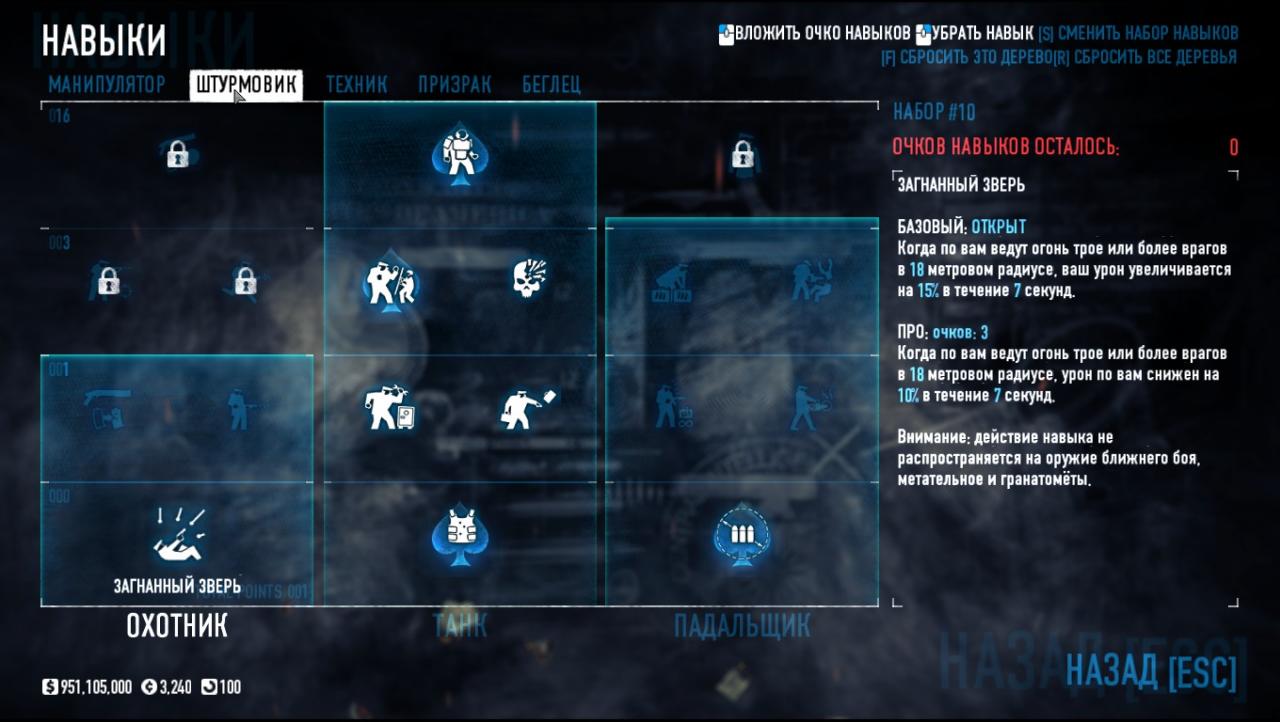 Anderdog:BASE When three or more enemies are firing at you in 18 meter radius, your damage increases by 15% during 7 seconds. Damage buff only to you, but still useful.
Persistence : PRO Your armor is restored to 15% faster. Not too important. Reduces the duration of the flash grenade's blinding effect by 75%. Very helpful.
Transporter:BASIC Allows you to throw bags on 50% further.Very useful because you – support
Toughie : BASE Damage you take reduced by 50%, if you interact with any object. Very useful when fixing a drill,hacking, and other actions.
Accurate shooter : BASE you restore 5 units of armor for each kill in the head. The skill is triggered only once per 2 seconds. Yes, he is useful, but there is no point in taking ace.
Shock and trembling : ABM Increases the speed of armor recovery for you and your partners by 25%.
The armor regeneration buff is very useful for you and your teammates. When shooting at the shield, you have a chance to throw it back. The more damage your weapon has, the higher the chance. The chance to knock the shield back when using a melee weapon is 100%.
Very helpful, because the machine gun is taken on the first slot.
iron Man : ABM Armor increased by 30%., because you have ictv. Allows you to equip the Advanced Combined Tactical Body Armor. Well, it's clear here.
Scavenger :PRO Radius, from which you can pick up cartridges increased by 50%. Very important for a sharper. Every sixth enemy killed leaves behind an additional box of ammo. Also very important for a sharpie.
Technician. 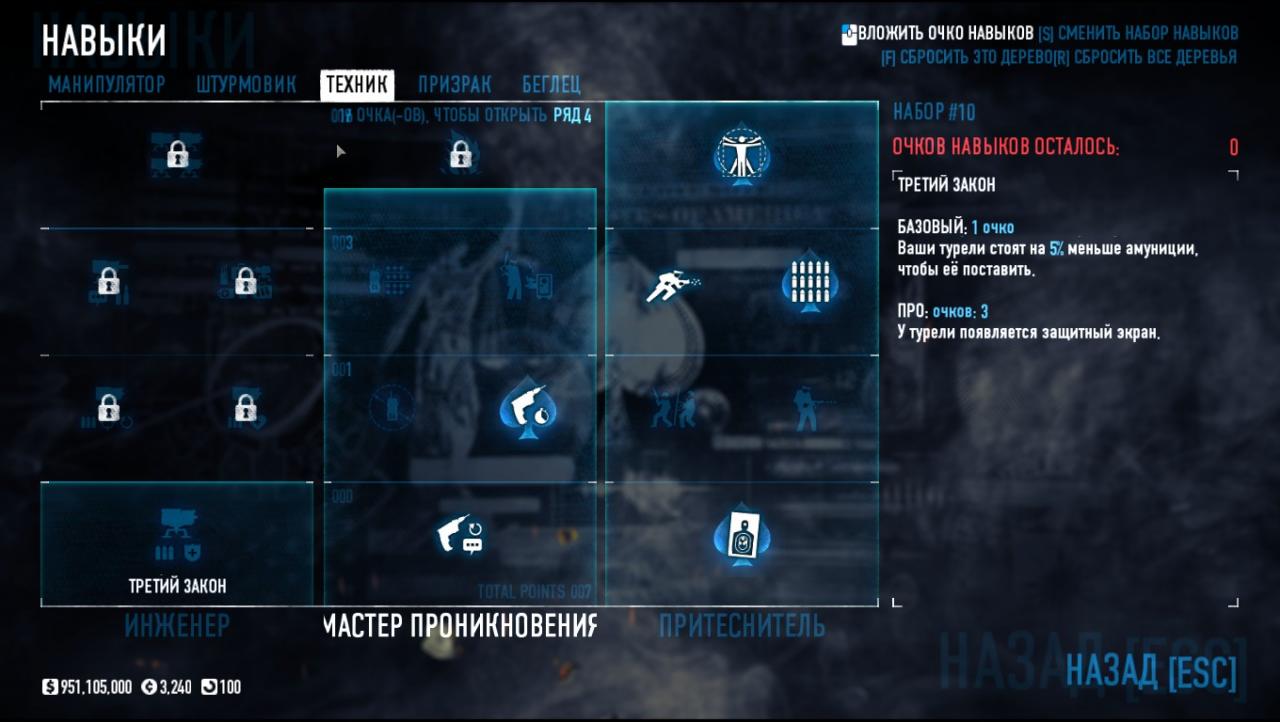 Technician Expert: BASIC You repair the drill and saw on 25% faster. Reduces time, needed to set mines on 20%. Your saw and drill are silent. Civilians and guards should see them, to raise the alarm. Only a buff on 25% drill fix
Captain Drill: PRO Increases the efficiency of your saw and drill, making them on 15% faster. Useful buff. Increases saw and drill efficiency for even more 15%. In total comes out 30% drill acceleration.
Dead grip : ABM your weapon is more accurate on 8 units. Your weapon is more stable at 16 units. I don't even need to say anything.
Heavy fire : ABM your submachine guns, machine guns and assault rifles receive an increase in the form 15 cartridges in the store. This skill does not work with the PRO version of the skill “Weapons for battle” Not very important, taken for PRO version. Your weapon gains the ability to penetrate enemy armor. It's already quite useful.
Weapons for battle : BASIC Shooting on the run: you can shoot from the hip while running. does not really affect the game, taken for surgical accuracy.
Surgical precision : ABM Headshot Multiplier is applied to the enemy's body with an effectiveness of 30%. This skill only works with SMGs, machine guns and assault rifles in automatic firing mode. The base is useless, taken for PRO version. Now the percentage is increased to 90%. This is now a very useful skill..
Ghost 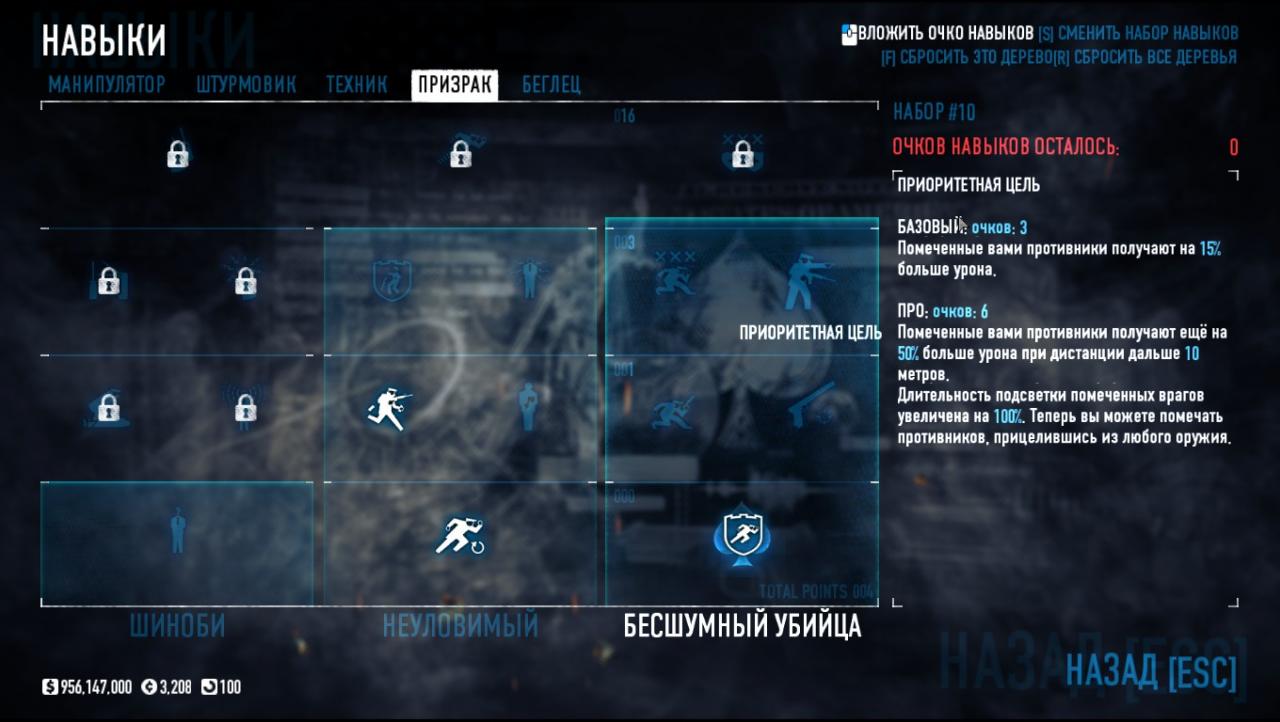 Duck down and cover up : BASIC Decreases the time before the start of stamina regeneration by 25% and increases the speed of its recovery by 25%. Increases running speed by 25%.- for running speed.
Parkour : BASE Your movement speed is increased by 10%. Climbing ladder speed increased by 20%..
Second wind : BASE When you lose your armor during combat, your movement speed is increased by 30% during 5 seconds. Let me explain why on the screen there is an ace, I was wrong with that because almost everyone has this skill, take basic.
Fugitive
The screenshot will not be due to the fact that the guide is being finalized later 2 of the year
Nine lives:ABM allows you to fall more 1 time, vital
Buyan:BASE you get on 50% less damage in melee combat.
Lust for blood: BASE
Everytime, when you kill an enemy, damage from melee weapons will be increased by 100%, to a maximum of 1600%. Attention: damage boost works as long as, until you kill the enemy with melee weapons.
From Лёха Трусы