Double potions and how to use them.

good day, dear colleague!
I am writing to you with that, to communicate the customs of your village, and volume, how can you sell your skills for a higher price. I am attaching a copy of my badge., so there is no doubt, what, even if I am not a royal alchemist, but I more or less studied my business.

The first, what should be noted – price for potions, as you already know, determined by your reputation, therefore you will find out the exact prices yourself. I will just describe in more detail the phenomenon of the demand for double effects of potions..

Also attached to the letter is an illustration of my book of potions., opened on an arbitrary page. 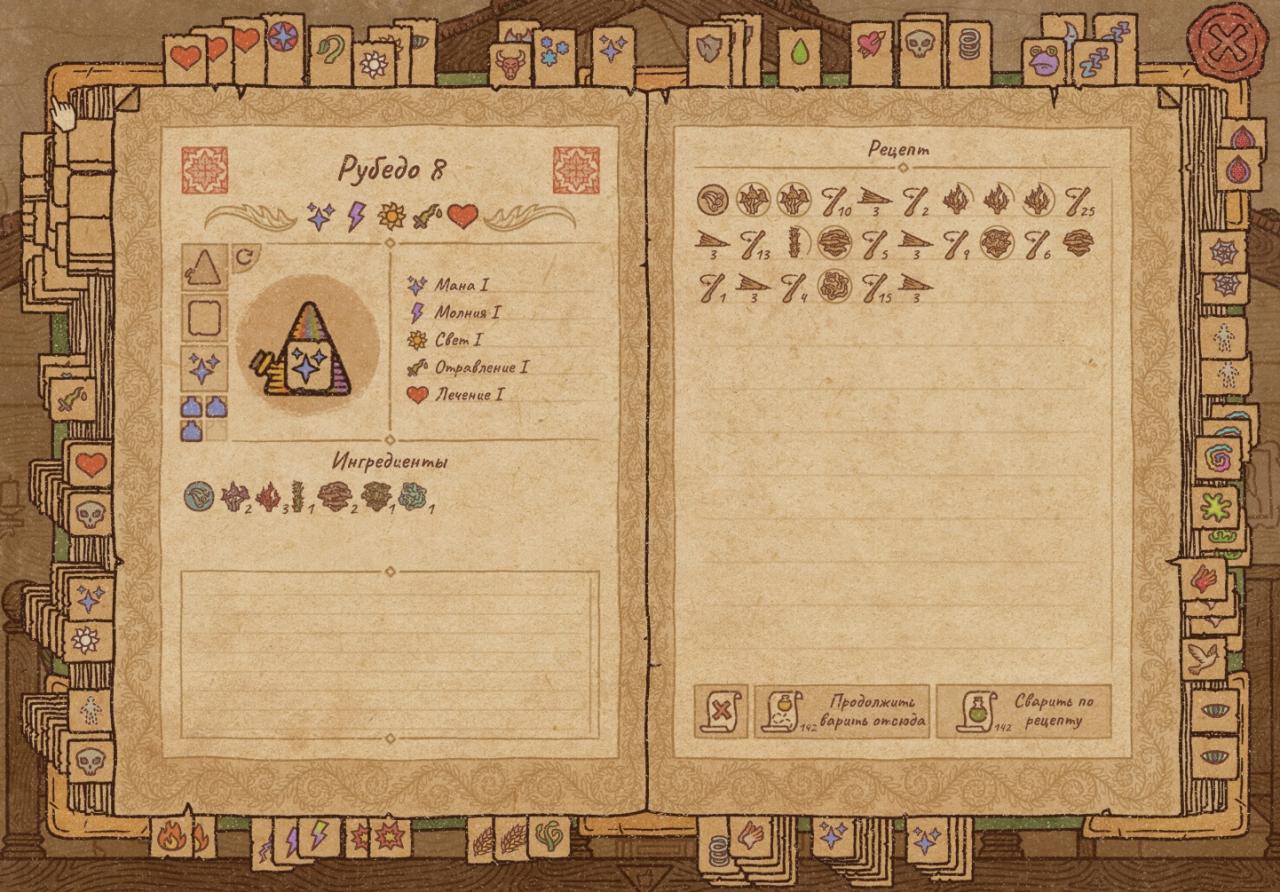 The origins of knowledge

In our culture, it is customary to do many things three times.: cast a seine into the sea, knock, offer your services… The latter is just about us. Alchemist – not a fortune teller (her house is usually closer to the forest), and if three times does not understand the needs of the buyer, will ask him to come next time.

Of course, the main meaning of the request is almost always easy to grasp: if they say “I need help with the wound” – does it need anything, curative, even the simplest potion of two green mushrooms or an ice fruit and a strange mushroom. Well, you know without me. If they speak directly – “give a throwing vial of acid”, why argue? But if they tell you “I want something fighting” or “I want to be mighty”, here you can get creative.

Here look: we have three attempts. The first and second are harmless, on the third they do not want to bargain with us, because they already took a lot of our time and are shy. People are polite today, honest. Which means, what if we know the obvious bottle, the first time you can suggest something else. Maybe it will work?

Take this respected robber as an example.: 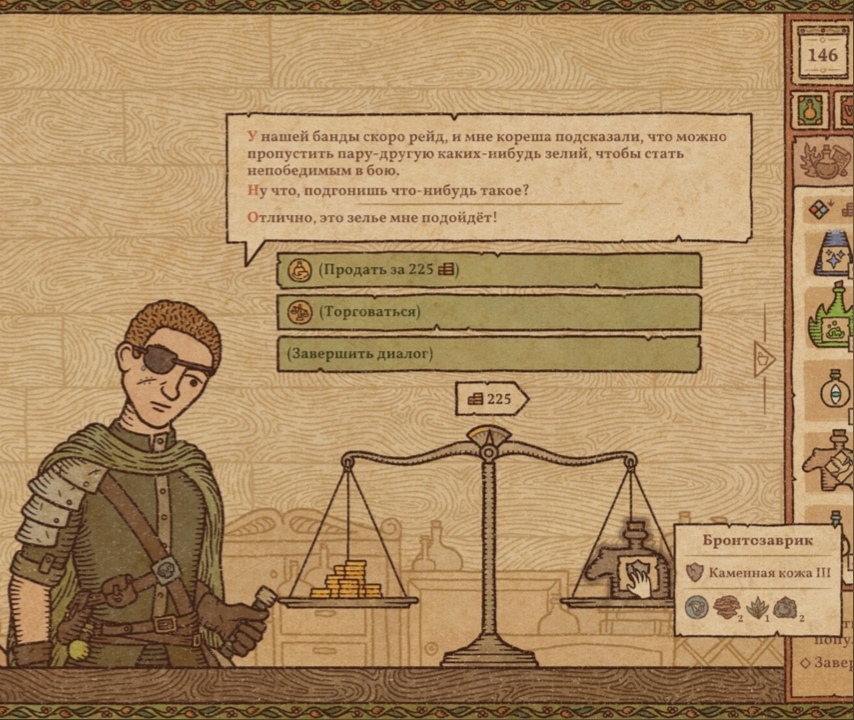 It, judging by his words, decided to go down the spines with my friends, and fears, that he might be attacked. Naturally, our first instinct – give him a potion of protection, right? And the truth, we understood each other well and he is glad to take him. But maybe, it will be more convenient for him to just collect the roots faster and run away? This requires hefty strength., and I offered him a tincture of the fury of our mountaineers: 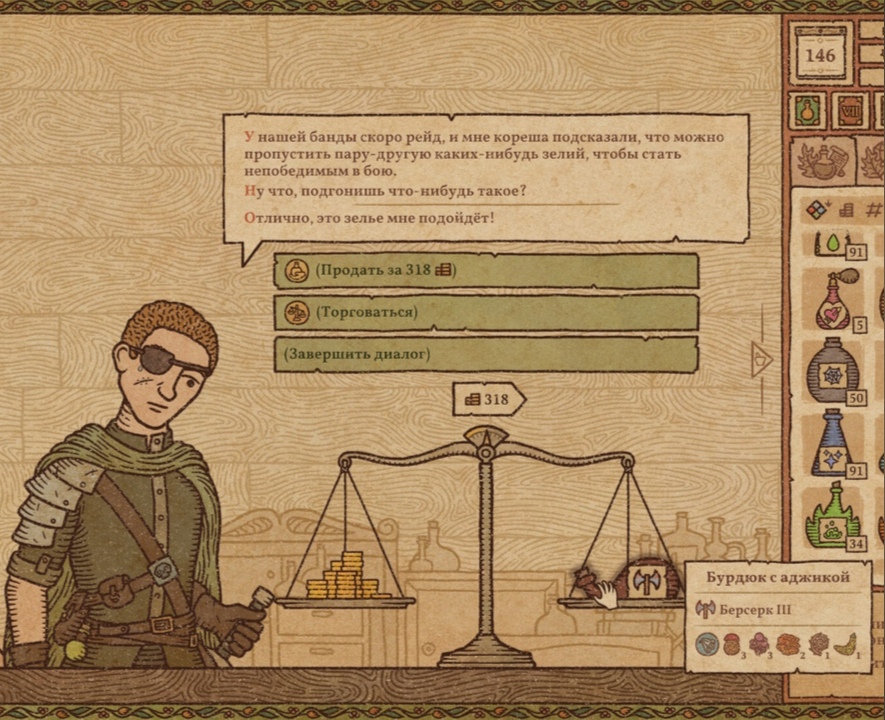 As it turned out, that's exactly what he wanted! I took the risk, but if he refused – I would just give him a potion of protection, bargained and let go in peace, but now I know, what does he need both of these effects.

We lay out our map of potions and begin to brew a wonderful ointment.. Bear in mind, what the further the effect on the map, the more expensive it is which means that only the last one should be endowed with full power, the most important effect! (but if that, the sixth sign of strength will replace the first, so you can brew such potions on the basis of already brewed three-digit)

In the meantime, I was writing this down, ointment boiled. Look at this young man's shocked face! 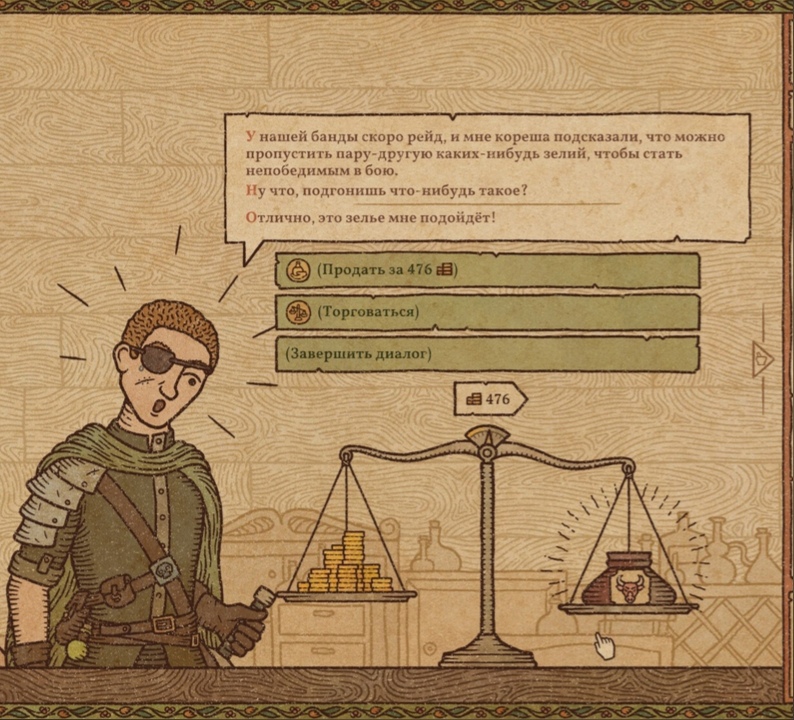 To-to, will know, who ordered the service! What amazed him so?

Double effect ointment! For each of them he was willing to pay, which means he will pay for both!

I did not come up with a special categorization, so I'll go through the book.
I'll make a reservation right away, what a set of herbs, past discounts and general taste preferences are different for everyone, because I see no point in telling, in what way and with herbs it is necessary to achieve the effect. I believe, that I am writing this to an equal colleague, who is able to determine the optimal way of preparing the drug.

All other potions are used to make salts., or too simple, to waste your time on them.