This guide is a collection of tips to make it easier to LEGALLY get the longest and most unpleasant achievements. – namely the activation of planets and probes – all other achievements are obtained “along the way” and do not require special consideration. (And the simplest “illegal” ways – use other people's saves or hack the game corny…)

To begin with, I will say that the more powerful your computer is – the more comfortable your game will be… it would seem logical, BUT the lower this bar, the higher the chance that the game will give you a nightmare in the form of a completely frozen computer, and this problem will arise over time! And even if you can easily start the game and boot into your first planet in seconds – the timer will start ticking… and this problem 2 causes.

1. Save file size – it is listed in the main menu and grows over time – my “low-powered” gaming laptop withstands save files up to 11+ mb(which equals approximately 60 hours of play) – in the community they say that saves from 20 not actually launched… I do not know, did not check, this is not my level… so here I can only advise you to hurry and not particularly “litter” if you want to get 100%.(Advice may be out of date, suddenly fixed, but take note because I had to because of this 4 replay the game from scratch, with huge breaks, and therefore updates between them)

2. Remove all video files from “RMB on the name of the game”-Control-View Local Files-Folders …ASTRONEERAstroContentMovies
No kidding. This seriously raised the bar for the first point and is not at all critical for the game itself.… you can watch the video yourself in the player(there is nothing special.)

The advice is simple – dig the planet not with a tool “dig”, but “smooth out”(hold down Ctrl while choosing a convenient angle for descent). So it is corny to dig faster and simplifies the subsequent repeated descent and ascent.

All that is decorated with red – we remove all the soil around the weed from the maximum available distance(some flowers shoot dynamite) and look at the explosion – we plant the seeds of each type of plant once(on achivku) and finally destroy – you don't need it.

Most unlockable recipes in the game – rubbish.

For example, I have never created an average truck in all the games. – difference in requirements with “huge” – insignificant, and many other items for the base are easier to find nearby, rather than craft… so inspect all technologies at once and select “maximum” reducing transitions to it to a minimum. For instance “maximum” in energy resources, this is a RTG for the base and a coal generator for activating the planets – wind and solar generators do not study in any variations, there are a lot of them around…(+you will receive mini-RTGs on quests like candy, which will be enough until the end…)

Essentially a list of essential items – the largest FLAT platforms for each printer, maximally large Storages(Batteries, barn, canisters), Tractor and its trailer(not buggy), medium or large shuttle, Extractive and synthesizing constructions, shuttle hydrazine engine, shredders(strive for the greatest), exchange and event platform, dynamite, packer, lift and personal oxygen generator(we wear 2 mini RTG in your pocket and forget about the oxygen leash forever)… and all! Everything else is junk for entertainment and “automation”.

Resources – they are nearby and they are NOT NECESSARY.
Kidding… Needed… A little… But they are really very close and on every planet you can find everything you need in 50-100 meters from the landing site(or under it, but deeper… but you still have to dig deeper)! So there is no real need for “research” planets… and you only need 5-6 units “characteristic” for every planet of metals and 20-30 gas units(4-6 cans) – find, digging or condensing, we return to the main base – and strive to create, first of all, a shredder and an exchange platform – and already from them to receive virtually an infinite amount of the resources you need without leaving the place, recycling and exchanging the trash around you.

(In fact, all the resources needed to complete the game are on one piece of the screenshot… EXO chips and gases lie in a barn on the other end of the base…)Also, with the exception of organic matter and quartz, everything “raw” resources are better processed immediately in the smelter, and only then store – raw this is their only production route(raw resources can still be opened “pyramids” with research materials, but these same materials and without the pyramids will be enough for you in abundance)
Activating planets.
A little bit later… After gaining access to all the required technologies, metals and gases must be 1 special quest chain – “Vertical thinking”
We organize transport on Vesania, given its landscape, a Tractor with 1 trailer, a laden barn with the resources necessary for the quest:4 EXO-chip and on 2 pieces of each material – graphite, titanium, tungsten, full cans of hydrogen and nitrogen, silicone and tungsten carbide

We move on the compass to the quest mark(blue icon in the distance) and fulfill its conditions.

For completing a series of quests, we get the fastest and most all-terrain vehicle in the game – VTOL(or VTOL, whatever these letters mean…)
Then we return to the planetary “base” and getting ready for…

Activating planets!
And probes! Each planet has 1 probe and to find them you need 1 steel… more precisely 1 probe scanner, made from 1 become.
We do 7 pieces and load into the barn.
We also store carbon and hydrazine in a container as fuel.
1 VTOL and 6 packers.
Lots of resin(It is not necessary to carry with you, just consider what you need 3 pieces per planet, for printing flat platforms).
1 large warehouse.
4 coal generator.
One lift.
Everything…Next, we make the following structure and fly on the compass to the nearest power center(Purple dot on the compass.) 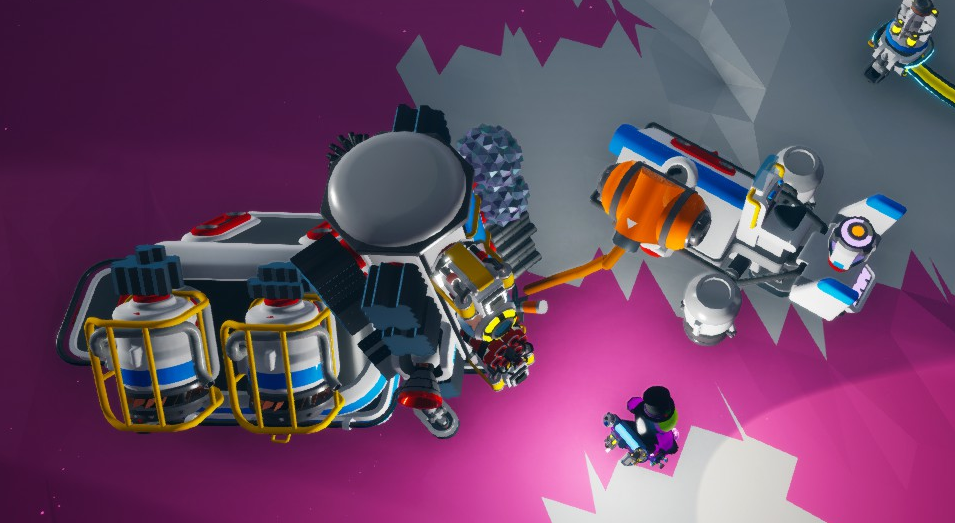 (The number of generators depends on the activated planet)
(If it is not clear how to unhook the flat platform from the ground – vacuum cleaner add a pinch of dirt under it, will instantly come off.)

Flew? Look around for any dangerous flora and sit directly on the knot. In parallel, we equip one probe scanner per active cell in a backpack(lateral “horns” in the backpack, they can be turned on / off with a hotkey, I usually keep an oxygen generator on one, although they are most often used for a jetpack) and at each stop we check where he is – sooner or later he'll be on his way.
We detach the platform from the cable, connect it to the outlet and turn on the generators.
Powering up the node, turn off generators, catch the cable, detach the platform from the ground and fly further… until we activate everything.

Three or four cans of hydrazine for VTOL are usually enough to activate all nodes on one planet. 2-3 carbon generator(the main thing is not to forget to turn them off)

When you find a probe, you sometimes need to dig it up(to find a slot on it) and insert the scanner into this slot. BUT! Be careful when activating the latter., 7save in your car in advance and get ready to work quickly with a vacuum cleaner – since when activated it will create “fault” in which one of those videos should be played – we must go to the rift and “to interact” with him(F key) – and with all this a lot of problems – I had to 3 restart the save to get an achievement, for a rift exists 30 seconds and for me it was at a decent height(had to work with the ground), and then it turned out that the button for interaction does not appear on its own – and you must actually blindly click it next to the fault…

You can dig into the center of the planet and activate the core(we take TWO resources necessary for the core, we create in the very core from these resources 2 multifaceted bullshit and insert one into the core itself, and we are taking the second by shuttle to “unidentified satellite”, once, after activating the second core through it, you can immediately teleport to this very satellite, leave the polyhedron and teleport back)

You can deal with nodes and probes first, and then excavation…

Do all sorts of nonsense like events, construction, multiplayer and other…

I advise you to start activating energy nodes with Attrox and when flying to the next planet “unload” from unnecessary generators, resources and other…

Dezolo and Novus – satellites, they are smaller in size and only 2 energy center, there are six of them on planets… 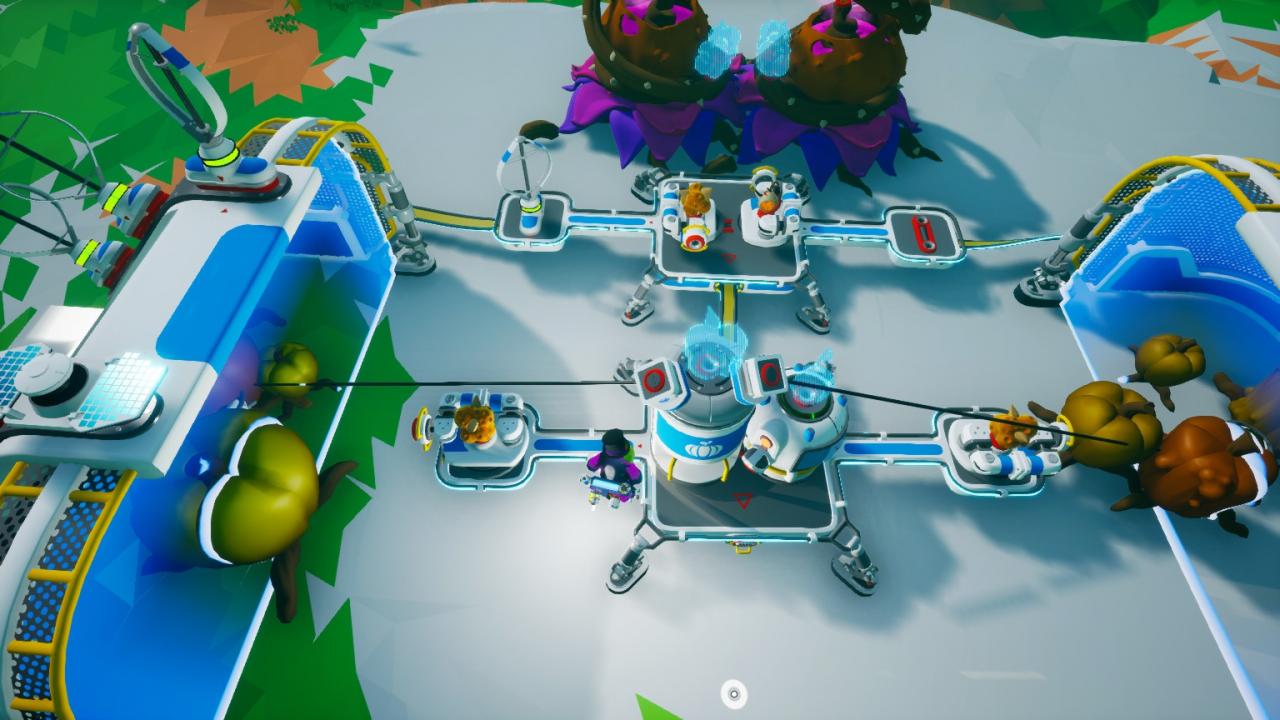 “Football gates” stand so that the seeds and pulp do not scatter, in a group of pumpkins(5-6 PC) put “Proximity module” and is brought to it “Warehouse sensor”(with EMPTY / NOT EMPTY mode) connected to the pulp barrel(put under “release”)

Of the design minuses, only:
Requires the presence of a player nearby(I advise you to turn off the release of pulp from the barrel if you need to leave the base)
Astronium of purple pumpkins interferes with planting seeds
Sometimes seeds and pulp fly out of the work area… which requires manual correction.

But in general, the design is simple and works. – event closes quickly.