In this manual, the method of obtaining 100% achievements (platinum), everything in the game 49 achievements.

This guide covers 49 achievements, currently available for the multiplayer part of Halo Infinite, and the rest 70 achievements will be available with the release of the story 8 December. Achievement can be divided into several categories:

In the next few years, more achievements will be added, so I will update this guide whenever possible.

If you are looking for a specific achievement, then you can search the manual with:

📖Description of the game📖 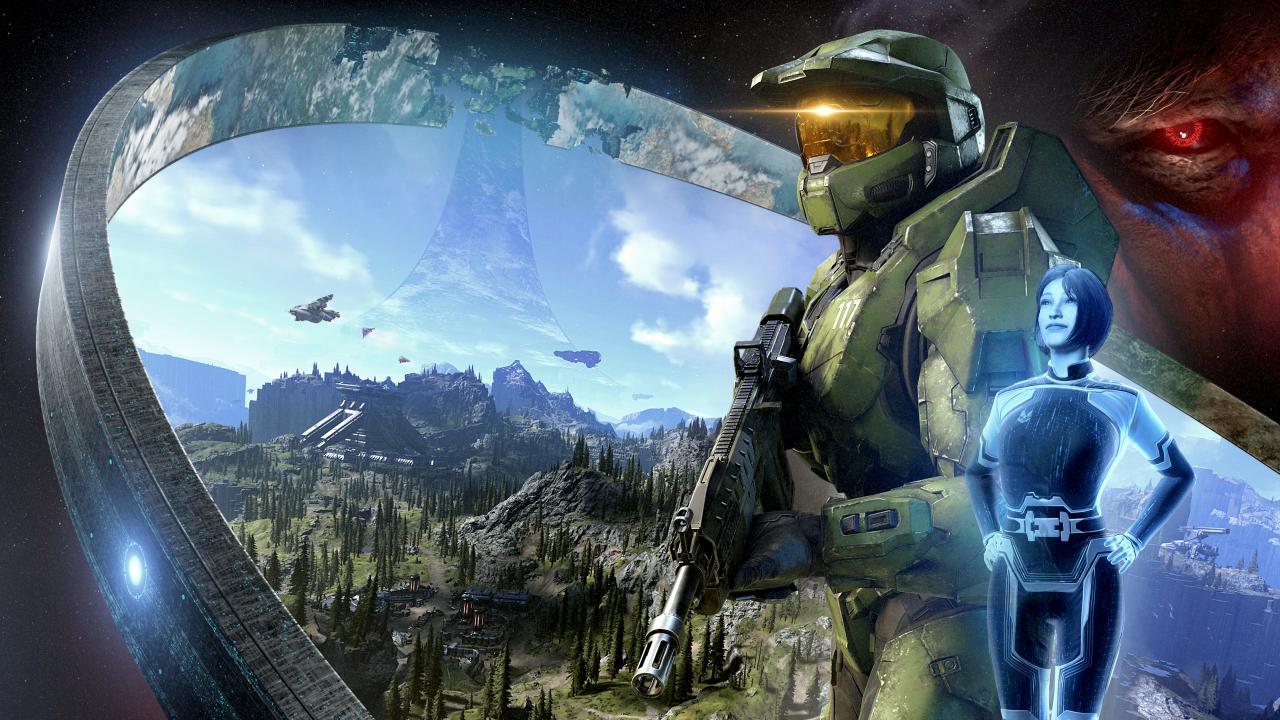 The last ray of hope has faded, humanity is on the brink of death, and the Master Chief is ready to fight the most dangerous enemy of his life. Don the armor of the greatest hero in human history and embark on an epic journey through the gigantic ring world. Purchase Halo Infinite to launch the campaign. (campaign)».

Halo goes back to basics: equal conditions for all participants, equipment scattered across the map and 4 players - the recipe for the perfect arena battle.

Experience an endless variety of combat options, which is revealed thanks to combinations of dozens of weapons, equipment and equipment. Feel the madness of big team battles, unleashing the full potential of the Halo sandbox.

PERSONALIZATION OF THE SPARTAN

Use an advanced personalization system, to create your own unique Spartan. Earn and get new decorations for completing the campaign and playing online. Get even more decorations, by purchasing a Battle Pass with an unlimited validity period and unlock new items at your own pace.

A new era of Halo has begun! Celebrating 20th anniversary of the series, Xbox and PC players get free access to the Halo Infinite multiplayer beta. Step into the path of the Spartan today in Heroes of the Reach Season 1 and stay tuned for news on temporary in-game events and exclusive rewards. Halo Infinite Campaign Available to Pre-Order and Coming 8 December.

The last ray of hope has faded, humanity is on the brink of death, and the Master Chief is ready to fight the most dangerous enemy of his life. Don the armor of the greatest hero in human history and embark on an epic journey through the gigantic ring world.

Halo Infinite offers the largest and most action-packed campaign ever in the series. Events unfold on the huge ancient halo of Zeta. Explore the vastness of the Installation 07 - from majestic mountain peaks to mysterious structures in the bowels of the ring world. Rescue the UNSC Marines, to join the ranks of allies, who will help you in the war against the formidable Exiles.

The game begins after the events of Halo 5. After suffering a crushing defeat, UNSC fleet ships crash to the surface of severely damaged Installation 07. The wreckage and the shattered ring world now belong to the Bloodthirsty Outlaw Warriors. Despite the enemy's superiority in manpower and equipment, The Master Chief must stop the Exiles from regaining their halo and taking over the greatest weapon in the galaxy..

Stocking up on popcorn

Watch the clip in the theater.

In the main menu, go to the section Community Theater My match history Choose a match your achievement!!!

Change any parameter of the training mode.

Pause the game in training mode and change any option.

Complete any weapon exercise. In the Academy section of the main menu.

Do your thing Complete the tutorial.

The Two of Us Get Access to Your Personal AI.

Fashion fever
Put on new armor for personalization.
Change the color of your armor.

Change of image
Change the look of your Spartan in the appearance menu.
Change your body type.

Need a weapon?
Try a new weapon customization item.
Change one of the skins to weapons.

Ready for service
Change the Spartan tag.
Change any character in the tag.

So which of us two is a car?
Find and use a new AI.
Change your avatar.

This thing on the left is a brake
Test drive the new tech personalization.
Change vehicle equipment.

Own rules
Play your game.
Just load the custom game from the main menu, and then “Finish the game”. The achievement will be unlocked after that..
Game type

Bouncers
Kill 3 enemies with the ball in a Matchmaking Game of Ball Hold.
Play in mode “Ball hold” with the selection of players. Hold the ball in your hands and commit 3 melee kills. The ball does not kill with one hit. (if a, the enemy is low on health, you can kill with 1 blow). In the usual case 2 hitting a healthy opponent (Easiest to do with a friend, as a teammate can help and protect you and weaken enemies).

Natural voids
Access the treasure cave in a matchmaking game.
Use your personal AI during the match (Artificial Intelligence), to take “mining cave”.

District ranger
Grab 5 zones in the game "Positions" with the selection of players.
For one game, grabbing 5 zones.

Station wagon racer
Use 4 different vehicles in a matchmaking game.
This must be done in one game and requires the use of 4 various vehicles. Vehicles include: Mongoose, Warthog, Banshi, Ghost, Helicopter, Scorpion, Razor, Wasp, Shadow Tower, etc. I recommend doing this in the Big Team Battle mode..

Running in a circle
Capture the flag twice in Capture the Flag Matchmaking.
Grab 2 flag in one CTF game. It shouldn't be too hard, if you focus on promoting the enemy flag and you have a decent team. Can be earned in CTF Grand Team Battle or 4 on 4 CTF.

Straight to the bank
Deliver 5 energetic in the game "Reserve" with the selection of players.
Reserve – this is a game mode in a big team battle, in which you must collect “energy grains” (burn like fusion batteries) and deliver to your base. To win, your team needs to score a total of 15 glasses. We deliver 5 of them in one game and your achievement!!!
Note: The enemy team can steal “energy grain” from your base, so you may need more than 15!

Control Fanatic
Assist in capturing all zones, for which points are given, in the game "Full control" with matchmaking.
Just grab everything 3 points (BUT, IN, FROM), to dial one of 3 glasses, necessary to win.

MEDICA HERE!
Revive 3 allies in the round of "Annihilation" with matchmaking.

One shot to the top center
Tag an enemy in the "top center" in a matchmaking game.

Meat grinder
Kill an enemy melee with a bladed weapon in a matchmaking game.

Fourth degree burn
Kill an enemy with a Ravager shot in a matchmaking game.
During use “Ravager” you can hold fire mode, to fully accumulate a lethal shot. This shot leaves def. interaction area on the floor. Accumulate a charge and shoot it to the floor. We wait, until the enemy comes into contact with the area of ​​action, as soon as he dies – then your achievement!!!.

Chop-chop
Get Bonus "In a Cake", using a Bugai Chopper in a matchmaking game.
Driving Bugaisim “Chopper”, invade and kill the enemy, to earn a medal “Into a cake”.
INSERT PICTURE WITH CHOPPER!!!

Party on wheels
Complete the Aboard Achievement, using Chopper in a matchmaking game.

With the wind
Observe an ally, managing "Vepr" or "Chopper" in a matchmaking game.
Once you die in a multiplayer game (on the map and in the mode, where are the vehicles), you can watch allies of the team. the main thing, to have an ally in the car “Boar” go “Cutter”. You need to watch him for a whole second.)

Remote work
Take your weapon, using the grappling hook in a matchmaking game.
Quite an easy achievement. Please select “hook” in your consumable settings panel. With a hook, raise your weapon on the floor and take it in your hands and your achievement!!!

Return to base
Throw a grenade back at an enemy with a pusher in a matchmaking game.
“Pusher” (Repulsor) – this is a useful piece of equipment in Halo Infinite. The pusher can be used during combat. In a short time of use, the Pusher can launch objects and repel projectiles (Can be attributed, vehicles, rockets, plasma gun, grenades and even other players).

More fraternal
Throw away heavy weapons for an ally in a matchmaking game.
To do this, you must first assign the weapon reset button in the control menu (since by default there is no key binding in the settings). Then, a bowl in the hands of a heavy weapon (Sniper rifle, etc.) drop it and ask a teammate to pick it up.

Zanachka
Place an item in the Cleaver Vault in a matchmaking game.
In a jeep “Boar” behind, there are luggage racks and you can put weapons in it and even “energy-grained”. Put one of your items in the trunk and your achievement!!!

New guy on the block
Earn Perfect Kill, using VK78 Commando in a matchmaking game.
Medal for “perfect kill”, awarded, when a player kills an enemy with three shots from the VK78 Commando without missing.

Hook to the sky
Capture flying enemy vehicles, using the grappling hook in a matchmaking game.
Using the Grappling Hook (found on equipment spawns), to capture an enemy aircraft (AV-49 Osu or Banshee), and then grab their vehicle for a medal “Invader”.

It is fraught
Call the "Chain Reaction", using an electric rifle in a matchmaking game.
To earn a medal “Chain reaction”, you must kill the enemy with a shock chain. When using a Electric Rifle, it deals damage to nearby enemy players, and you must get murder from this chain reaction.

Enemies are everywhere!
Simultaneously mark 3 and more enemies in a matchmaking game.
Threat sensor (Threat Sensor) – this is a useful equipment in Halo Infinite. Players can place the device on any surface. The device then periodically pulsates and highlights enemies in red on the screen. Enemies are highlighted, even if they are hidden behind the wall.

Kills with style
Earn a Mythic Medal in Matchmaking Game.

It's all about hard work
Completed Ranked Matches.

By the hour
Complete a daily challenge.
Just complete the Daily Quest. It's very simple.

There is work for you
Complete a weekly challenge.
Complete one of the weekly quests. Still very easy.

From JON WAITER and $WAUTER$