7 December 2021 Years of development Long Dark rolled out a new update. The Black Stone card has been added to the game, and with it a new model of behavior for a pack of forest wolves. We've already met the Timber Wolves in Pale Bay. but, now they have become more dangerous, smarter and smarter.
What has changed and how to survive, bumping into a pack of forest wolves, exploring the surroundings of the prison? (Map and wolves studied, starting a new survival level Stalker. I did not use weapons against wolves) 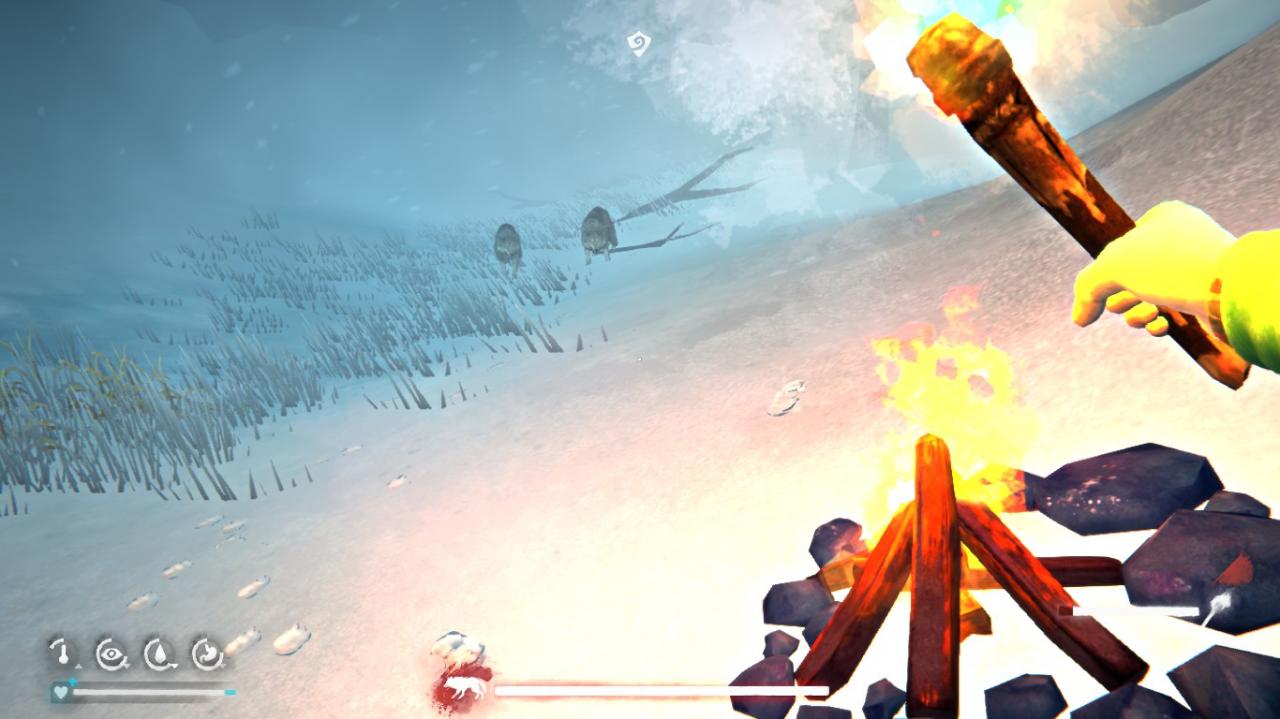 What has changed in the behavior of the pack

• The number of wolves in the pack has doubled. Now six starving animals will strive to eat you
• Wolves have become exactly a pack. They exhibit gregarious behavior.. They are afraid to attack alone. Meeting no resistance from your side, the pack grows bolder and attacks more confidently. After the first bite of one of the pack, the rest of the wolves are bolder and try and bite more often. Something like - take a long time, looking for slack, finding slack, attack together and bite one by one, and at the end everything is all at once. The same room. Together strength.
• Alone, forest wolves are now very cowardly creatures. They will whine, run away and avoid you in every possible way, if they stumble upon you far from the pack
• The leader of the pack howls, calling all the wolves to attack. A couple more wolves pick up the howl. At the end of the howl, the attack gauge of wolves is activated, and the whole flock runs to you in unison. (possibly, the leader of the pack begins to howl, maybe just a random wolf, but it seems that the developers laid down exactly the behavior of the alpha male for one of the wolves). So we heard the howl of the forest wolf, it's howling for you. 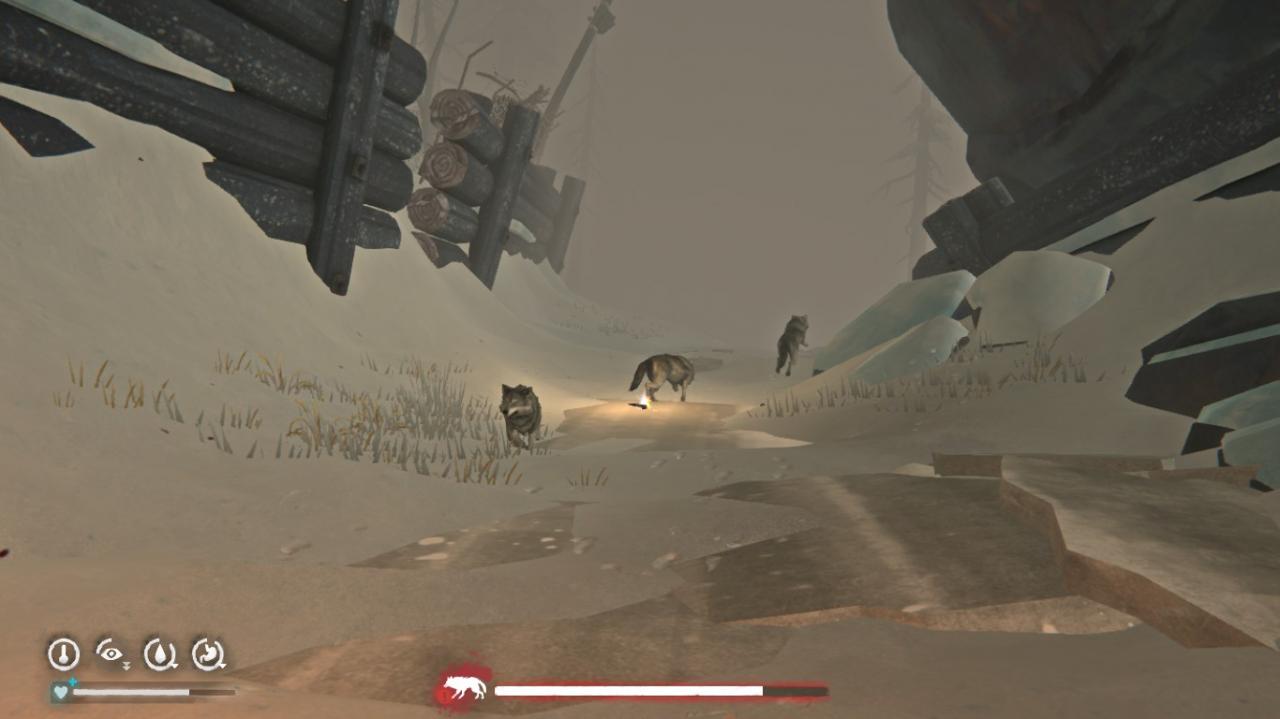 • Defenseless player. Wolves will attack a defenseless player directly and amicably. They are not afraid of you, feel their strength, attack from all sides, including attacking from the front. After being bitten by the leader, the rest of the pack joins the attack. Won't try to run away, gnaw very quickly and very amicably.
• Player with a torch in hand. Light a torch or falsifier. Forest wolves are afraid of fire, and this will change the model of their behavior. Now they prefer to stay away from you. The wolves began to fear you, more often they run away, not daring to attack. Now they attack on two occasions. 1) From the back. So spin more often, and you can frighten the approaching wolves with fire in your hand. 2) Only one or two wolves (leader?) will wait and growl, looking for slack. Get close enough, they will attack. Throw a torch at them and fall, run away. 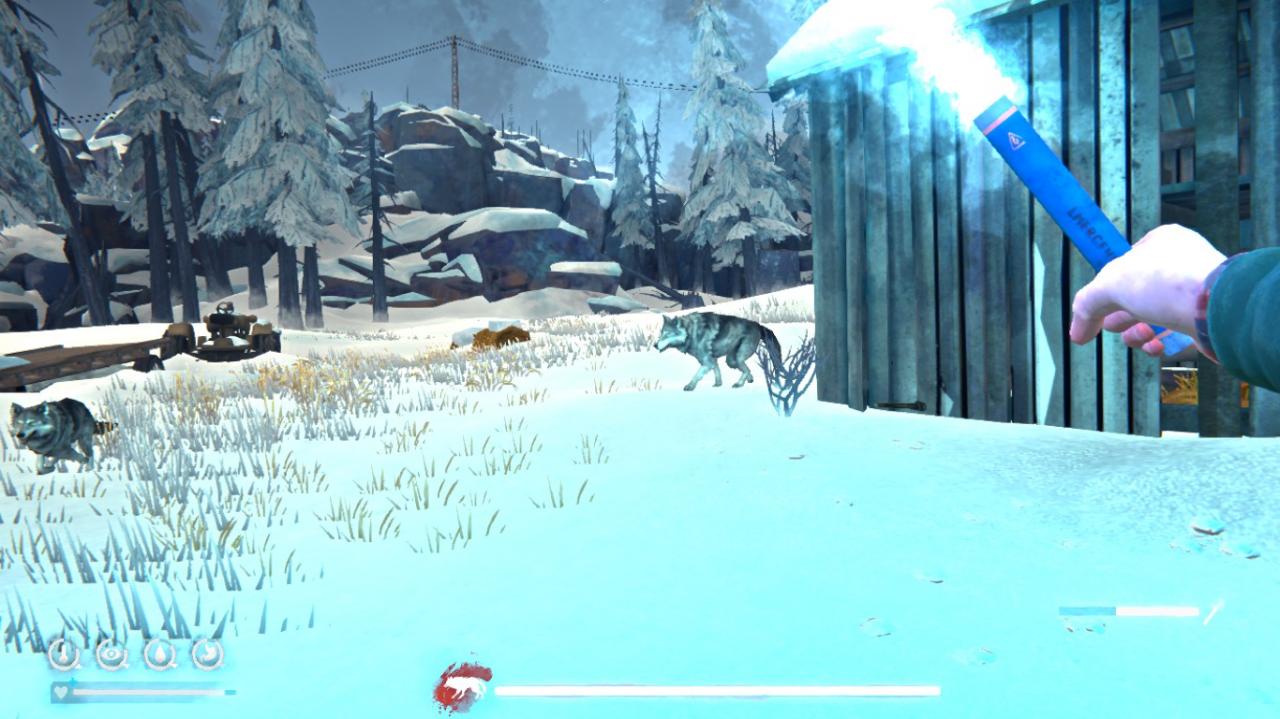 • A torch hit exactly in the wolf's face takes away from the attack scale about 10%. False fire a little more. However, the afterburning falsefire seems to do less damage., or doesn't scare at all. (Threw a firefire at the snarling wolf that was burnt on 80%, hit in the face, however the wolf did not run away, but attacked me)
• During the attack, forest wolves sometimes switch to deer and rabbits, sometimes run through them, not noticing and not reacting to each other
• Bonfire keeps wolves at a distance. If you stand by the fire, wolves won't attack. If you go to sleep by the fire during the attack, then a couple of bites per hour are provided for you. 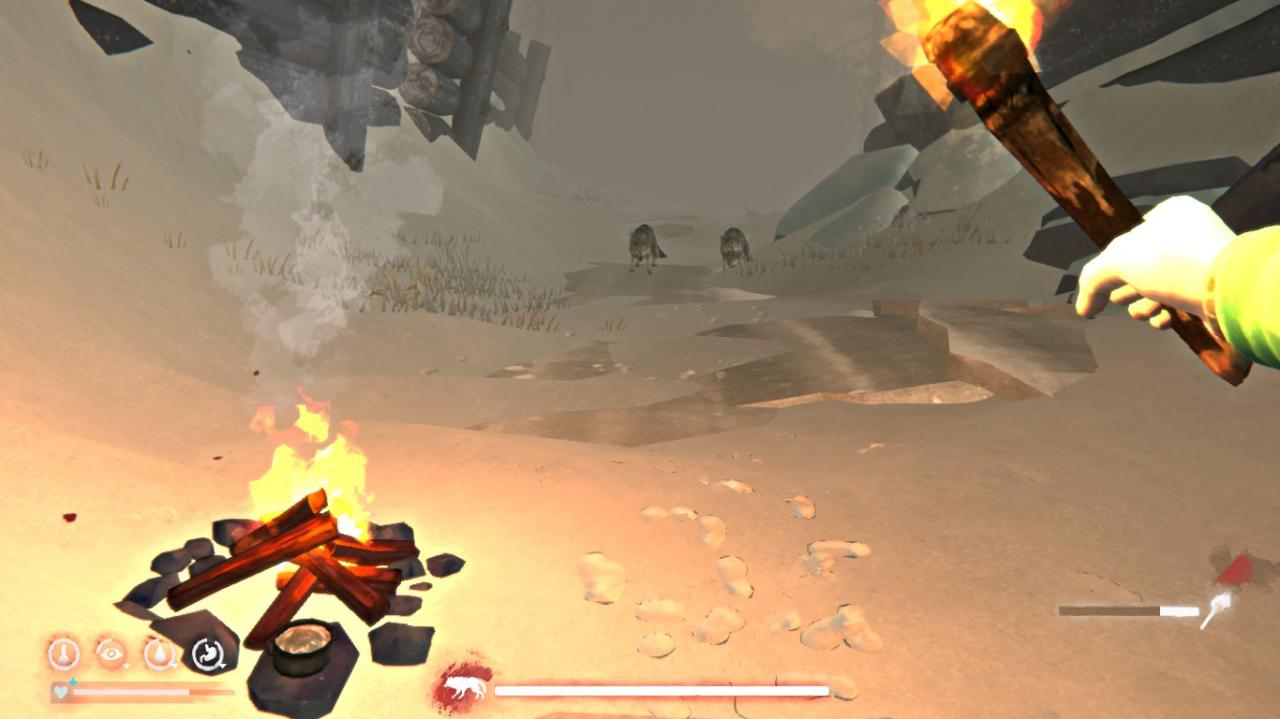 • Obstacles like bridges, ledges with vines stop the wolves. They won't be able to chase you. Bridges also cut off the attack, and the scale disappears.
• Hid from the pack chasing you in a trailer or room, booting through the door? Will be heard, how the flock fiddles on the other side of the door. The door periodically shakes. If you quit now, you will come across a flock. If you wait an hour or sleep, then despite the growl and rumble of the door, you can go out. The flock is gone.
• After that, how did you fight off the attack of the wolves, three scenarios are possible. The flock will become more afraid of you and will run away more often.. The flock may attack you again. Either split, and then two or three wolves will attack. Or it will attack again in full flock. Anyway, immediately after the end of the fight, wolves are afraid of you, you can run through them. 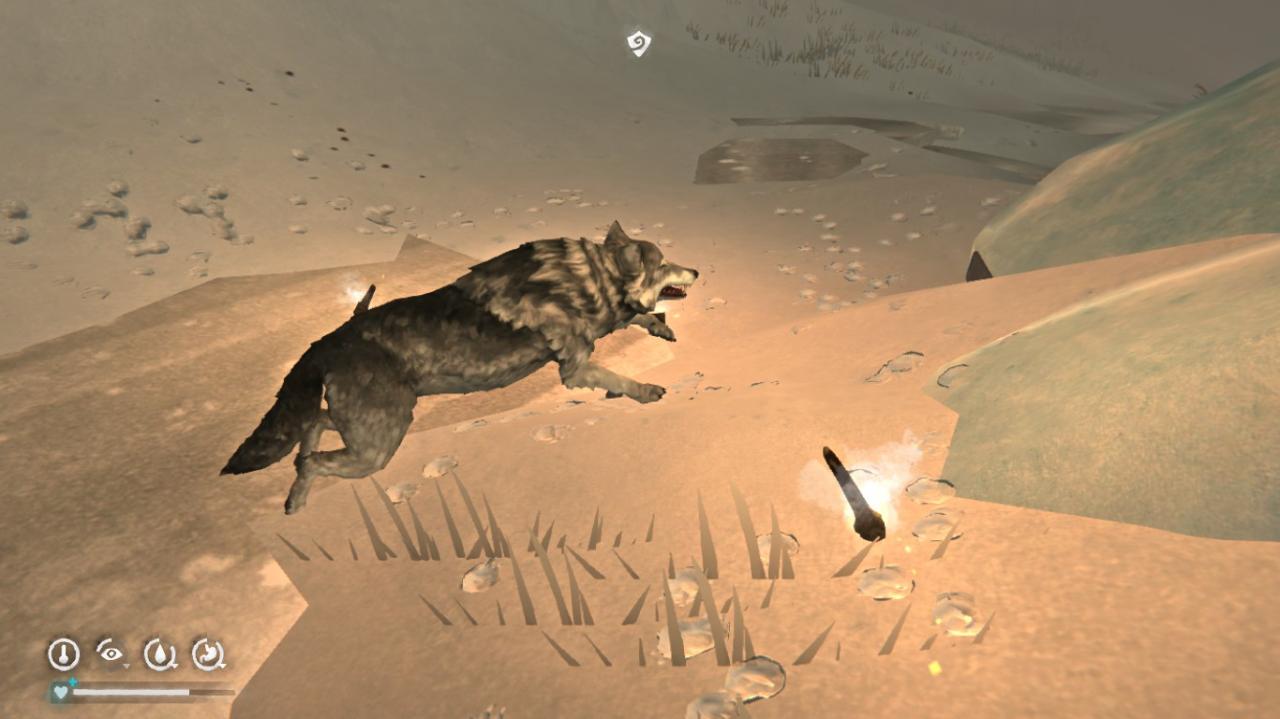 How to survive without weapons

1. Escape tactics. Run to the nearest room, to the bridge, ledge with vines, climbing rope. Will work, if it is close to a safe place and you can run at a time. Won't work, if you don't get there. Exhausted, you will become an even more desirable target for the pack. Get hurt, and seriously.

2. Retreat tactic. Light a torch or falsifier. Now the wolves will stay away from you, attack less actively, and bite only from the back or if you break the border of a roaring wolf. Go your way, turning fire to the running wolves. Marine firefire goes out very quickly, you won't go far with him. Generally, very similar, that you can go anywhere like that. If the nerves are steel.

3. Fight Tactics. Light a fire and more. Pull torches from the fire and throw them at the approaching wolves. Don't turn your back on the wolves. Don't get too close, so as not to provoke a wolf attack. Ideally, find a place by the cliff (walls) or with natural obstacles, to make it harder for the wolves to attack you. Torch Thrown at the Wolf's Face, can do double or even triple damage, while the wolf tries to escape between obstacles or re-contact with the torch. This is the most effective and safest tactic.. Can be used after the start of a flock attack, and lighting a fire in advance and deliberately provoking an attack, to clear the passage of the flock. 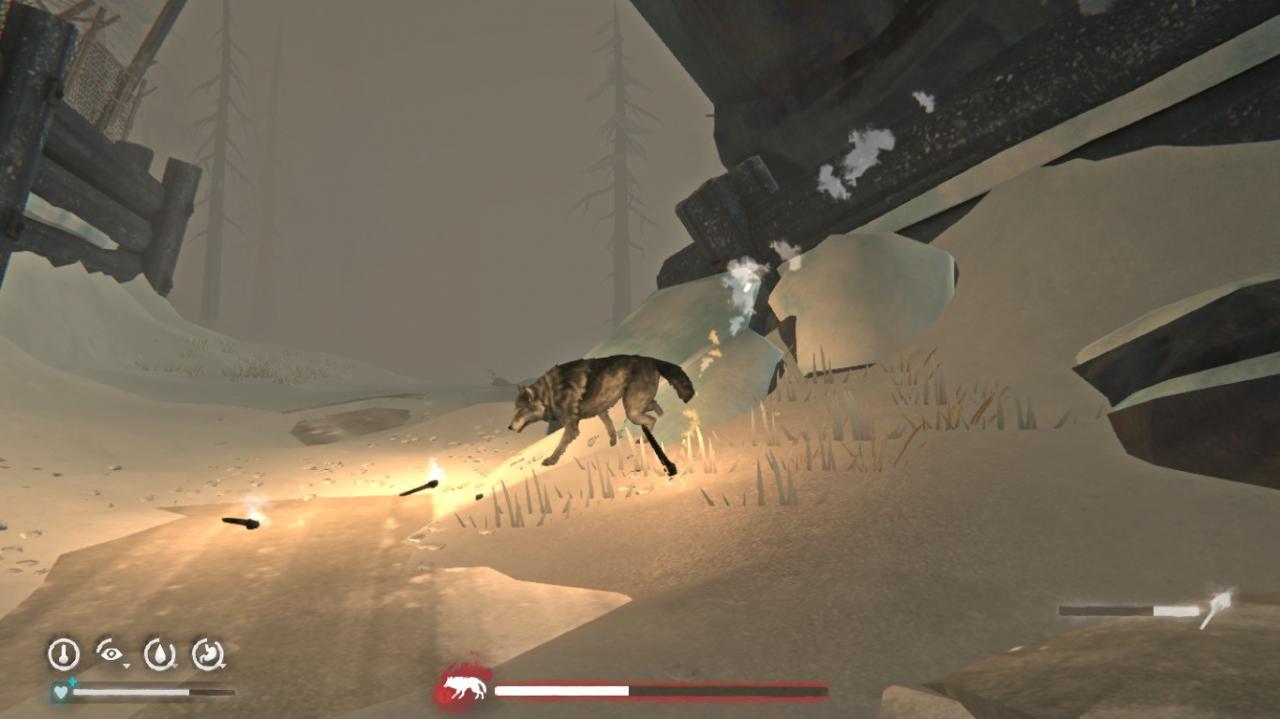 THE PROMISED LIFE HACK
Throw a burning torch at the snarling wolf (celte between the forepaws), so that the torch falls under the belly. This is the perfect target to throw.. Scared wolf, running away, touches the torch several times. The attack bar will disappear in two or three rolls. And if you're lucky (I get lucky), then with one throw you can take off immediately 100% from the attack scale.

Good luck. Master, as I, three methods (escape, retreat, the fight), learn to throw a burning torch between the wolf's paws right under the belly, and forest wolves will become just another predictable and manageable obstacle on the way to long-term survival in the vastness of Long Dark.