How to turn from a land rat into a real filibuster.
For those, who wants to go to the high seas as soon as possible, I prepared a small guide and put everything on the shelves.

At the very beginning of the game, each player's inventory contains the entire arsenal of items, present at Sea of ​​Thieves. You cannot find new equipment, you can only buy cosmetic improvements.

There is a compass among the items, bucket, lamp, Spyglass, clock, Cup, musical instruments and supplies - bananas, restoring health, wooden planks, which are useful for repairing the ship, and cannonballs. 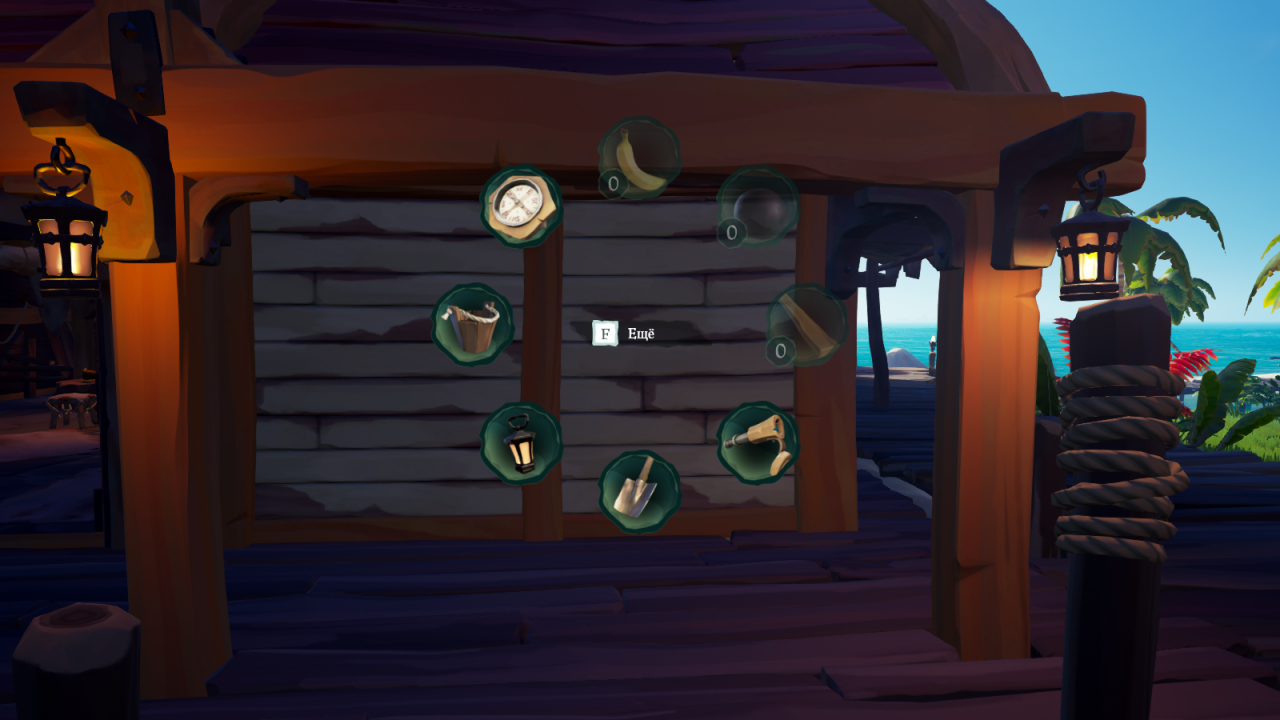 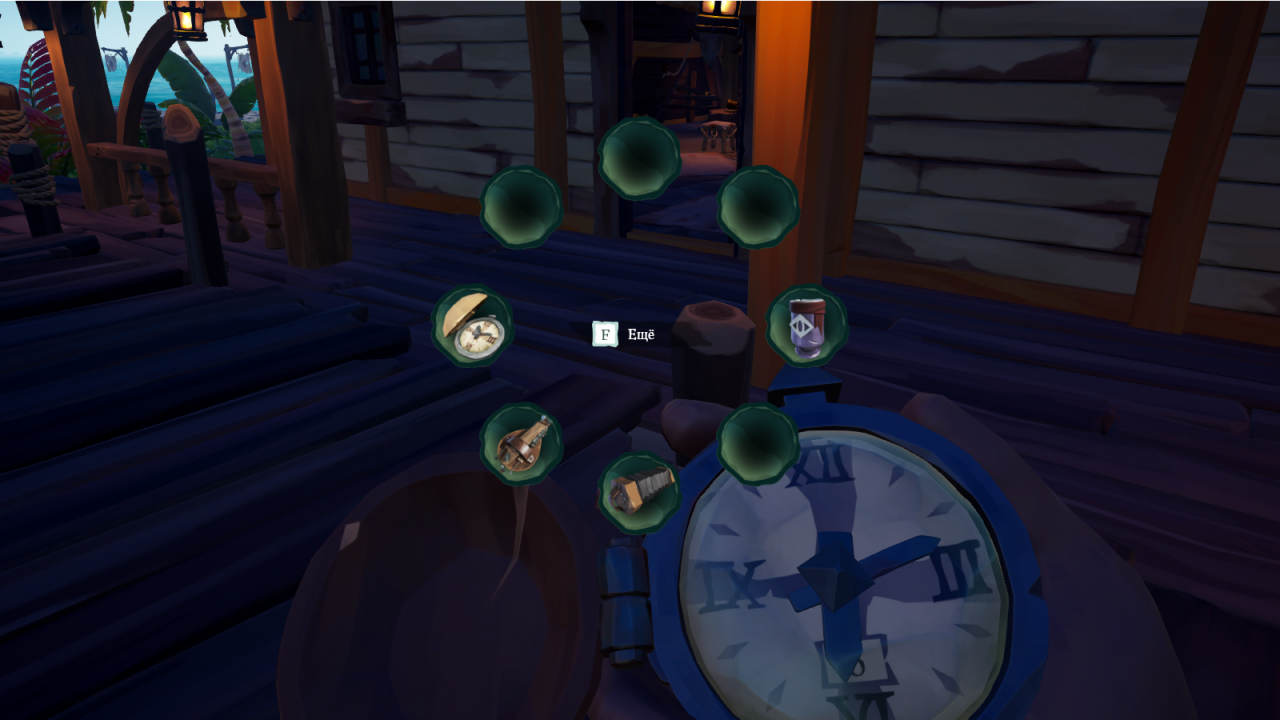 Some familiar things have non-obvious functions.:

All consumables are stored in the hold. Try to go to the island without consumables in your inventory, to resupply on the ship.

There are four types of weapons in the game: melee saber, pistol - weapon for medium range, blunderbuss - close range cannon and long range - "sniper rifle". You can only take two of them with you.. You can replenish ammo in the ammo box, who is on the ship.

Each time, before leaving for the game session, you need to choose a ship from the two presented: galleon - massive and well-equipped ship, or sloop - small, but more maneuverable ship.

The galleon has three sails and eight cannons on board. It is designed for a team of three to four people. The sloop is suitable for a team of two or alone: it's easier to manage, but the presence of only two cannons on board makes this ship not a very serious enemy in the battle against the galleon. But on it maneuvers are performed faster.. 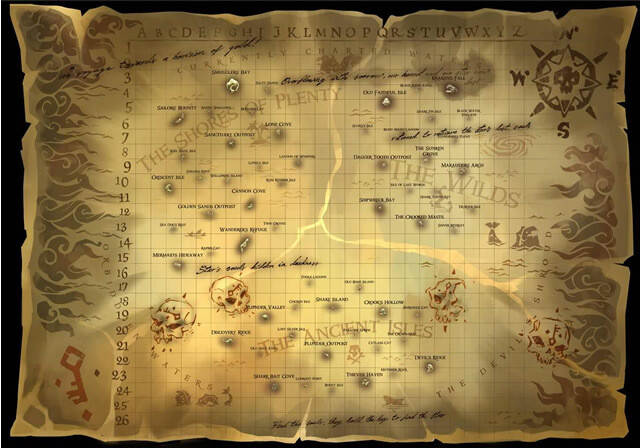 Quests are bought from representatives of three factions: Gold Holders, Order of Souls and Trade Union. They are located in trade outposts., scattered across the map. In one of these territories, the character appears at the beginning of the game..

You can buy three types of tasks from each seller, you, in turn, can only carry three quests with you at a time.

You can find quest givers by the flags above their shops.

The topic of the tasks depends on the faction: working for the Golden Holders, you need to look for treasures, The Order of Souls wants you to kill skeletons and bring back special skulls, a Trade Union - to catch animals and loot items in a limited time. Two non-obvious facts: animal cages can be purchased from merchants, and time should be checked by pocket watch.

The purchased quest must be placed on the captain's table, and then vote for it. When team members vote on an assignment, it will start, and you will receive a card.

Besides improving your reputation, you are awarded gold, which needs to be spent somewhere - you can do this at merchants in trade outposts. Items from merchants differ in appearance, but do not give any advantage in battle. You can find merchants by signboards. 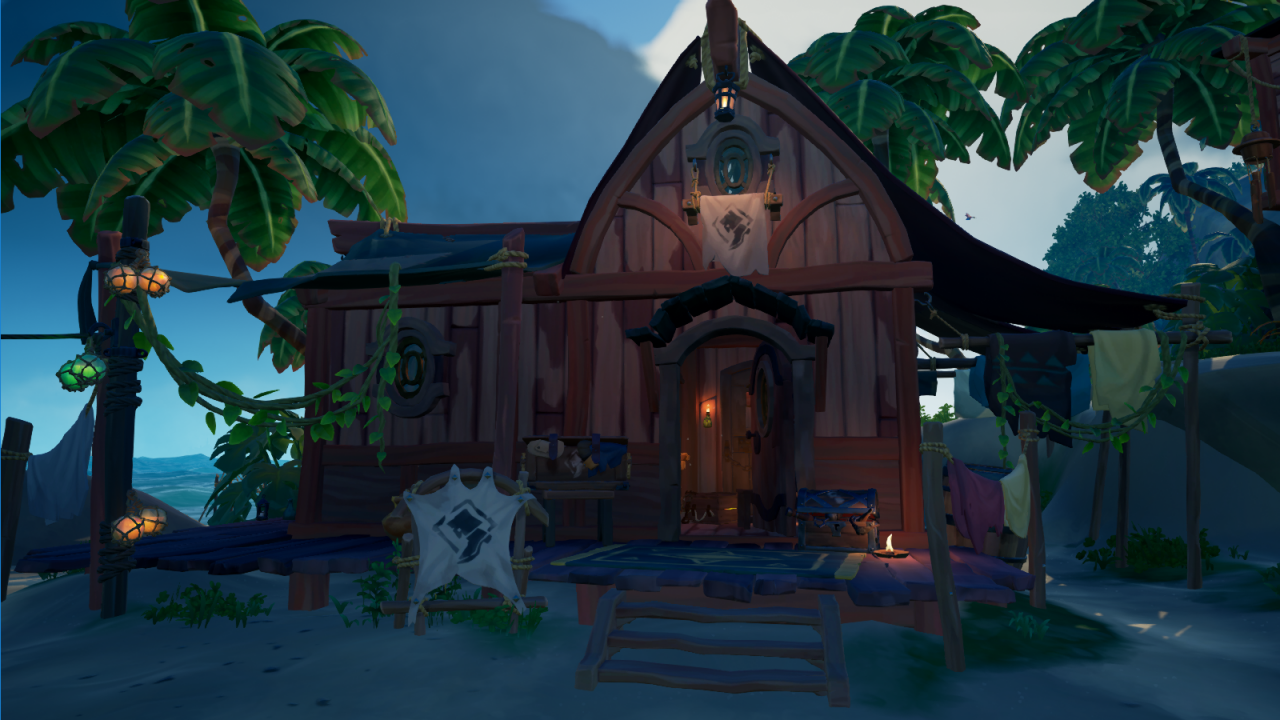 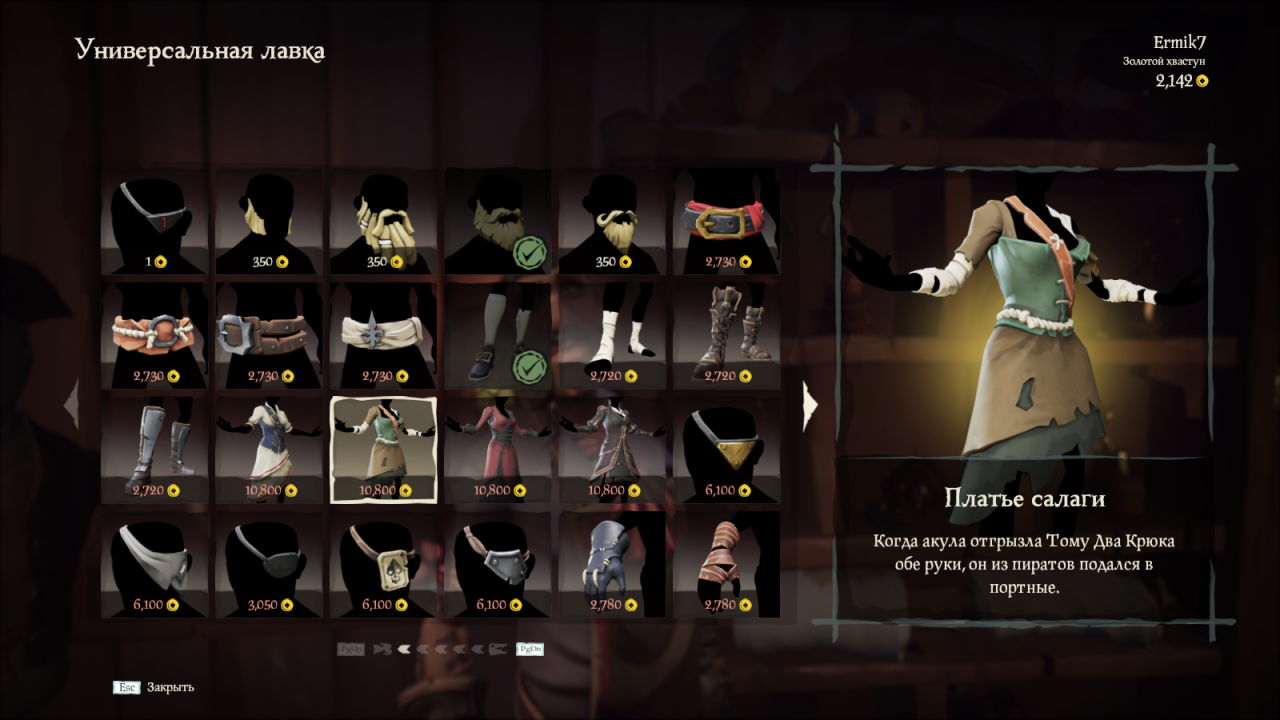 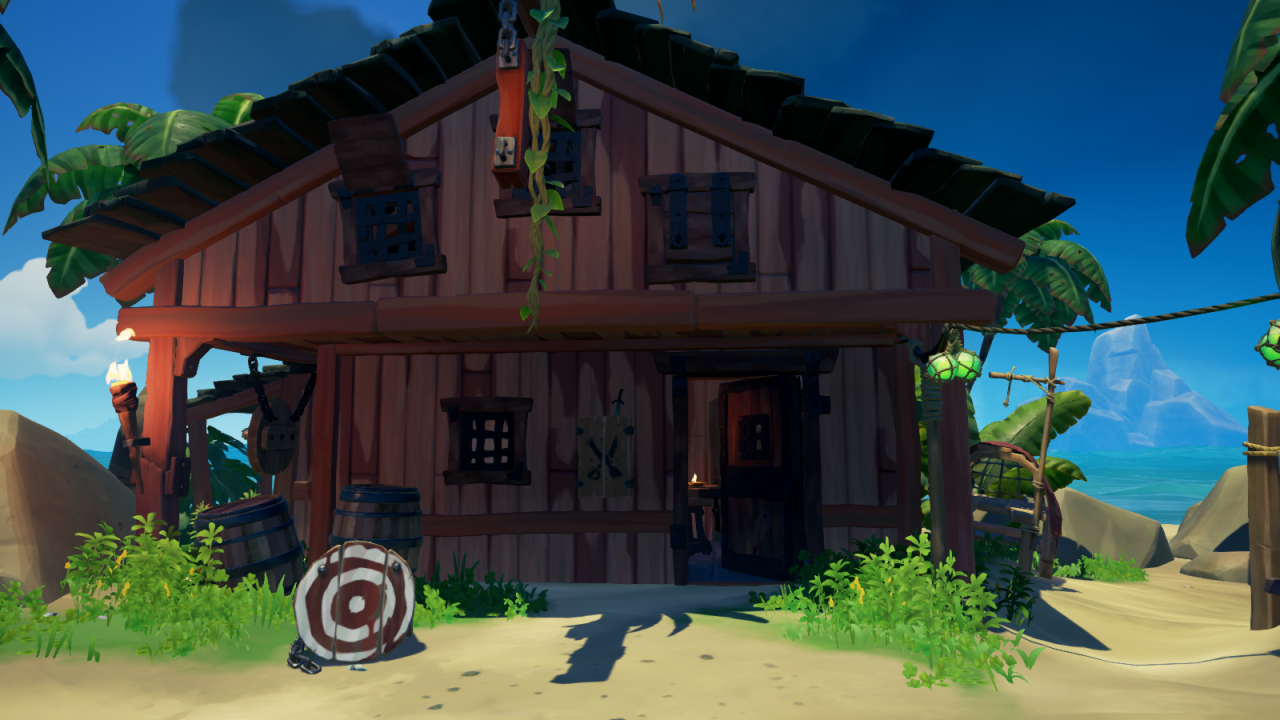 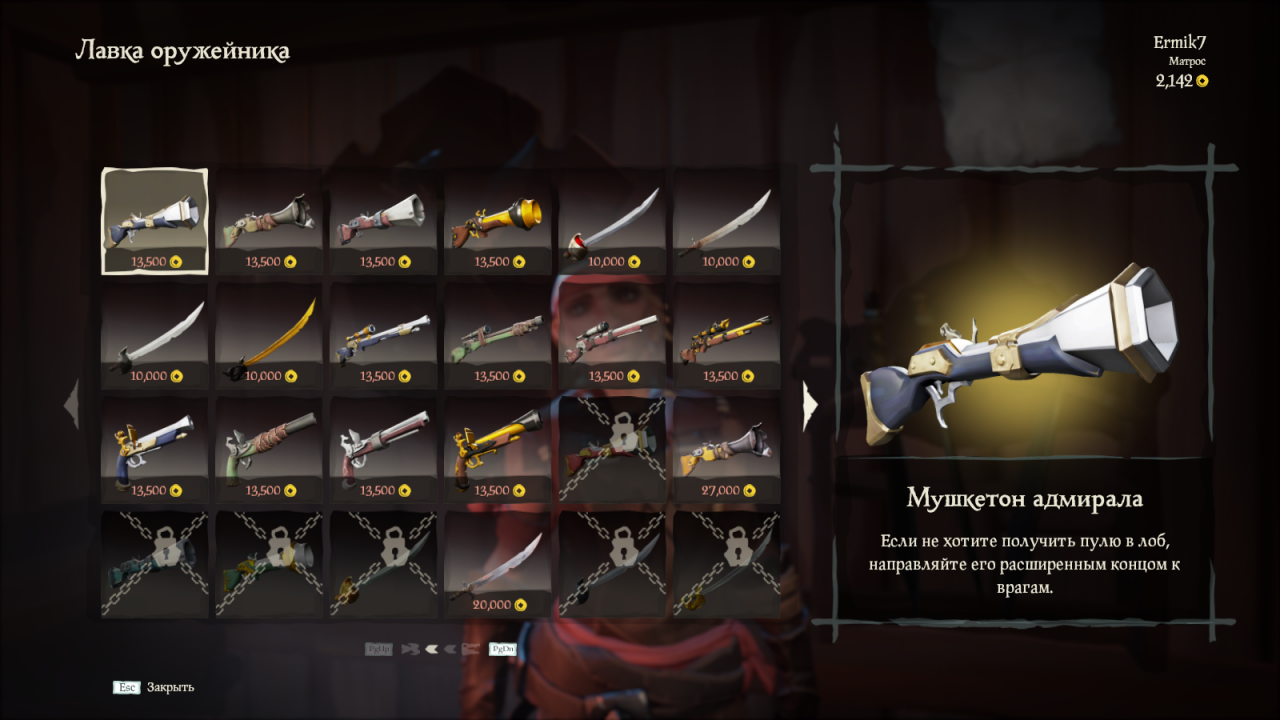 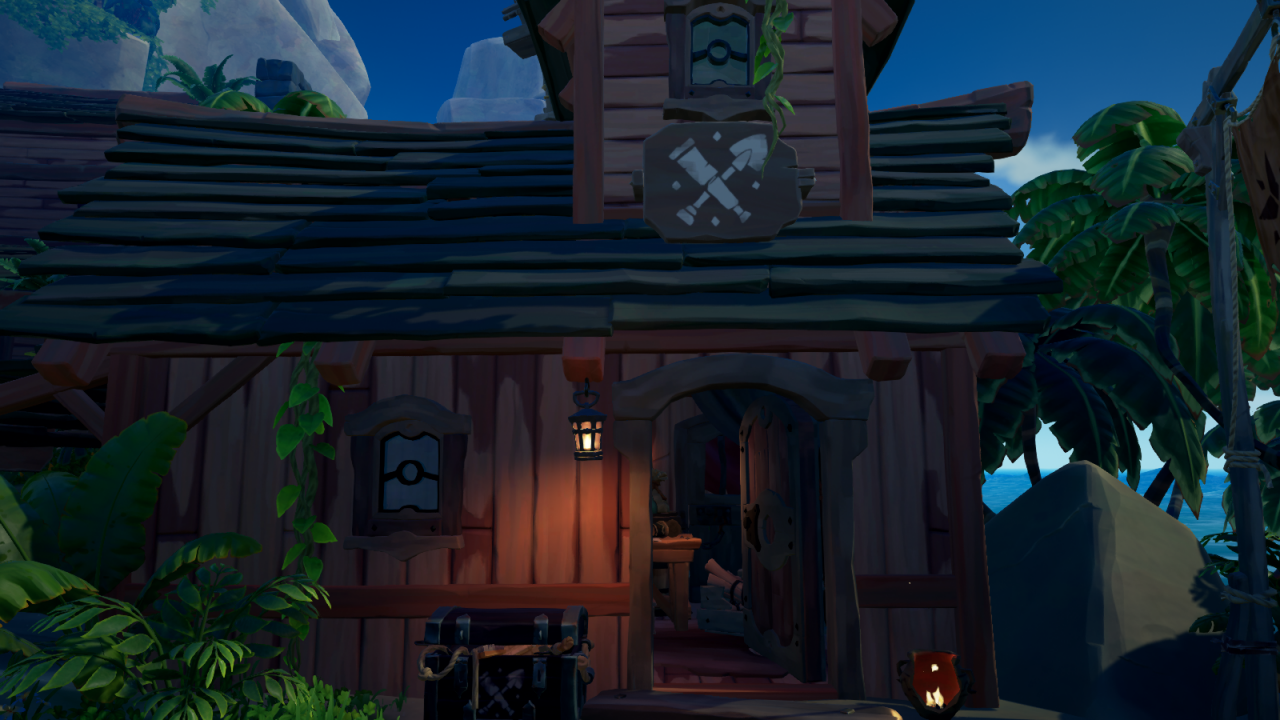 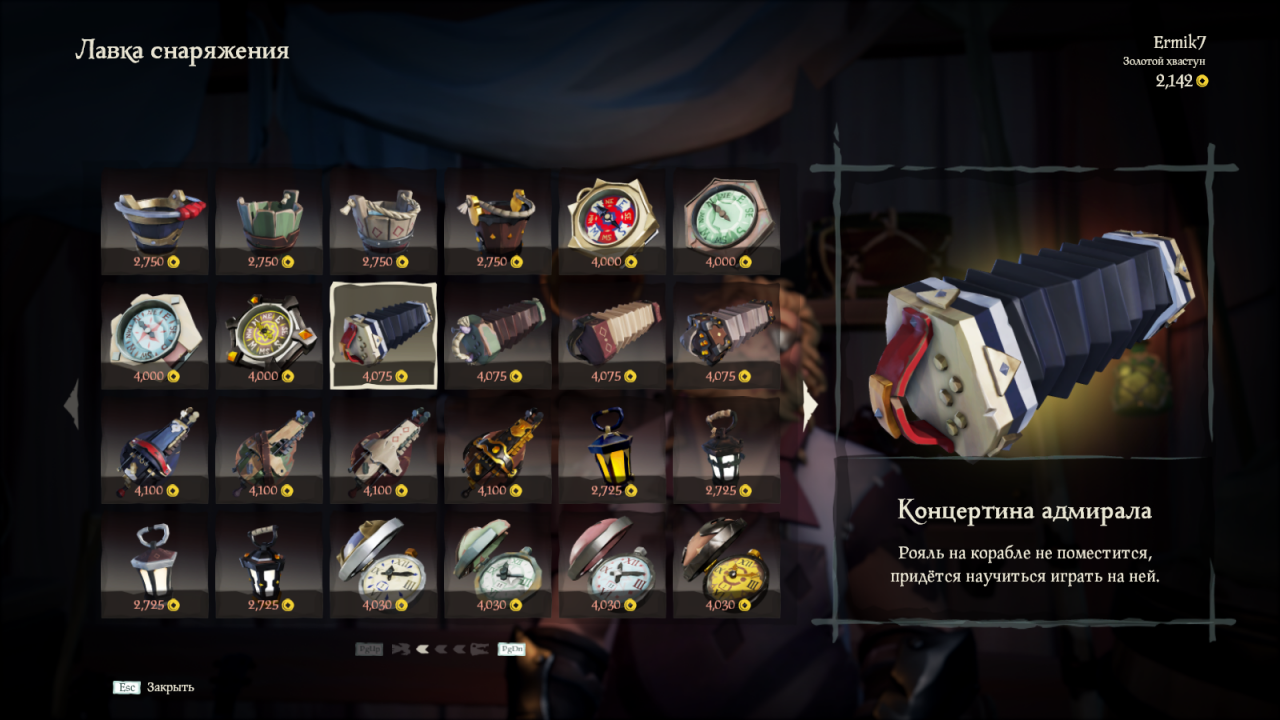 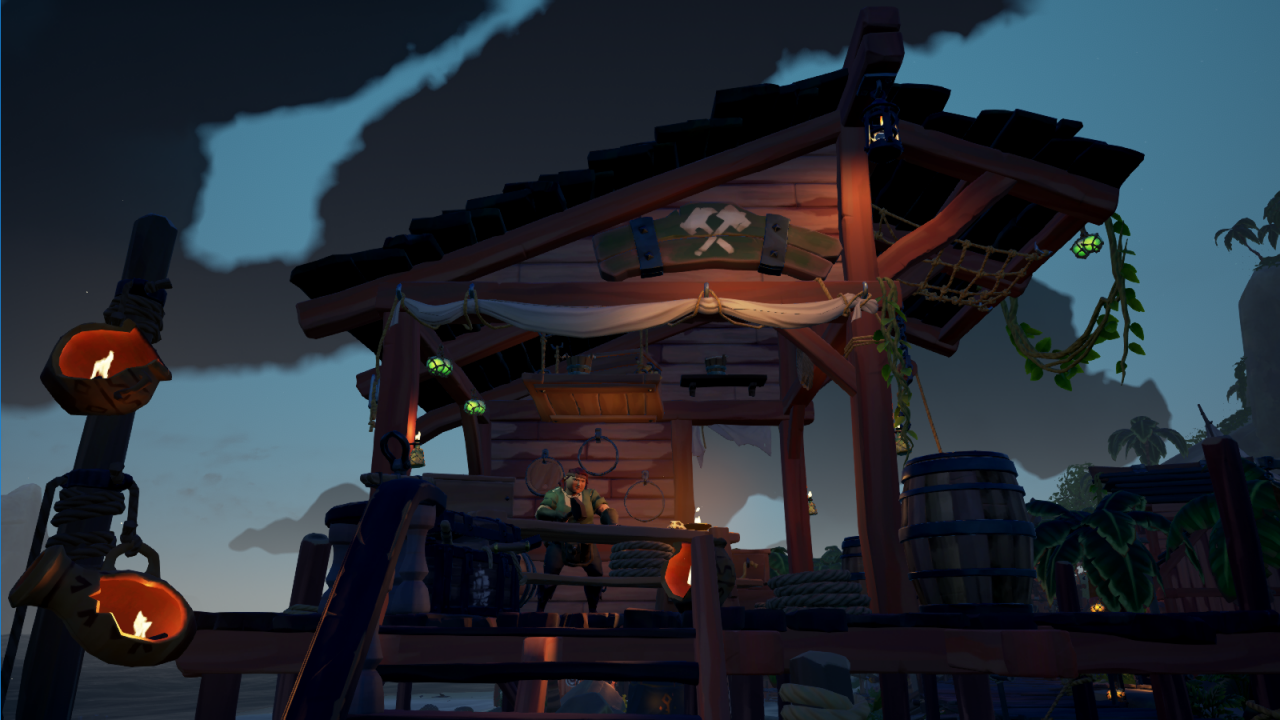 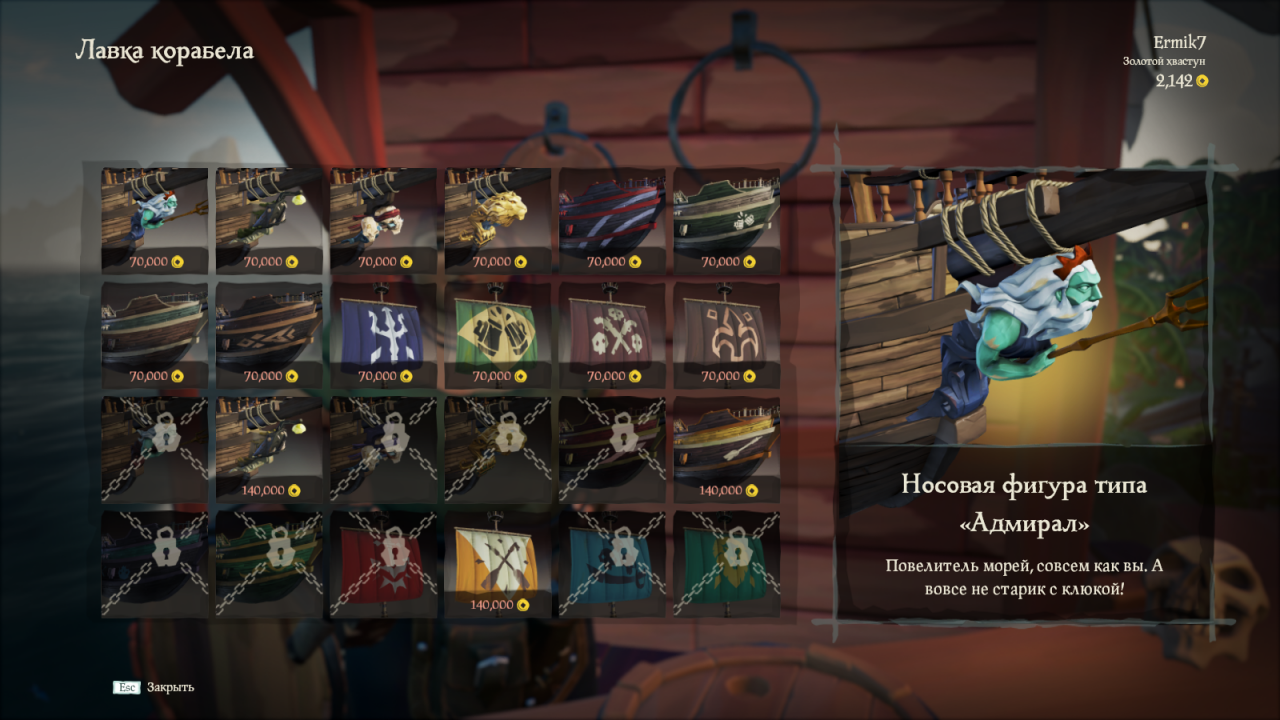 What's really important about Sea of ​​Thieves is knowing how to properly handle the ship.. Here are some nuances. 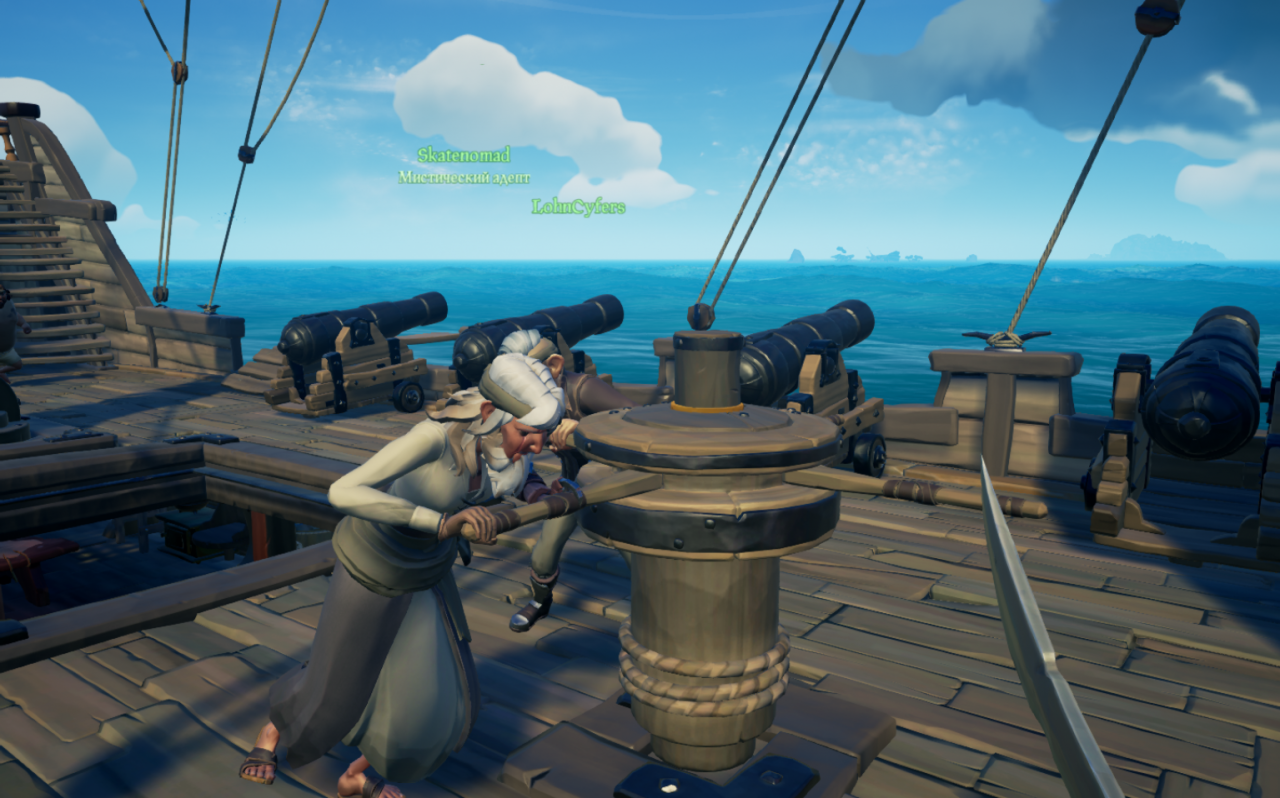 To move from a place you need to raise the anchor. On sloops, he's right behind the helm, and one person can quickly handle it. On galleons, it is located in front, closer to the head sail, and it's better to lift it together - it's faster this way. If you need to turn around sharply, you can drop the anchor abruptly, and then lift it back. 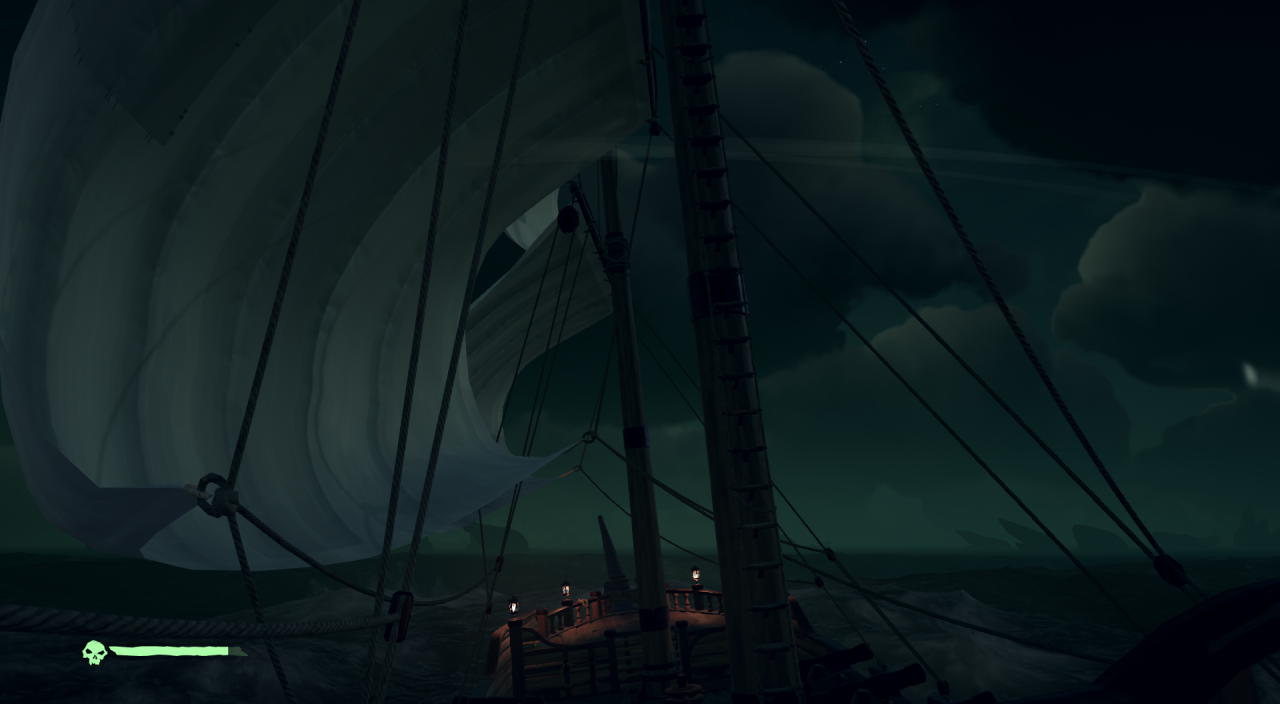 Each sail is steered by two ropes: one raises and lowers the sail, the other turns it in the right direction. To reach the maximum speed of the ship, you need to direct the sails in the direction of the wind, which can be determined by the white stripes in the sky. 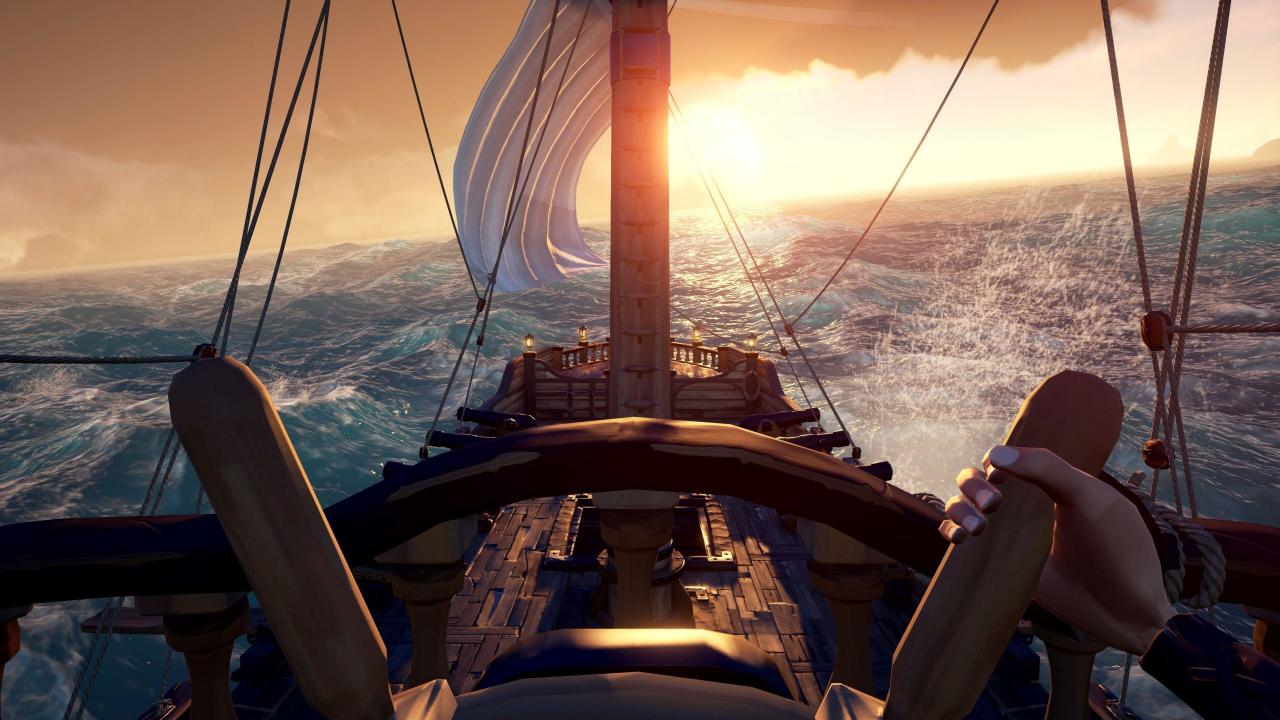 The steering wheel is simple - turn it in the desired direction. Tuning into the desired course, you need to keep it exactly in the middle. Left, the right and middle handlebars are gold plated to help you understand where your steering wheel is.
Consistency is important in ship management. Better to pre-assign roles: someone must be at the helm, someone to follow the course on the map. It is also important not to forget to tune the sails in the wind and look around through the spyglass..

Sooner or later, you will have to meet with other pirates and join them in battle. To drown enemies, you need to create a sufficient number of holes in the ship's hull below the water line and prevent the enemy team from patching the holes. The main weapon in naval battles is the cannons on the deck. To shoot, you need to load a cannonball from your inventory or take it in the hold. You need to shoot, calculating the flight path, and take into account the wind, speed and distance to the enemy. You can sit in the cannon yourself and shoot yourself, to quickly close the distance.

A great way to defeat enemy pirates is to get to their ship with a powder keg and blow it up in the hold. This will immediately create a lot of holes., and the ship will start to sink. After that, just don't let the enemies patch up the holes in the case., killing them, and the ship will sink, depriving enemies of the resurrection point.

And of course you can ram and board an enemy ship.. this is dangerous, because your ship may be left unprotected.

There is a great way to defeat a galleon, on the sloop: you need to spread the barrels in front of the ship and go to the ram. The barrels will explode and deal a lot of damage to the enemy ship. Unfortunately, this trick does not always work. Apparently, in the near future such a possibility will either be cut out of the game, or, on the contrary, will fix. 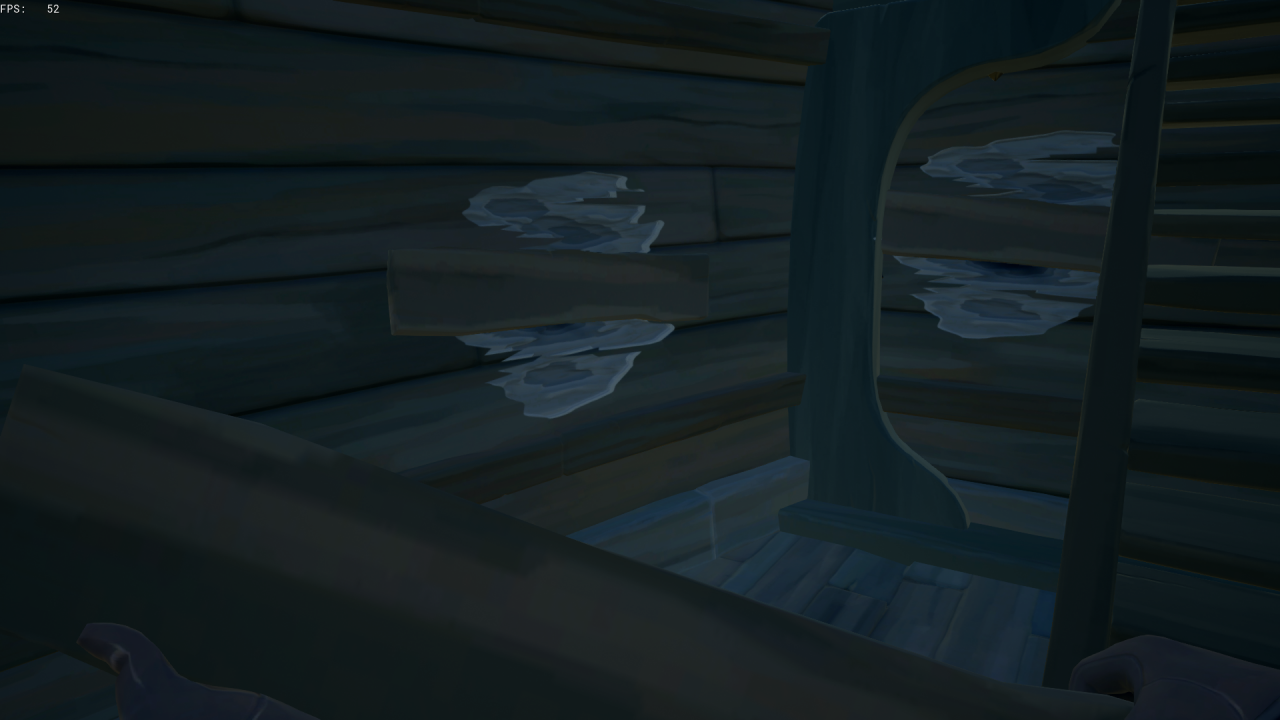 Don't forget to repair your ship during a naval battle. This is where wooden planks come in handy., which need to close holes in the hold.

When the ship is damaged, it begins to fill with water from the inside, so not to go to the bottom, need to take out water, using a bucket. 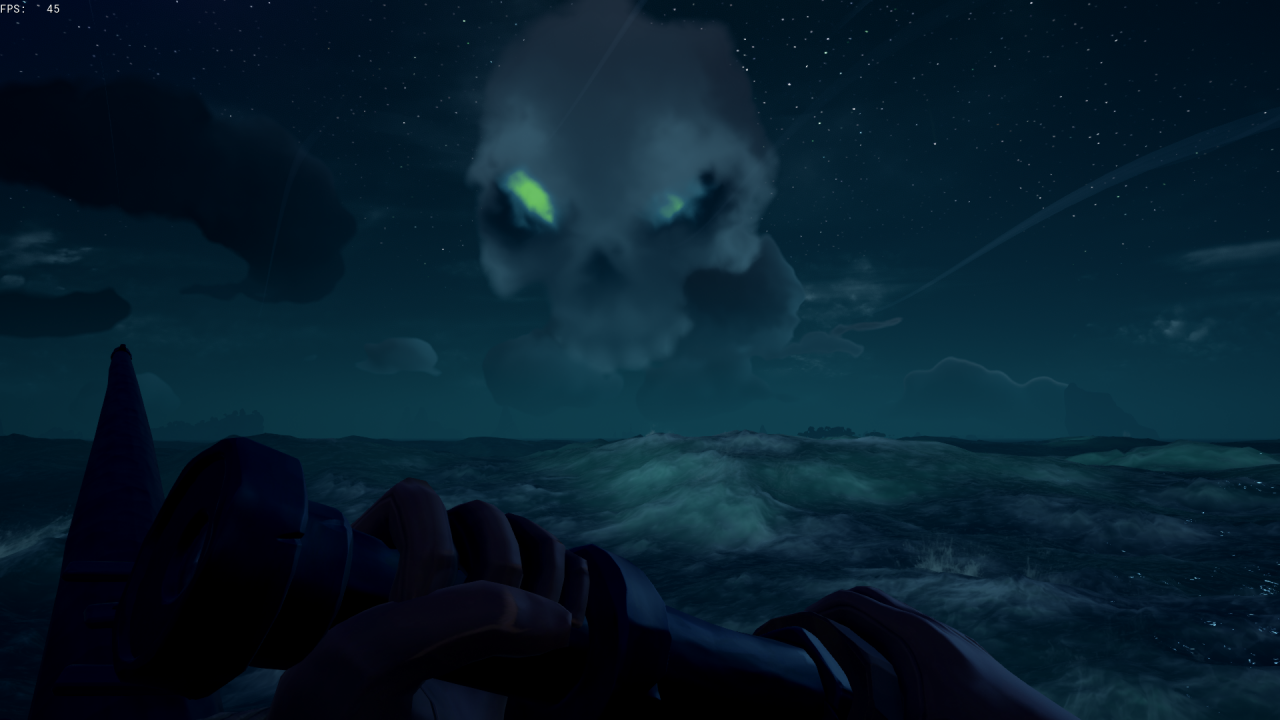 Sometimes on the horizon you can see a huge ominous cloud in the form of a skull with glowing eyes - a fort of skeletons. This is an event quest, for which you can get a bunch of treasures.

As the heroes approach the island, skeletons will fire cannons at your ship, therefore it is important to take care of, so that the crew is ready to repair damage on the ship. 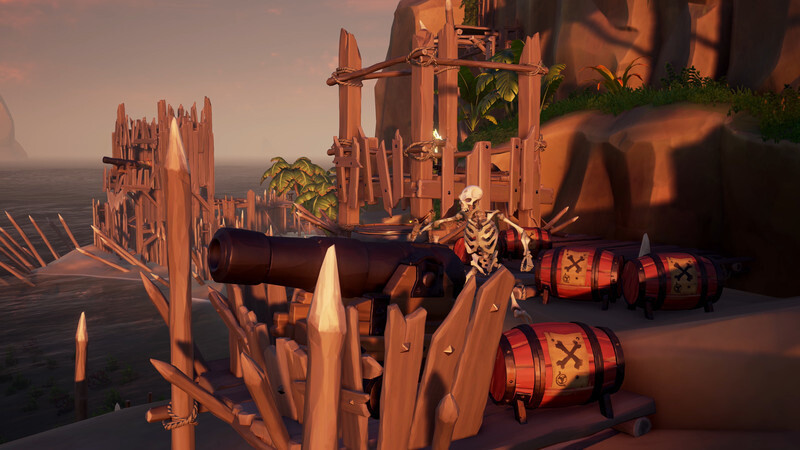 Dock to the shore. Then the fun begins..

Skeleton waves
To complete the event and gain access to treasures, you need to overcome several waves of skeletons, appearing on the island. Skeletons come in several types and appear randomly.

After that, how will you beat all the waves of skeletons, the boss will appear, from which the key to the main crypt drops out - there you can find many treasures. It is important to deliver the treasure to the nearest port as soon as possible and sell it.

To make it easier to deal with the waves of skeletons, use your ship. First moor sideways to the shore. Have a couple of players lure the skeletons, and the rest are shooting cannonballs. Good hits can mow down whole crowds of opponents.

Clearing the Skeleton Fort is a dangerous and challenging task, but in this way you can get approximately 10-20 thousands of gold for a visit and thoroughly pump reputation with factions.

Remember, that the skull in the sky is visible to all players on your server. It means, that you will have rivals, who also want a lot of profit. Other pirates can wait, while you do all the dirty work, and then attack your ship, to clean it. Try not to engage in combat, so that there is no risk of losing all the treasures.

A trained pirate is a lucky pirate

A few tips for beginners: