Clubstep - 14th level and first demon in Geometry Dash, which opens when received by the player 10 coins. Added in an update 1.6 along with Electroman Adventures. Lots of new items appear here (invisible thorns, blocks, etc.). Most players rate Clubstep as Easy demon, less commonly as Medium demon. Is not a very easy level for beginners.

Gameplay
The level starts from the cube stage. At this stage, we often come across trap spheres and saws.. If you know, which spheres are traps, then this stage is easy to go through. Then we get to the stage with disappearing blocks.. After that we are given a break.

Now we have to play for the ship. Here we have to fly through structures in the form of demons., changing the gravity. The last three demons have disappearing thorns, so be careful. The next stage starts again with a cube. In the middle of the stage, we will shrink and will be like that until the next stage of the cube. It will be important to quickly click on the gravitational spheres., but at the very end there are several trap spheres. Then we turn into a ball.

At this stage, we will encounter a lot of fake moments.: trap spheres, secret passages, false platforms, so you have to be careful. Then we control the UFO, for which we will have to very carefully jump between the structures of the spiked demons. Then we turn into a ship, which we have to fly through a not very wide passage.

After all this, we again turn into an ordinary cube.. At this stage, we have to jump over the spheres.. be careful, since there are disappearing thorns in the next stages! In the next stage, we play as a smaller ship., in which we have to fly through the aisles. Further, I play for UFOs, we have to jump through the narrow passage of structural demons. Now we're playing for the ship again, for which we need to fly through the demons, but keep in mind, that we need to fly over the third demon! After them we fly through a narrow passage, in which, Besides, gravity is changing.

Now we play for the enlarged cube again. Then again a smaller ship. Here we fly through a narrow passage with variable gravity and demons. Again a cube, but now reduced. AND, finally, the last stage for the ship, for which we fly through demons. On the last demon, we must fly under it.

Secret coins
The first coin is on 9%. At the first stage of the cube, you need to click on the second yellow sphere to collect it.. 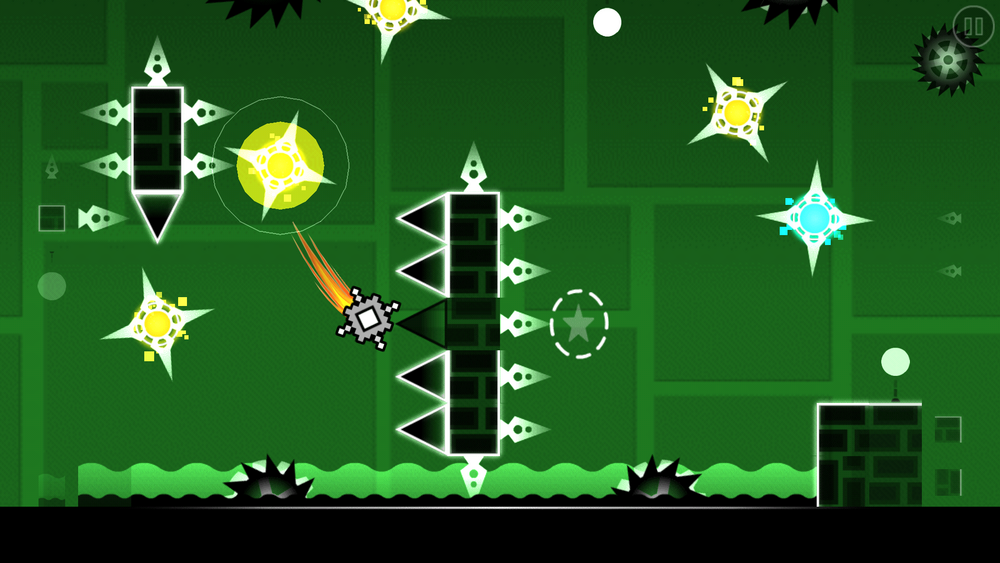 The second coin is on 70%-71% second stage UFO. To collect it, you need to fly into a secret tunnel. But be careful, invisible thorns will be waiting for you inside. 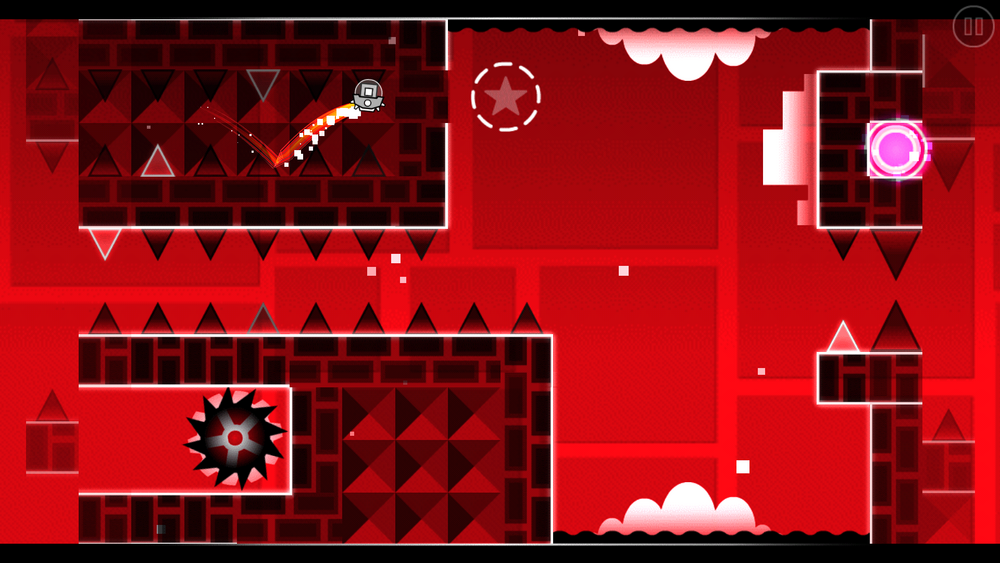 The third coin is on 95%. At the last stage of the ship, you need to fly into the lower jaw of the demon, to collect a coin. 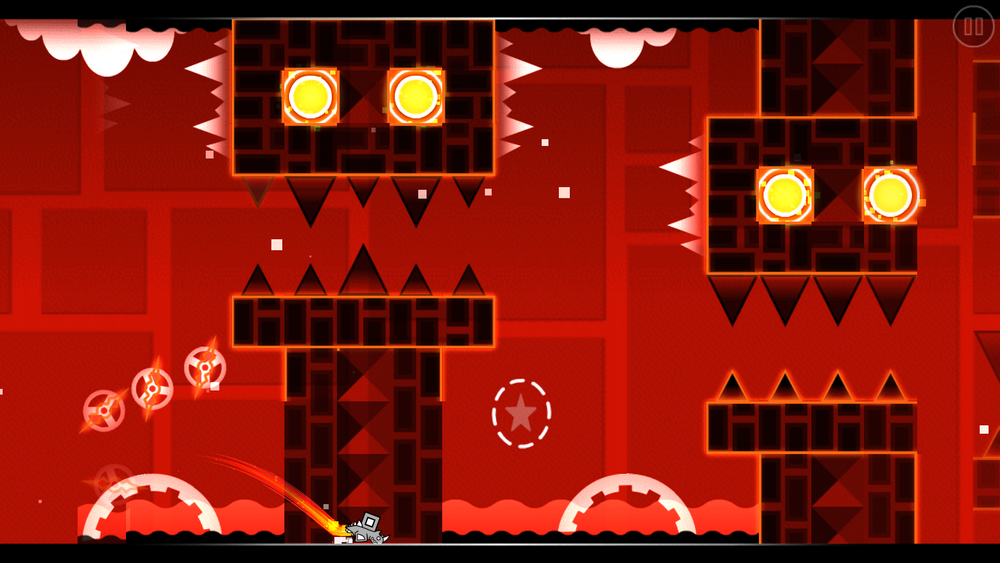 Bugs
If immediately before the start of the level, you pinch and hold, then you will hit the spike in front of the spheres. If after that, how did you get on this thorn, jump immediately, then you will not die and go to the spheres.
· If on 3% click on the fourth blue sphere with a delay, to na 4% you can skip the purple sphere and not die.
· If on 12%, when will you fly up, you will press pause, the screen will move up, but the ship is back to normal.
· If on 25% pinch the screen, then you miss the anti-gravity trampolines, and at the first stage of the ship you will be in a state of anti-gravity.
· On 35% there is a possibility, that when you fall, you miss the reduction portal, after which you will die by about 42%.
· On 39%, if you press in front of the anti-gravity trampoline, then skip it too, and the first of the four anti-gravity spheres, which are before the stage of the gravity mini-ball.
Also on 39%, unless you click on the fourth anti-gravity sphere, that is, the probability, that you will fly a cube between the saws and die on 41%, crashing on “ceiling”.
· On 48% there is a possibility, what, hitting spikes in front of a secret passage in the wall, you will not die, and slide on them.
At the mini-ball stage, on 51%, before the first mini UFO, you can skip the portal of gravity, and at the stage of the first mini-UFO you will be in inverted gravity.
· On 64% you can skip the last one before the third ship stage (second mini-ship) antigravity sphere.
· On 84%, when changing gravity at the cube stage, even if you do it right, then you can hit the block and lose. This is an almost random bug., you cannot influence him, and therefore one of the most unloved. This bug can happen, if you bounce off the second blue sphere or too early, either it's too late.
From 𝐦𝐨𝐟𝐚