Probably most of all for Humankind I observe indignation due to misunderstandings with the end of the war..

for example, “they don't give me the city, which I captured in the war”, or “give too few cities”, or “why is the war over, I still want / can” etc. It was especially strange to watch how in the cartoon they declared war on me right away 5 opponents, but only one of them came to the war. People clearly outplayed Qiva, and did not understand what stupidity they did.

I want to clarify these questions a little., but first I will briefly note, what kind of war could it be possible to capture and 10 cities, but you need to know how and when it can be done.

The issues of war and peace in HK are somewhat reminiscent of the Europa Universalis series (или Stellaris). It makes sense for the player to monitor military support and prepare the ground for war. That is, not only the army needs to be created, but also think over how to start a war later, and what to fight for. After the war, peace will surely follow, and this is also worth considering. Although the ability to attack anyone indiscriminately is also present.

First you need to understand how it changes military support: 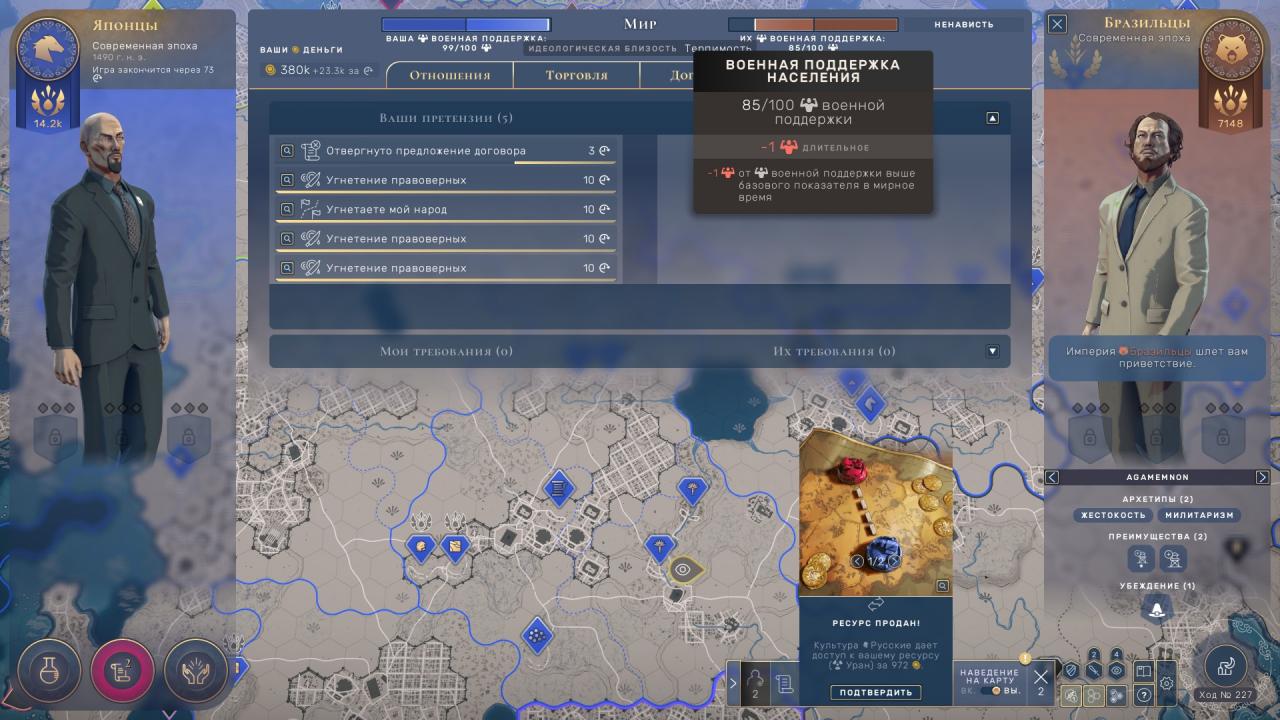 Equilibrium state during peace: 50 (of 100)
Every turn of the world we get approximately +/-2 towards these 50.

Output 1: in a simple case it is required 25 moves so that after the war with 0 reach 50 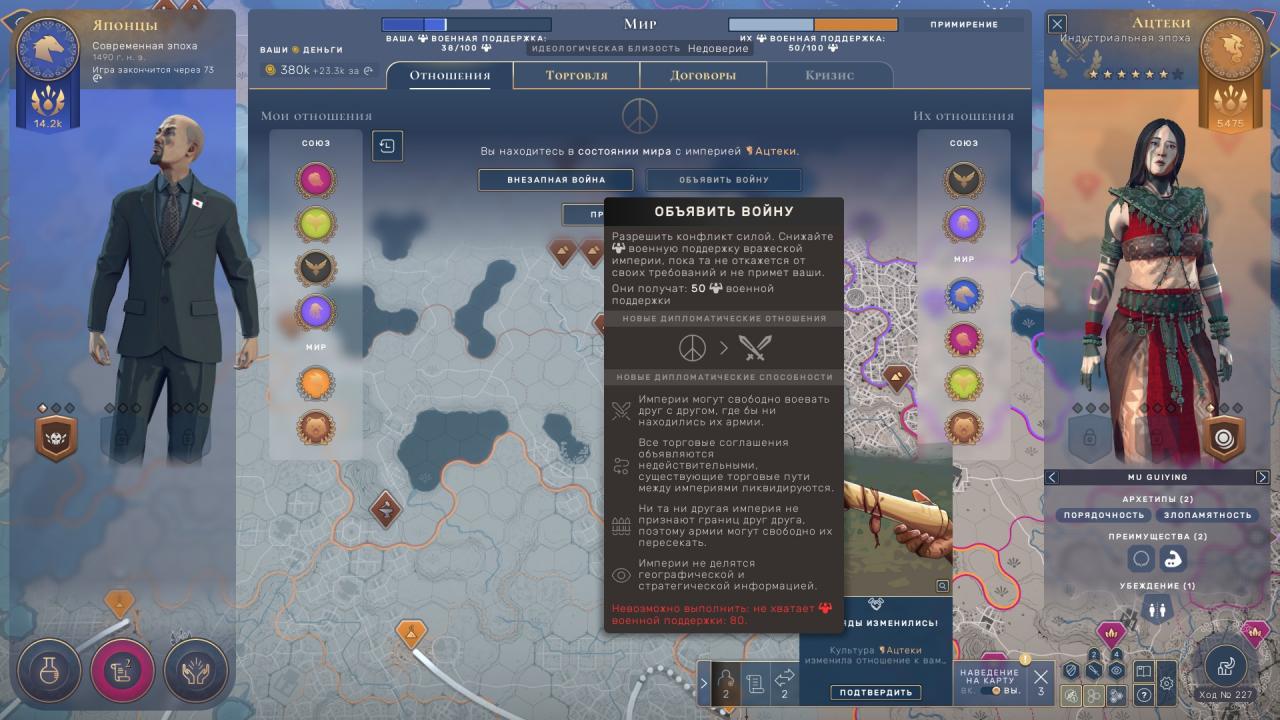 Output 2: the situation itself will never come to war. To do this, one or both parties must make some effort..

The one who declared war receives -0..-3 every move (looking at the ideological similarity of the opponent and the justice of the war). The victim gets nothing like that.

Output 3: If you do not know how you will reduce your opponent's support – don't start the war yourself. You will definitely lose it, and pay reparations or give up territories.

What affects support? Breaks of contracts, consent or rejection of offers or demands, robbery of trade routes, attacks in neutral territory, border crossing, infringement of pilgrims, creation of territories near the border, etc..

Quite a lot of ways. For example, you can attack a scout somewhere and get +5/+8. Opponent demands compensation in response. You _pay_ her. Ask him for a non-aggression pact, and he refuses. And you watch your support for the war grow even more. This is not counting the actions of the opponent himself, for example, he himself can demand something from you, attack etc. In this case, military support can grow without your direct participation..

During the war there is 3 a way to get support and take it away from the enemy:

Output 4: the occupation of just one city may be enough to win the war (but it will take time), and not losing many battles (or not to fight anymore), provided of course, that you started the war with sufficient support.

It's all better to try, to understand how it works and how it can be used.

Then you need to deal with the mechanisms claims and claims. 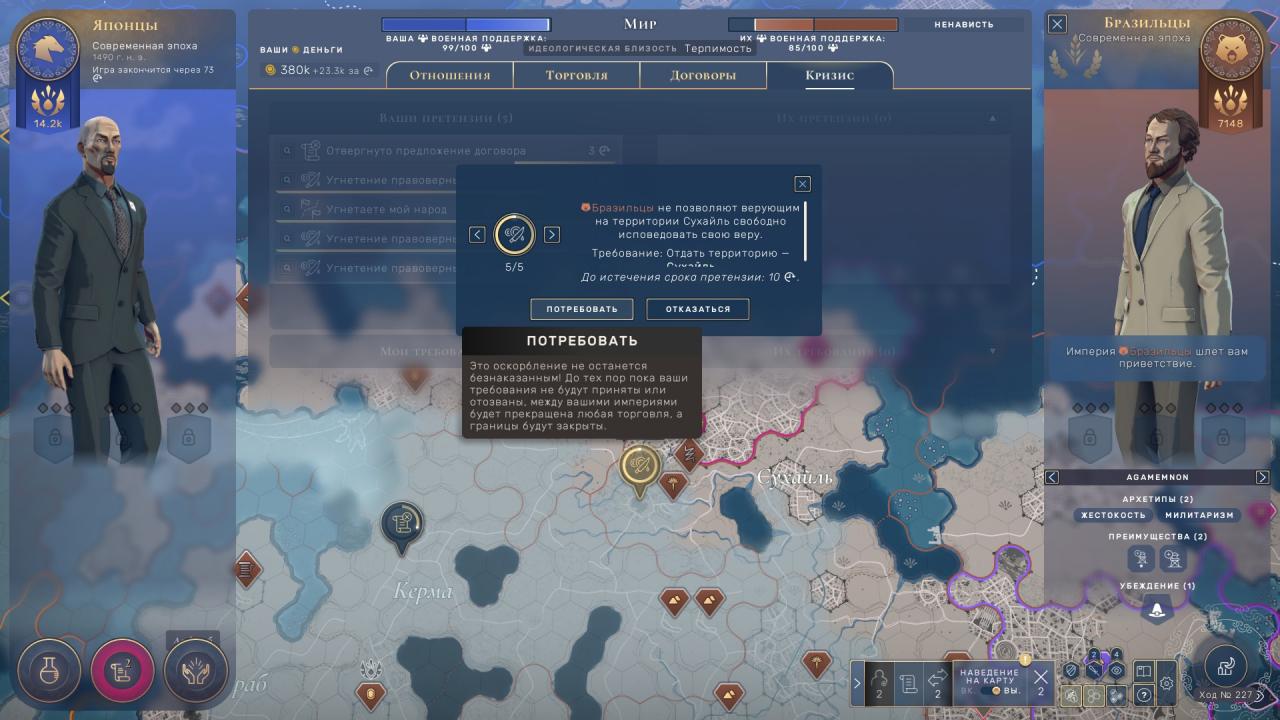 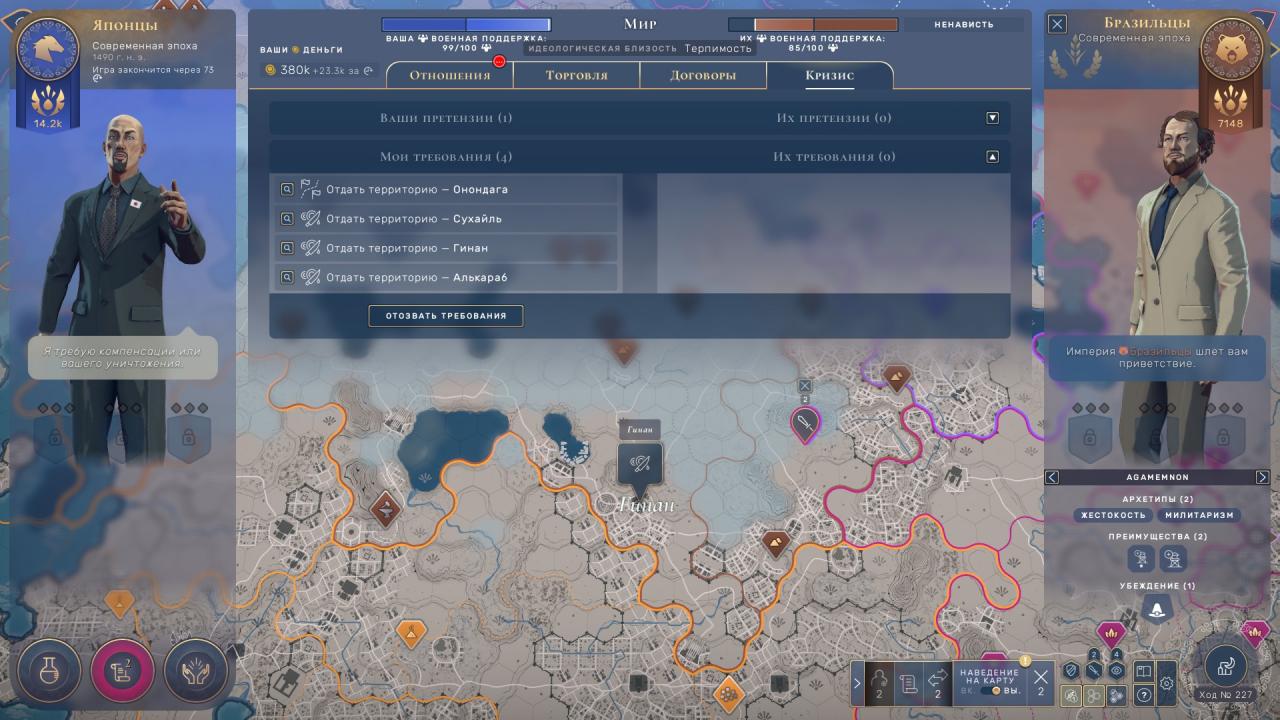 All of the above events are recorded in the column claims, where hang up 10 moves. There they can either be written off (forgetting grievances, just not to spoil the relationship), or rewrite in requirements. From now on there is 3 option:

1. requirements may hang unanswered, in this case, their fate will be decided during the next war – the winner will present them for satisfaction (reparations, territory, conclusion of contracts).

Also, if you have more requirements than your opponent, then you get every move +3 to support, a good option to prepare for this war.

2. requirements can be accepted, and you will get everything you want, but the opponent will greatly increase support for the war.

In fact, it may be beneficial for the opponent to accept the demands., if there are fears that the war will cost even more. For the same reason, you can always surrender during a war., without waiting for support to drop to 0, the capture of several cities and the death of the army. And get a period of peace.

3. claims will be rejected, which will give an increase in military support to the opponent and can immediately lead to the outbreak of war

Ideally, when at the beginning of the war you have support 100, and in the opponent 50 or less. In this case, you have a head start., and faster you can end the war with victory.

Now how the wars end.

I already mentioned the option to surrender above.. Otherwise, one of the parties must drop support for the war to 0. This means that all, it is no longer possible to continue the resistance, and you have to agree to the demands of the winner.

The amount of losses depends on the final support of the winner. Better to have support at the end of the war 100, and still occupy several cities. So you can get more 200 glasses, which is enough for a couple of cities or several territories. The city may be worth somewhere 80, territory 40. but (!) all cities / territories from the list of your pre-war requirements will cost only 10. Total for the war is quite possible to capture about 20 cities / territories, but only if there is fertile soil for this.

And by the way, surrender before your cities are occupied is more profitable also because, that payments will be less.

Comment. Perhaps the initial support also affects the final score., ie. during the entry into the war.

How to get claims on the territory
Exists 2 main options how to get requirements on the territory / city. The opponent must either build something right at your border, or because of culture or religion, conflicts of opinion will naturally arise. The latter depend on trade routes, and not just from close proximity.

so, if a neighbor built 2 outpost under your nose and annexed a free city there, then these 3 territory you can immediately put in the requirements, declare war later and take them for yourself.

If you just want to take all the land from your neighbor, but you have not previously observed any claims / requirements for him and you wanted to spit on all this, and support for the war of all 50, then the algorithm will be like this:

– declare war as a traitor
– immediately carry out a fast and successful military operation to attack and destroy his armies and occupy cities
– so quickly knock his support to zero and at the end of the war you get several cities / territories
– then declare war again as a traitor and repeat, the truth is, perhaps the opponent will no longer have armies and therefore it will take longer

This can only be done against a weak opponent., because. he will have a head start in support, and time is on his side too (the attacker's support drops every turn).

Example with one city

But let's imagine the situation, when the enemy has everything 1 town, no armies, and you both have 50 support…

You declare war as a traitor, and you get let's say -2 support in the course. The enemy gets +50 support for, that you had a bunch of contracts with him earlier and you flushed them down the toilet. 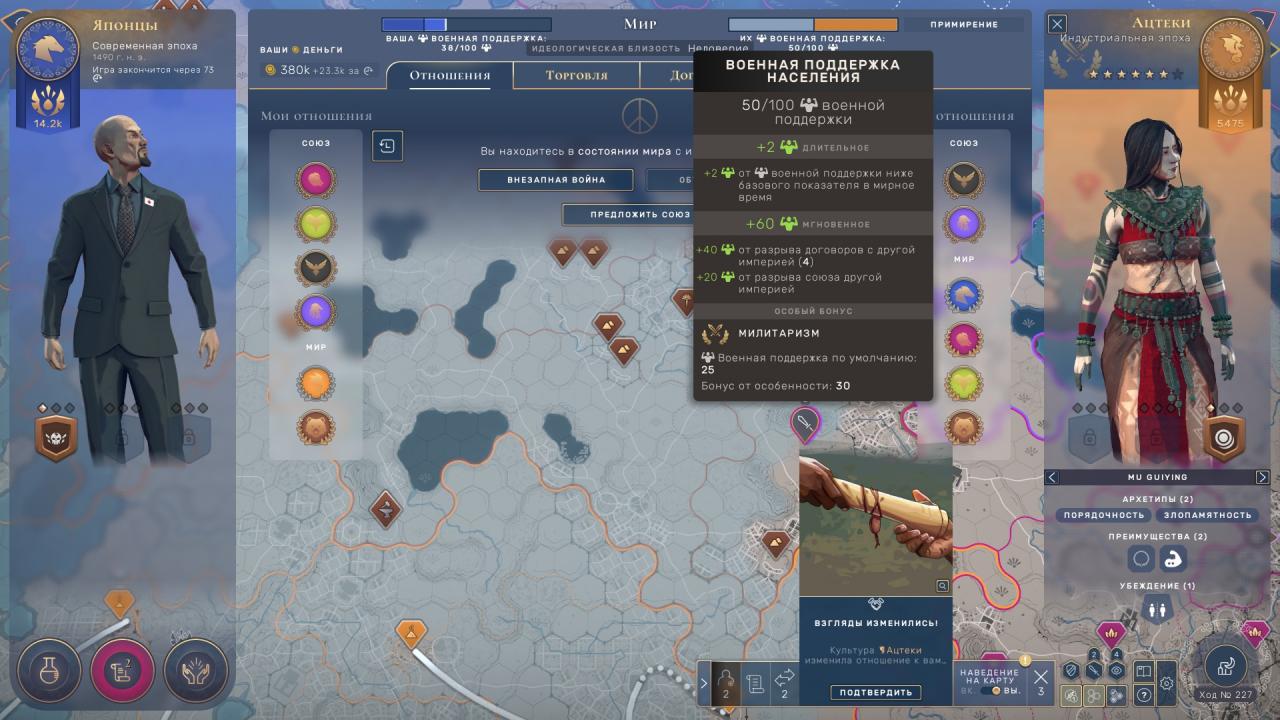 but, by this time you yourself will have support in the area 0, and nothing really you get from it. The city will have to be left.

Many people think that this is a misfortune and urgently needs to be fixed.. Although the issue is fully resolved:

– choose a militarist culture (+30 to support)
– break contracts in advance
– start a war when the enemy's support is 50, but not 100 due to the break of contracts
– if possible, catch the enemy on any claim, to get more +5 support, or more, if still not a militarist, you can even translate claims into claims
– and then it will be possible to end the war with a final score of 80 and get the city