The main body of the manual – this is an attempt to understand “line of sight” (line of sight), which is not explained in the game, but causes a lot of problems in battles for most rifle squads.

I will also give a list of all bonuses in battles., and explanations on the actual course of the battle.

The course of the battle 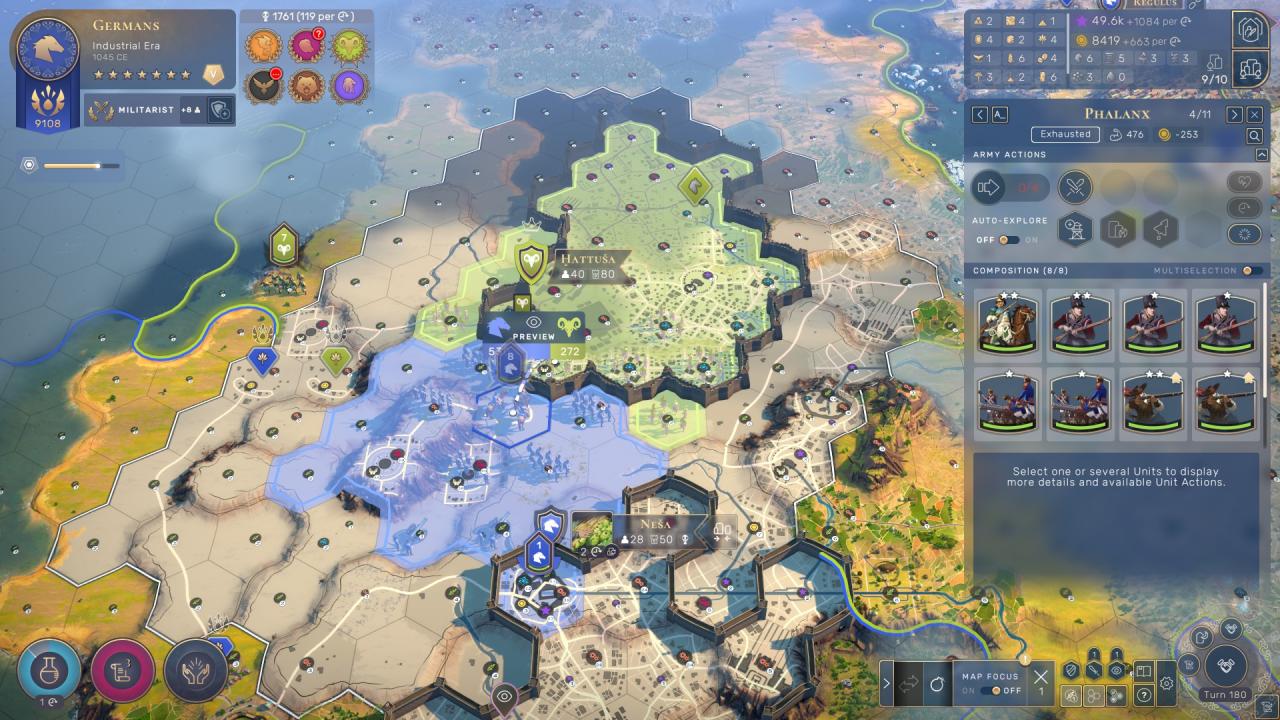 Highlighted on the screen “deployment area” (for each side), as well as the entire battlefield (outlined by a white line). The sizes of both the first and the second depend on the size of the armies. In the early eras, the deployment area was very small., but it grows as the game progresses, like the whole battlefield. It is important that all this is visible before the start of the battle..

The course of the battle:

The maximum duration of the battle also depends on the size of the armies. It could be 1 game progress for small battles, and 6 moves for large.

The attacker wins if by the end of the allotted time he has time to either destroy all enemy units (reinforcements that have not entered the battle are not counted), either will hold the defender flag at the end of the 3rd round.

The defender wins, if he himself destroys all the forces of the attacker, either will hold the flag at the end of the battle (by time).

However, it is not always obvious, who will be the attacker. Since the moves are simultaneous, maybe it will work out like that, that by approaching the enemy army with his army, he will attack you, and he will be an attacker.

General answer – is it better to attack, or defend – not. Depends on the situation.

Good to know, that the enemy can be prevented from withdrawing reinforcements, if you take the position of their exit. This is especially easier for an attacker to do., preferably with cavalry.

You can only retreat before the start of the battle. Then it can no longer be done. The army also cannot retreat the next turn., after which she had previously retreated.

The outcome of the battle can also be different. – the battle does not always end with the destruction of the enemy. Killing squads can give you glory points even without winning. But victory, even without killing, helps in supporting the war.

Most early shooters – archers – have the ability to fire even without line of sight, therefore, at this stage, you may not notice how difficult it is to play with this line. Although they get a fine -4 to the power of the shot, if there is no line.

And now crossbowmen with a shooting distance 3, are experiencing real problems, because. they need line of sight to the enemy, unless they shoot point blank, so that it is dangerous for them.

Worst situation for howitzers, at their distance of fire in 8 units. In the game, it is very difficult to apply them from such a distance., and on the smaller one too.

I have not seen an accurate description anywhere, how is this line of sight determined, but you can consider a few examples. The game speaks only sparingly “no line of sight”, and does not explain anything. 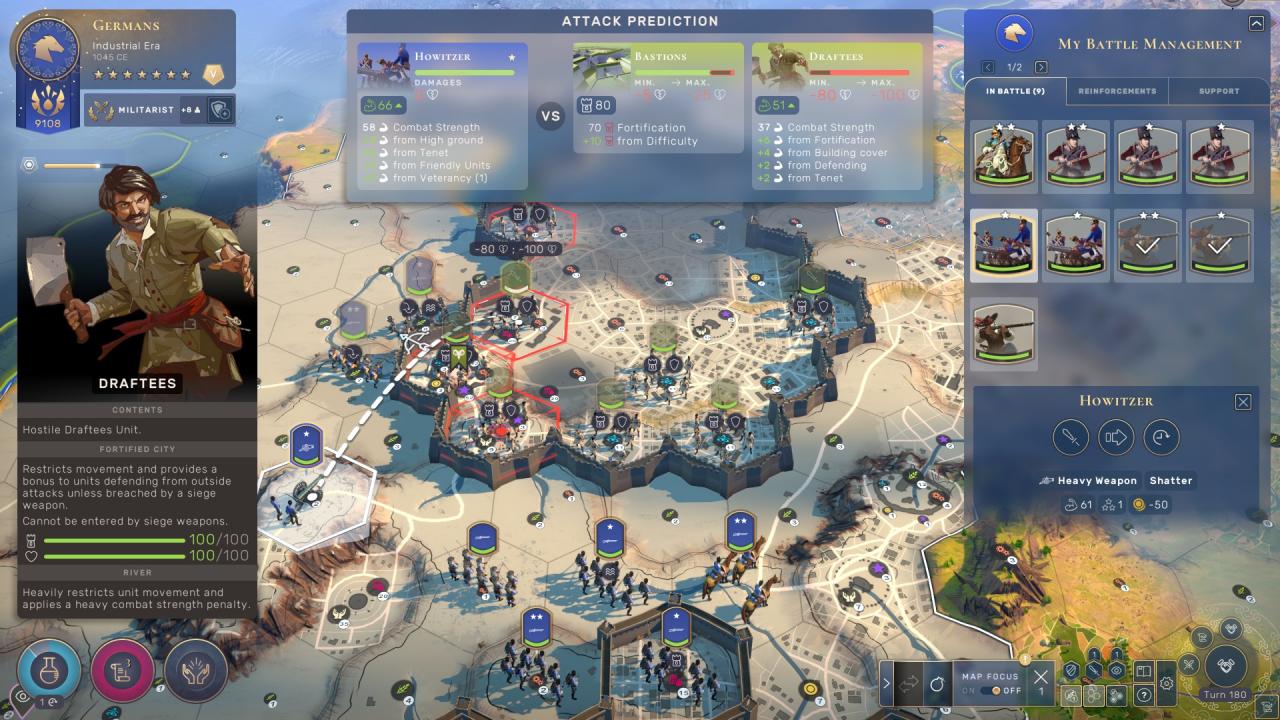 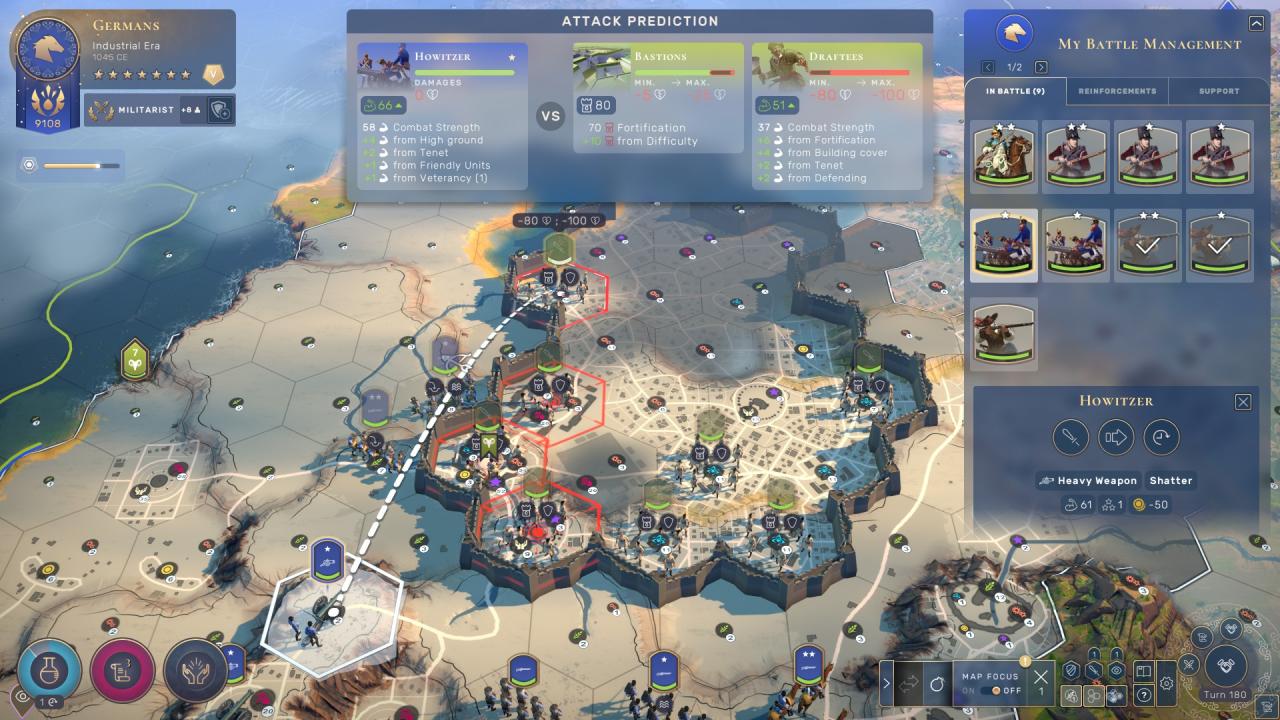 In this example, the howitzer is in a very high position.. On 2 (!) steps above many enemy units. Therefore, on the first screen, she can shoot through one enemy squad. Or through all the other units on the second screen.

All possible targets are highlighted with a red frame. 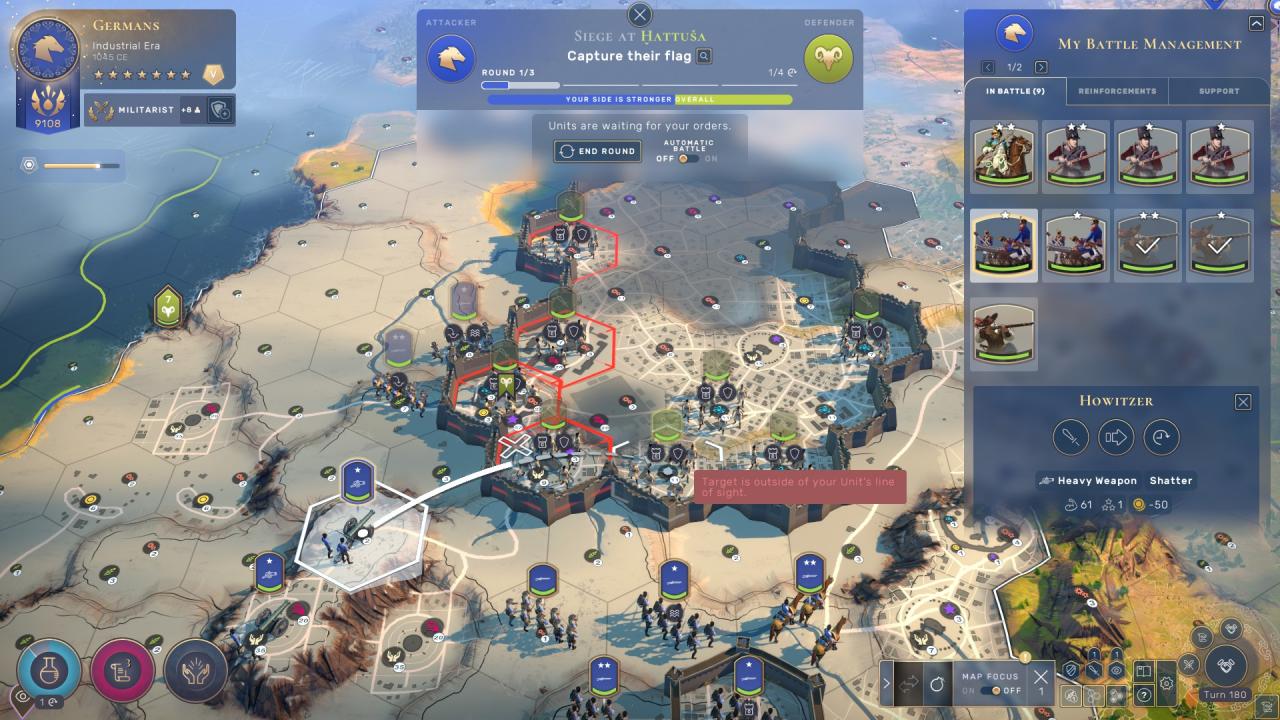 And here the howitzer cannot shoot, apparently the closest enemy squad is in the way, which is the lowest on 1 step.

The howitzer behind the first is in an unfortunate position.. The first one closes the second view. But if you take it away, it will turn out like this: 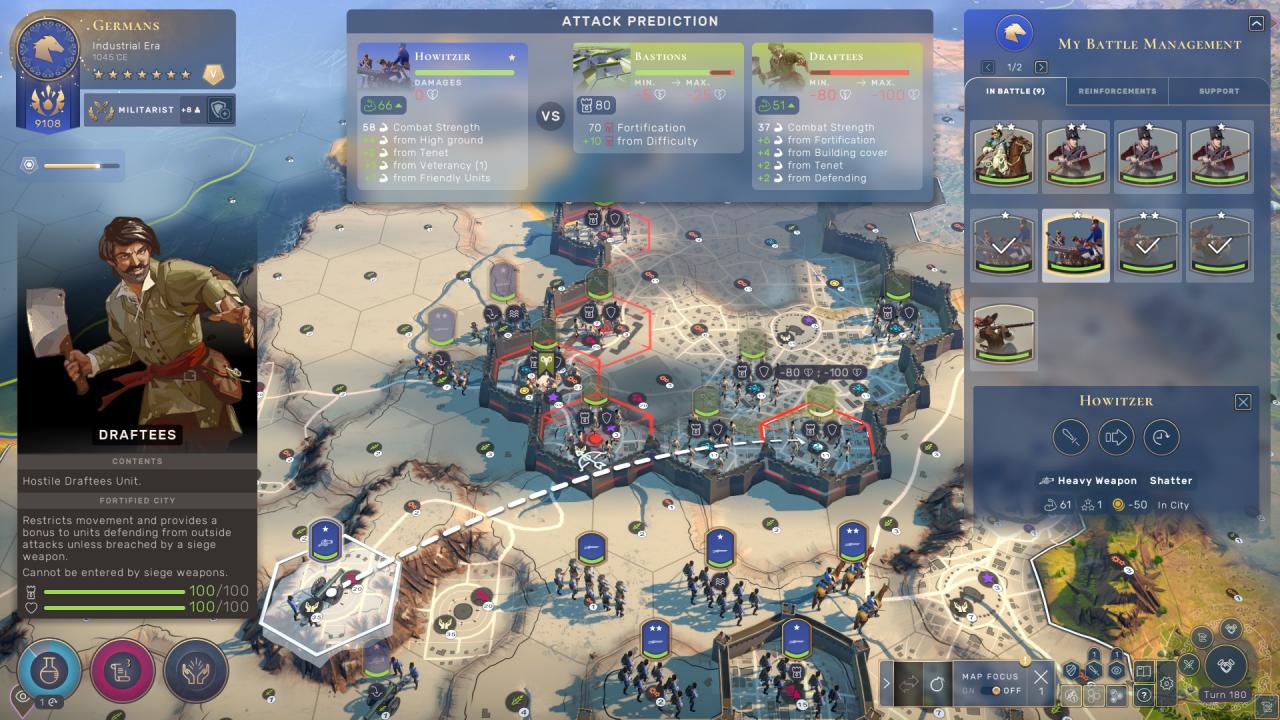 Likewise for line infantry, if you remove a unit from the first line, then you can shoot, and before that, his detachment in front of the view was closed. And the red frame shows that there is only 1 accessible target: 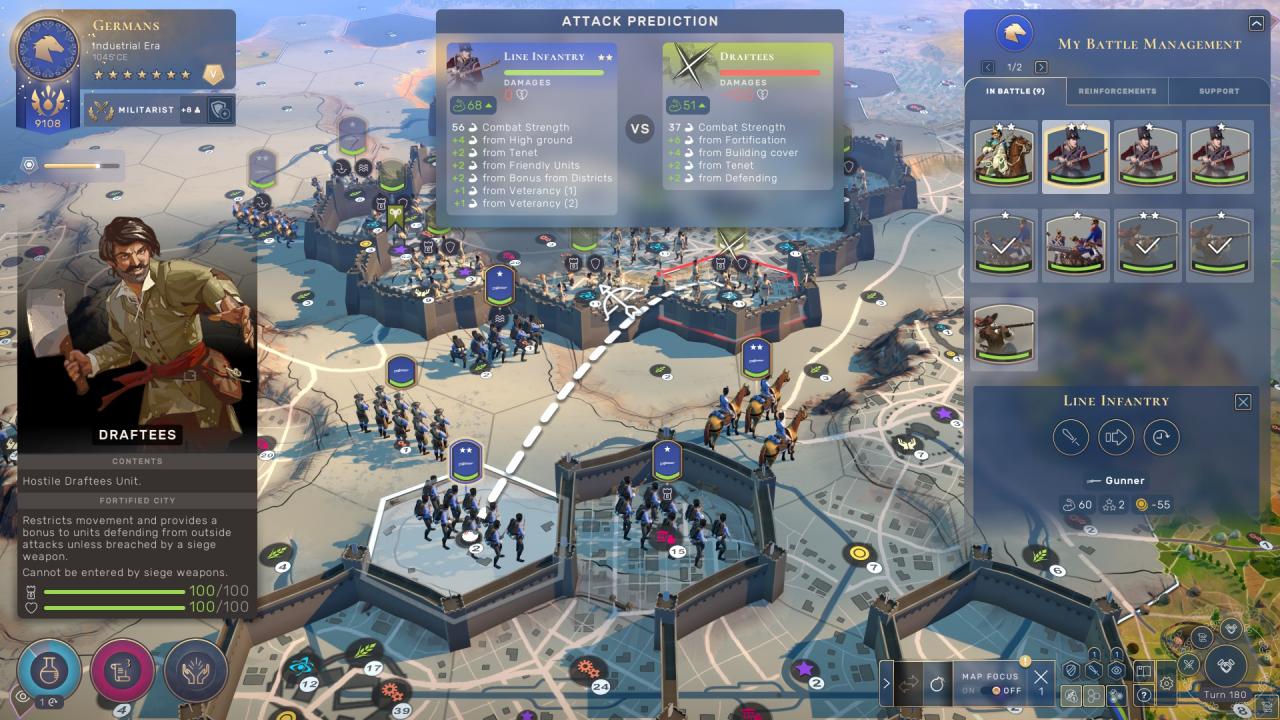 Here's another example, as your squad, worth only 1 a step below, obscures the view for the howitzer, but the squad that is lower by 2 steps – does not close: 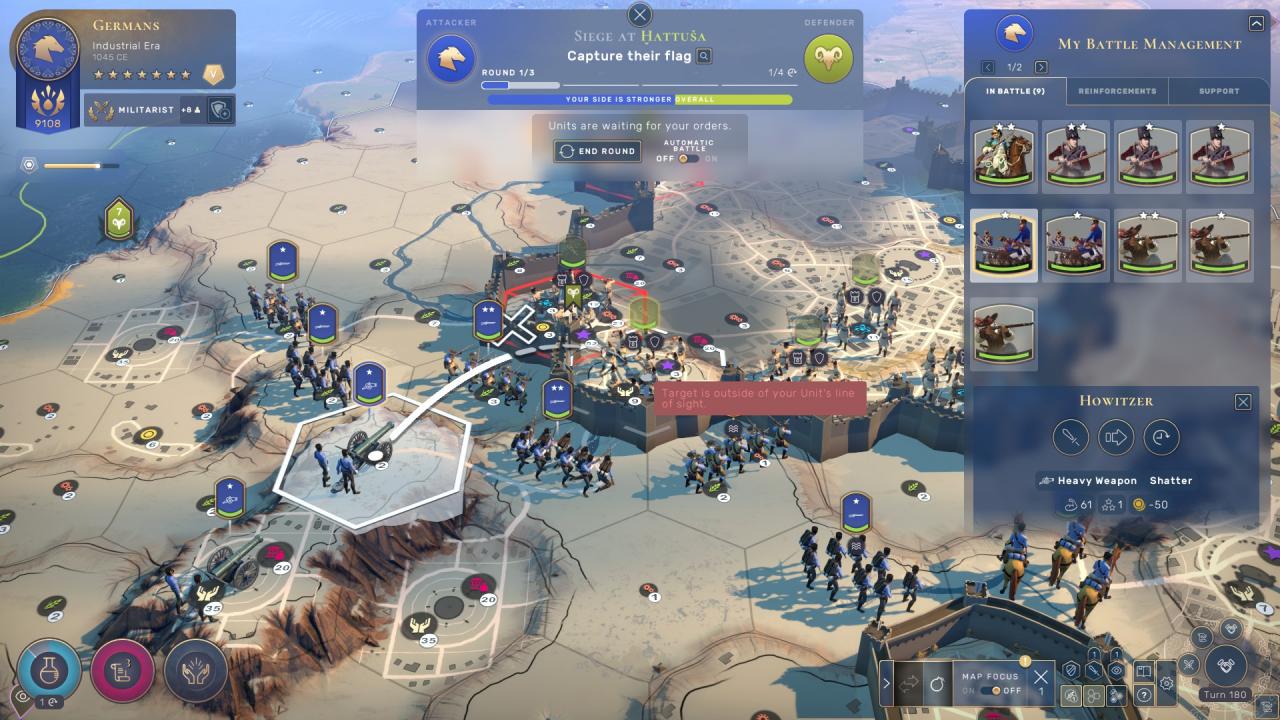 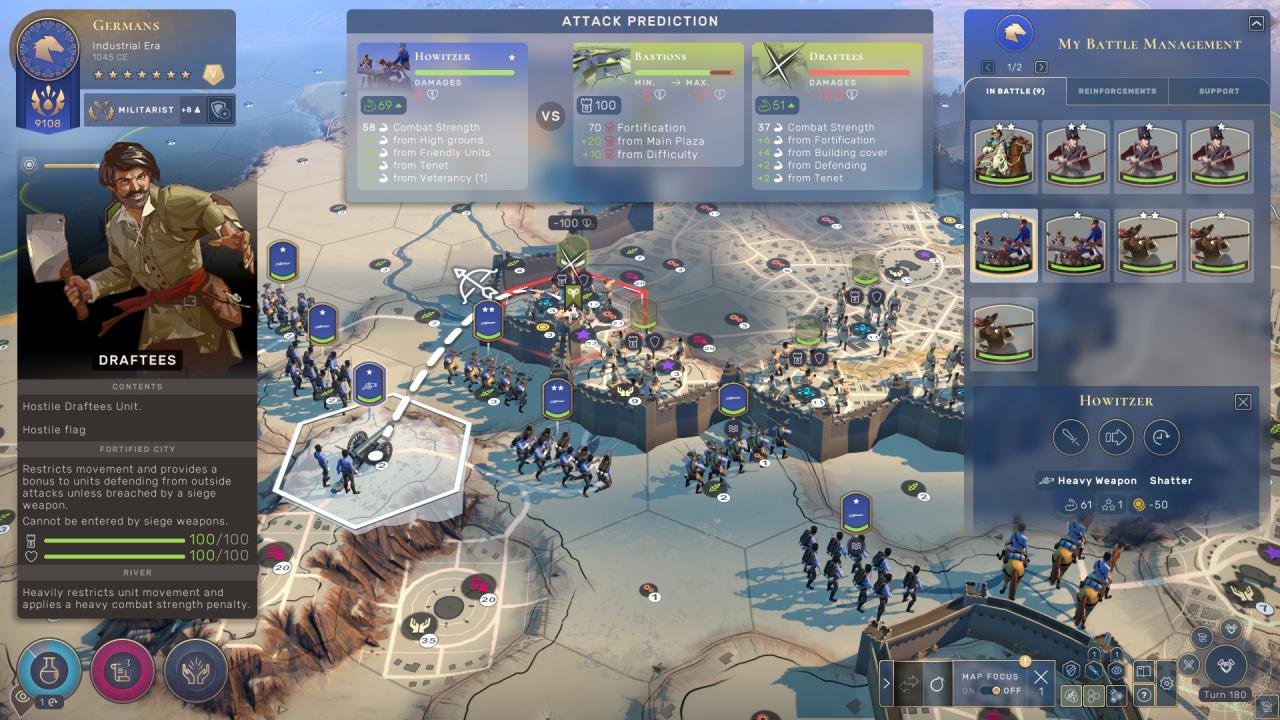 And another example for two guns, installed in different positions: 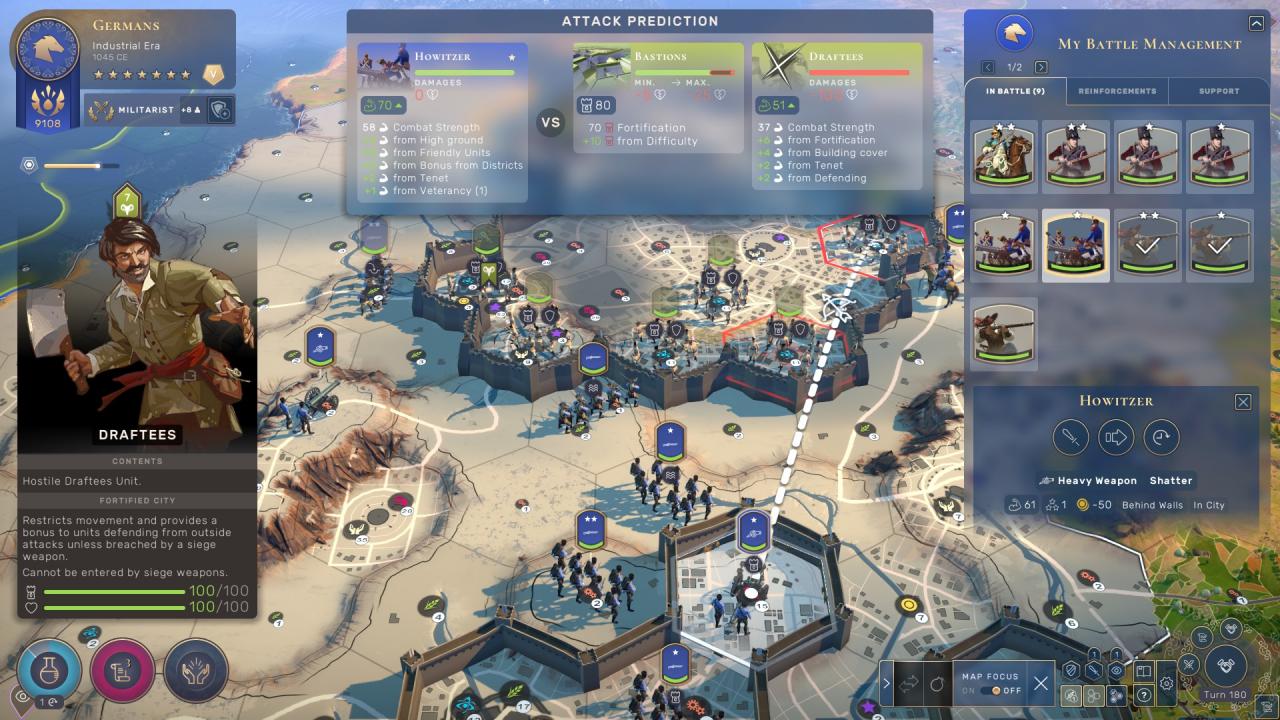 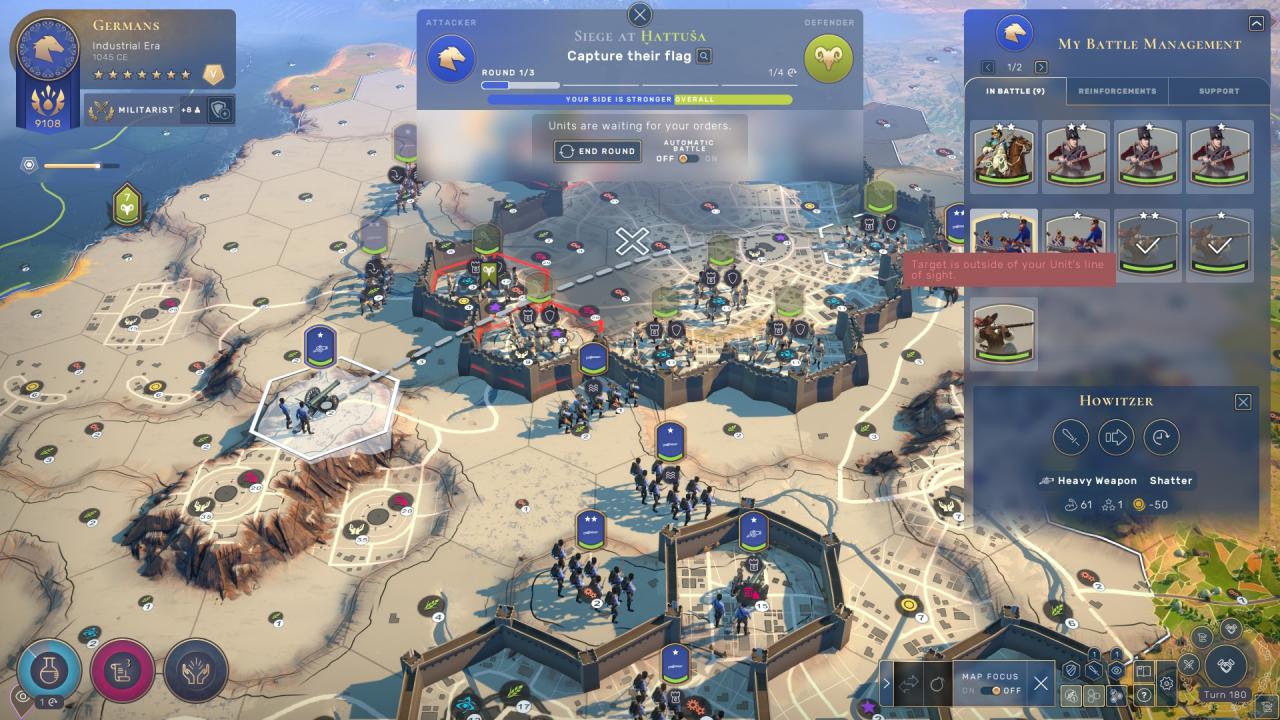 Line of sight may be obscured:

None of the examples above had forests, but with them also. And how exactly hills can block the view – I completely missed the above.

To break the obstacle ahead, it is required to fire while on 2 steps above the obstacle. And by the way, this is not always possible at all..

There is an easy way for the attacking side, how to increase the likelihood of using rifle units in the first turn of the battle:

– install them on the second line
– but don't put anyone on the first
– in this case, they can be the first to fire a salvo
– after which other units will be able to cover them before, how the enemy can attack them

Strengthening: +6 (given to a unit in defense on an unbroken wall against a unit behind a wall)
Height: +4 (compared to the one who is lower)
Blow to the rear: +4 (attacking squad, if there is already a squad on the opposite side)
Crossing the river: -3 (detachment on the river)
Protection: +2 (detachment, who did not attack on his turn, also given to all units of the defender on the first turn of the battle)

Shelter: +4 (usually to a detachment in the forest during shelling, or among buildings)
No visibility zone: -4 (some riflemen can shoot, but get fined)

Below is another list of bonuses for unique units..

Damage depends on the difference in the final strength of the units (with all bonuses).

The preponderance of power on 4 units gives you damage 25..35 (average 30), and losses 5..25 (average 15). Moreover 5..25 this is the smallest damage, which squad can carry. Ie pieces 6 the weakest units can kill 1 tank, although everyone will die at the same time (if not rifle).

The preponderance of power on 16+ units – this is the killing of the enemy with one hit / shot.