This guide contains original entries from Casey's magazine in Kaycee's Mod, which the player receives as they progress through each stage of the challenge, as well as their free translation – before the release of the official localization of the add-on.

The add-on provides the player with an endless game mode with Leshim, that is, the repeating first act of the game. However, in this mode, new content has already been added. Firstly, the player does not have access to items, making it easier to play in the first act, eg, squirrel head for totem, as well as an additional candle of life, improved map “Smoke” and posthumous cards of applicants. Secondly, card balance changed, and in the future it will change further: eg, the Moon card can no longer be killed with Cobra or other poisonous cards. Thirdly, game mode offers a random order of the regions the player passes through, new maps, missing in the base game, modifiers, complicating the game and allowing you to pass the so-called “Testing” (Challenges), as well as a new boss, Leshy's dialogues and stuff.

However, the most interesting for us is the piece of lore added to this mode in the form 12 Casey Hobbs Journal Entries, the developer of the digital version of the card game “Inscryption”, according to the inner lore of the world. This manual describes the contents of the journal entries in the original language., and also in my free translation.

At the time of writing the first version of this guide, the new game mode has version 0.19, therefore, the notes from Casey's journal have not yet reached the stage of official translation, and, Moreover, so far in the game there is only 4 of 12 records, and the rest are replaced with a stub. This guide will be updated as updates for Kaycee's Mod are released.. In the future, the Russian-language text may be replaced by an official translation, if such is produced.

NOTE: In some places I had to translate softer, so as not to block the leadership. not sure, that it will not be blocked for the original, but nonetheless.

OK I need to write this down NOW so I don”t go to sleep and tell myself I dreamt it.

I”m working late and testing the latest build and out of nowhere The Angler starts FREAKING OUT. Like he pulled something up out of the river with his hook then he GETS UP and WALKS. There is no walk animation for this character! W**?! He walked right into the cabin. I followed him in and couldn”t find him. Leshy had some new dialogue lines that I CANNOT FIND IN THE DIALOGUE FILE. He said something about some “OLD_DATA” and how The Angler served him well or something.

I”m so tired that I”m already wondering if I made this up. 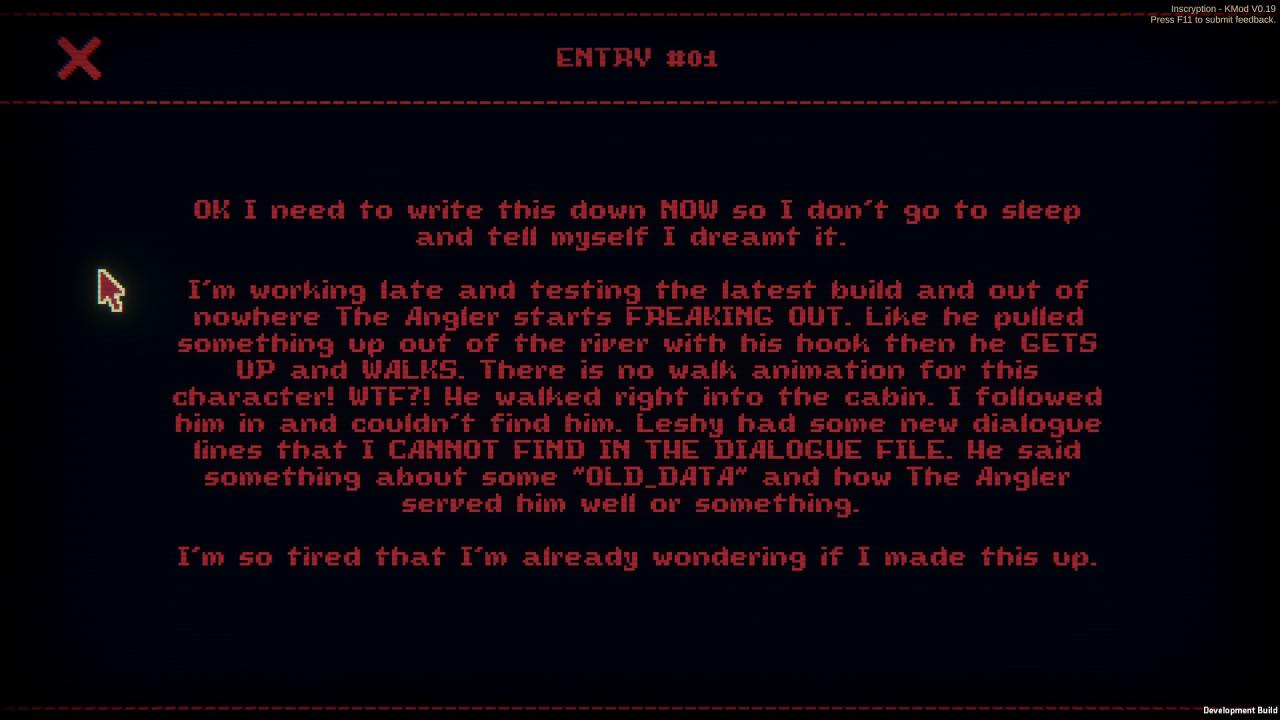 SO, I urgently need to write it all down, until I fell asleep and convinced myself, that I dreamed everything.

I worked late today, tested the latest build of the game, and suddenly with Rybak SOMETHING FUCKING STARTED. He suddenly caught something in the river, pulled the line out of the water, and then got up and left. Yes, there is no walking animation for this character at all! WHAT?! He went straight to the hut. I followed him, but there was no Rybak inside. But Leshy has some new replicas, but I COULD NOT FIND THEM IN THE FILE WITH THE TEXT OF DIALOGUES. He seemed to say something about some “OLD_DATA” and about that, that Rybak did a nice job.

I am so tired, I already doubt, didn’t you invent everything yourself?.

So I woke up and damn near lost my mind. I tried to recreate that bug with The Angler over and over and nothing weird was happening. Then I realized I was testing on a different disk! So I popped in the same disk as last night and HOLY ****. Leshy went 3D. What does that mean? I barely even know. Maybe I AM crazy. The entire game is different. Leshy took over and it’s 3D. I don’t know anyone who would listen to me about this.

I woke up and almost lost my mind. I tried to recreate the Rybak bug over and over again., but nothing strange happened. And then I realized: I tested the game from another floppy disk! And then I inserted the same floppy disk, as last night, and there – YOUR SAME MOTHER! Goblin became three-dimensional. What does that even mean? I don't understand anything at all. Can, something is wrong with me? Everything has changed in the game. Now Leshy was in charge, and the whole game – in 3D. And I don’t even have anyone to tell about it.

I”ve been playing this “new” Inscryption now for a few days. Work has been unproductive. I emailed some of the other devs – kinda probing to see if they know anything about this without appearing crazy. Does not say.

The strange thing? The game is fun. Like it”s actually a good game. But stranger still? Leshy. He talks to the Challenger almost as if he”s talking to ME. It”s freaky but not altogether unwelcome – I could use a friend.

I've been playing this game for several days now. “new” Inscryption version. Work is not going anywhere anymore. I tactfully asked other developers through the mail, tried to somehow gently probe the soil: what if they know something about it. All is unsuccessful.

You know, what is weird? The game is fun. She is very good. But even more strange is the behavior of Leshy. He speaks to the Applicant as if he is actually speaking to ME. It's a little scary, but in general, I'm not really against. Finally, I could use a friend.

I scoured the disk last night looking for some kind of explanation. And I found some really wild stuff. It made me think… what is the OLD_DATA and why does Leshy only talk about it when he”s wearing The Woodcarver”s mask?

I found some log from Mr. Kaminski. It was pretty clear when I met him that the guy had issues… but he seemed to be saying in this log that the entire development of Inscryption was a cover. For what? How infuriating if true.

Time to start another run I guess.

Last night I rummaged through the entire floppy disk in search of at least some explanation. And I found wild things on it. After that I had to think… What are these same “OLD_DATA”? And why does Leshy speak about them only when he puts on the Carver's mask?

I found Mr. Kaminsky's tapes. When we saw him, it seemed to me so, that he doesn't have everything at home… but, in these records he, seem to be, talks about, what “Inscryption” it's just a cover for something more. And what for? If it's true, then I'm just beside myself with rage.

It seems, it's time to play one more time.

All other parts of the log contain the same stub:
<DATA IN BETA STATE. FOR ANY QUALITY CONCERNS PLEASE CONTACT KAMINSKI DATA STORAGE MFG.>Seems to be, new entries will appear in the journal with the release of new versions of the add-on, and after that the guide will continue.
From SilvanD