A guide describing how to get each achievement in the game.

EVERYTHING: Write a NORMAL foreword

Achievements are presented in order of percentage of availability in General Game Statistics:
https://steamcommunity.com/stats/1092790/achievements
and grouped by acts.
That is, at the top of the achievement, which most people got, and below are rare achievements, which few people received.

Information related to the lore of the game went under the spoiler.

P.S. Ermine stupid K0NCH and just a moron! This is AXIOM!
P.P.S. Moderators, do not ban yawn UwU

Well, maybe not very story-driven achievement (in the first wound I got to Rybolov, but it was DEPARTED in full).
Die for the first time.
You will definitely succeed!

Subject.
After the first(or second) death Govnostay (later you will understand why this is so) will say, that the previous Applicant wrote something in the book. The code from the safe will be written there., open the safe, take a card.

Subject.
Cm. Harmless insect.
In addition to the card, there is a key in the safe.
Use the key to open the cabinet with the keyhole.
Cabinet drawers can be opened, solving puzzles with sliders on them.
There are no screenshots with the answer, so just poke)
In the lower left drawer there will be a card of a wolf in a cage, take her.
During the next battle, the enemy must destroy the cage.

Subject. Just kill the third boss, Hunter and Shopkeeper rolled into one.

Subject.
Cm. Unleash the menagerie.
Return to the closet after the fight.. To his left there will be a figurine of a wolf and bars from the cage. Take a figure.
Go to the door. To the left of it there will be a mechanism with a squirrel and a dagger..
Insert the wolf shape into the left slot next to the squirrel.
The squirrel will release the dagger. Take the dagger.
In any battle (except for the final one with Leshim) use a dagger. You will SUDDENLY fail to see..
After the battle, Leshy will offer you the services of an ophthalmologist.
Take the upper left eye in LGBT-backlit.

Will you dare attack the moon?

Subject. Defeat the final boss of the first act, Leshego.
Use the Ouroboros, poison or some kind of laser gun.

After a boss fight or when exchanging a gold skin, the shopkeeper has the opportunity to pick up such a rare card as Amalgam. Amalgam belongs to all types of animals.
Let the Amalgam do the damage, after which you will be awarded a victory.

During the trip, Mycologists may meet on the map. They can stack the attack and HP of two cards of the same card. (e.g.: wolf and wolfhound – it is forbidden; wolf cub with attack 3 and a wolf cub with a flight symbol – can).
Conduct two experiments and your achievement:
First, by connecting two simple cards. (For example, two wolves)
Second, by connecting the resulting mutant card with a card of the same type. (for example, map from the past experiment and the wolf cub).
Can connect two mutants, but why?

After the victory (or defeat, I do not remember exactly) there will be a hook hanging over the Fisherman in your starting inventory. Save it before the Fisherman fight.
During the fight, have the Fisherman pull one of your creatures towards him. And you, in turn, will pull the same creature back to you.

After defeating Leshim, go to the main menu and start a new game.

There are two different pieces of broken Obol in the necro card deck.
Challenge these two cards in another battle.
You will receive the Antique Obol.
Take the Ancient Obol to the Crypt on the Lower Floor.
There will be a coffin with red eyes on the floor.
Make an offering to the coffin.

Collect all cards.
Open several packs of each deck, defeat all bosses and don't forget to open chests. Ouroboros can be bought at Leshego's Hut. Yet 4 cards can be crafted using Mycologists (small building on the right in the middle on the global map). Get another card after completing the achievement Dark Offering.

Tentacle: There is a pier on the global map to the left of the goblin, a tentacle will appear on this dock just above the bridge, click on it, so that it disappears into the water. The second tentacle will be on the third floor of the Temple of the Magic in the bathroom, click on it too.

Subject. Defeat the Photographer. On the map is located in the same place, where was the goblin.

Subject. Defeat the Archivist. On the map is located in the same place, where was Grimora.

Subject. Defeat an unfinished boss. On the map is located in the same place, where was the magnificus.

Subject. Defeat 0panki. On the map is located in the same place, where was K0NCH.

AHAHA. JUST LOOK AT THIS MOON! 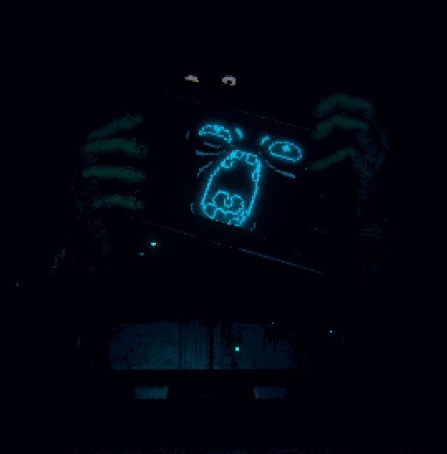 Cm. Joint onslaught and Dark Offering.
As the game progresses, you can discover hidden locations. Arrows in such locations are displayed only when you hover over them.. So go all over the map, hovering over all four sides. There are INTERACTIVE traps in four of these locations, bunnies jump over. Kill them all for skins.. The fifth skin is sold in the store.

There is a castle in the crypt of the Archivist, which can be opened with the key from the previous act. Open up.
Further in the factory area there is another castle. Open it too.

After obtaining all the skins, leave the table. Turn left. The door will be open. This room will contain the Shopkeeper. For each skin she will reveal a piece of Inscryption lore. There are five pieces in total, like skins. Uncover all the pieces.
Grim Bounty

Lots of money = lots of stars.
Make a lot of money. Three stars will appear above you.
Defeat any bandit, as long as there are three stars above you.

During the battle with the Archivist, you will be prompted to select the old file.
Select any file. You will be told, that when this map is destroyed, the file will be deleted.
The file will not be deleted. So destroy the map.
In folder, where was the file, another one will appear, with the same name and postscript DELETED

Least… i tried to delete it. But, apparently, my file ACCESS alone is not enough.
The rules have been negotiated, so you have to observe them. Delete this file yourself.
Show some respect for the established rules. You are welcome.

Delete the original file.
After defeating the Archivist, you will be given the achievement.
Recover the file.

P.S. If you have folder C:\WindowsWinSxS, DO NOT CLICK IT IN ANY CASE! SERIOUSLY!