Everyone is healthy,this is my first guide!
Here are collected all Easter eggs and references I met in the game Terraria.

True Excalibur,Excalibur and Enchanted sword-these 3 sword
are a direct reference to the legendary sword of King Arthur.

Gungnir-in Norse mythology
Gungnir was the weapon of the Allfather Odin.

Bladed Glove-in film “Nightmare on Vyazov Street”,
the antagonist had a similar glove.

Officer-projectile weapon
heads of cats with a rainbow train,
which in turn look like
meme-internet hero-nyan cat.

Destroyer blade-weapons in their appearance are very similar to
with Buster's sword from the game “Final Fantasy XII”.

Light disc-reference to “Throne”.
I do not know,What more i can say,I haven't watched the movie.

Fire flower-in a series of games “Mario” there was an improvement in the form
orange flower,which is the same
made it possible to release fireballs.

Arkalis-named after developer Arkhalis.
Also the sword mechanics are similar to crissaegrim from the game. “Castlevania: Symphony of the Night”.
As for me, it is also similar to the Diamond Sword from the game “Minecraft”.

Guitar ax-as well as “Plant”
is a reference to a metal band “Pantera”.

Frostmourne-the sword is currently removed from the game,
however, it can still be found in files.
to the weapon of the Lich King from the universe of the game “Warcraft”.

Hair and Hair shower-reference to anime “Soul Eater”.
These weapons have also been removed from the game..

Ogribator-reference to foreign
comics “The Legend of Maxx”.

Zapinator-is a reference to (Zapper)-y.Pistol,electronic light weapon,sold bundled with Nintendo Entertainment System and Nintendo Famicom. The Zapper allowed players to point it at the TV and shoot at various targets.,then this is a reference to the joystick pistol for “Duck Hunt”.

S.D.M.G-its appearance and description refers to
on the game “Edge of Space“,which is very similar to Terrari.

Trim-in english version,the description contains the phrase “This is my boom-stick!”-
(“This is my boom stick!”),this is a reference to the main character of the film
“Evil Dead 3: Dark army”.

Falcon sword and Pirate staff-these weapons are a reference to another game
from the Terraria developers “Re-logic”,to the game-Pixel Piracy.
However, I myself am not sure of this..

Uh…on the weapon everything. Go to the Bosses… 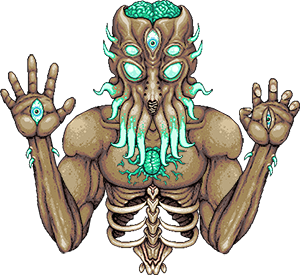 Eye of Cthulhu,Brain of Cthulhu and Moon Lord-all of these bosses are direct references to the fictional deity Howard Phillips Lovecraft-Cthulhu.,the fact that Cthulhu has its own cult,which is very similar to cultists,after the murder of which awakens A lunatic cultist,and after the tower and only then Moon Lord.

Eater of Worlds-they say,that this boss is the spine of the Moon Lord,which is quite plausible considering,the fact that almost all pre-hardmode bosses are considered to be body parts of the Moon Lord.
Maybe it's true,but maybe not,don't take it for 100% fact

Wyvern-in anime “Spirited Away”,
one of the heroes could turn into a similar dragon.,by the way,the only anime I've watched.

Krampus-do not think,what needs to be explained here,who is this,because Krampus is a pretty popular monster,I'll tell you briefly:Krampus - a legendary figure in the folklore of the Alpine region. Krampus accompanies St.. Nicholas, punishing naughty children and scaring them, - thereby, he acts as a counterbalance to the saint, who gives gifts to good children. They say, that when Krampus finds a naughty child, he puts it in his bag and takes the frightened child into the cave, presumably to eat for christmas dinner. In older versions of the legends, Krampus kidnaps children and takes them to his eerie castle., and then dumps into the sea.

Sand shark-movie reference “Sand sharks”,
where the plot revolves around these sharks.

Lizards-looks very similar to
the Silurian race from the series “Doctor Who”.

Gold: worm,Grasshopper,butterfly,bird,squirrel and rabbit-all these creatures possibly refer to the golden monsters from “Pokemon”,which are also distinguished by their rarity and coloring.

Tim-his name is a reference to “Tim the Enchanter”
(“Tim Wizard”) from the movie “Monty Python and the Holy Grail”.

Stream Invader-in some scenes of the film
“Skyline” a similar creature appeared.

Martian walker-a reference to the novel “War of the Worlds”,
in the novel, the Martians used similar means of transportation.

Right now I'll just list all the mobs from the event “Solar eclipse”.The wiki doesn't say anything about them., and I have such a feeling as if I was wasting my time…

A creature from the depths-horror movie reference
“Black Lagoon Thing” (1954).

That's all for now…