Step by step instructions for building a house, in which all residents have the most optimized routes. All machines are available.
In this guide, I tried to count everything to the last stone, so you will know for sure, how many resources do you need.
Attention everything is calculated for approximately standard residents with a small margin, on this if you have 24 gluttonous resident, you will need a little more food or space at the table if they are ascetics. (Or other features and deviations).

so, in our building
If that at the end summed up the total amounts, so you don't have to count yourself.

Next, you need to decide which basic material for the building to use.

To begin with, we need to find a place on the map where there will be nearby iron and land suitable for plowing, salt if possible, limestone, coal and clay. The most important, that the base has dimensions 28 on 28 smooth, for, so as not to count it manually, just make a warehouse of the appropriate size and remove all permissions from it, then it will be just a convenient markup.

so, after we have found a place we make a markup. 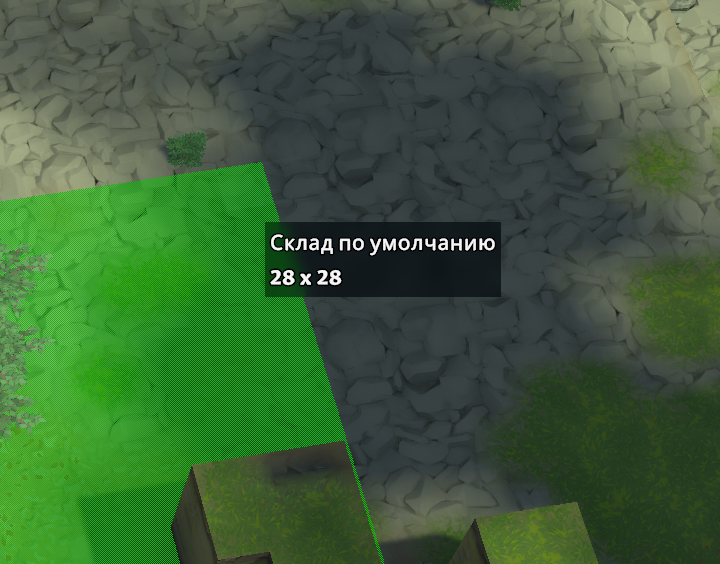 Don't forget to clean everything 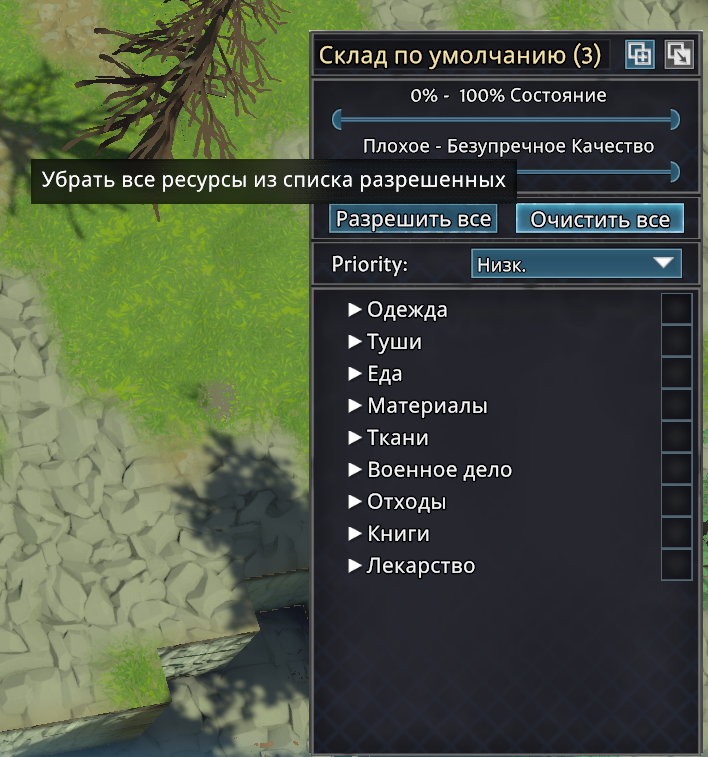 .
Further, take a look at the diagram.

There is no point in looking especially closely now, we mostly need her, to align the walls correctly.

Building base and furniture

We have a field 28 on 28, we will start from the upper left corner. 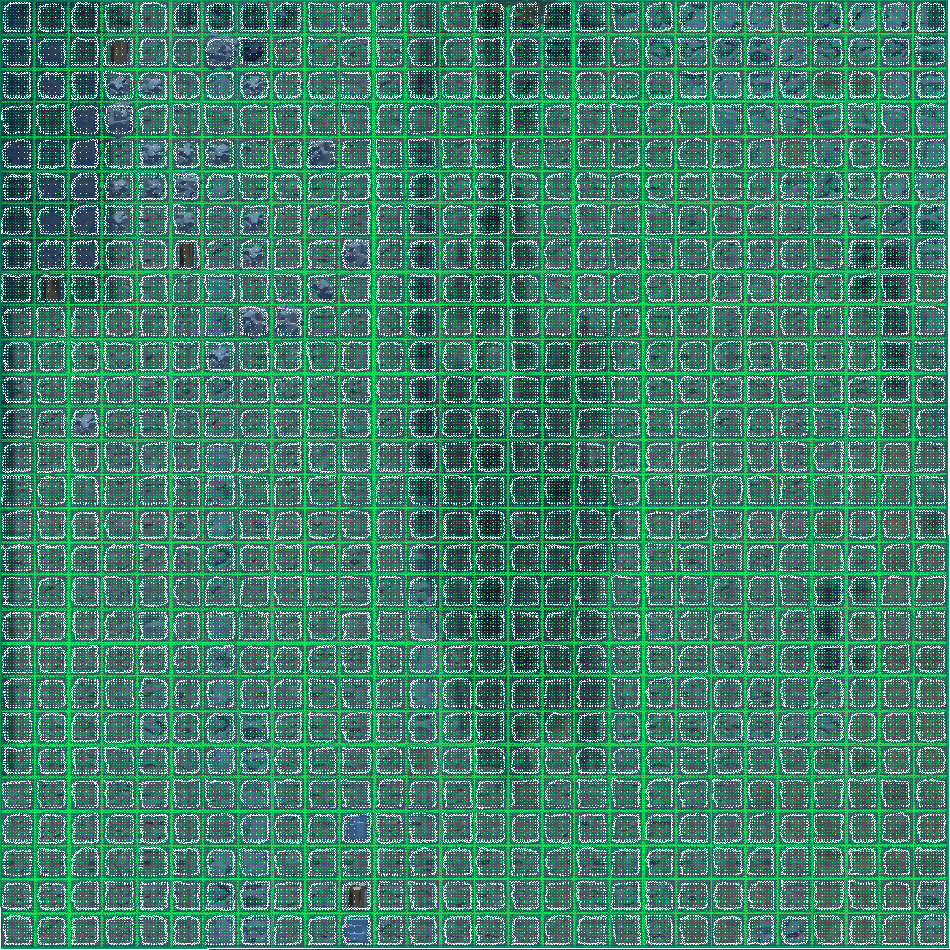 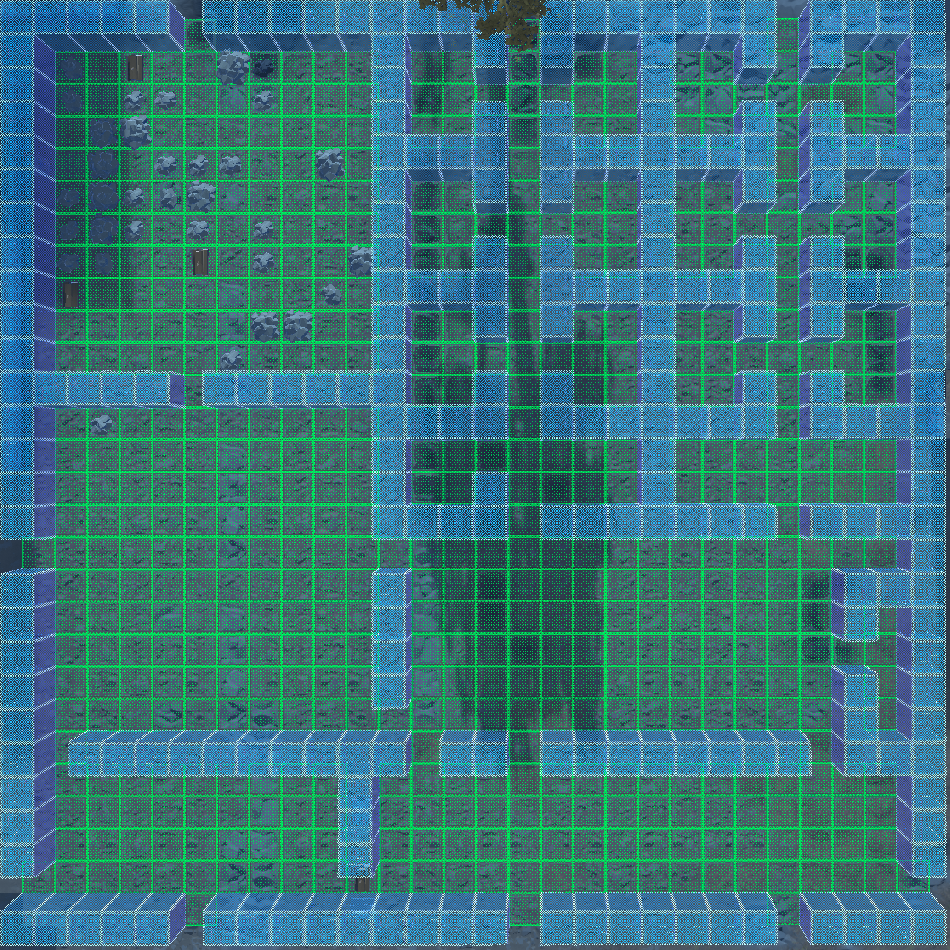 Add doors, stairs and non-load-bearing walls, she's the only one between the library and the kitchen.

If not clear, what is where, you can look at the diagram from the previous section)
We put the next floor of the walls, this must be done before, how to mark the floors, to save about five hundred resources.
Attention, I put some extra windows for beauty, they are not required there, if you want to repeat it will add 119 units of corresponding resources. 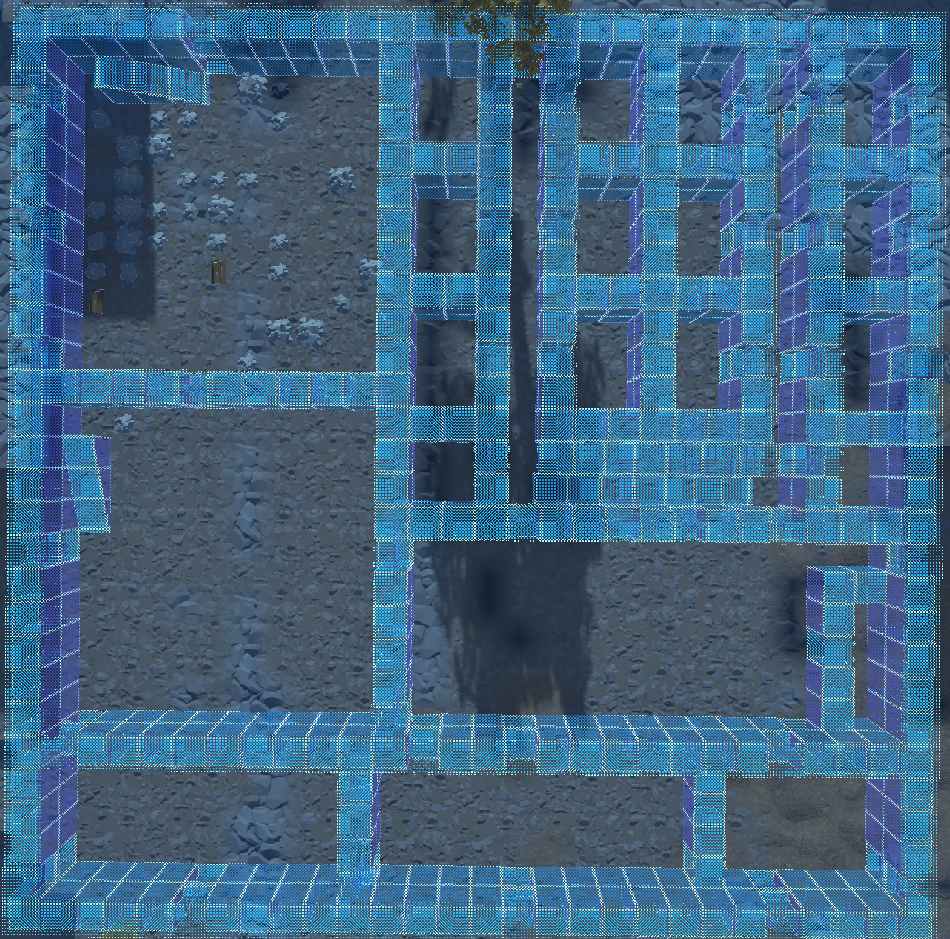 We are waiting for everyone to build
Advice, do not guide save with maximum difficulty in survival mode, I tried to finish this stage for a year and a half due to constant raids) 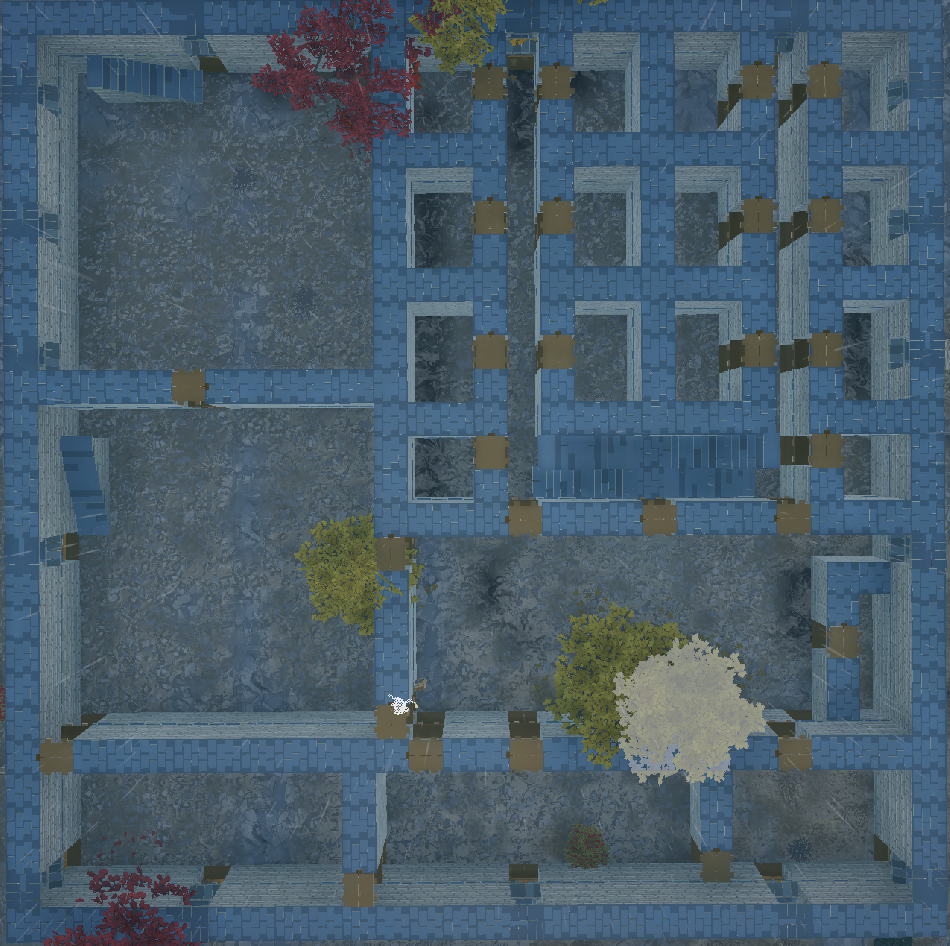 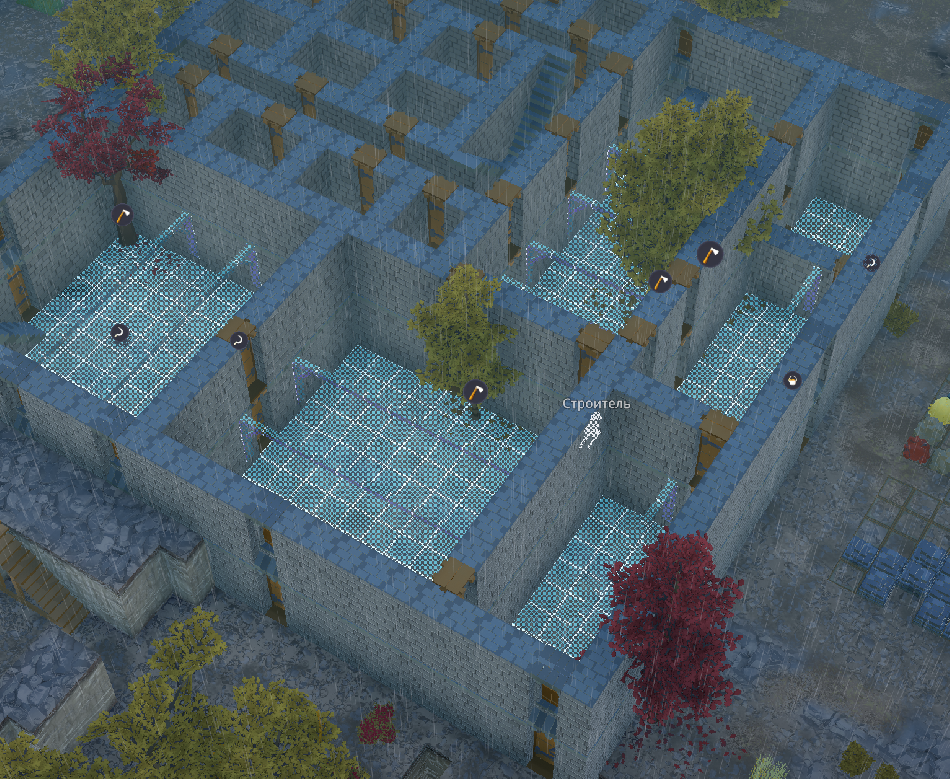 Second floor beams as in the picture 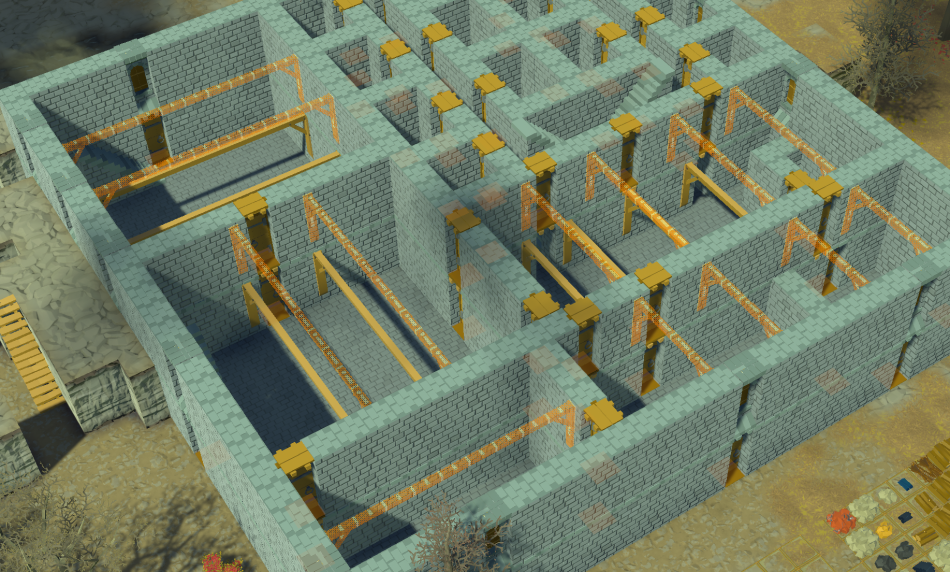 And we cover everything with floors at once the second floor and the roof
The base is ready, we fill the floors with furniture. 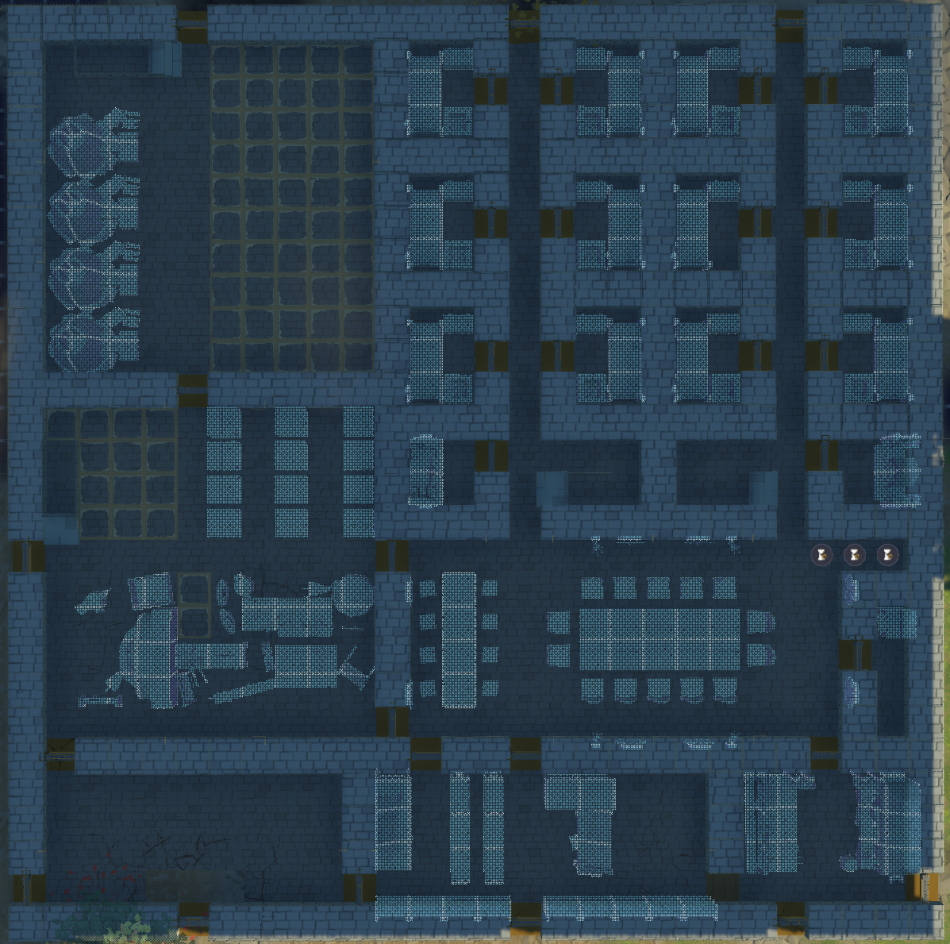 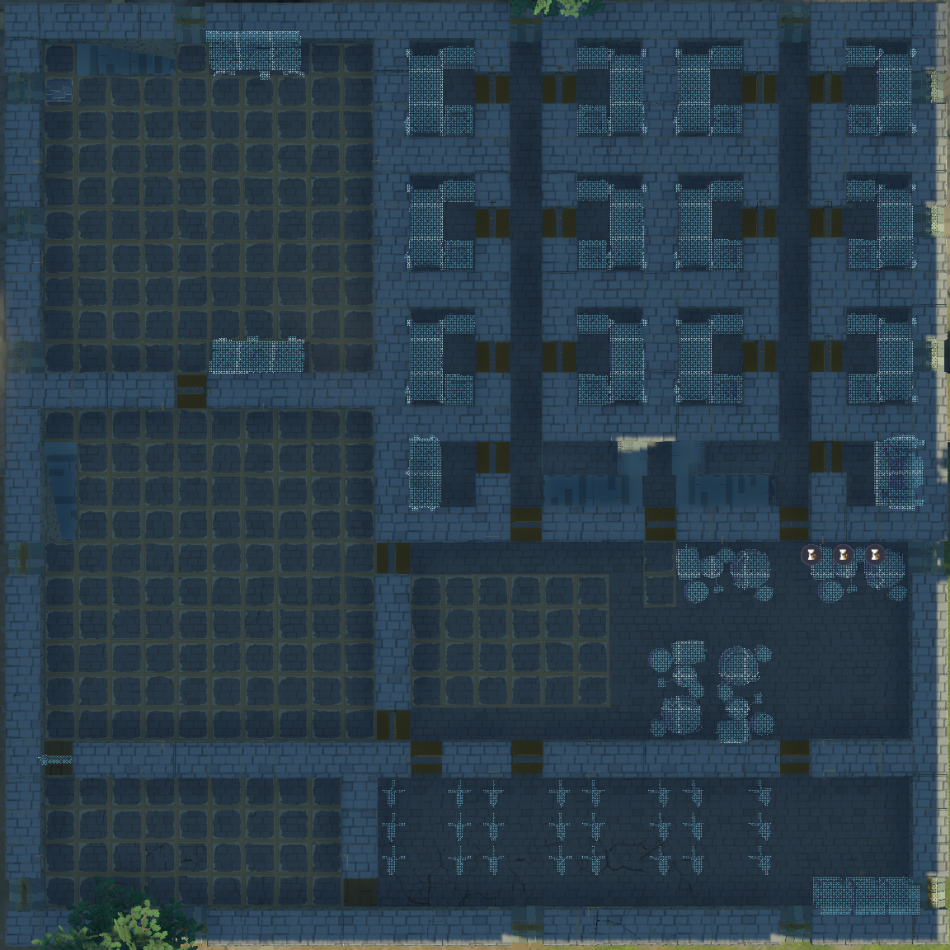 At the time of the creation of the guide, I was missing some technology, but let me remind, mint is the doctor's table, but 3 on 3 yellow is a distiller. The rest of the space you yourself can think of where to define.

Warehouse on the ground floor in a room with smelters, leave it just for coal, pellets and iron (possibly gold ore). Yes, iron fits perfectly, so that the settlers have something to train on, but it really costs you almost nothing to melt everything into steel and make products from it (except for specific crafts).
[Set priority high]
In the workshop you need to keep 2 place for coal, between the armored man and the forge and precisely between them, because the archer and seamstress don't use it, behind the armor there are shelves for fabrics, and in the corner under the stairs fold all the steel, which you will find. Ditto if you think, that the seamstress works more often than the armorer, you can change their location to mirror, that is like this. The productivity of the seamstress and archer will be increased, but the armored man will run a little longer before they began to run. 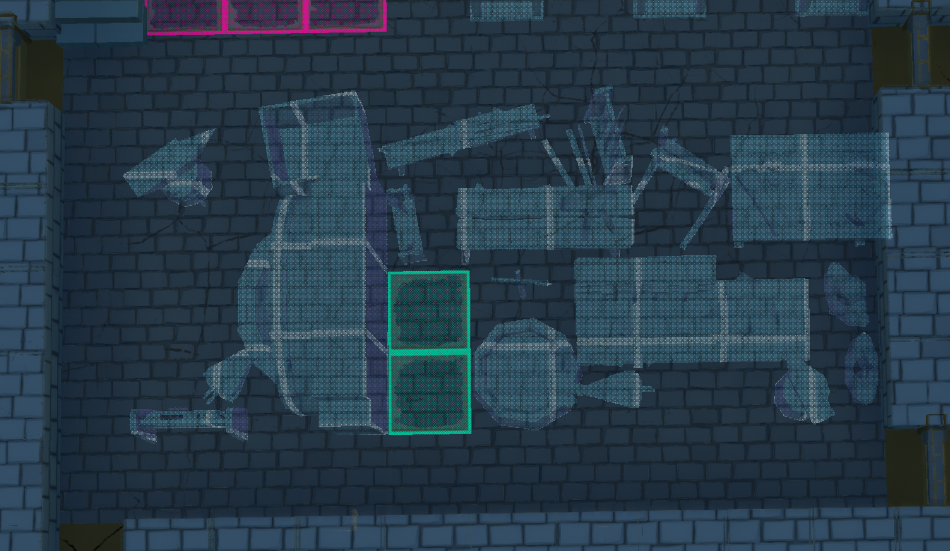 [Set priority high]
In library, bookshelves 18 PC, along the wall, between tables and on the wall near the workbench 1 lvl, you can put them there, though the texture will overlap a little
[Give priority to the highest]
To the left of the large hall and on top of the kitchen there is a small nook, with one shelf and two storage cells, shelf for a lush meal, and put beer in the warehouse, it is imperative, so that your settlers don't run to the basement for food, every morning, and then back to the main hall. The food there will spoil very slowly., and if it does go bad it will be a small part (Each settler has 2 pieces of food per day consumes, this is 200 nutritional value, so this warehouse will be updated regularly, if you have at least 10 settlers).
[Give priority to the highest]
Each settler room has a chest, remove military affairs from there, leave only summer and winter clothes. (That is, at the only moment there should be, for example, a hat and a winter, or hat and summer, since there are two places).
[Set priority high]
On the second floor above the smelters, stack the clay, limestone lime blocks and bricks, as well as a pellet, gold, silver, silver and mechanical parts
[Set priority to low]
On the second floor above the workshop, fold, iron ingots, steel ingots, gold bars, fabrics, timber, straw, sickness. You can also throw military affairs and clothes from fallen enemies there., to melt.
[Set priority to low]
In the brewery room, two storage cells for coal and a storage for barley, in the future, it is better to make shelves for barley there, but only if he suddenly stops climbing.
[Set priority high]
Above the library are 24 armor stands, very useful at the time of the attack. Display only armor there and choose a specific set of armor, which the settlers now use and also limit the quality at the lower border. If you don't want to control it yourself, you can set the mode of melting any armor in the forge whose condition is lower 80%, and prohibit racks to keep armor less 80%, then set the mode in the forge “maintain the number” eg 24 plate armor, thereby, your settlers will always have as much armor as possible and you will not miss the moment with the need for repair
By the way, what is the impact of the margin of safety of the armor and how to make steel armor and other items, you can take a look in my other guide 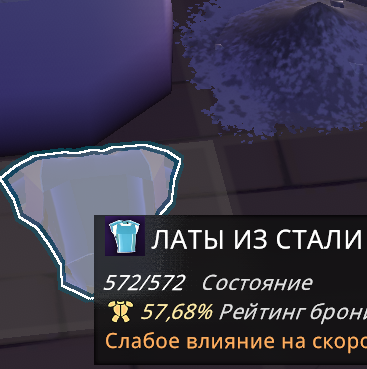 Crafting steel items
A Guide to Going Medieval
Author: Hemito
Relevant for version v0.5.29.3 This is not described in the manual for the game., although this is a very important aspect of the game. In fact, the iron and steel bib differ only in strength.

By the way, you can do exactly the same with clothes and weapons.
There are also shelves for the doctor in the same room., but there just stack up some herbs and medicine, be careful, herbs suffer from fever, don't keep them there a lot, one shelf is more than enough.

First, make a U-turn under the house, like on a picture 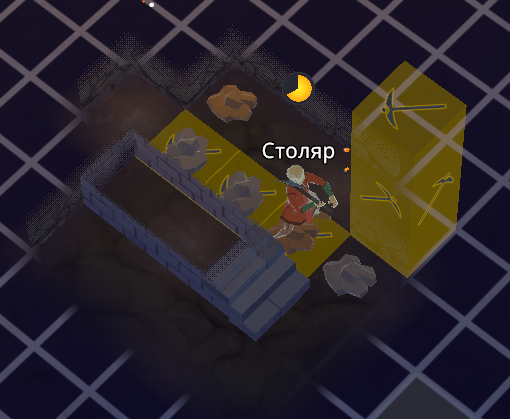 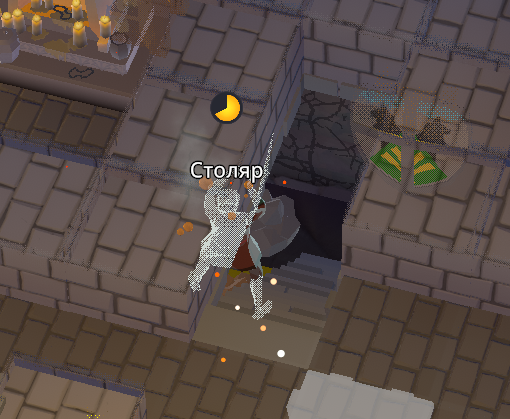 This is immediately followed by a door and a descent below, but do a little indent, to form a room, it is needed for heat transfer.
And also the passage, to the kitchen pantry (Where we have a shelf with food and beer). Make beams just in case. We will need this passage, to cool the pantry, to the state of frosty freshness, the higher the house is above the granite, the more effect you can achieve. 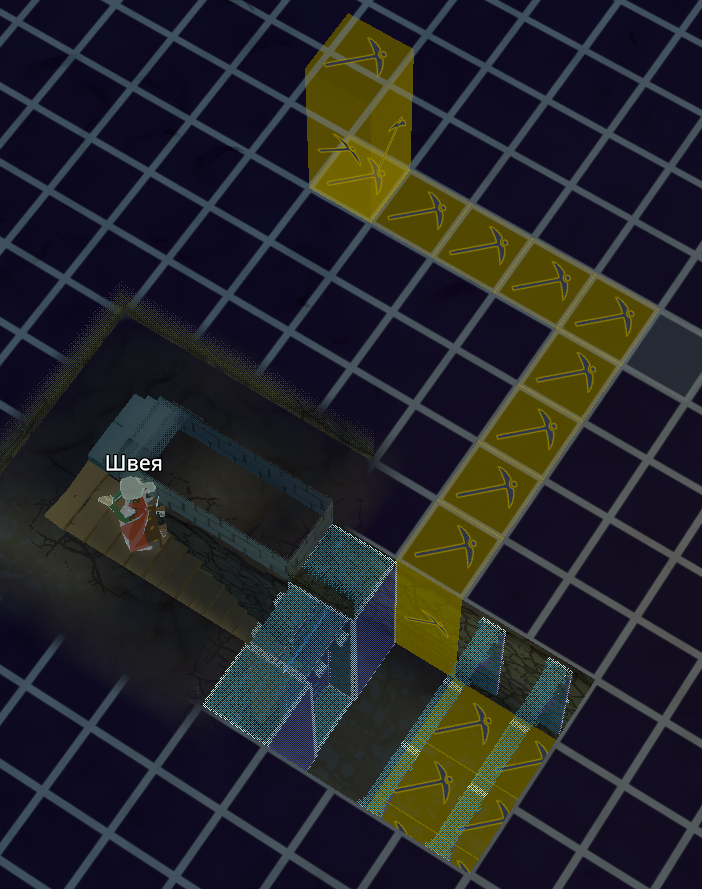 We make a move down at least three levels, creating mini rooms between them, generously wherever possible by placing beams. 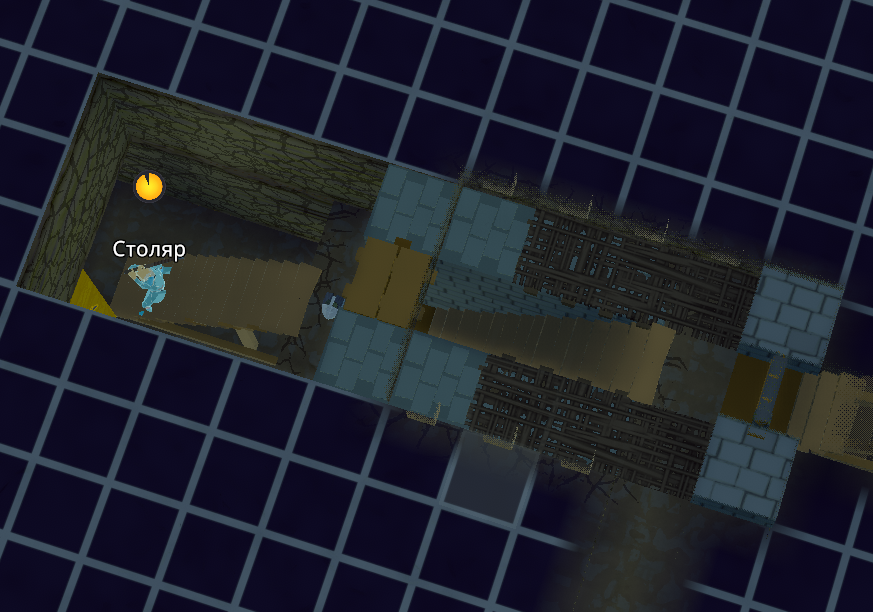 When you reach -4 floor we need to make a thermal well.
Just the descent is the very bottom, the easiest way is a pit 5 on 5 (Don't forget about beams)
Temperature inside one room, always the same, so roughly 2 degree Celsius can be achieved exactly, even with a heat wave, maybe lower 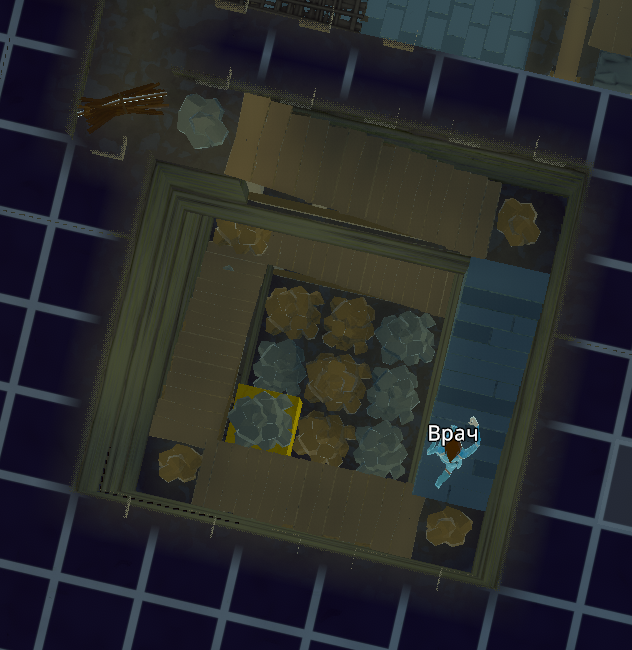 Then make a warehouse of absolutely everything, you can even in -1 floor, most importantly, do not forget to push the beams to the maximum.

Attention! This section is not included in the calculations, so additional resources are needed

First of all, you need to replace all external doors with reinforced ones. note, that despite the fact, that a lattice door is more expensive, it has less strength, its advantage, that you can shoot through it (At the same time, it does not have thermal insulation., which is really bad)
The second thing to do is the teeth with the mashicules. (This is one object in the game., prong).
An important point, the prongs can be placed in two ways, on the wall and in the butt to it, the difference is, what if you put them on the wall, then only teeth will remain, and the mashikuli will hide, thus, the settlers will be deprived of the opportunity to shoot down. I would still recommend the second option, since shooting under the door is useful. 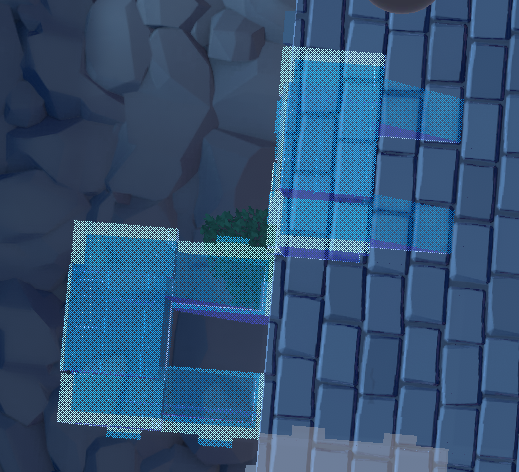 By the way, settlers can stand on the battlements, only if mashikuli are open (That is, the prongs protrude in front of), otherwise, they will just stand in front of them.
I made straight away from stone bricks, but you learn, in the future, we will still partially remove this. On the defensive stage II and III
And the last, what should be done, this is to arrange the exit to the roof (By the way, on the roof, you can organize a warehouse of stone and everything that does not deteriorate, if you really don't have enough space, by the way, I don't really like sloping roofs, you can't even walk on them) 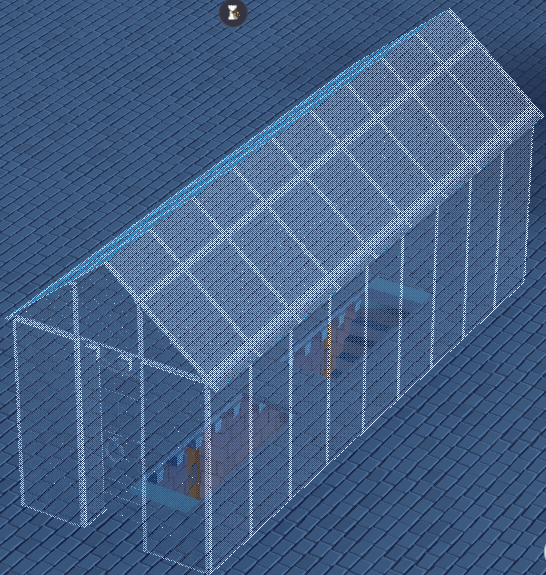 Not very elegant, but what you need.