ABSOLUTELY everything about Webber and spiders
– New character abilities;
– Briefly about farming and killing bosses;
– Types of spiders and where to get them.

Let's start off with, that recently, such a thing became available to our spider boy, as decoration of cocoons, which makes life much easier for other players, if you play as a team. 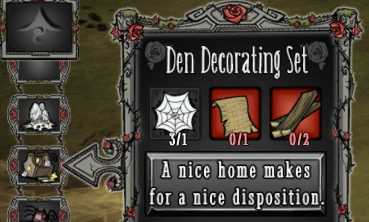 To use decorations, just take them in your hand and click on the required cocoon. 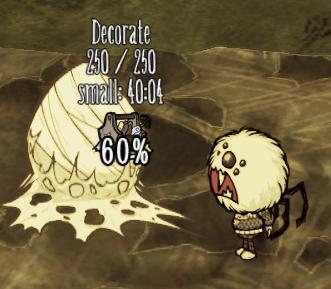 You can decorate cocoons of any level 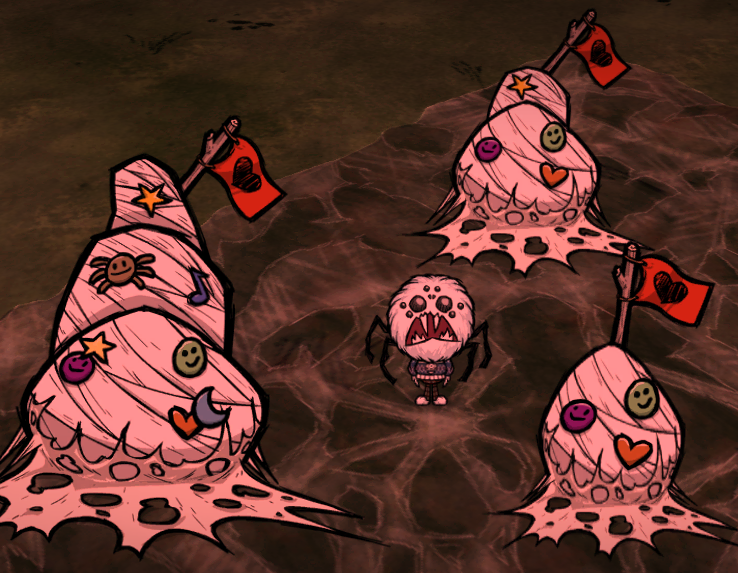 [What is the Difference Between Wild and Decorated Cocoons?]

1. Decorated cocoon takes up less space (because. less cobwebs on earth no matter, how big is it)

2. After decorating, spiders smile and stop attacking other creatures. !But if they attack, the decorations on the cocoon will disappear and the spiders will go wild again! 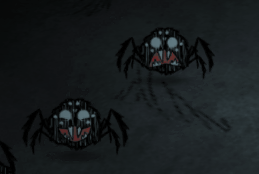 In this way, cocoons can be placed close to the base (preferably in neutral territory, where there are no other mobs, who can attack)
Spiders will ignore mobs, players, walls / fences.

Most useful ability of Webber – tame spiders. Easily assembled large army, where you can farm and use to kill bosses (but more on that later)

Now we will talk about ways to get a web., glands and meat.

Method number 1
If you are a pacifist and you are sooooo sorry to kill spiders, cobwebs can be obtained without extra blood. It is enough to cut the web from the cocoon, like wool with beefalo! 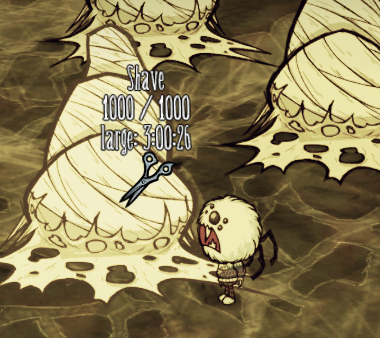 (!) Do not cut the cocoon all the way (leave 1 layer), otherwise it will simply disappear.

Method number 2
Fun + farm in one bottle. It is advisable to rotate WITHOUT decorations on a cocoon.
1. Place many cocoons next to each other;
2. Taming spiders
– More details –
Spiders can be tamed, just poking meat on it. By the way, tame several, or more precisely 3 spider (if there were still 2)
In this way 1 meat = 3 spider.
Gather a large crowd, but don't tame everyone, otherwise the massacre will not work.
3. Swing on a cocoon or spider.
4. Watch the battle. 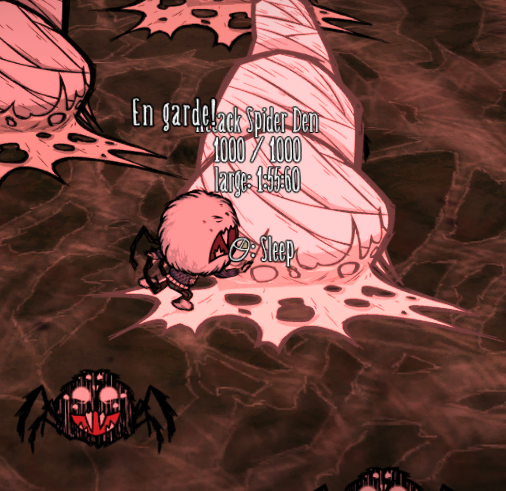 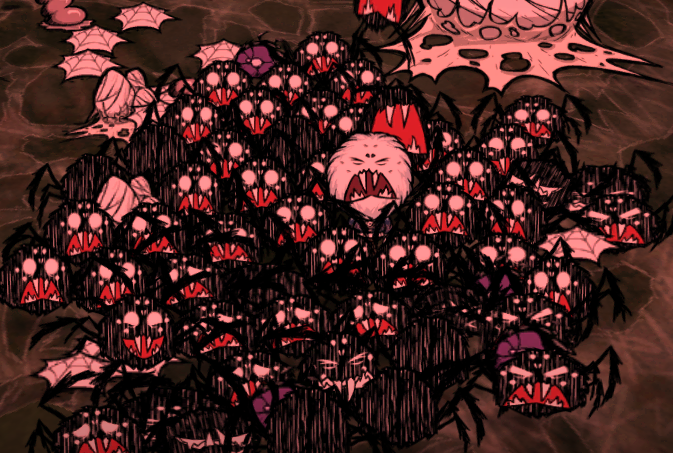 (!) It is advisable to just swing (do not carry the blow to the end, running off abruptly), otherwise it can fly in the ass.
(!) If you need meat in addition to cobwebs / glands, it is advisable to collect loot right during the war, because the meat is eaten instantly.

Preparing for the bosses
I'll tell you right away, what is desirable to attack bosses, which do NOT hit the area.
Cyclops-deer or Badger with their attack can simply destroy your entire unfortunate spider army at once. (Unless you have enough spider warriors, then you can try. In my humble opinion, it's easier to kill these bosses yourself, than mess with spiders, but it's your choice)
About Lutka. Since there might be frog rain in the spring, not sure, what is it worth spending on spiders for her. Feathers are urgently needed? Again, the choice is yours.

~ Moving on to more difficult bosses ~

Everything according to standard.
1. Shield lava lakes (not one solid wall, namely, each lake separately, it's more convenient to hit even if you were not a Webber and + no team, for the spiders to stop, they will follow the Fly and start crashing into lava lakes, actually – the army is gone)
2. Necessarily take Pan's flute with you (Since the Fly will start to attack in the area, affecting all spiders)
3. Of course, the army will not do everything for you, even if it is very huge. Take the armor, weapon, hilki and hit too.

The easiest way, for the lazy.
1. Recruiting an army. Desirable very a lot.
(It should have a lot of spider warriors and enough healers., about where to get the latter a little later)
2. For the most part, it is the army that plays a role, but take the armor anyway, weapons and sticks.
3. When you summon the Queen Bee, attack immediately, so that the army attacked her. Drones will always focus on the player, so you play the role of bait here.
While the drones fly after you – the spider army attacks the womb, actually, You just have to run and watch.

Sure, you can kill drones and join the army. The main thing is to watch your health, after your death the spiders will stop attacking the Bee and it will fly away.

Before, how to start, I will inform, what to make candies to transform one kind into another, not right away. First you have to tame (giving meat) the required type and only then will craft be available.

I think, talk about standard spiders (ordinary and warriors) there's no point. They can be found in any cocoon..

Therefore, let's start right away with a new and very useful spider. – hiller. 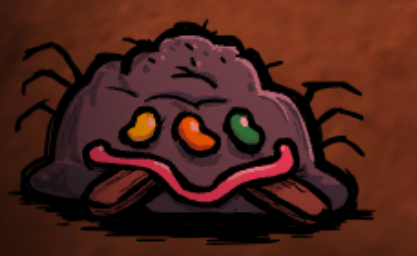 The only way to see this view – find the spider queen. (And maybe even a few, because this spider rarely crawls out)
Generally, finding him, we give meat and craft the desired candy becomes available. 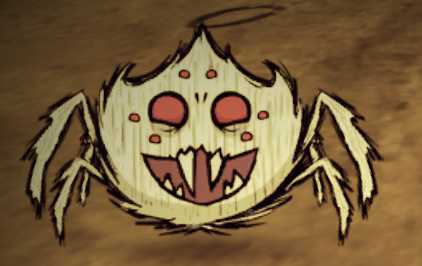 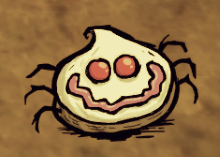 Stata:
[400hp]
[20 damage]
Peculiarity: like the warrior spiders from the surface, know how to jump on enemies from afar; sit on the ceiling, until the player / mob walks across the web floor, then descend. 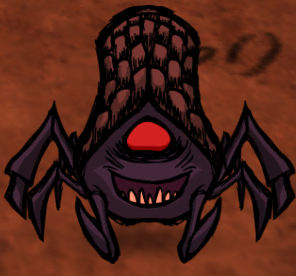 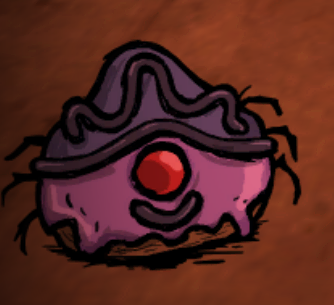 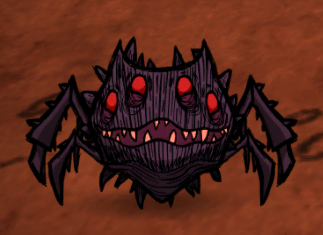 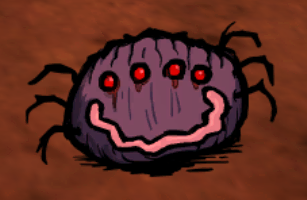 Habitat:
– the land of the spiders
– karst biome 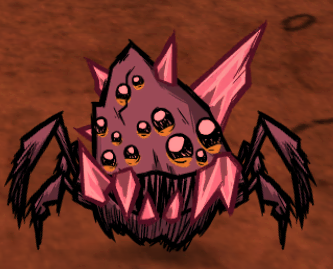 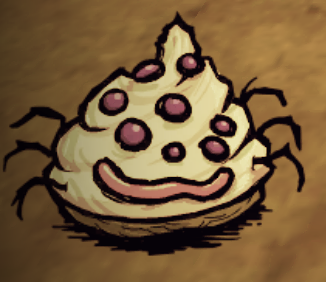 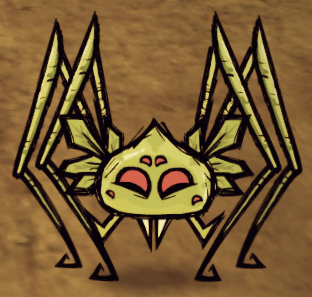 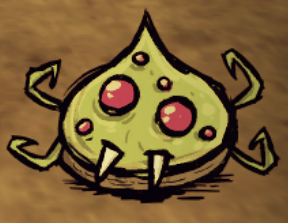