Hello, I'll tell you today, how do players get steel, what it is, and where do they get so much kuva?

First thing, what is steel, cook, and why is it needed?
Steel – some resource, rewarded for passing the steel path, which in turn opens after passing the full solar system of missions of the normal level of difficulty (That is all 233 missions). Teshin accompanies us on the path of steel, for completing each planet of the steel path, from him comes a letter with an attachment to decorate the orbit of that planet, which we went through, as well as 25 become, in total difficulty for all planets you can get about 450 become. 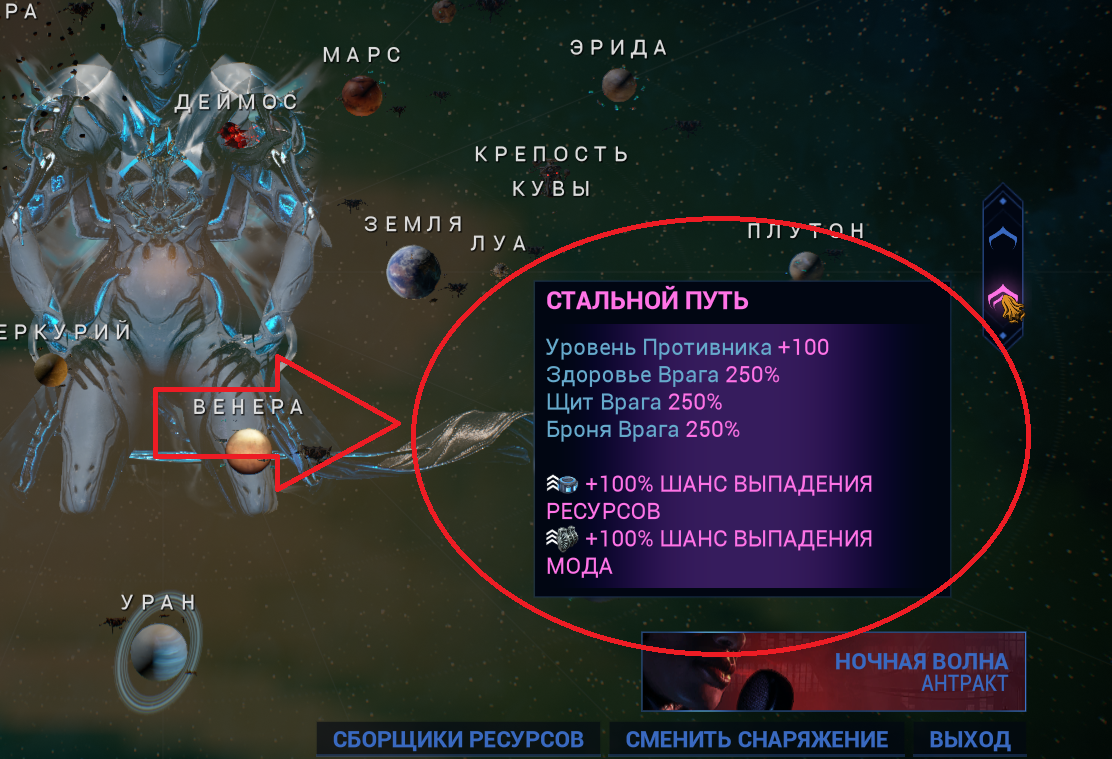 Another way to get steel is to do 5 daily missions, do everything accordingly 5 missions, get 25 become.

Steel can be spent on any relays in Teshin's shop (If you've already opened the path of steel), there are many attractive products in the awards, but we are only interested in Kuva, or 15 became on 10,000 Kuva.

Cook – resource, which you can get a lot in what places, it is required in the craft of some things or the main waste of kuva, is a reroll of rift mods. 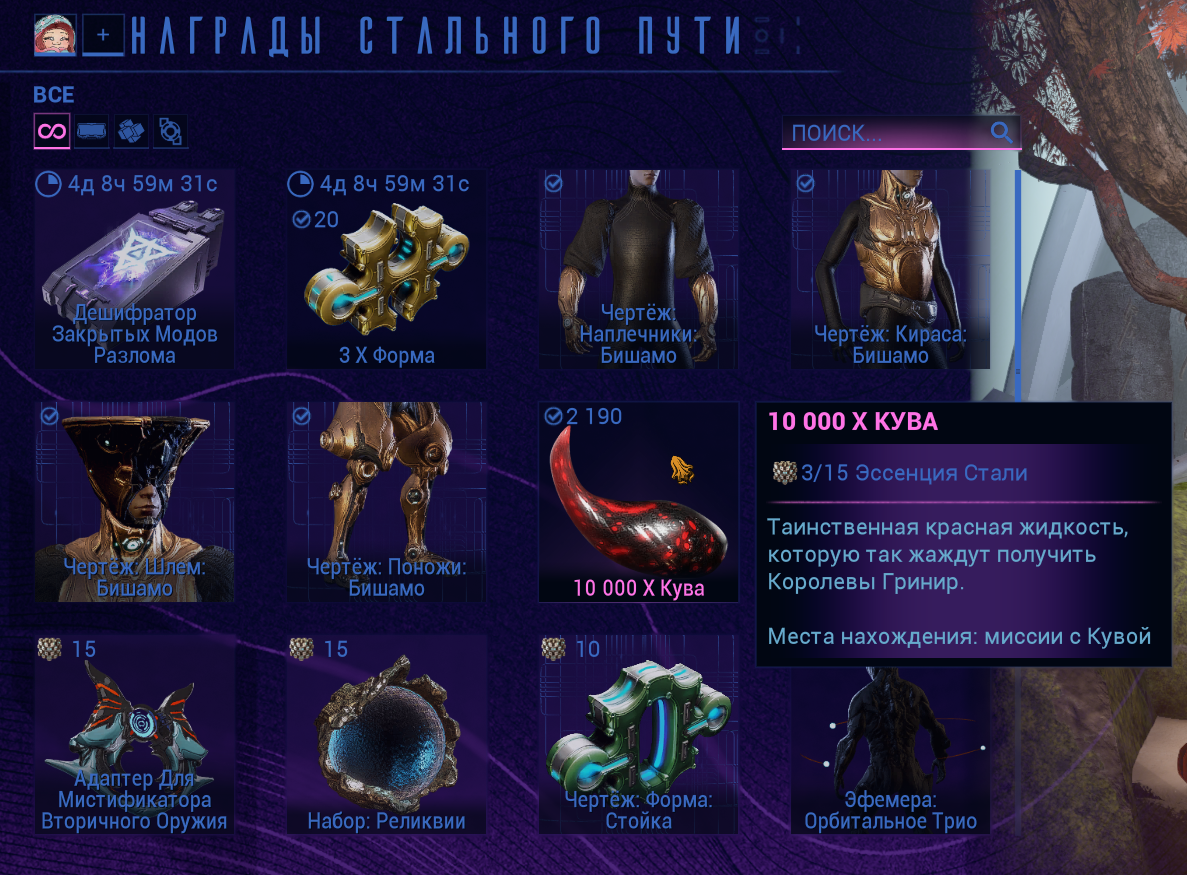 The main way to get steel in a team
Most often, steel farm on survival missions in a farm team of the next four frames:

1) Necros – skill “desecration” allows you to get more resources, and also increases the drop of life support capsules;

2) New(Acceleration) – build on “Acceleration” allows opponents to accelerate and run to you faster, to be killed faster;

3) Bark – puts a dome with an augment ult and kills enemies through the first skill;

3.1) Voban – from personal experience I tried to play through funnels(Ulta) vobana, it is also convenient to pull enemies together and kill at one point, if the whole team kills enemies;

4) In fourth place, I can put some kind of support, eg wisp in effect, or banshee in sonar, which will just make it easier for the team to survive.

Survival missions, I advise you to choose with the faction of the infected, since they are the easiest to kill and have practically no enemies, who have a ranged attack.

Necrosis picture, or press one button and stand in the AFK
Why is necros considered an AFK frame in this farm?? Because only one of his skills is required of him. “Desecration”.

Below is the build:

As we can see, he mainly needs the affected area. I also advise you to put the mod “Deprivation”, which allows you to spend health instead of energy, and fashion for energy efficiency, which allow you to spend less energy / health for desecrating an enemy .

If you want to appear even more helpful in the team, you can put a skill “Dispensary” from helminth, which will replenish allies with cartridges, additional health and energy.

Build new, or press the ult every 20 seconds
The game on a new one already requires a little playing time, or you need to press the ult every about 18 seconds. Many players are wrong, thinking that if new add radius, then her ultimate will move on, but it is not so, radius for nova affects only the radius of the explosion of enemies from the ult, range of the portal and range of destruction of the first skill.

New in terms of acceleration build for maximum utility, is the maximum duration, below is the build:

In a build for acceleration, it is important to put a mod “Overvoltage” and aura “Power transmission”, so that the power is less 100, which means the enemies will accelerate, rather than slow down. For survival, I advise you to put the mod “Molecular division”, which allows you to have infinitely 18 antimatter particles 1 skill, or each gives a resist 5% damage up to 90%, as written in the description of the skill (The number of antimatter particles also depends on the duration).

Bark build, or the most difficult gameplay of this farm
Cora is my least favorite frame in farming, but almost always you need it, since there is nowhere without her. Basic skills, which we will live, this is ulta and 1 skill. Ult will always have to live through, to keep control of enemies, but 1 skill you just need to spam… Someone, of course, puts macros on the push 1 skill, but I would not recommend using it as an account security.

Below is the build:

With the bark build, in principle, everything is clear., 2 augment to strengthen the whip and to increase the chance of a drop, a little affected area, duration and energy efficiency, power is not particularly needed, since the damage mainly depends on the melee.

It is advisable to put it close with maximum fault synergy, so that the rift mod gives the maximum increase in stats, the stats themselves on the rift mode are desirable damage, critical chance and critical damage amplification.

My build may be very different from bark connoisseurs, but I don’t argue, because I'm not a fan of the game with this frame.

Picture vobana, or spam funnels and shoot 1 point
My favorite of interceptions and mobile defenses, this is vauban, instead of bark, it is allowed to take it to farm steel, all that is required, this is to throw a lot of ults in 1 point and make sure that the duration of the funnel does not end, shooting the attracted enemies into 1 point.

Below is my build for Vauban:

Everything is smooth here, swing the duration and the affected area, not forgetting to put an augment “Repulsive Bastille”, which allows you to combine funnels into one duration up to 300+ seconds.

For a bonus, I advise you to use weapons with area damage, to kill as many opponents as possible, attracted by the funnel, in my example, I represent a build for ogris kuva:

For additional benefit, you can also set the skill “Dispensary”, to give yourself and your allies ammo, health and energy.

Picture of visp and banshee
Below I will present a build for wisp:

Based on the build, we do maximum strength to give a lot, be sure to put only red and green flowers, blue slows down enemies.

Banshees rarely farm, so I can only say one thing – spam the second skill and help to quickly kill enemies and novices of the stalker.